When I was very small, long before we were formally introduced, Crow would sometimes come to call wearing his fairy godmother disguise. This is one of those rare shots from the old family album where he can be quite clearly seen as we visited strange places that only Crow and very small children are able to behold. Parents may laugh to see their child chasing dandelion fluffs in the back yard but who knows what wonders may appear to those without preconceptions?

Imagination is a funny thing and not strictly a human prerogative. Do you know the type of dog that just keeps on barking and barking and, well, barking? The small but very noisy hero of this story is just one of those dogs. So, his owner invests in a collar which will dispense an electric shock if he barks.

Unfortunately for the poor dog this new gift coincided with some really momentous world events going on outside his little window:

Dog With Electric Collar from Steve Baker on Vimeo.

Steve Baker is the very clever Australian animator who won a Film Institute prize for best animation with this one.

win some, lose some 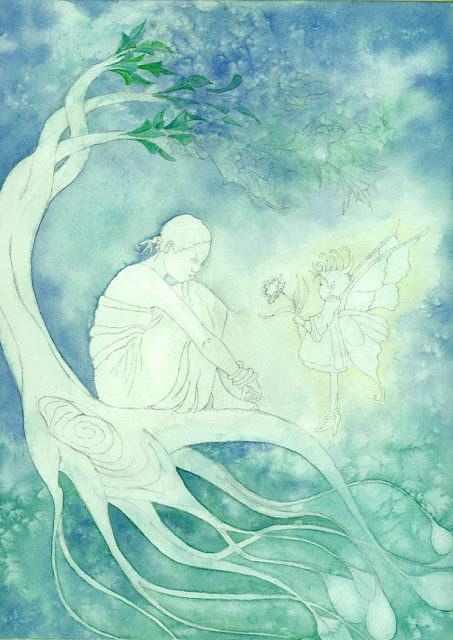 If you've been wondering what I've been up to since last time this is partly that. Since I'd had pretty good luck with the results of the last two paintings I decided to work on this one drawn a few months ago which you may remember. I love the image and want to get it just right but this is as far as it got before I threw it away. I could see some things were acceptable but realized the colors weren't what I was looking for and I had definitely overdrawn the leaves and flowers in the tree - impossible to erase once I'd laid in the first wash of color. So rather than spend many hours working on something I wasn't going to be satisfied with I decided to start over.

Maybe the next version will look more like this: I seem to have developed the funny idea that I have to put up a new picture for every post which is kind of difficult for me as I don't work very fast. Besides that I've been teaching myself a new way of painting these past four or five months. Old dogs can learn new tricks but it takes longer.


I think I'm going to have to find more silly stuff to talk about around here if I'm going to hold on to my blog party membership. For instance, a bagpiper was skirling outside the window a few days ago and I looked to see 50 or so cap and gowned graduates walking behind him down the middle of the street. It's a good thing this is a very quiet town so far as traffic is concerned or the country might have lost some PhD's.

Good too it was only one bagpiper as there were enough dogs howling as it was. 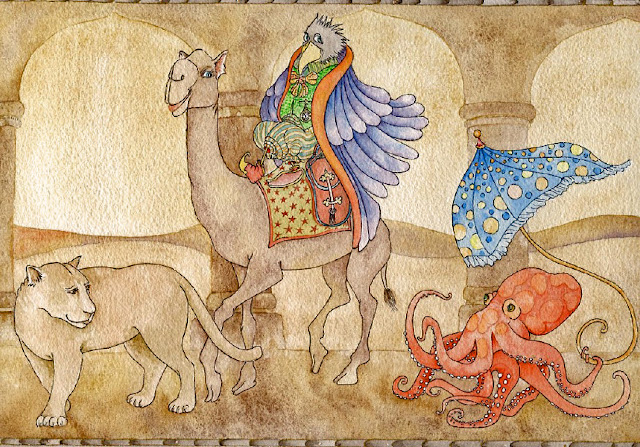 A few years ago I came across a concept in one of those ginormous space operas I sometimes read that amused me more than usual.

The idea was that people on earth at some future date finally got their act together, stopped having wars, cleaned up the environment, and made peace with all the animals. Ridiculous, I know, but we can dream. I hate it that I can't remember what book it was part of but I've searched my failing memory, searched the diminished bookshelves, and googled til my eyeballs ached without result.

As I recall it was one of the more minor plot points among a multitude of larger issues going on during the course of the story. Anyway, mankind had finally cobbled together a couple of starships and set out to explore the galaxy where they found, much to their surprise, a race of advanced humans who were part of a galactic civilization. It turned out that for thousands of years aliens had been dropping by earth and taking away small groups of people to planets where they could be introduced to polite alien society.

We keep looking and hoping for some sort of quantum leap toward planetary maturity all the while our leaders and power mongers can only involve themselves in wars and processes that lead to short term gains for themselves and continued self-aggrandizement. It's frustrating. No wonder I like science fiction

Next time I'll tell you about the books that postulate a superior and enormously powerful alien race who are Buddhists. They only allow beings who have never deliberately or accidentally on purpose hurt another sentient being to leave their own solar system. Any who attempt to do so die the second their spaceship passes beyond their star's gravitational influence. You have to admit it's a good way of keeping the neighborhood peaceful.

Anyway, it's Saturday night and getting a bit late here east of the east coast. I think Crow and his friends may be looking for some friendly aliens willing to take them and all their friends to a world that will be a kinder place for them. I wish them well and hope they'll invite us to go along.

picture a walk in Halifax

The spring weather around here has been colder, wetter, and foggier than is apparently usual according to the locals and it's raining again today. Last Friday was pretty nice so I took the camera along one of our usual routes and didn't take a picture until we were some blocks away from here.

I remember lots of virtual walks taken a year ago and not being any wiser about what Halifax looked like if it was indeed a city. Having lived in the south end downtown area for seven months we've come to the conclusion it's really better described as a large college town, one that has many interesting walks but fairly small and easy to navigate if you enjoy walking.

There's a cluster of bank skyscrapers near the old city center on Barrington St. but the street itself is mostly empty shop fronts and the facades of historic buildings with nothing behind. We didn't walk that way on Friday, nor did we go to the harbor front, the big wilderness park, or through any of the neighborhoods where the houses are grandiose. Instead, we crossed the street out front, went south and then west before I took the camera out: 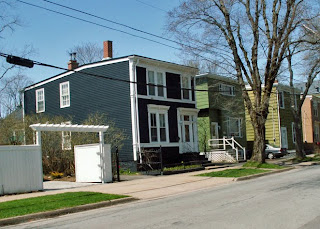 The first is a picture of some typical saltbox houses in a low-key neighborhood near the further end of the Dalhousie University campus. There's nothing special about them other than the fact almost every one you see is beautifully maintained. 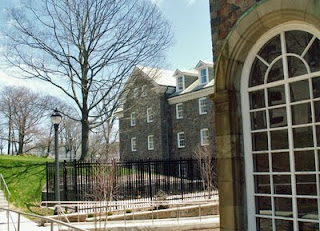 This is part of an older dorm on campus and the section on the right is a very beautiful old dining hall. We peeked in the windows to see the old furnishings are still there but the hall itself appears unused. 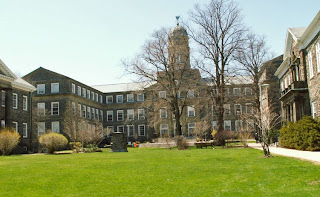 The original quadrangle of the Dalhousie campus, established in 1818 which makes it one of the oldest in North America. Very pretty on a spring afternoon and other days too. 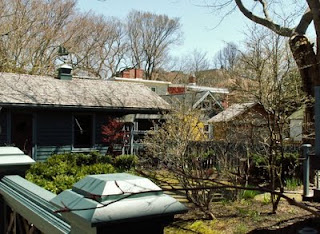 This is one of my favorite back yard gardens with a little studio cottage at its end. I wouldn't mind living here. A few weeks ago we saw a small and pretty house with a 'for sale' sign. When I looked up the real estate listing it was priced at $625k. 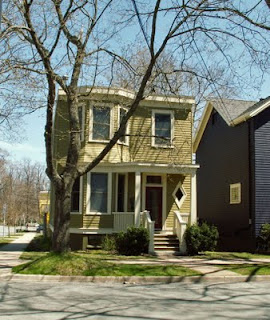 I rather like this house too but can't understand why there are so many without proper roofs. The sidewalk to the left leads to a large old graveyard.

(I refuse to take pictures of the 10-15 story apartment buildings that have been plopped into these neighborhoods.) 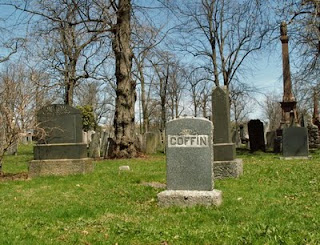 The Public Gardens opened a few weeks earlier than scheduled and it's very nice to walk along its serpentine paths again rather than on the sidewalks that surround it.

The last photograph, the one I posted first because it's the prettiest, is one of the ponds near the main entrance to Spring Garden Road. Our place is just a block away but we had to shop for groceries so I packed the camera.

One of these days I'll take it with me again so I can post more pictures and continue writing my impressions.

Let me know if you're bored. 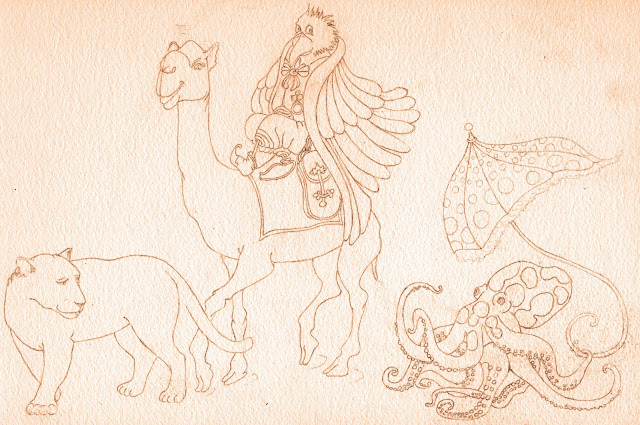 One thing about living in this out of the way place is that mail doesn't come very often or at any specified time. However, that which arrived today brought a letter from Crow he asked me to share with you:

Dear Friends,You may be curious about where I''ve disappeared to these past long months. I hope you'll accept my apologies with the understanding my new found companions  and I have been making great efforts on behalf of all the animals and good people in the world . What could that be, do you wonder? I will explain.During my late winter sojourn to ancient Aegypt I came upon a cartouche of profound antiquity which took me many long nights to decipher. It told of a path that leads to lands of unimaginable wonder where all can live in peace and harmony. I'm aware you may be skeptical that such a path exists but remember it wasn't that long ago most humans agreed the world was flat, that Earth was the center of the Universe, and man was the pinnacle of creation. We all know what became of those assumptions and who knows but there may be others that will be overturned as wisdom grows.As we search for signs of our route across this mighty desert I've taken a moment to send you fond greetings. There are trails to mystery and beauty in unexpected places, some of which you may have found yourselves. Always remember the journey itself is what brings meaning to the destination. In other words, enjoy yourselves and why not try something new (like a piece of fruitcake)?I will send further dispatches as space and shifting time lines allow. Meanwhile, I send my salutations.Crowps: susan will try to clarify yet another sun and sea damaged picture.

and that's his letter. I'm rather looking forward to hearing the rest of his adventure and sharing the details with you.

Best wishes and have a good weekend if I'm not back sooner.