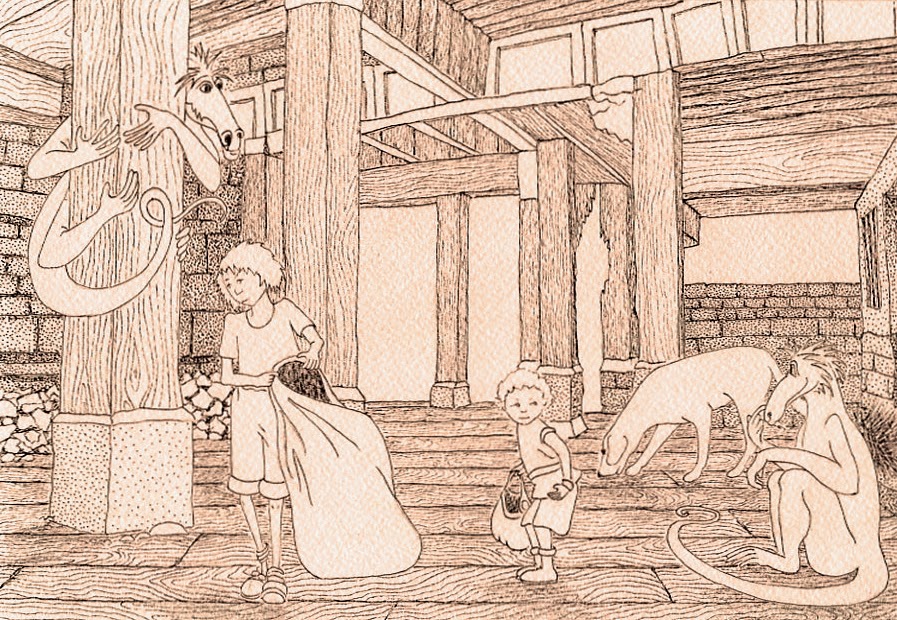 There's a story in here somewhere but I tend to go off on tangents even I don't expect - the story I was thinking of has no dragon-like beings. Even as this pair appear to be innocuous enough one can never be entirely sure about the intentions of dragons.

I may paint it, or I may just draw another. These days I'm having a hard time maintaining any creative focus. This could be blamed either on the weather (which has been wonderful) or on the news (decidedly not wonderful).

all at sea with Crow 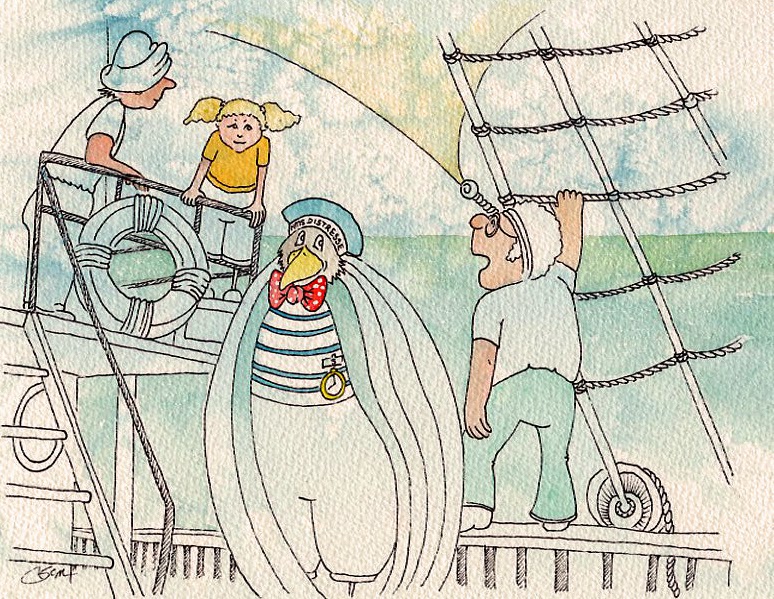 In April of last year I wrote about a young man from Holland by the name of Boyan Slat who had devised a plan to clean the plastic detritus from the gyres of the world's oceans. Crow, who is off enjoying his annual mid-summer circumnavigation, sent me a letter:

First the bad news is the garbage is still there - in point of fact, there's even more of it now than before. Young Slat’s plan, if you recall, is to deploy several V-shaped floating barriers that would be moored to the seabed and placed in the path of major ocean currents. The planned 30-mile-long arms of the V are designed to catch buoyant flotsam three meters below the surface while allowing my companions of the sea to pass underneath. “Because no nets would be used, a passive cleanup may well be harmless to the marine ecosystem,” he wrote in the feasibility  study. The idea is that over time, the detritus would flow deeper into the V , from which it would then be extracted. The report estimates that the plastic collection rate would total 65 cubic meters per day and that the rubbish would have to be picked up by ship every 45 days. Slat hopes to offset costs by recycling the material for other uses.

He's given me a picture of how one looks. I was delighted when I learned that the results of studies he and his team of researchers have done show that just one unit could remove half the plastic in the Great Pacific Patch. They've had great success with their first deployment and are now more than half-way to their goal of collecting $2 million for the next implementation of the plan.

I'm sure you'll agree to share this wonderful news with our mutual, and esteemed, friends. Now I'm off to visit my pelagic colleagues to let them know that help may yet come. The albatrosses, great auks and small, boobies, frigatebirds, gannets, murres, seagulls, penguins, petrels, and puffins depend upon clean seas. As do people. And fish. And sea mammals..

Warm regards to all,
Crow

ps: Please set aside some brandy and fruitcake to be shared on my return.

It's good to know there are people who don't take 'impossible' as an answer. After I read Crow's letter I found a few loonies down the back of the couch and made a small donation to Boyan Slat's website  The Ocean Cleanup. Whatever helps.
♡
Posted by susan at 6:40 PM 14 comments: 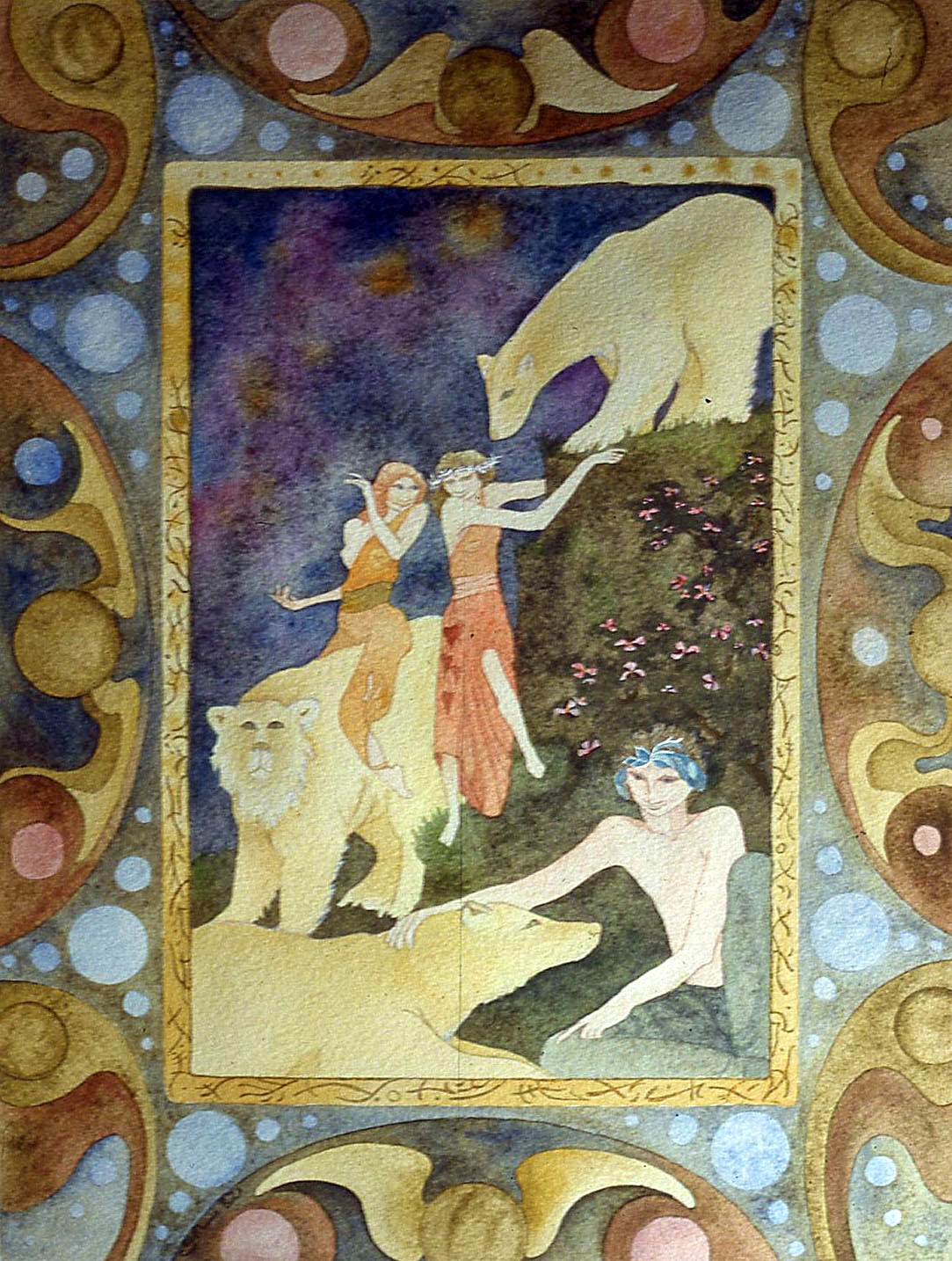 A couple of weeks ago while digging through some old photographs I came across an out of focus snapshot of a picture I painted thirty years or more ago. I have no idea why I had polar bears and their lady guides climbing down a grassy bank, nor what they're thoughts and plans are regarding the young man and the other bear, but it must have seemed significant at the time. Anyway, what I did see was at least half a dozen things I'd do differently now that I have a bit more skill using watercolors. The first thought that occurred is that they should be on their way back to a land of ice and snow - a far better environment for the polar bears than a mossy slope. The next was that the composition would be much improved by losing the guy and the other bear. 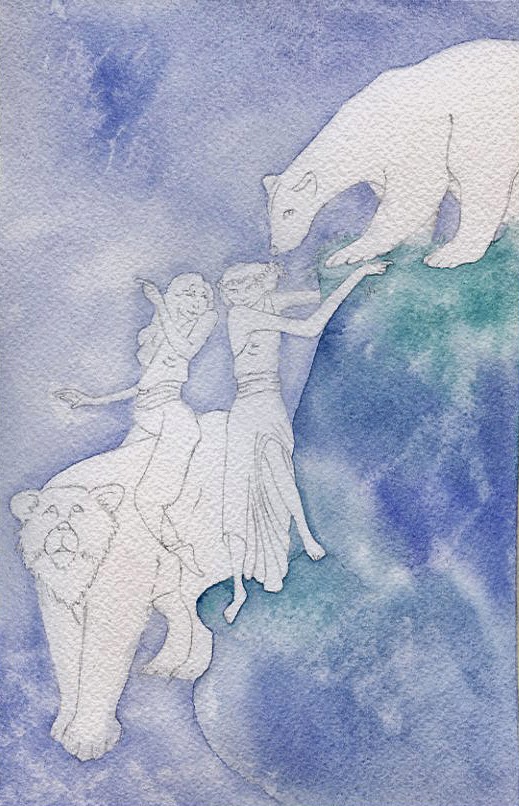 This is as far as I've got, and likely as far as I will get, with this project. Once I'd redrawn the picture and begun adding color it wasn't long before I realized I no longer had much interest in painting nubile young women riding, or otherwise interacting with, large and dangerous wild animals. What did I think happens when you try to hug a polar bear? Of course you know what happens, the polar bear isn’t going to be into it, and it’s probably going to try to eat you.

On the other hand there's a brave man named Kevin Richardson, a South African zoologist, who studies animals native to Africa. He's studied lions to such an extent that he seems to have uncovered the secret to not being mauled to death, as you will see. He has decades of hands-on experience studying how lions behave, and he was able to use that knowledge to his benefit (and ours) in an amazing way.

Now I shall return to painting Crow and friends - perhaps there'll even be one with an old lady :)
♡
Posted by susan at 7:42 PM 10 comments: