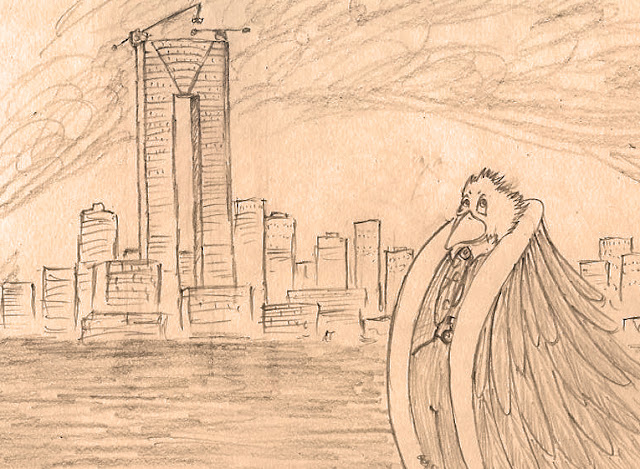 As usual, travel has broadened my perspective but, more and more often lately, I must shake my head in amazement at the vagaries of humankind. Weary-winged after my flight across the Mediterranean, I'd  barely alit on the bow of a passing sloop when what should I see but yet another monstrous edifice blighting this enchanting shore. What you see in this picture quickly snapped by one of the fishermen is the 47 stories tall Intempo Tower that rises head, shoulders, torso and thighs above its neighbors in what formerly was the tiny fishing village of Benidorn, Spain. What makes it eye-rollingly outlandish is that in their haste to construct dwellings more lavish than others nearby, the builders neglected to emplace elevators suitable for carrying people and their furnishings to floors above the twentieth. Yes, the developers decided to add twenty-seven floors to the original design without considering this seemingly essential issue for those born without wings.  Their response is a plan to add exterior lifts, but I can't help but wonder how the tenants will react to strangers passing through their bedrooms on their way to their own apartments.

This egregiously bizarre architectural anomaly only goes to prove my long held opinion that people are better off living closer to the ground. High-rises have become endemic in modern cities mostly as a result of the cheap and unimaginative mass production logic of big business. Just as there are famous brand name food purveyors on the corners most everywhere in the western world and beyond, so too are high-rise apartment and office buildings making your cities indistinguishable from one another. True, some of the buildings are entertaining to look at (mostly at night), but they are invariably inhuman in size and scope. Furthermore, there are problems inherent in skyscraping habitations that may not be apparent on first glance but, as energy prices continue to rise, we may yet see the renaissance of human scale architecture - the kind that still exists mostly in old Europe whose central cities are themselves untouchable monuments, but whose outskirts too have often been redeveloped - up. 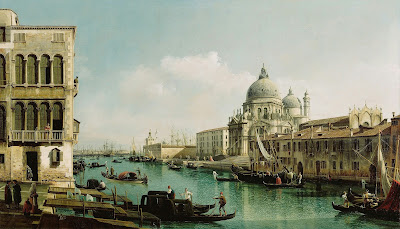 Here's a charming view of Venice painted by my old friend Canaletto in the days when nothing was taller than a church steeple.

Anyway, let me make a couple of points about why modern high-rises might not be the entirely correct solution to the way people live:

1. Wind speed increases with height. This isn't a problem for birds who may wish to migrate, but you might want to consider that if you open windows for some cross ventilation on the forty-second floor you may want to place bricks on any loose paper.

2. If your windows don't open, especially in a building with glass curtain walls, then on a hot day without power provided by cheap fossil fuels the temperature inside will rise to baking levels.

3. Water pressure to all but the lowest floors of a building will disappear during a power outage.

4. In a period of unaffordable energy costs, people would only be able to occupy floors as high as they could physically climb. For most people, that limit is four or five flights of stairs and may be less if you're carrying buckets of water.

In the long run I imagine skyscrapers might make excellent aviaries. Goodness knows, we birds could do with a break.

Salutations to you and all your compatriots. Please remember to keep the brandy warm and the fruitcake old and dry. I shall return soon. 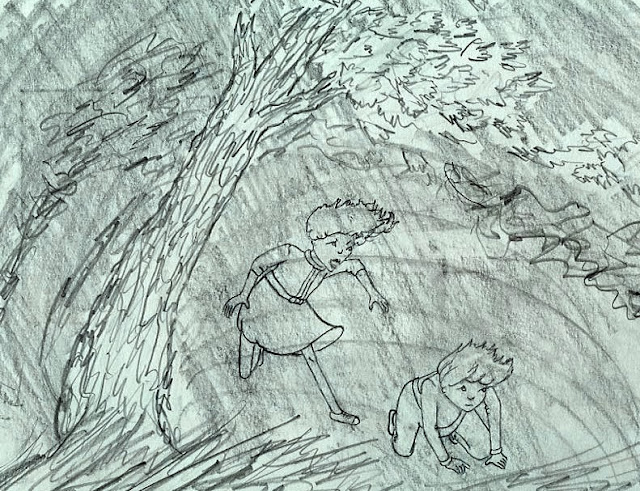 In October of 1954, a hurricane called Hazel hit Southern Ontario pretty hard. By that time my mother and father both had jobs in Toronto, 25 miles away from our tiny lakeside cottage and, as a determinedly solitary child (one who hadn't taken well to being babysat), I was a latchkey kid. Every morning at 6:30 they'd get in the car for the long drive to the city and would return at 6:30 in the evening. That was the routine.

As I recall it was late afternoon on a Friday that the storm began. Truth to tell I didn't pay much attention when the rain first started pelting the windows, nor did I notice the winds doing anything unusual. I'd done my few chores - dish washing, making my bed and peeling potatoes for dinner -  before looking at the clock to see it was almost 6:30. It was already too late in the year for seeing much outside the windows by that time of the evening but I squinted into the darkness anyway hoping to see the lights of the little Ford Prefect coming up the road. Nothing. Well, not quite nothing since wet leaves had already glued themselves to the glass at the front of the house.

An hour or more went by with me alternately looking at the clock and going back to the windows, more and more nervous with each passing minute. So I did what any normal almost eight year old would do and turned on the television to watch Topper - a family favorite show. If you remember that program it was about an elderly gentleman (Leo G. Carroll) who was visited by the amusing and sophisticated ghosts of the couple who had originally owned his house. Since they'd died in an avalanche, an alcoholic St. Bernard who'd expired trying to rescue the Kirby's also provided some fun by lapping up any martinis he found. As it was only Topper who could see these characters he was always left to explain the strange happenings. Maybe you had to be there.

Anyway, five minutes into the show the lights went out in the house. Not only had the storm not blown over as they usually did, but it had got worse. While I was still waiting for my eyes to adjust to the dark I heard very loud banging at the kitchen door followed by the entrance of Patricia, a twelve year old neighbor who said I had to come to her house. I really didn't want to leave but she said she'd drag me if I refused. The back door that slammed into the outside wall when we went outside took both of us to close. Then it turned out I couldn't stand up in the wind so had to crawl the hundred feet or so to her house while branches and everything else that wasn't nailed down blasted past us. After Pat tripped over a rolling log she stayed down and crawled the rest of the way with me.

At least there were candles lit at the neighbor's house but I couldn't eat what was offered. A pair of clean pyjamas exchanged for my wet clothes made me more comfortable, but I refused a shared spot in bed with the girls and instead, went to sit by the kitchen window to watch for car lights. By then I was badly frightened that I'd never see my parents again and wondered what would become of me. England and the aunts, uncles and grandparents who lived there were very far away and not well remembered. A few miles away was the Loyal True Blue and Orange Home, an orphanage for children whose parents had been killed in the war, or so I'd been told. I didn't think I'd like it there.

So passed a long and lonely night. Although I didn't cry because I didn't want anyone to hug me, I did feel sick and bereft. I must have fallen asleep on the chair because when I looked outside again it was a clear, calm morning. Before anyone else awoke I was out the door running home. Even now remembering the joy and relief I felt seeing that little black car parked next to my house brings a lump to my throat. 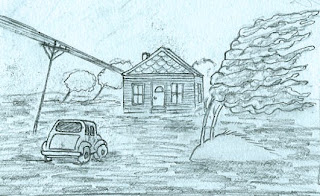 It had been a terrible storm that saw bridges washed out, trees falling to block roads and rivers overflowing their banks, but my father drove the high riding Ford Prefect through farmer's fields and along graveled back roads to make it home by dawn. We had breakfast together, Mam, Dad and me, and then I went out to play with my friends in the lake that had crested at the bottom of our road. I think my parents went to sleep.