mirage or no from Crow 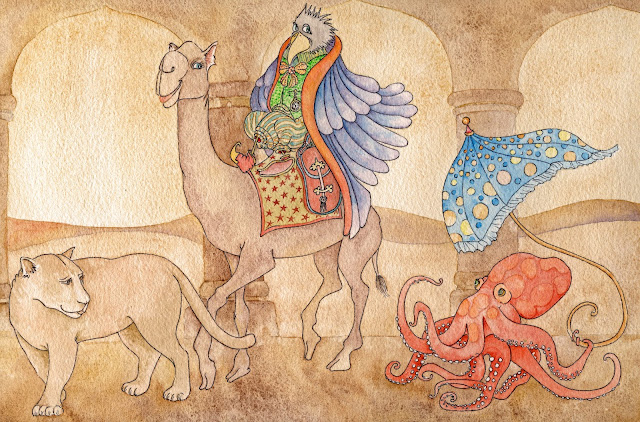 You may be curious about where I've disappeared to these past long months. I hope you'll accept my apologies with the understanding my new found companions and I have been making great efforts on behalf of all the animals and good people in the world. What could that be, do you wonder? I will explain.

During my late winter sojourn to ancient Aegypt I came upon a cartouche of profound antiquity which took me many long nights to decipher. It told of a path that leads to lands of unimaginable wonder where all can live in peace and harmony. I'm aware you may be skeptical that such a path exists but remember it wasn't that long ago most humans agreed the world was flat, that Earth was the center of the Universe, and man was the pinnacle of creation. We all know what became of those assumptions and who knows but there may be others that will be overturned as wisdom grows.

As we search for signs of our route across this mighty desert I've taken this moment to send you fond greetings. There are trails to mystery and beauty in unexpected places, some of which you may have found yourselves. Always remember the journey itself is what brings meaning to the destination. In other words, enjoy yourselves and why not try something new (like a piece of fruitcake)?

I will send further dispatches as space, time and shifting sands allow.

Meanwhile, salutations to all, 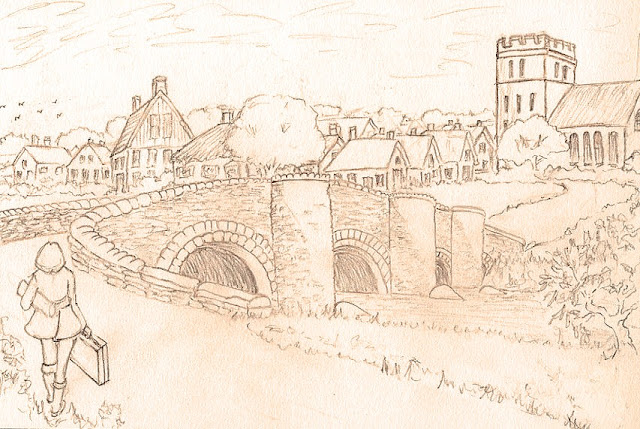 It's been a while since I've written about the train journeys I enjoyed when I lived in England in the mid-1960s. In those days the railway was still the most convenient and relaxing way of traveling around the countryside and one of my primary reasons for doing so at the time was that I had become interested in brass rubbing - similar to coin rubbing but on a larger scale. Commemorative plaques installed on stone floors of churches between the 1300s and the 1700s, the brasses are elegant and detailed portrayals of people in the medieval period - important people, that is. By the the time I got interested in making some reproductions of my own many of the churches that housed the monuments had stopped allowing people to make the rubbings at all because brass, being a fairly soft metal, is easily damaged or simply worn away.

So while many churches in the south of England had banned the practice ministers outside large urban areas were frequently more amenable. Since it wasn't a good idea to simply walk in carrying the rolls of paper, wax and weights (to hold the paper down) I wrote letters to request permission and to determine an acceptable date. Once that was done I'd plan my trip.

Probably the most interesting of my expeditions was the day I arrived at a tiny village that was home to a very old Gothic church. A young minister met me at the entrance and showed me into the nave where shafts of light from the arched windows created patterns of light and shade. The brass I'd come to reproduce, a knight in full armour with a greyhound at his feet,  was to the left of the altar. After dusting the piece carefully I positioned the paper and set to work transferring the image under the fascinated gaze of the minister. A little later while he related the history of the church he paused for a moment and asked if I'd like to see something special. Naturally, I said yes. He asked me to help him move a couple of wooden pews to one side and then he rolled back a carpet. There I gazed upon one of the most beautiful and intricate of the monumental brass memorials ever made. 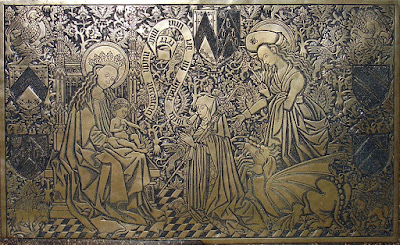 and no, I didn't even ask of I could make a rubbing. Seeing it was enough and having seen it was a very special moment for me. I think many people have accepted a very unfair description of the medieval period by calling it the Dark Ages. There was much in that time that was worthwhile - such artistry as the old churches attest both in their building and decoration required time and peace of mind in their creation.


“I don't suppose there has been a moment in the world's history where more people felt themselves to be artists, or when less art was produced."
~ Auberon Waugh