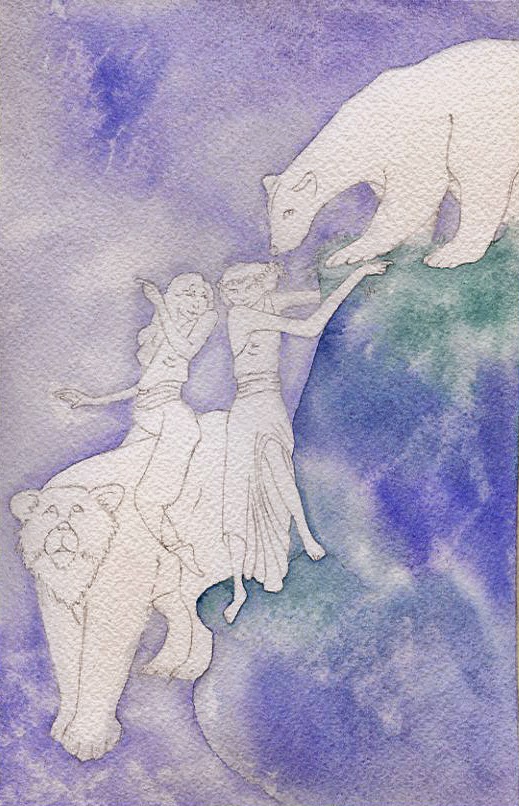 This particular unfinished (and since trashed) picture pretty much sums up where my creative process spent December. Stuck in limbo between one project and another I'd decided to relax by redrawing and painting an image I'd done many years ago. The only record I have of the long gone original is a small and faded photograph. This time I thought I might replace the main figures in a magical wintry landscape as the whole idea of polar bears in spring seems anathema to me now. What could I have been thinking? Quite obviously, from all we've learned about the problems of human assisted global climate change, I knew nothing back then. Anyway, there were several versions of this that I tried - each one worse than the last - and none worth keeping.

Still in the midst of being deeply sad about things I can't change I visited the blog of one of my favorite modern scientific philosophers, Bernardo Kastrup. His most recent book called 'Why Materialism is Baloney' will be  on it's way here soon. Here is the poem he posted a few days ago that I hope you will like too:

The Legacy of a Truth-Seeker

Having trodden the path for cycles uncountable,
Having crossed the ocean of mind from end to end,
Through all veils, its fountainhead have I finally seen.
To you, honest truth-seeker treading the path behind me,
I grant the gift of my legacy.

I have learned thus:

Experiences are self-referential tricks:
They arise from nothing and are made of nothing.
If you dig deep enough within yourself,
You shall always find the layer of self-deception
Upon which any one of your convictions ultimately rests.

The honest search for truth annihilates its own subject
Slowly, recursively, from within.
Having peeled away every layer of self-deception within me,
I have found myself to be like an onion:
Nothing is left.

Only nothing is true.
No external references exist, no outside arbiters.
We are self-created fictions and so is the cosmos.
Truth-seeking is the path to self-annihilation
And thus to liberation.

But beware!
As a dream allegorically portrays the inner state of the dreamer,
As a novel insinuates the aspirations of the writer,
As a lie betrays the insecurities of the liar,
So the fiction you call reality reveals something about truth.

Thus pay attention to life,
For truth expresses itself only through its own fictions.
To discern truth in fiction: here is the cosmic conundrum!
To engage wholeheartedly without being taken in: here is the ultimate challenge!
To find meaning in nothingness: here is the epic demand of nature!

Watch reality as you watch a theatrical play:
With inquisitiveness and curiosity.
But watch it as audience, never as character.
Characters spend their lives chasing their own shadows,
Whereas audiences attain subtle insight.

May my legacy serve you as a warning, but also as encouragement.
The prize at the end of the path is handsome:
The freedom to make the deliberate, guiltless choice
Of which untruth to live.
Exercising this choice wisely is the art of life.

This is a message I need to remember. Happily, in the past few days my creative abilities (such as they are) seem to have returned, making it likely the next picture installment of the girl, her dog, and the two weird dragons will appear next time.

Best wishes for the New Year.
♡ 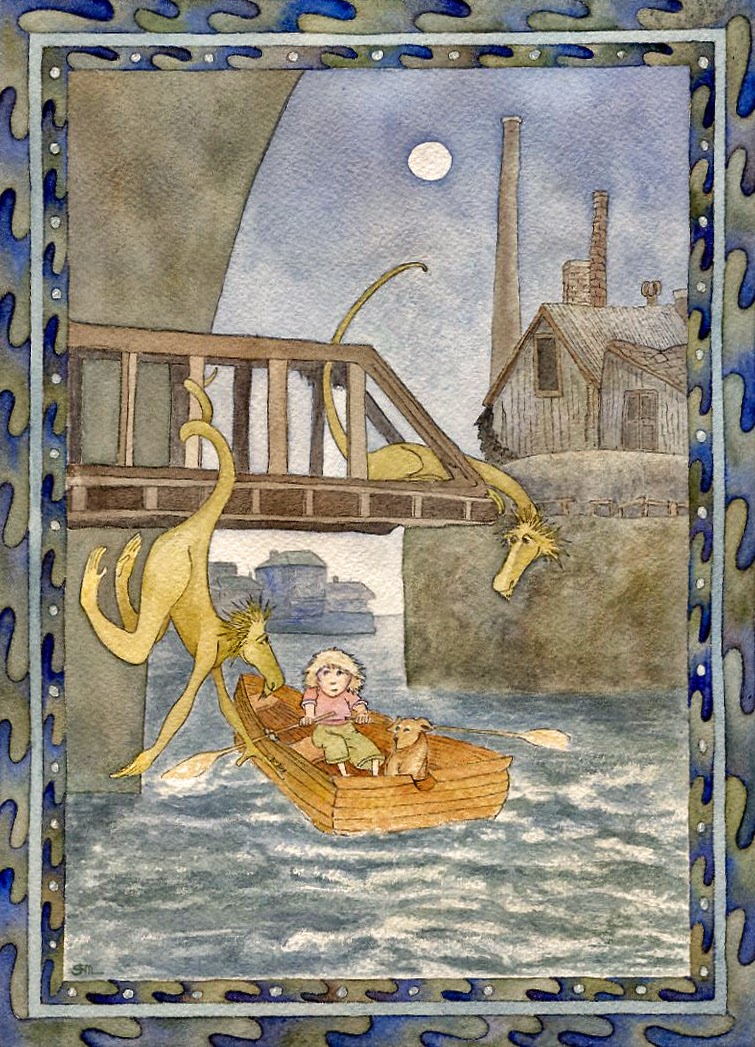 Sometimes these things take longer than I expect they will but now I can show you the latest illustration from the annals of my unwritten story. If it's any help at all, I'll also mention the pictures are in no particular order. You may remember the boat from 'Turbulence' - this is before that :). For the time being this one will be the last of them as I'm planning to get serious about a different story - one with a girl but no dog and no dragons either. Well, in actuality there is a dragon in the story I'm thinking of, but rather than being a smallish, curious dragon like one of these, he's a much larger and more ferocious member of his species. Don't worry, you'll see the pictures as they develop and likely a picture or two of Crow as well. He starts to feel neglected if I wait too long between portraits.

Now we're in those last days of the year leading to the shortest one - in this hemisphere anyway. I don't know about you, but I always feel much more relaxed once it's all over and we can begin looking forward to longer days and shorter nights even if it is freezing cold outside.

I won't bother mentioning the bad news of the past week or so (call me a coward if you like), but the good news I read a few days ago is that the Masai people of Tanzania won't have to move off their land after all. I was shocked to read a few weeks ago that the that the Tanzanian government had reintroduced plans to forcibly relocate 40,000 pastoralists to make way for a luxury hunting and safari company based in the United Arab Emirates. Unbelievable. We can only hope that the next step will be to give the Masai permanent rights to their land.

We are a strange species, but one that's capable of extraordinarily beautiful achievements too.