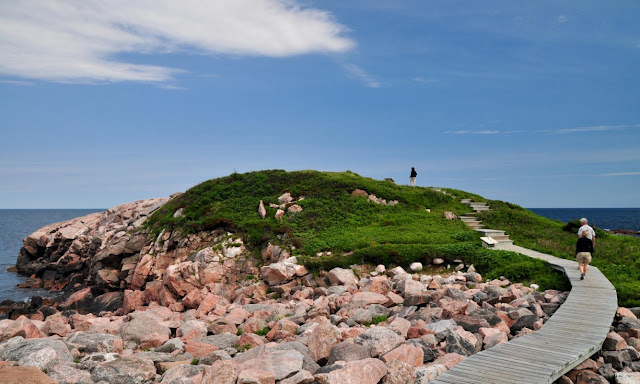 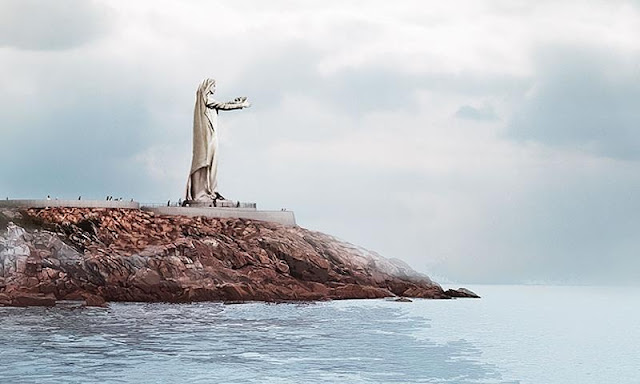 Stephen Harper has decided it's a good idea to build a 10 storey Colossus memorializing Canada's military history along the rugged, windswept coastline of the Cabot Trail, Cape Breton, Nova Scotia. The statue will be part of a proposed "Never Forgotten National Memorial" inside the Cape Breton Highlands National Park.

The plans for the memorial, brilliantly conceived by food-packaging baron and "enthusiastic patriot" Tony Trigiani were described to the Globe and Mail:

Mr. Trigiani is planning to place a "We See Thee Rise Observation Deck" in front of the Mother Canada statue, and behind it "The Commemorative Ring of True Patriot Love," a low wall featuring metal plaques naming the international cemeteries where Canadian soldiers are buried. He's also planning a "With Glowing Hearts National Sanctuary," as well as a restaurant, souvenir shop and interpretive centre.

Siting any structure in a National Park sets a precedent that calls into question the very reason to even have National Parks. If a consortium of wealthy individuals can ride roughshod over the Parks' legal protections, then the Parks are no longer safe.

The names of the fallen will not be commemorated by this monument - only those of the sponsors will appear, carved in stone. That is, after all, the incentive for getting them to contribute in the first place - it is there, for all to see, on the official website. They are paying to have their name and/or brand immortalised on this so-called 'monument', while the names of those it is meant to honour will not be. That isn't patriotism, it's marketing, and to use the dead to sell stuff is an insult to their sacrifice. A monument should remember those who sacrificed their lives for their country, not those who sacrificed a small proportion of their disposable income for brand awareness. 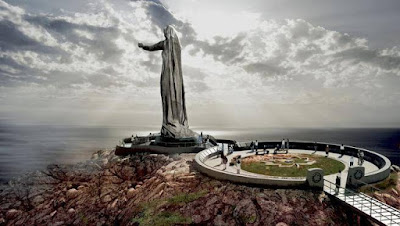 Just in case you need to know more about this project there's more news here. Meanwhile, I'll leave you with just a few of the hundreds of comments made to the Guardian:

* Not to mention the I-Love-Me Harper Hall! Plus, what names! What grandiose, egocentric, egotistical megalomaniacal names! What typical of tyrannical regimes names! Amazing the approach is not being named the Avenue of Glorious Leader Harper!

* Sitting Bull and other Lakota described Queen Victoria as 'Grandmother England' and thought of Canada as a place of sanctuary - just stick a big statue of Victoria facing the US.

* They should build a statue of a giant oil sands truck and call it "mother of all fuck ups".

* Perhaps instead a statue of Pierre Trudeau doing his pirouette? A monument to the last Canadian prime minister with any real character or brains.

* Interesting to compare the triumphantly open-armed Mother Canada with the bowed and grieving Canada Bereft Vimy memorial, which at least makes the point that war is a desperately sad business. An example of a new mood of sentimental jingoism, now that WW2 is more than half a century away.

* Meanwhile about 120 First Nations communities in Canada are on boil water advisories, some for as long as 20 years. Typically the Harper government would rather spend our tax dollars on self congratulatory projects like this than improving the third world conditions of Canadian First Nations living in one of the richest countries in the world.

* A final insult to the east coast before Harper goes. To sell out national parkland to a private enterprise for such a stupid idea is just plain wrong. You're not allowed to pick a single flower in these parks and he wants to pour concrete all over Green Cove. The gratitude we have to our fallen soldiers is felt by all, but to use our sentiments to sell this piece of tacky schlock is pathetic.

* This is not the only oversized piece of controversial memorial "art" that Harper's Conservative government is working on. They are going to build a massive "Monument for the Victims of Communism" outside the Supreme Court building on Parliament Hill.
No indication where the "Monument for the Aboriginal Victims of Canada" is going to be located, thus proving that it is much easier to commemorate other people's victims.


* I think Cape Breton needs a 100' statue of the McKenzie brothers, hockey sticks draped over their shoulders, a beer in the other hand of course, and big smiles showing the requisite 3 or 4 missing teeth. Now that says everything about the Canadian psyche that needs to be said...eh? 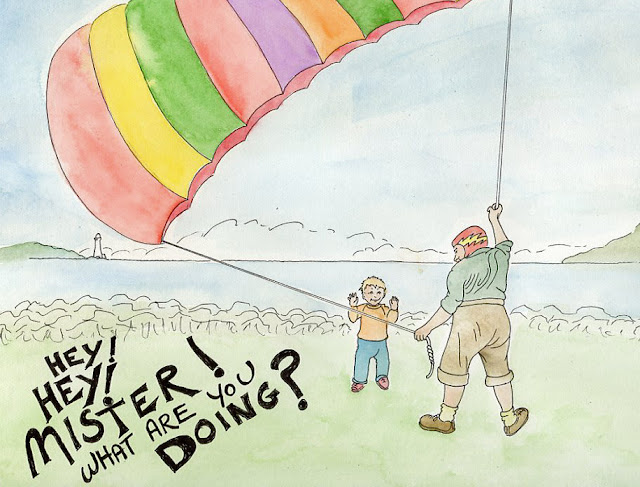 A walk in the park is never boring but usually we see things we expect to see - people, dogs, squirrels, crows, bluejays, chickadees, gulls, clamshells, crabshells, flowers, grass, trees, the sea etc. You get the idea. Sometimes we see the unexpected. One day last week we came across a scenario just unusual enough that I have to share it. Unfortunately, since I'm not in the habit of carrying a camera you'll have to settle for a more elementary image.

That day, after passing through a narrow section of the beachside path between some old wwII bunkers, we were surprised to see an older man standing on the shore holding the ropes of a very large parasail*. In actuality he was wearing a harness, knee pads and elbow pads as well as the helmet, plus there were a few more ropes. I hope you'll excuse me being a bit too lazy to draw all that. He did look a somewhat worried. I don't know if you're familiar with the sport of parasailing - I'm certainly not - but what I do know is that the general idea for getting up in the air is as follows:

You want to begin by standing high up on a reasonably steep grassy hillside with the sail spread out on the ground behind while a fairly brisk wind blows up the hill. The pilot then grabs the ropes in the prescribed manner, runs forward, throws his hands high over his head, and, if God is merciful, the glider inflates - floopf. A brief downhill run and the pilot feels the earth dropping away under him. He is flying. Unless, of course, he crashes. The flying and landing parts are beyond the scope of my story.

The man we saw wasn't doing any of that. Instead, he was holding tight to the ropes as the parasail (about 30 feet across and therefore much bigger than I've drawn) shuddered above him in the breeze. The fact the breeze was blowing out to sea might have been part of the reason he looked worried.

We'd barely had time to take in this unusual spectacle before a little boy out walking with his mother caught sight of the man and his apparatus. Transported by sheer delight the little guy ran laughing and shouting across the grass, 'Hey! Hey! Mister! What are you doing?'

We kept walking and the little boy went back to his mother. I turned back to see the man spreading the parasail on the grass in preparation of folding it up. I wonder if he's found a suitable hillside?

Before man walked, he yearned to soar, as if on feathered wings. Ever he has sought, in supreme affirmation and ignoble pride, to float upon the wind, high above the mute and pitiless ground. Icarus lives in archetype: Children remain convinced a bright cape will let them fly like Superman.

♡
* references to parasailing should probably say paragliding
(thanks, Lindsay) 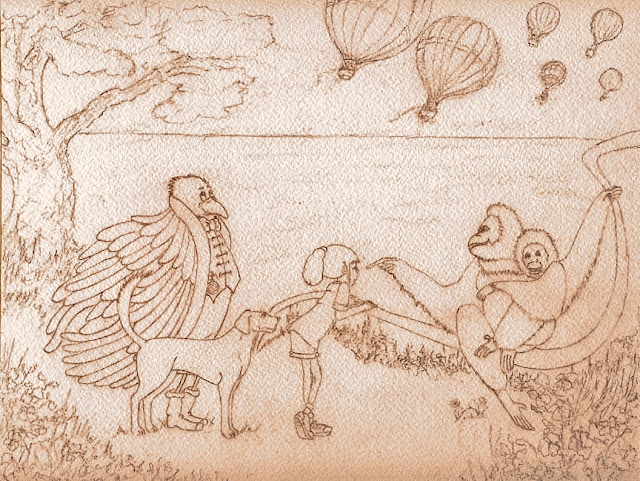 Crow came across this postcard in his files a few days ago. It's one I hadn't seen before and neither of us can remember if it's from his past or his future. I'm hoping the future.

While humans have been inventing things ever since some enterprising  homo habilis first knapped a flint then figured out how to rub two sticks together, it's definitely true the pace picked up over the last few hundred years. Crow, who had a front row seat at many discoveries, regaled me with stories about developments he witnessed:

'As I recall, it was nearly five thousand years ago in Sumer, when a bored farmer decided to improve the performance characteristics of his oxen-driven plow by getting rid of the plow and yoking his team up to a platform on wheels. The new vehicle, the first chariot, was a novel source of fun for many centuries until the people began to realize that these chariots would go no faster than an ox could lumber. About 2500 BC, people began importing wild asses from western India and yoking them up to their chariots. The history of the chariot, and non-human powered vehicles in general, has been a steady quest for speed. In the millennia since that time, there have been quite a number of these wild-ass innovations - some, obviously, better than others.'

All of that in just 75 years. For some reason what came next doesn't seem all that impressive in comparison. Then again, it's not easy to see the nano in nanotechnolgy.

If you could choose just one of these two inventions, indoor plumbing or the Internet, which would you choose?

I think I know how I would answer. 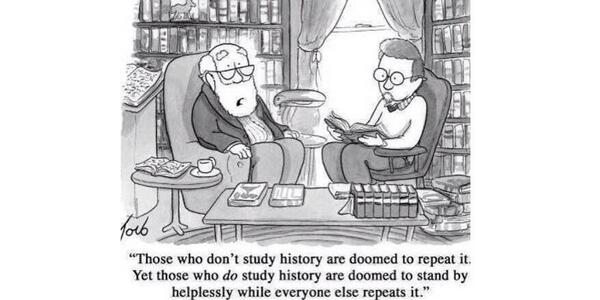