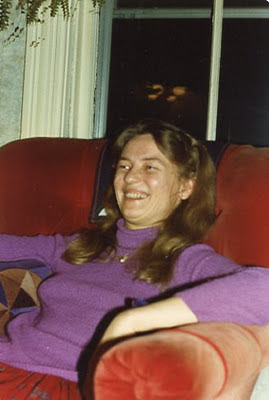 It was just a week ago I got word that one of my closest friends had died quite suddenly and most unexpectedly. A few days earlier we'd spent an hour on the phone talking about whatever occurred to us as the clouds blew past our separate windows on our shared planet. There were never planned times for talking but every so often it would occur to one or the other of us that it would be a fine time to hear the other's voice. Our conversations, Inger's and mine, were more like duets of love, laughter and shared impressions of whatever was occurring in that moment or something we'd seen or noticed previously suddenly remembered.

When I first met her in Montreal she was a master weaver from Sweden. Years later she had become a Sufi living in Philadelphia teaching peace and loving kindness. More than that it's almost impossible to describe the 40 years we shared.

Yes, I've mourned her absence this past week and will for a long time to come. Here on Earth Inger was the most gracious and beautiful person I've ever known but, all in all and all things considered, there was no one more prepared to step away at a moment's notice. I will love her always. 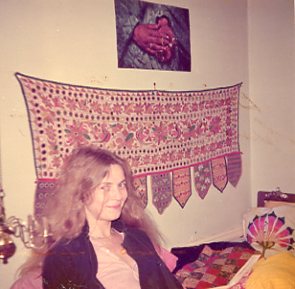 May the long time sun shine upon you
All love surround you
And the pure light within you
Guide you all the way on. *

from A Very Cellular Song by the Incredible String Band

addendum November 7th: I received this beautiful memorial from Inger's husband this morning and felt it should be added to the post:

Her leaving was a loss for everyone who knew her.  It has been almost 3 weeks since she left, and not a day goes by that I am not sobbing at the fact that never again in this life will I be able to hear her voice and touch her hand and be awed by the gentle light-love upon her face and in her heart.
But she loves God and even in the last hour of her life, she was urging me to trust in Him more than in the doctors who worked so hard to help her.   She taught me Love, taught me to trust it and to give it unhesitatingly and fearlessly.   Our Sheikh, Bawa Muhaiyaddeen, is the light of our hearts and Souls;  Qadir Bibi's love within my heart is now inseparable from God's love and wisdom.
She has not gone from my life, but has entered another room in my heart;  just as she has entered another room in her Soul-life.   My prayer for her is that her intention for surrender to God is accepted and that she becomes comnplete Divine Light, then returns to all our hearts and own  love.
I mourn her passing, I miss her every moment, but I am immensely grateful to have had 18 years to love her and to be loved by her.
She would not have us grieve.  What she would say is, "Do not miss me, but love each other as God loves you."  She would say it humbly and mean it and this is her beauty. 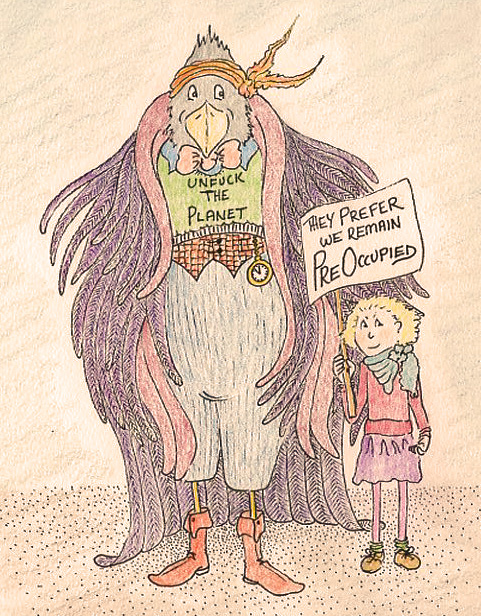 Naturally, Crow couldn't bear sitting around in his library once he heard about OWS so he's gone off to the festivities. Sometimes I get a bit jealous of his ability to flit across world borders without even so much as a passport. Now that he's been there for a couple of days he's sent a list of his favorite sign slogans to share with you. He promised to bring me a t-shirt just like the one he's wearing so long as I remember to save him some brandy.

I dream of a better world where chickens can cross the road without having their motives questioned.

The evolution will not be terrorized.

Support your local police - Beat Yourself up.

You'd be home by now - if you lived in your car.

Screw us and we multiply.

You're damn right it's our business.

Too broke to fail.

Class war is the best war.

If the system is corrupt, how could reform be the answer?

1% is the loneliest number that you've ever seen.

You can't arrest an idea.

NYPD is a layoff away from joining us.

When tyranny is law, revolution is order.

The beginning is near.

Lost my job, found an occupation.

Growth economics is a suicide cult.

Due to recent budget cuts, the light at the end of the tunnel has been turned off.

Too big has failed.


Man, proud man,
Dressed in a little brief authority,
Most ignorant of what he's most assured,
His glassy essence, like an angry ape,
Plays such fantastic tricks before high heaven,
As make the angels weep.

During my wanderings of the internets recently I found this example of a relatively inexpensive housing project that's under construction somewhere outside of Houston. The idea is to use 500 shipping containers outfitted with solar panels and other green technologies as affordable housing for whoever feels like experimenting with a different community lifestyle. My first thought was that it looks a lot like the Alamo and would probably be just as easily defended but to what purpose is anybody's guess - except perhaps as a retreat during the zombie apocalypse. The executives in charge of the Hive project describe it thus:

The containers will be easily affordable for working artists and creative professionals. Rents will range from $300 to $500 a month, and purchase prices from $10,000 to $50,0000, depending on how built out the container is — many of the containers will be offered as just shells with electricity and plumbing to give tenants creative freedom in their design. A variety of tenant uses will be offered in the square 288-container perimeter, including office, studio, retail, restaurant, entertainment, and residential. The goal is to have everything a regular village has: a farmers’ market, a veterinarian clinic, a daycare, a health clinic, recycling centers, art studios, coffee shops and more.


On the one hand it's kind of a cool idea but there are a few problems that immediately occurred to me and its sustainability is certainly questionable. For one thing, it's going to be built miles away from town on 6.5 wooded acres of land. Cars won't be allowed inside the perimeter but I saw no mention of grocery store, school, post office, movie theater, roller rink, museum, or any place where someone might go to earn a living. Wouldn't it make a lot more sense to place such a development close to where people already live? If they built it instead on some huge area of urban blight or rehabilitated the soils of an abandoned industrial complex and placed it there sustainability would be much more realistic.

Since it originally became very popular in 1992, it's pretty likely Daniel Quinn's book 'Ishmael' is old news to you. I'm sure I passed it by any number of times during my weekly sojourns to Powell's in Portland but one day last week when Crow was going through some documents he came across a picture taken of him and his old friend years ago. We talked about Ishmael's views regarding how humanity divided into two distinct groups about 10,000 years ago when agriculture first gained a foothold around the fertile crescent of the Tigris and Euphrates Rivers. The people who elected to stay in one place to farm the land Ishmael called Takers while the ones who preferred to continue their wandering ways he identified as Leavers.

Although his theory is valid, it's somewhat oversimplified for my taste and understanding about the general history of that period. It was just about 10,000 years ago that the last Ice Age ended quickly and produced a climate change significant enough to make food gathering much more difficult than it had previously been. The change to farming rather than following the herds while gathering what edibles could be found among the trees, grasses and tubers produced by nature was very difficult. Archeologists have determined from skeletal remains that the early generations born among the first farmers were noticeably smaller than their hunter-gatherer cousins. However, this soon changed and before long the farmer society formed divisions in its make-up we'd recognize today. Soon there were kings and standing armies to defend the land they had and grab as much more as they could defend. We can well understand that over the course of time the Leavers became more and more marginalized, until today when there aren't many left.

There's no doubt that the hardships endured by those early farmers has led to the benefits many of us take for granted today but the fact remains that our headlong rush toward continuing 'progress' has brought us to the brink of planetary climate disaster. The first Industrial Revolution began with the use of fossil fuels and since then we've discovered how to dig deeper for minerals, fish the oceans with larger nets, divert rivers with ever bigger dams and canals, appropriate more habitats of other species and cut down forests with more powerful land clearing equipment. One day last week Earth Overshoot day passed pretty much unnoticed but every year it happens a bit earlier that we exceed our annual use of the world's natural resources. It's the kind of debt the bank can't forgive even if was of a mind to do so.


I see the Occupy Wall St. movement as another harbinger of a growing world-wide movement for a change in the way we live on Earth. It may not be articulated as such but people need something to work for rather than laboring to produce more and more useless stuff from dwindling supplies. Better to do nothing rather than dig one more oil well in deep water or pave one more wetland for a big box store full of goods most of us neither need nor can afford. Now that unemployment has reached massive proportions many of us are already learning to live with less than we thought we needed. Understanding that true wealth lies in a new era of progress without growth might be a smaller step than we realize. The Transition Movement is already gaining some ground in building healthy communities with thriving economies and healthy natural environments.

It's not my habit to write long posts and this one is already quite big enough so I'll end with a final favorite quote from Ishmael:

“If the world is saved, it will not be saved by old minds with new programs but by new minds with no programs at all.”


Yesterday I saw some people carrying an Occupy Halifax sign. ♡ 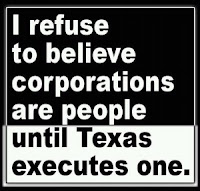