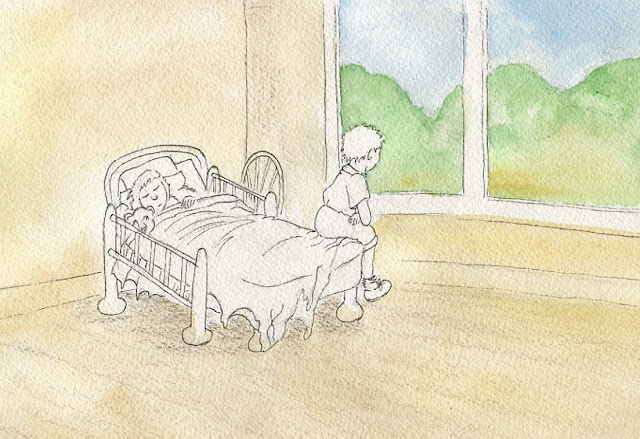 A little girl was ill in hospital with a rare blood disorder and was badly in need of a blood donor but a match could not be found. As a last resort, her six year old brother was checked as a match and much to everyone's relief, he was.

Both his parents and doctor sat the little boy down and explained how they would like his blood to help his sister so she would not die. The little boy waited a few moments then asked if he could think about it. It wasn't the reaction the parents or doctor expected but they agreed.

The following day the little boy sat in front of the doctor with his father and mother and said he agreed to give his sister what she needed.

The hospital staff moved quickly for his sister was fading quite fast. So the little boy could understand what was happening, he was placed in a bed next to his sister and so the transfusion began. Quickly, the colour and life began flooding back into the little girl and every one was overjoyed.

The little boy turned to the doctor and quietly asked, "How long will it be before I die?"

Now we know why he took a little time to think about it.

I offer my apologies to those who think this one was a bit too sweet but it was a story that touched my heart.
Sometimes that's enough.

A pessimist gets nothing but pleasant surprises.. 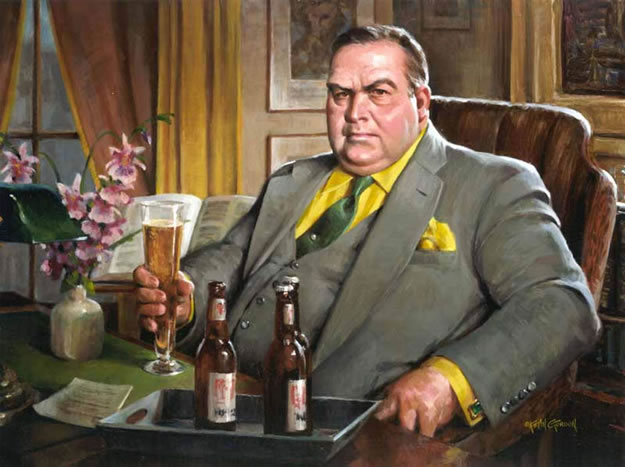 I've spent a large part of my reading time these past few months re-reading the Nero Wolfe detective series written by Rex Stout. In case you're not familiar with them, as you very well may not be, the books (33 novels and 39 short stories were written between 1934 and 1975 when Rex Stout died at the age of 88) are mysteries that feature the weighty genius detective, Nero Wolfe. Brilliant, eccentric cynic Nero Wolfe makes his living as New York City's finest private detective. He charges outrageous fees, usually in the tens of thousands, to solve the highest-profile murders - because, quite frankly, he needs the money. After an adventurous youth in his native Montenegro, he's now fully engaged in the pursuit of self-indulgence, weighing in at "a seventh of a ton" ('to insulate my feelings,' he explains). He literally refuses to leave his home on business - or most anything else, for that matter - and has seen to it that there's little reason why he should.

Renowned Swiss chef Fritz Brenner caters to his gastronomic obsessions; botanist/put-upon plant nurseTheodore Horstmann helps care for the 10,000+ orchids in the rooftop greenhouse; and Archie Goodwin, our narrator, acts as his legman, secretary, bodyguard, occasional chauffeur and general sounding-board. A gifted investigator in his own right, Archie is the one who goes out and finds the suspects, collects the clues and romances the ladies, while Wolfe uses his keen intellect to piece it all together and collect the fee. (Although under some circumstances, usually touching pride - as when a woman was strangled in the office with Wolfe's own necktie - honour demands they solve a case regardless of client or funding.)

The enduring charm of the series lies in the meeting of their two worlds: 'a recurring miracle', as Wolfe once put it. Archie looks, fights and speaks fluent Philip Marlowe with a deft, self-aware touch all his own, and is actually much more likely to out-talk opponents than physically intimidate them ("by God, you'd clown at your own funeral!"). True to his Midwestern roots, he unwinds with a tall glass of milk and often shocks Wolfe by skipping a gourmet dinner for a deli sandwich while on a case. He refuses to be intimidated by anyone, let alone his formidable employer... which is understandable, given that his main duty is to irritate Wolfe out of his cushy routine and into taking cases in the first place.

Wolfe, on the other hand, represents the 'drawing-room' mystery taken to its logically ultimate level, right up to the climactic gathering of suspects to name the culprit. Within his plush, book-lined Manhattan brownstone he has evolved a lifestyle that has refined hedonism to the most exquisite routine - breakfast in bed, visits to the orchids from nine to eleven and four to six without fail, no talking business at meals, etc. etc. - and tolerates no interruptions, not even from the police. He is all intellect, quite openly misogynistic, seemingly immune to any human passion whatsoever... save perhaps in his trust in Archie, which is absolute.

The supporting cast includes freelance investigators Saul Panzer, Fred Durkin and Orrie Cather, often called in to work surveillance and other routine angles on a case; Archie's casual girlfriend, smarter-than-she-looks society girl Lily Rowan; and Lon Cohen, city editor of the Gazette, who trades inside info for scoops on the flashy murders that Wolfe solves. Inspector Cramer and Sergeant Purley Stebbins provide the police presence, many steps up the competence ladder from Holmesian bobbies, and much more realistically resentful of a civilian wielding such power, but never quick enough to do anything about it.

Interestingly too, although somewhat strange as the years pass, is that while the central characters never age, and unlike the Sherlock Holmes stories that always happen in 1895, the Nero Wolfe books are always contemporary to their time. Of course when reading the later books it is kind of amusing to imagine Nero Wolfe as a ninety year old grump ordering the now seventy year old Archie to go out and charm the ladies. 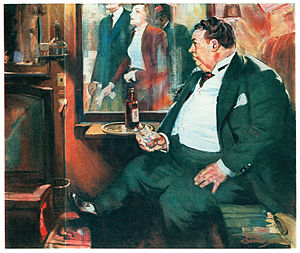 We were first introduced to the books in 1978 when the three of us spent a week in NY with some old friends of Jer's. They'd got caught up in the series themselves and gave us a couple they'd already completed to read on the train on our way home. By the time we got back to Providence we were addicted enough to want to read the rest but soon discovered most of them were no longer in print - a fact that lead us to scouring second hand bookstores all over our southern New England neighbourhood even as far as Boston. Eventually we did collect all of them - and read them as we found them (as in not in order) - and left them behind with tons of other stuff when we moved to Portland. Last spring we decided to see if it would be possible to purchase them all again and read them from beginning to end - 'Fer de Lance' to 'A Family Affair'. The very good news was that Bantam reprinted them in the early and mid-90s and most of the ones we obtained are from that run. Of course, things are never quite so simple as all that, are they? - and the mid-90s are now twenty years ago. But from one place and another we tracked down all of them with the last arriving just last week (only once did we pay $10 and most were far less). It's been a delight indulging in so many one after the other - and a comfort knowing there are others waiting when I read something else.. like the news, for instance. Even though they are works of purist fantasy it's relaxing to spend some time in a place where the ending of one human life is worthy of a complex investigation.

“Every man alive is half idiot & half hero. Only heroes could survive in this maelstrom & only idiots would want to.”
- Rex Stout

Yes, I did read a few other books in between, but more about them another time.