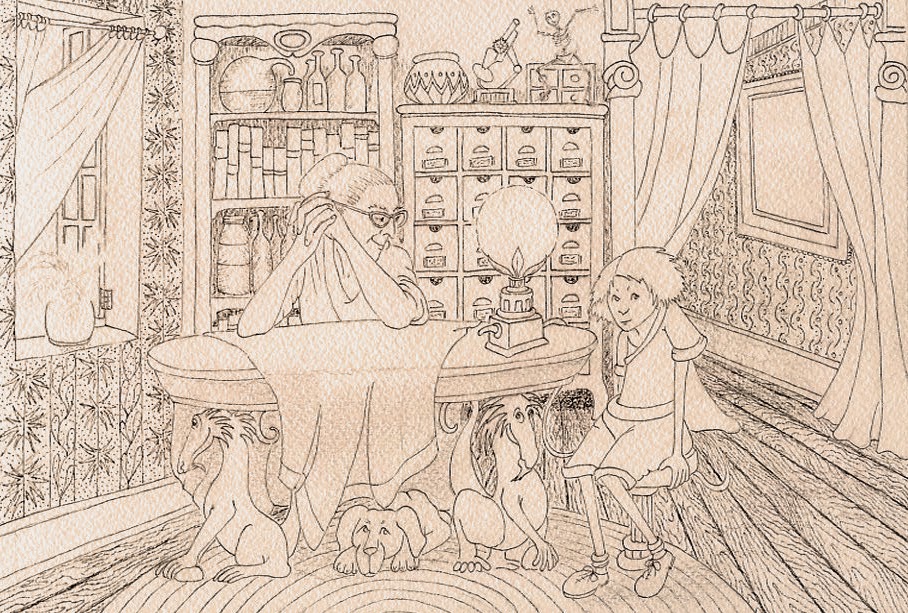 Okay, I'll admit I've been drawing again. I still have a story, hinted at in pencil sketches I posted a year ago, that seems to become clearer the more I draw. Life certainly would be simpler if the whole of it would just appear on paper or in text. I'm a terrible writer of children's stories because I hate imagining children in danger or distress. Goodness knows there's already enough of that in the news without me adding more. The problem, though, is that stories have to engage a reader's attention and that generally means conflict of some kind or other that needs to be remedied. So I continue to work on these pictures bit by bit  while the story, such as it is, unfolds. I'm thinking to paint them one after another once the line work's all done. Then again, they're interesting enough on their own that I may just start painting them and pass on the story altogether. Time will tell.

Besides, the competition for attention has become pretty intense. It’s amazing just how much we are bombarded by the media – or perhaps allow ourselves to be bombarded is the correct way of saying it. Until something like this animation by Cesar Cepeda is placed under our noses it is easy to imagine that it isn’t too much and that we control it.

The Control from cesar cepeda on Vimeo. 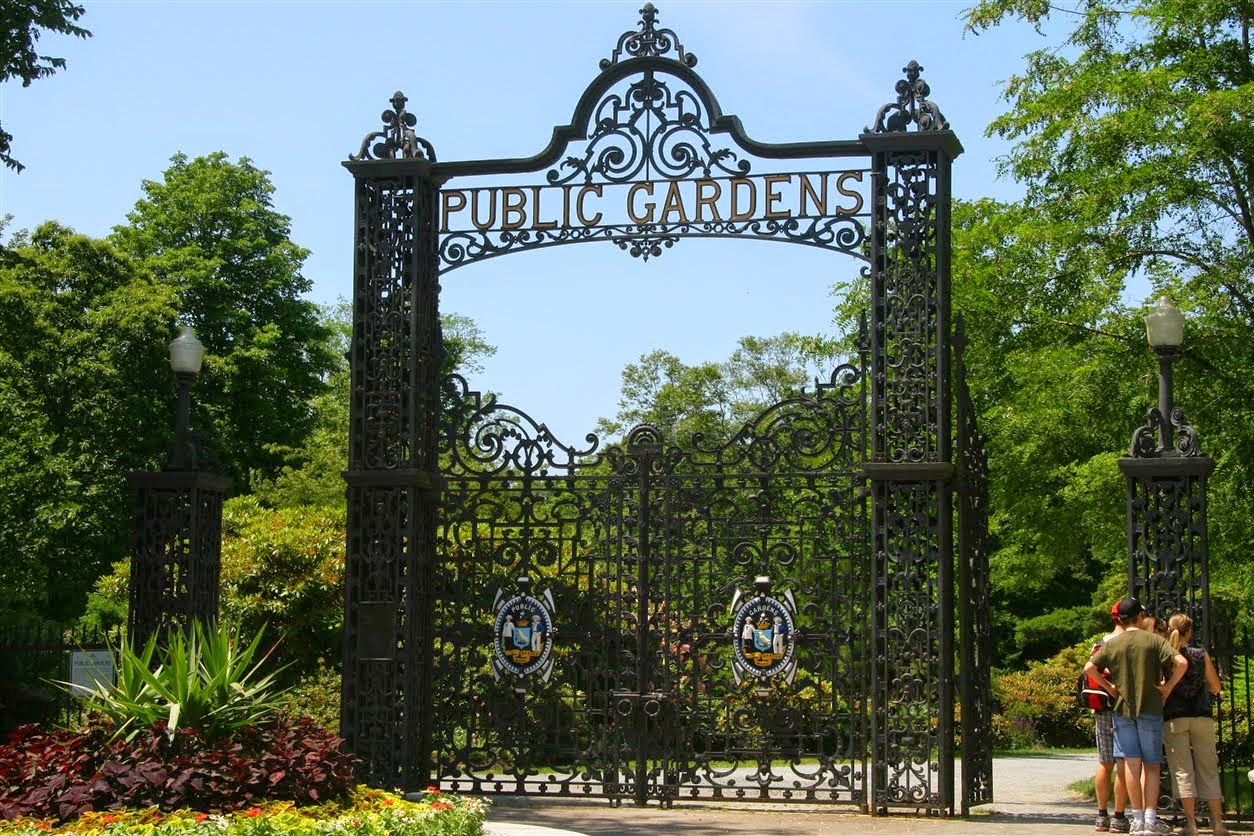 While our favorite park in Halifax is Point Pleasant, the large multi-pathed and semi-wild woodland that overlooks the harbor, the city does have a very rare (in North America) formal Victorian public garden at its heart. Even though we walk through its seventeen acres fairly often, I hardly ever remember to carry my camera. This time I did. 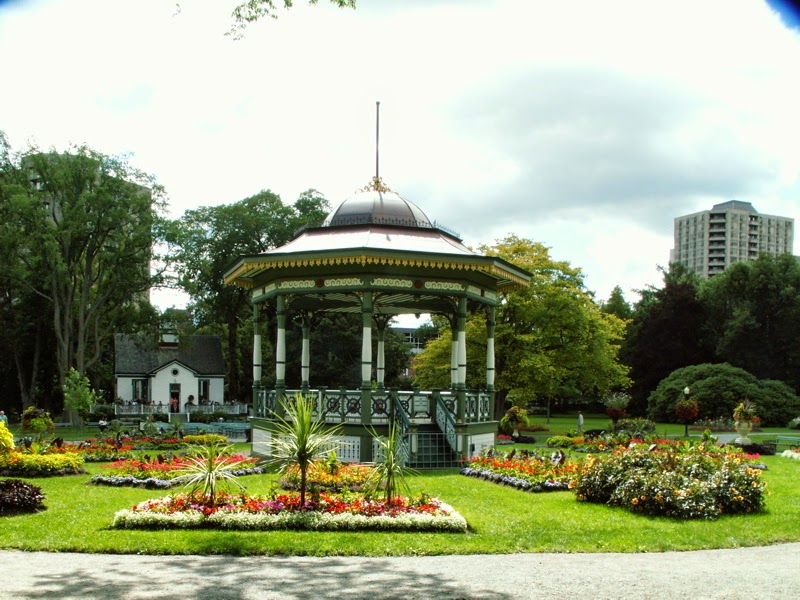 Known now as The Public Gardens, the park was established back in the 1830s and officially opened to visitors in 1867. It's home to several ornate fountains, a bandstand, statues, urns, a lake and a magnificent wrought iron fence and entrance. Also among their treasures are over 140 different species of trees, including unusual or rare species, some of them very old. There's an oak tree planted by King George VI and a new one next to it planted by Charles earlier this summer. So far that one doesn't have a plaque as I expect they're waiting to see if it survives a Nova Scotian winter or two. I'll wait a while before I take a picture. 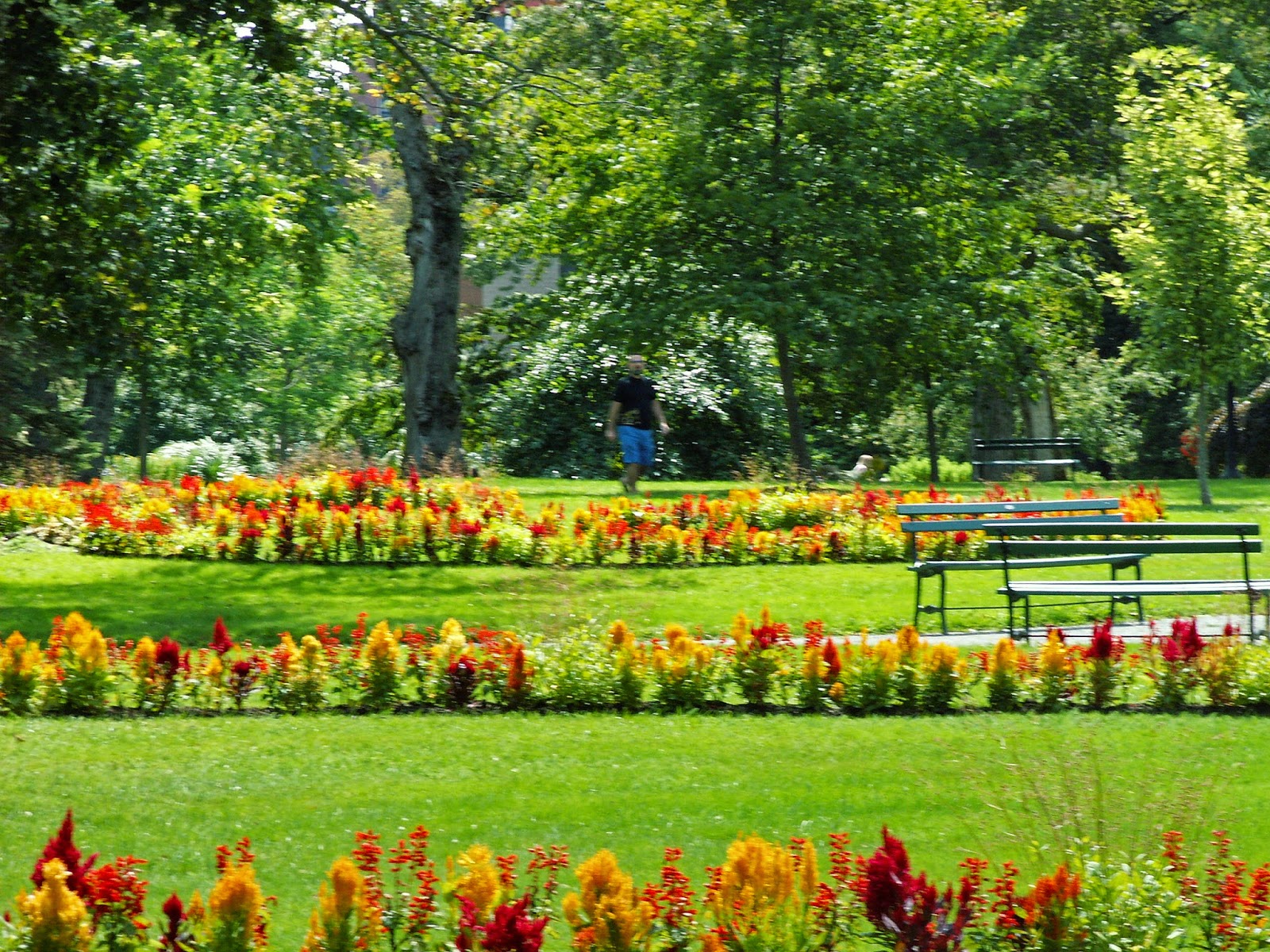 As the aim of the urban Victorian garden was to display a great variety of plants in a confined space - confined, that is, by the standards of aristocratic country estates or the great landscape gardens of the eighteenth century - this one is very successful as you can see. I promise I didn't enhance any of these pictures. In fact, it's almost too much if it weren't for being quite nice to actually see. 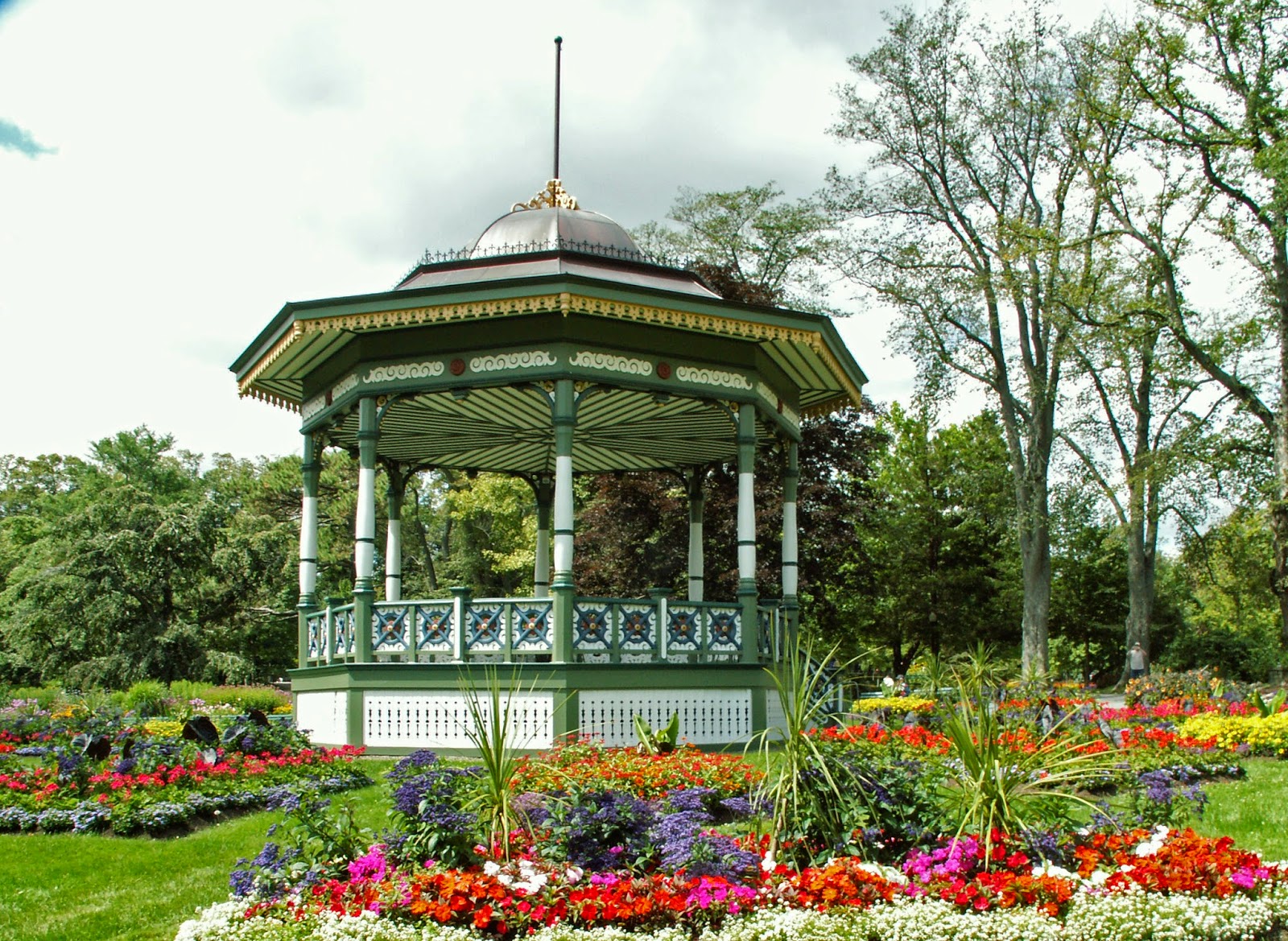 The bandstand, renovated two years ago with a new copper roof, hosts concerts every Sunday afternoon in summer. Summer is most definitely the Season here. Happily for us locals the park has stayed open until the first big snowfall these past few years and reopens in April once the white stuff has safely gone. 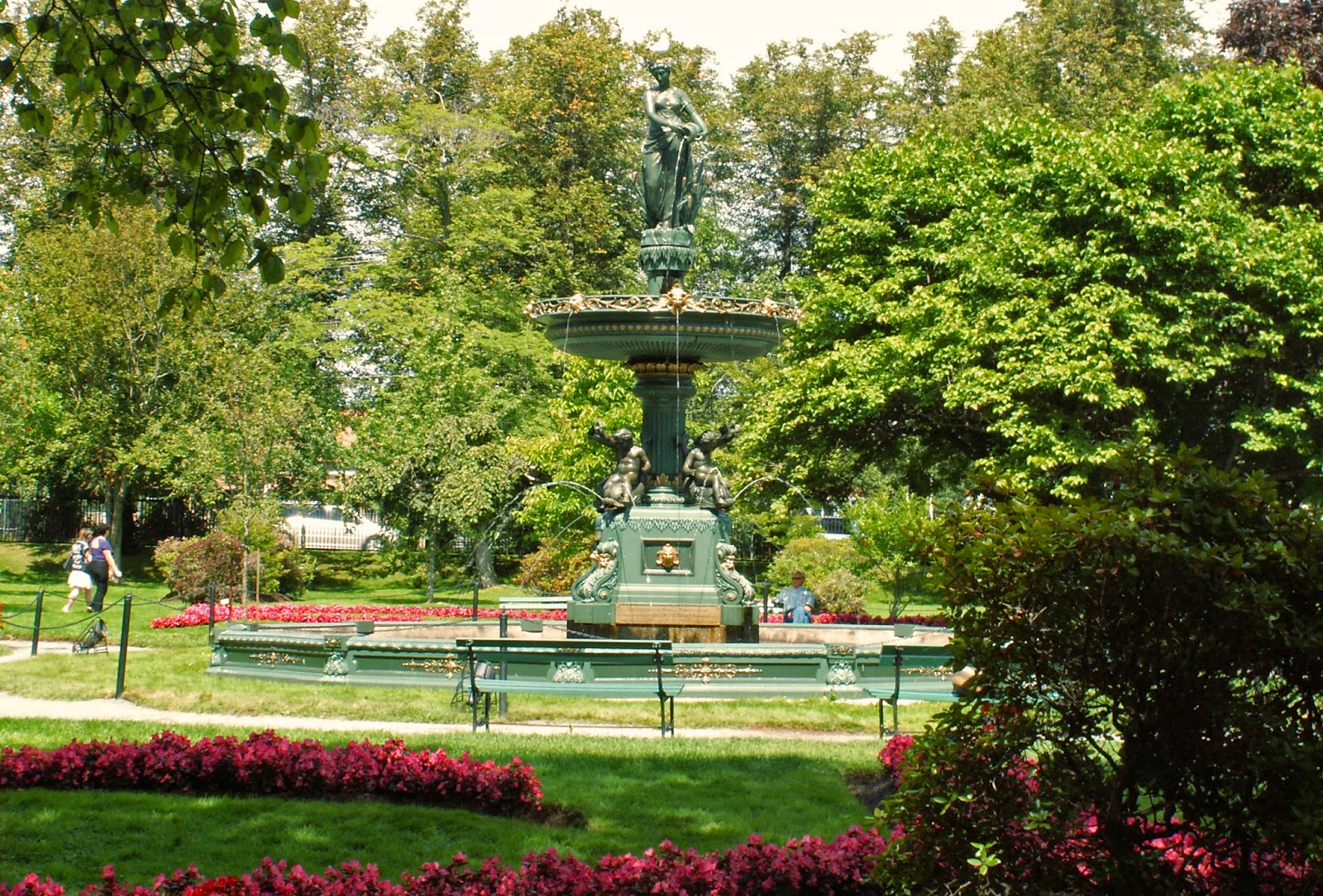 The beautiful Victoria Fountain, built in honor of Queen Victoria's Diamond Jubilee, was renovated just a year ago. Sorry, but I missed the proud seagull that was standing on her head just a second before. 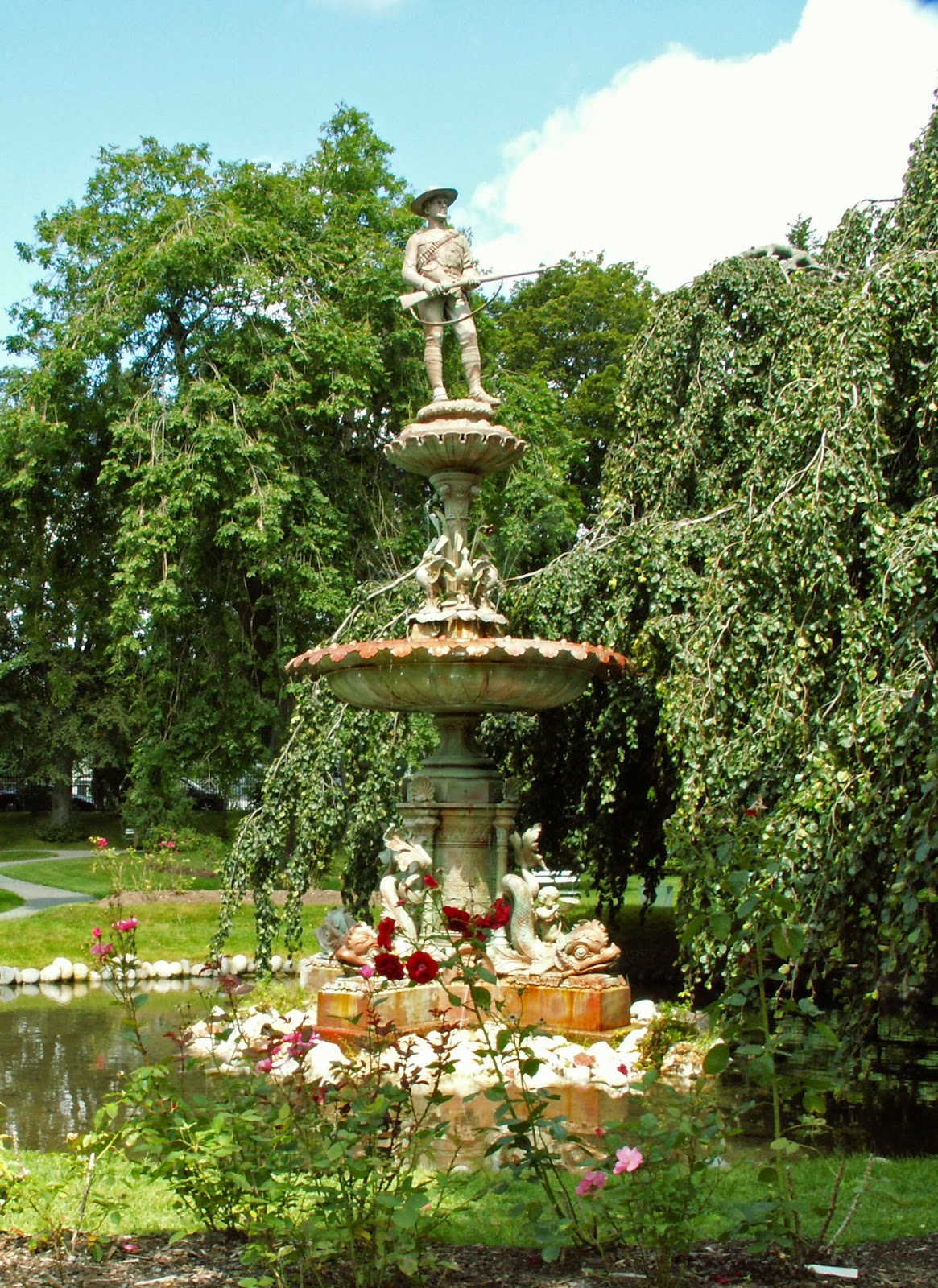 The Soldier's Fountain was built in honor of WWI veterans. There's a bench just under those tree boughs on the right where it's nice to sit on hot summer days 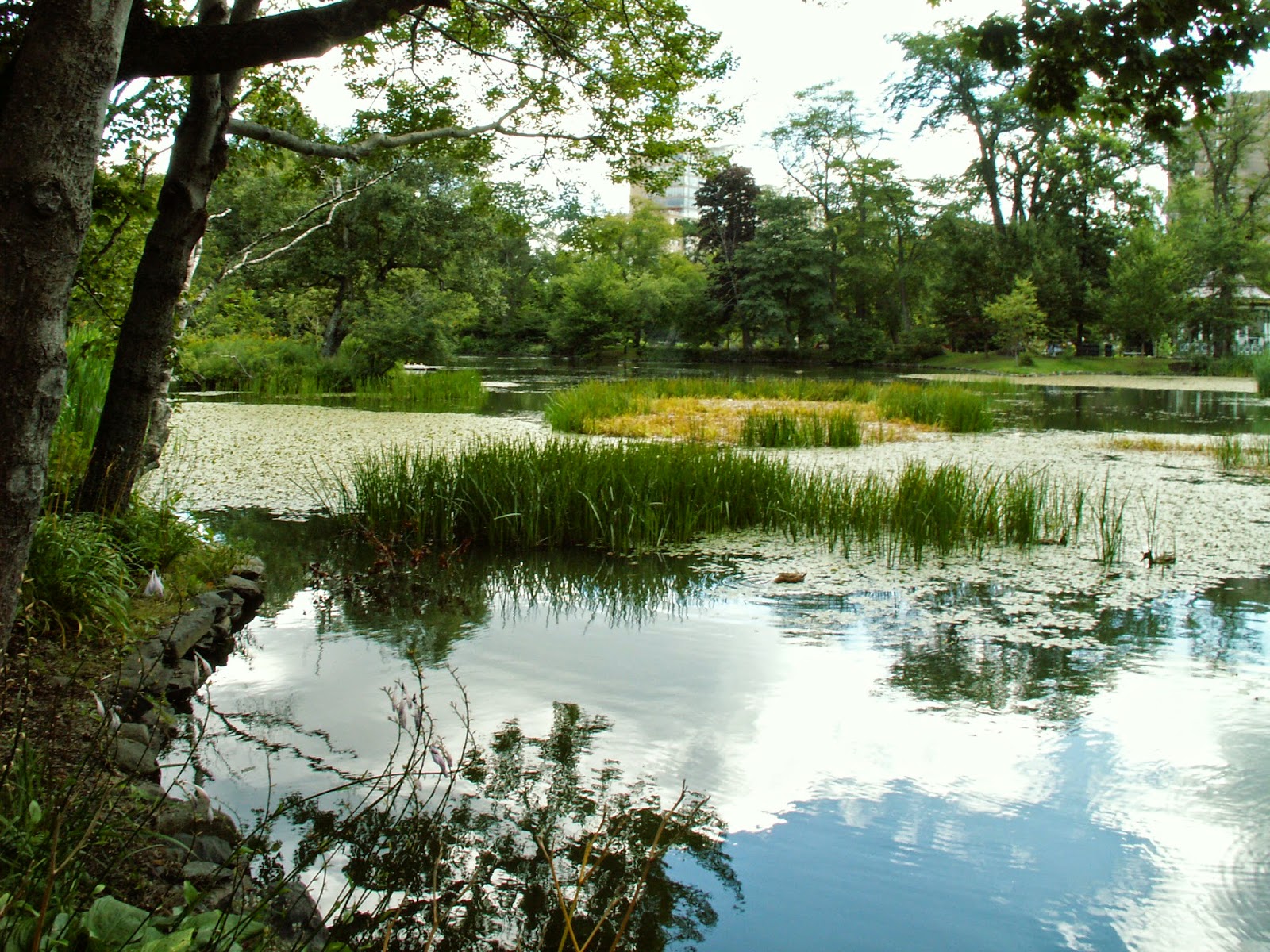 There's also a lovely, if rather small, lake in mid-center of the park - another nice place to sit and visit with the ducks and other birds that happen by. Yep, it's pretty tranquil around here all right. I just wish I could say the same for everywhere else, each in its own special way.
♡
Posted by susan at 1:10 PM 17 comments: 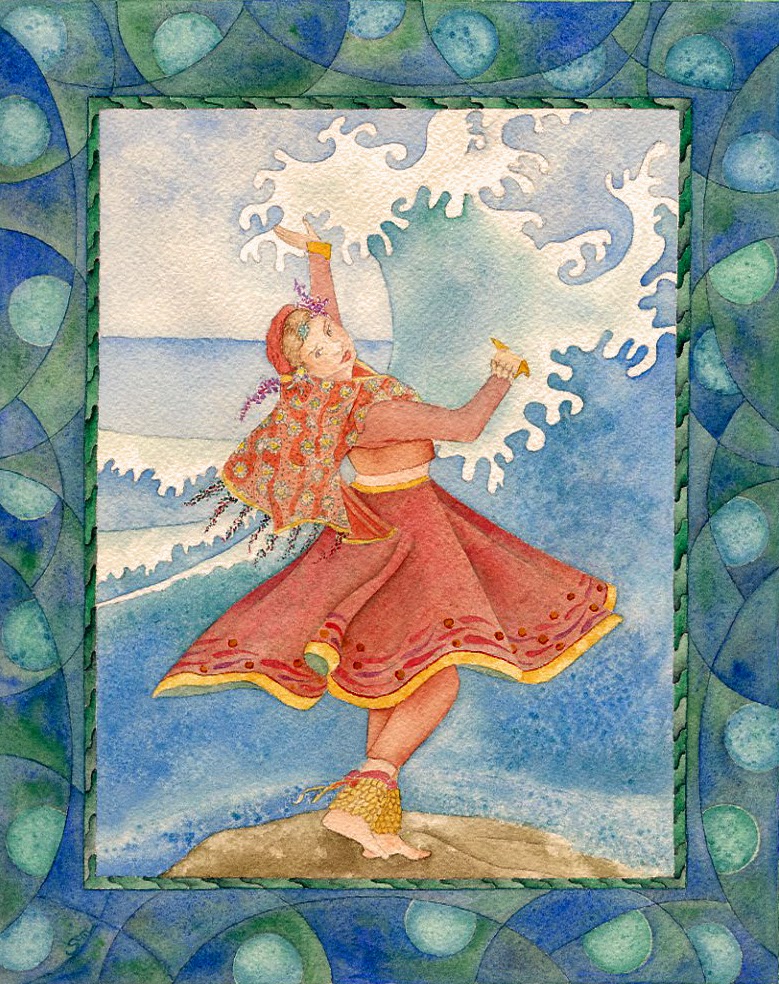 Here she is, my whirling sea dancer in a painting that was finished a few days ago. It was fun to do, but I seem to have a better time these days doing illustrations for stories written and unwritten. There will be more of those as time goes by.

Meanwhile I was reminded a few days ago about an artist who lives near the sea in Holland. I am awed and inspired by the work of Dutch artist Theo Jansen, who creates "sand beasts," kinetic sculptures that roam on the coast near his house in the Netherlands. He has been creating wind-walking examples of artificial life since 1990.

Constructed as intricate assemblages of piping, wood, and wing-like sails, Jansen’s creatures are constantly evolving and have become excellently adapted to their sandy beach environment. They sport legs, which “prove to be more efficient on sand than wheels . . . they don’t need to touch every inch of the ground along the way, as a wheel has to”.

You can always read more about him here or here, but the neatest thing of all is to spend a little time watching Theo Jansen's Sandbeesten cross a flat windswept beach. They would be an amazing sight to see in real life.

Compilation from Strandbeest on Vimeo.

Some of them, sensing when they're too close to the sea, back away while others can fasten themselves to the sand when the winds grow too strong.
Tell me that didn't make you smile.
♡

bored of the future with Crow 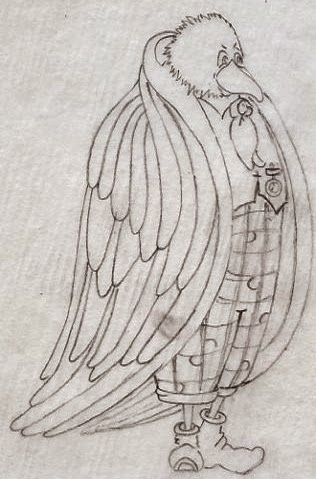 During an idle hour this afternoon Crow and I got involved in a conversation about a 'soon to arrive in all our homes' innovation - namely, the Internet of Things. Since we share a generally ironic point of view, as well as a low opinion of high tech devices, our exchange naturally enough turned to the topic of what could go wrong? Now if you're not au fait about this particular modernism (as I was not until Crow explained), it's the idea that all of our modern devices can - and soon will if the corporations whose sole intent is to mine us of the last of our cash get their way - talk and interact with one another.

Imagine the day when the 'Internet of Things' is established, you come home with your new 'smart toaster' and plug it into a kitchen outlet. The toaster boots up, finds the home Wi-Fi network and sends out a message to all the other smart devices registered to you. Your alarm clock, smart toothbrush, TV, smartphones, tablets, PCs, smart glasses, smart smoke detector, smart doors, smart clothes, smart fridge, smart washer and dryer and smart kitty litter box introduce themselves to the toaster, telling it what they're capable of doing. The toaster responds in kind and arranges to send and receive instructions from other devices.

Then comes the morning when you need lots of toast for guests. There's a lot of heat and a little smoke, and your smart smoke detector suspects a fire. So it sends out a message to the other devices saying, in effect, 'is anyone creating heat and smoke?' The toaster can respond the equivalent of: 'Yeah, it's me. No fire here and nothing to be alarmed about'. So the smoke alarm doesn't sound. But what if somebody else just set the curtains on fire?

It's even more likely our toaster will display a bread ad before we're allowed to make toast, suggesting to us we should get out of our jammies quickly, run down to the local grocery store and buy a specific loaf. Then as we're pressing down the lever it'll read our finger print to identify us, report that to a number of data warehouses for a plethora of governmental security agencies so they'll know down to the square foot where we are at all times and just how much toast we're consuming. That being said, I still find that my dumb toaster perfectly suits my needs, and see no reason for it to talk to any of my appliances. In fact I'd prefer not having to suspect my toaster and vacuum cleaner of colluding in some nefarious scheme while I'm out.

How soon they forget: Just in case you're wondering if I'm coming or going these days I'll tell you now I'm still here - but slower. I've been working on a couple of new things, this being one of them. I haven't seen anyone like this in my travels up and down the beach but it would be kind of nice.

One thing about my blogging habit is that I've come to demand of myself some new painting or drawing (at least) for every one. Talk about painting oneself into a corner, eh? Crow's pictures used to come much faster but now they too require days rather than hours (or minutes, in some cases).  Besides, it's summer and walks take longer.

I hope you're enjoying the best of summer wherever you are. Meanwhile, here are some words of wisdom from H.L. Mencken:

The whole aim of practical politics is to keep the populace in a continual state of alarm (and hence clamorous to be led to safety) by menacing them with an endless series of hobgoblins, all of them imaginary.

♡
ps: Don't forget your sunblock. I did that one overcast day and wound up with a rash that lasted ten days.. and most of my long sleeve shirts are turtlenecks :(
Posted by susan at 7:57 PM 26 comments: