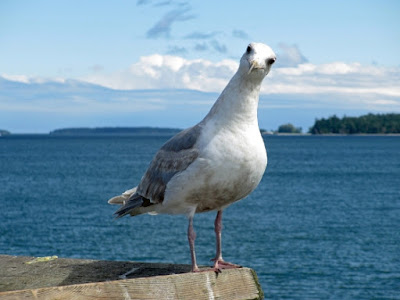 While it's always fun taking walks around our local oceanside park in summer there's one odd thing we've noticed about occasional visitors - namely, wedding parties. There are some very scenic spots in the park, grassy meadows near the water and a lovely old gazebo on a hill overlooking the harbor and out to sea. The problem is that private cars aren't allowed in the park and the best places for these romantic events are very far from the parking lots, bathrooms and fresh water.

I'm sure you can see the problem. It's all very well for the excited and healthy average bride and groom and their friends to get to these spots but not so easy for their more mature family members. It's sad to see a procession of elderly and often overweight wedding guests dressed in formal clothing walking a mile or two in inappropriate footwear along a gravelled path. A few days ago one lady 'of a certain age' was hobbling along barefoot and carrying her high heels.

It would be a fine thing if everyone could travel to the special scenic spot in a horse drawn carriage, or barring that, a rickshaw. Weddings are supposed to be reasonably relaxing occasions and not Bataan death marches for the friends and relatives of the happy couple. Don't people get married in churches or gardens anymore?

If anybody wanted my advice, I'd suggest holding the ceremony in a reasonable venue then sending the guests off to the reception where they could enjoy snacks and drinks while the wedding party went off to get the scenic view photographs. Heck, they could even get some exciting sky diving shots to remind them of their special day.

I'm guessing I'm not the only one to have wished things had been planned better. Meanwhile I'll have to keep looking away from the long suffering guests - never mind the bride with her tattered hems.

back at the games with Crow 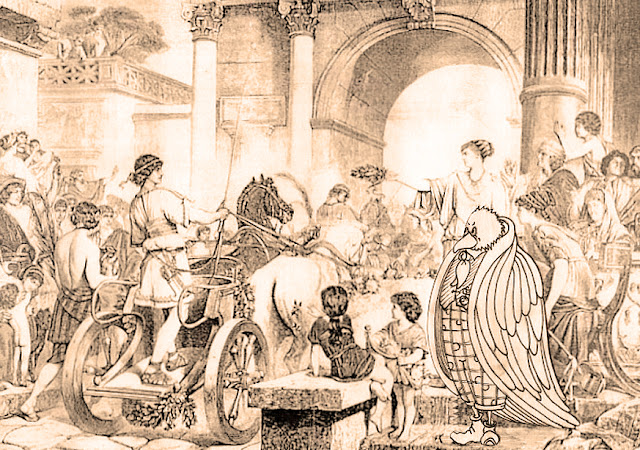 On his way home from visiting his condor clan buddies in the Andes Crow stopped off to see how preparations were coming along for the Summer Olympic Games in Rio. Wishing all those people well, let’s just leave them to their events while I tell you a couple of the stories he’s shared with me about the Games that began in Ancient Greece more than 2700 years ago and were performed every four years for a millenium. The contemporary ones began in 1896.

One thing Crow insisted I understand is that Ancient Greece was considerably larger and more influential than the country as you know it today. Here’s a map so you can see just how much territory it covered. You’ll notice there are lots of cities, or city states as they were known then, nearly a thousand of them besides the ones whose names are familiar like Athens, Sparta, Corinth, Thebes, Syracuse, Aegina, Rhodes, Argos, Eretria, and Elis. Whereas the biggest was Sparta, Athens, Rhodes and Syracuse possessed large naval fleets which also allowed them to control wide areas of territory across the Aegean. People being not too different from what they are now the city states of Greece were often at war, a situation that made travel between them dangerous. 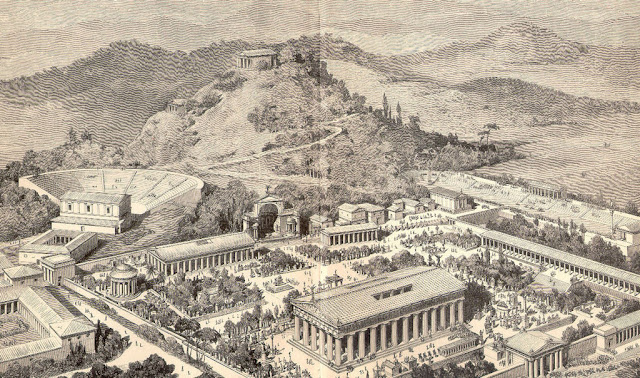 The Games were held in honour of Zeus, king of the gods, and were staged every four years at Olympia, a valley near a city called Elis. People from all over the Greek world came to watch and take part. As a religious festival the Games were more important than war so a ’sacred truce’ was enacted three months before the Games so the athletes and tens of thousands of fans could travel safely. Olympia was a pretty cool place with training facilities, pools and all the necessities to make the athletes ready:

It is all hilly and shaded, and has many springs...The city is well provided with public buildings, gymnasia, stoas, temples, theatres, pictures, statues, and an agora which is excellently situated for all trading purposes.
~ 3rd century BCE description 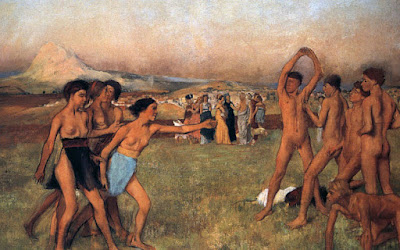 But so much for history - you probably know all about it anyway. What was more fun for me was hearing Crow’s stories, a couple of which I’ll share with you. There are hundreds of events staged at the modern Summer Olympics but back then, and for the first fifty years or so, there was only one - a race from one end of the stadium to the other. Then everybody would pack up their tents and go home. Eventually, once the organizers came to understand it might be more amusing for everyone if the Games lasted a bit longer, more events were added to make four days of competitions. They included wrestling, boxing, long jump, throwing the javelin and discus, and chariot racing (no horse races because saddles hadn’t been invented yet).

Competing in the nude became the rule after a young wrestler whipped off his loin cloth before a match so he had more flexibility. This was before spandex was invented. A version of wrestling, the pankration, was probably the nastiest event because there were almost no rules. While biting and eye gouging was officially banned the decree wasn’t always enforced. I’m not even going to mention the fighter who won a match by breaking his opponents fingers at the beginning of the match. oops.. However, cheating was punished. Anyone caught cheating, trying to bribe an athlete for instance, was likely to be flogged and had to pay for a bronze statue of Zeus, as a punishment. There were many statues of Zeus at Olympia.

Women were not permitted to participate in or watch the events although young girls were allowed in the crowd, the sole exception to this rule was the priestess of Demeter who had a special viewing platform.

One of Crow’s favorite stories is about the woman who broke the rule against women at the Games (although I’m sure there were many cooking dinners back at the tents). Anyway, a lady named Mrs. Kallipateira was the racing trainer for her son Peisirodos, Pez and, naturally enough, wanted to see him perform. When he won his race Mrs. Kallipateira’s experienced a fashion emergency of such severity (prompted by all her jumping up and down) that made it apparent to all that she was indeed an adult female. In order to avoid such an occurrence in the future rules were established that all trainers also had to be naked.

Yes, we enjoyed more than one snifter of Remy as Crow reminisced about the past and offered his suggestions for the future. In 2004, the Summer Games were held in Athens, close enough to make us think fondly about returning them to Greece, if they are to continue at all. So far that hasn’t happened, the Games moved on at the direction of all of those who profit from the bribes and chicanery that goes along with membership in the I.O.C.

We found it very interesting to learn that a number of cities have cancelled their bids to host the next Winter Games:
Oslo because there was so little public support for it.
Stockholm withdrew for similar reasons.
Krakow after a referendum found almost 70% of residents opposed the bid..
Along with Munich, Davos, Barcelona and Quebec City.
Leaving them with two potential hosts: Almaty, in the dictatorship of Kazakhstan, and the other was Beijing. Beijing won.

The same thing seems to be happening with the Summer Games:
In 2015 Boston withdrew its bid for the 2024 Summer Games because of low public support.
Hamburg pulled out after the local government lost another referendum.
Toronto’s mooted bid was scrapped.
The four candidate cities left are Rome, Budapest, Los Angeles and Paris - and Italy and Hungary are dubious.

We shall see, or should I say we’ll wait upon Events? Best wishes to all the Athletes in competition now and in the future. The Summer Games began with one competition and few contenders, now there are about three hundred events and nearly thirteen thousand challengers. They could use a permanent home.

* The picture at the top was made when Crow attended the hero’s welcome of an Olympic winner on his return home.
Posted by susan at 8:15 PM 22 comments: