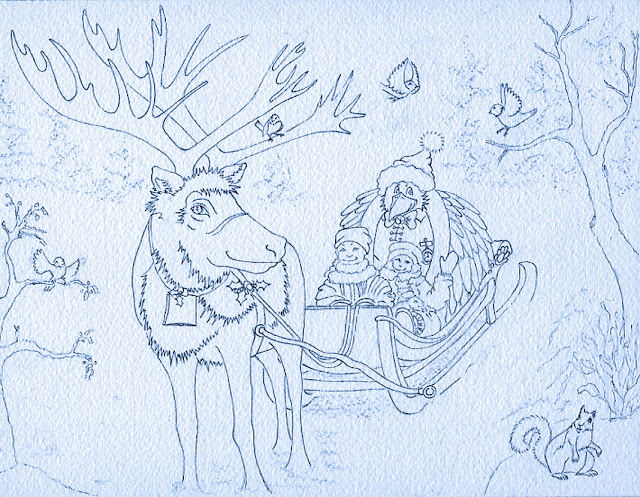 This year's winter card is well under way but not painted yet as I'd hoped.
Ah well, I hope you'll like it as it is at the moment.

May you always have walls for the winds,
a roof for the rain, tea beside the fire,
laughter to cheer you, those you love near you,
and all your heart might desire.

More soon and Happy Holidays from Crow and me :)
♡ 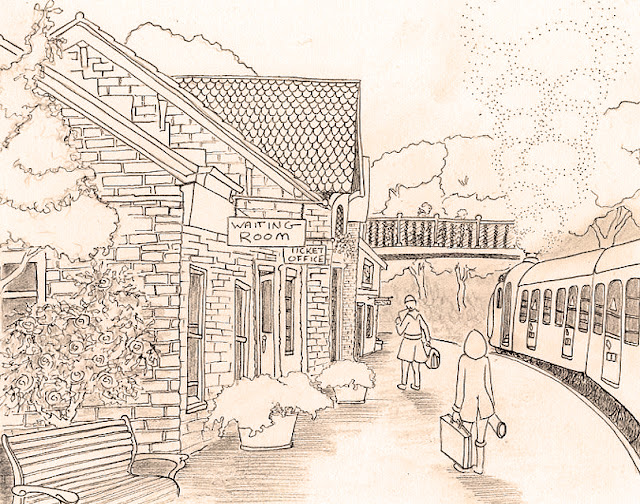 Decades ago I was living in England and loving to travel by train whenever I got the chance. For me it was a return to some bucolic yesteryear when the landscape was unspoiled. Imagine my surprise to read that my experience wasn't shared by the Victorians when railway travel expanded enormously in the mid 1800s. Many of them described the havoc wreaked upon urban centers by railways, such as driving up real estate prices, devastating working class housing, and adding to urban congestion. They also protested the effects of the new transportation technology upon the pristine countryside:

'Once it were a capital county, I say. Hah! you asks me what have happened to it. You take and go and look at it now. And down heer'll be no better soon, I tells 'em. When ah was a boy, old Hampshire was a proud country, wi' the old coaches and the old squires, and Harvest Homes, and Christmas merryings. — Cutting up the land! There's no pride in livin' theer, nor anywhere, as I sees, now.'

'You mean the railways.'

'It's the Devil come up and abroad ower all England!' exclaimed the melancholy ancient patriot.

Within a few decades the term Railway Mania was used to describe a huge speculative bubble. Reporting the investment frenzy of the time and the subsequent crash author Charles Reade wrote:

'When this sober state of things had endured some time, there came a year that money was loose, and a speculative fever due in the whirligig of time. Then railways bubbled. New ones were advertised, fifty a month, and all went to a premium. High and low scrambled for the shares, even when the projected line was to run from the town of Nought to the village of Nothing across a goose common. The flame spread, fanned by prospectus and advertisement, two mines of glowing fiction, compared with which the legitimate article is a mere tissue of understatements; princes sat in railway tenders, and clove the air like the birds whose effigies surmount their armorials; our stiffest Peers relaxed into Boards [of Directors]; Bishops warned their clergy against avarice, and buttered Hudson an inch thick for shares; and turned their little aprons into great pockets; men, stainless hitherto, put down their infants, nurses included, as independent subscribers, and bagged the coupons.'

Remind you of anything we've witnessed since then? People are always looking for a way to get rich quick.

The coming of the railway age was a watershed in the history of Great Britain. Some Victorians were happy and others mourned the changes that came with the new technology. Nowadays I often feel like one of those genteel cynics who sees our society heading full speed across a goose common where there is no track. Then again, perhaps all is well and I'm just getting old and cranky.

“Intelligence may indeed be a benign influence creating isolated groups of philosopher-kings far apart in the heavens…On the other hand, intelligence may be a cancer of purposeless technological exploitation, sweeping across a galaxy as irresistibly as it has swept across our own planet”
– Freeman Dyson