yer peanuts or your bootlaces! * 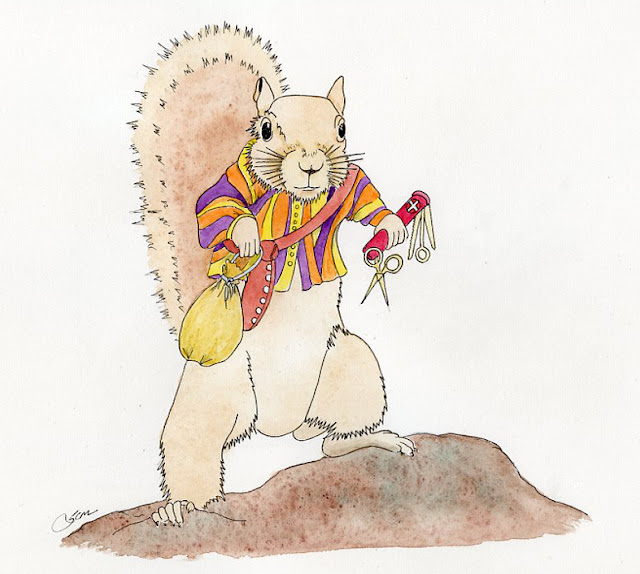 I don't know if it's the same where you live but around here the tabloid newspapers and fan magazines that always occupied the supermarket checkout chutes have all but disappeared. Sometimes you can spot a few on the odd rack but the area officially designated for impulse purchases has been taken over by candies, chocolate, snack items and beverages - things that people (or their children) will pick up while waiting in line. Why anyone would decide to offer a dozen different flavors or TicTacs is beyond me, but that's another story. Meanwhile there's no more room for periodicals nobody ever admitted reading. Which is a shame. Of course, despite the fact I never read them either it was always kind of amusing to look at the covers with lurid pictures of pop stars and brash headlines about what so and so looks like without makeup or who they may be sleeping with this week. 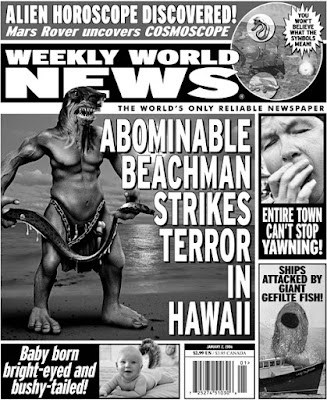 I ought not to have made an unequivocal denial of reading tabloids since the Weekly World News was a family favorite for years until it went out of business in 2007. The WWN had long specialized in the sensational and weird - Elvis sightings, UFO abductions, the continuing adventures of Bat Boy - and in attention-grabbing headlines like 'Garden of Eden Found: Original Apple Recovered!' and 'Grossed-out Surgeon Throws Up Inside Patient.' Then there was Ed Anger who would tell us every week about some subject that made him 'pig-biting mad', routinely criticizing Communists, immigrants, women, overweight children, liberals and pretty much anyone who is not a conservative white American male.

Well, it turns out I worried too soon and all of those people who never bought a tabloid newspaper at the supermarket checkout counter simply have to open any online newspaper to get their fill of craziness. Here are just a few from today:

The Daily Telegraph:
Woman says she is a cat trapped in the wrong body - she hisses at dogs, hates water and claims she can even see better at night.

The Washington Post:
The real problem with Donald Trump retweeting those provocative pictures of Megyn Kelly.

One way or another it appears that every single news source you can think of indulges in placing 'click-bait' items on the side bars of their web pages. No longer do people have to be embarrassed to be seen browsing through tabloids or fan magazines while waiting in line at the grocery store, now you can impress people by telling them you're reading the Star or the NY Times. How could they guess you're indulging a yen to learn more about goats and tigers?

Despite all the 'news of strange human behaviors' available in our daily newsfeeds I must say I would really miss the sheer lunacy of the WWN (which moved to the web under new management - and not recommended) if it weren't for the fact that so much more weirdness can be found on the internet. The problem now is in separating interesting anomalies like the latest conspiracy theory, UFO sighting,  OBEs and NDEs, or cases of spontaneous human combustion from crocodiles taking up residence in Florida pools, inadvisable prosthetic implants, extreme tattooing, or a woman asking an Italian fire crew to cut her free from her chastity belt after losing the key.

Strange phenomena as fodder for popular media is fascinating in its own way, but perhaps its status as a carnival sideshow shortchanges the possibilities inherent in the unknown. While we may  prefer to face our fears in a safe environment, turning the unexplained into a manageable quantity, our choices are to turn mystery into a quest with heroic possibilities or diminish the unknown with absurdity and ridicule. I know which one I prefer.

Quote of the week:  “May your trails be crooked, winding, lonesome, dangerous, leading to the most amazing view. May your mountains rise into and above the clouds.” 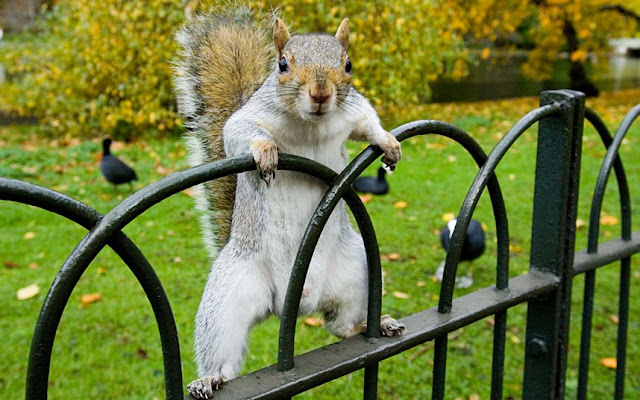 Did you know this has been Squirrel recognition week? Neither did I but this guy definitely convinced me to pay attention to the celebration. Must remember to carry extra peanuts to the park or I could be in trouble.

We need another and a wiser and perhaps a more mystical concept of animals. Remote from universal nature, and living by complicated artifice, man in civilization surveys the creatures through the glass of his knowledge and sees thereby a feather magnified and the whole image in distortion. We patronize them for their incompleteness, for their tragic fate of having taken form so far below ourselves. And therein we err, and greatly err. For the animal shall not be measured by man. In a world older and more complete than ours they move finished and complete, gifted with extensions of the senses we have lost or never attained, living by voices we shall never hear. They’re not brethren; they’re not underlings; they are other nations, caught with ourselves in the net of life and time, fellow prisoners of the splendour and travail of the earth.

and a comment from the Scots actor and comedian Billy Connolly:

“I've always wanted to go to Switzerland to see what the army does with those wee red knives.”
♡ 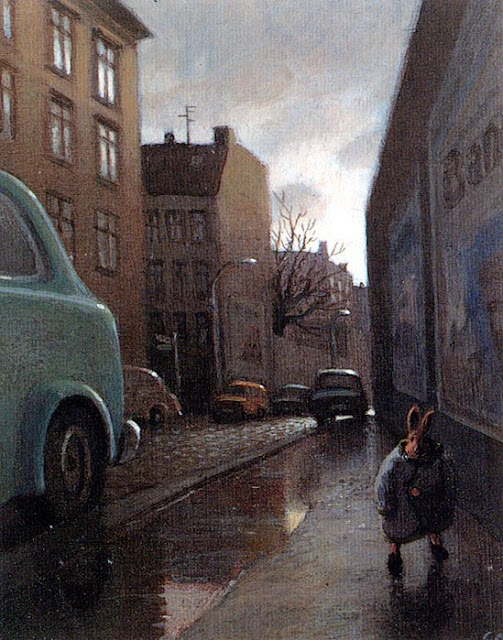 Now that almost a week has gone by since the last time I wrote here I find myself suffering that regular antsiness or should I say angstiness that it's time to do so again. It wasn't until my first post of the new year that I saw for certain I hadn't managed even one a week last year, down quite a lot from the more than one hundred I'd managed annually in the past. Back then too were regular contributions to Adventures Ink, my personal reminiscence blog next door. Now the problem as I see it these days is twofold, the first being that too much of what catches my attention these days is very depressing and who wants to write about bad news? Not me. The second is that over the course of time I developed a habit of drawing, or quite often, painting a picture for every post. Although I'm still capable of making pictures it appears I can't do it on demand any more - at least not on my demand. So what I'll do instead, beginning right now, is when it comes time to write a blog post, even if I have no illustration of my own, I'll post a picture or two by someone much more prolific than myself, someone whose work I find suits my mood and sense of irony - this time (and likely often) by the wonderful German artist, Michael Sowa.

A story that caught my attention a few days ago was about a device many of us are reliant upon at this time of year - the thermostat. Apparently, there is a new one called 'The Nest Learning Thermostat' which allows users to monitor and adjust their thermostats on their smartphones. Last week all of them suffered from a software bug that drained their batteries, leaving them useless and their users cold.

The fix required customers to follow a nine-step procedure to manually restart the thermostat, which involves detaching the device from the wall, charging it with a USB cable for 15 minutes, reattaching it to the wall, pressing a series of buttons, charging it again for at least an hour, and then..

Meanwhile, you freeze, your family freezes, and maybe your pipes freeze too. In case you're thinking you can sue the company it turns out you can't. Buried deep in Nest’s 8,000-word service agreement is a section called “Disputes and Arbitration,” which prohibits customers from suing the company or joining a class-action suit. Instead, disputes are settled through arbitration. The terms limit damages and specify that customers need to travel to San Francisco for arbitration. Oh.

After being put on hold with Nest’s technical support for over an hour, one customer went to his nearest Ace Hardware store (while still on hold) and picked up an old-fashioned mechanical thermostat for about $25.

What can one say?

Quote of the week:
"There is no coming to consciousness without pain. People will do anything, no matter how absurd, in order to avoid facing their own Soul. One does not become enlightened by imagining figures of light, but by making the darkness conscious."

return of 'The Mushroom Lady' 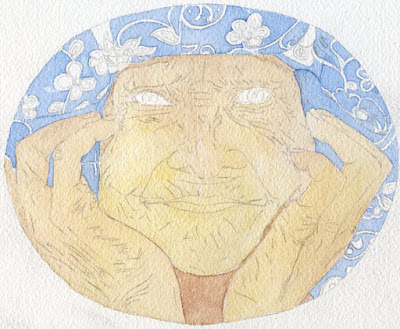 A few weeks ago I remembered a favorite psychedelic poster I used to own. Whenever I moved, which was fairly often in those days, I'd hang 'The Mushroom Lady' on a wall near my bed where we could look at each other first thing in the morning and last at night. She had a lovely smile. 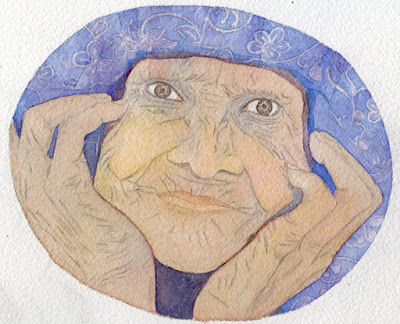 Somehow and somewhere along the way she was lost. Who knows how these things happen. I've noticed that many things, and people too, get lost or left behind on our journey through this life. 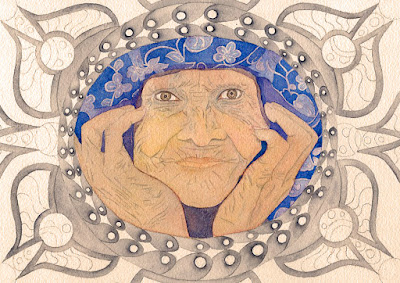 Still, I remembered her and wondered if I might catch another glimpse of that warm and loving smile. The only way I could think of to do that now was to try drawing her myself. Perhaps, if I made some effort I might even have a painting of her to hang near my bed: 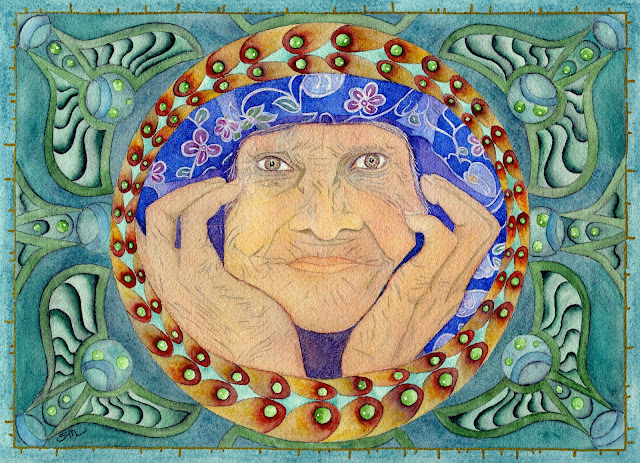 Her smile isn't quite the one I remember but, then again, neither is mine.
What do you think?
♡ 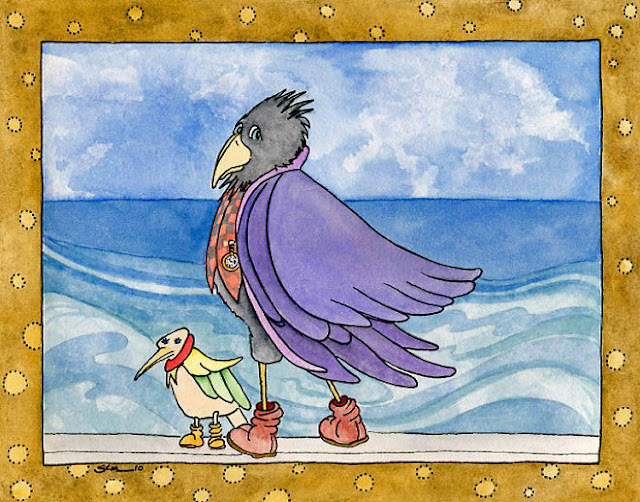 While Crow and I were enjoying some extra snifters of brandy the other evening we got into some more or less meandering conversations (as you do) that touched on many subjects. Here's just a part of one of them:

Crow: I wonder if anyone has considered the possibility that the only aliens you’re dealing with are escaped juvenile delinquents? Let’s examine this. It would appear they crossed many light years of interstellar space in custom flying saucers. If they had legitimate business here one would expect them to broadcast their messages to humanity through the many channels available to beings of obviously immense technological capacity. Instead, the two defining behaviors of modern extraterrestrials seem to be a (1) furtive avoidance of any kind of authority, and (2) hostage taking (fine, 'alien abduction', but more or less the same thing). It’s like they broke out of a detention center, and are trying to evade an intergalactic manhunt.

me: Now that you mention it I have noticed extraterrestrials seem to spend a lot of time loitering about in the most desolate corners of the world.

Crow: It’s pretty grim to go into hiding when you're used to the perks of advanced technology, which means roughing it in a remote cabin in Nunavik until the heat is off likely wouldn’t suit your average alien.

me: I still don't know why they can't come out and just ask for help. After all, we do have a tendency to root for the fugitive.

Crow: Humans have been beaming signals out into space for decades, hoping that one day you'll get conclusive proof of the existence of extraterrestrials.  Perhaps a much more productive approach would be to offer blanket amnesty and asylum to any non-terrestrial being that wants to come in out of the cold. Then let’s see how quickly you get First Contact.

Pour a trifle more Remy in my goblet, please, my dear. May I offer you another piece of fruitcake? Now what were you saying about politicians and international bankers?