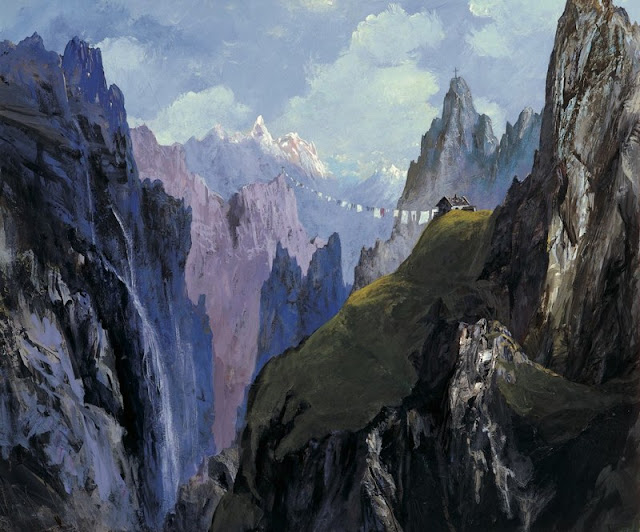 I've been an admirer ever since I first ran across the work of German artist Rudi Hurzlmeier at least ten years ago when I found his Krahe (Crow) picture on a greeting card at Powell's in Portland and immediately went in search of more images. Even though he's both extremely prolific and very well known in Europe there's almost no information about him in English. The wiki page (after translation) says this:

After the demolition of his school career, he worked as a gas station attendant, among other things, male model, parachute Artist, autopsy assistant, Hotelbuskoch, tilers, gigolo, set designers and antique dealers. 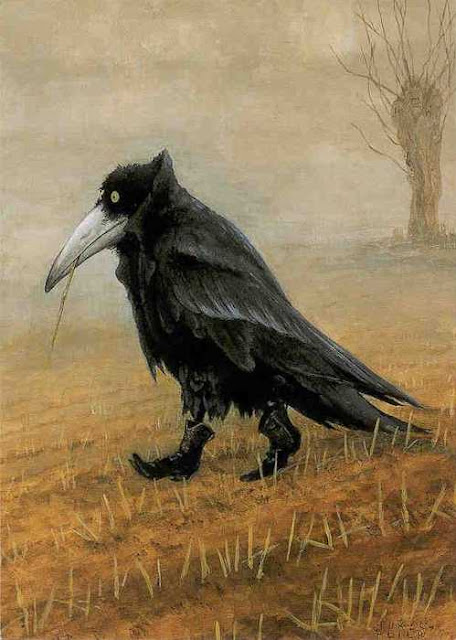 Not much to go on but mostly enough. He maintains a fine balance between an almost classical western painting style and a somewhat twisted but mostly sweet sense of humor. Here are a few favorites - including the original Krahe, who you probably recognized. 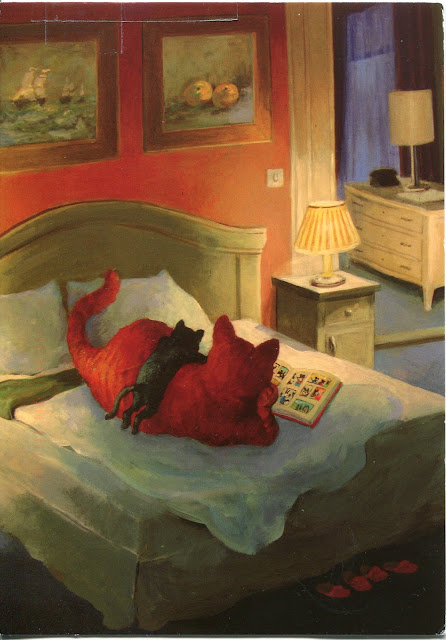 If you don't mind I'll grumble a bit in between examples of his wonderfully wry artwork. 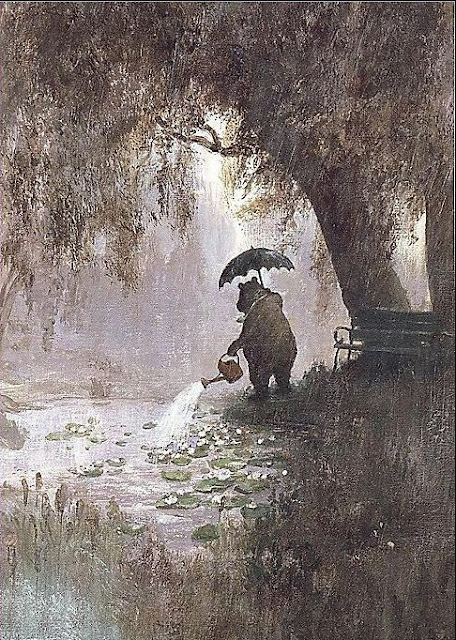 It's finally summer after a long winter and almost non-existent spring but we have to keep the windows and curtains closed all day because the workmen still arrive early every morning. 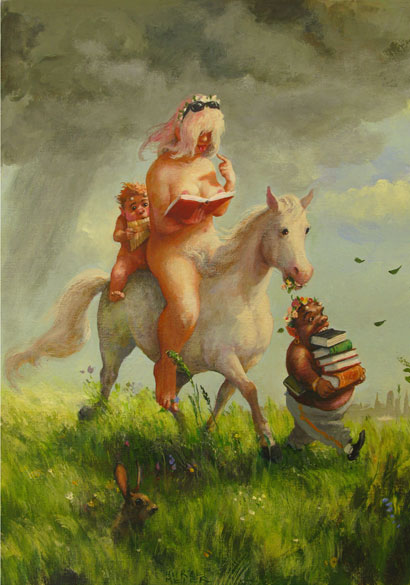 We knew they were going to replace the windows but didn't know they'd be removing and replacing all the bricks first. 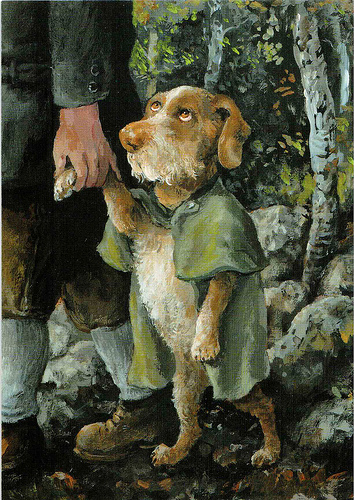 The sound of multiple mortar saws is not conducive to my own artistic endeavors, but I can try to imagine being half as funny as Rudi Hurzlmeier when I look at his pictures instead. 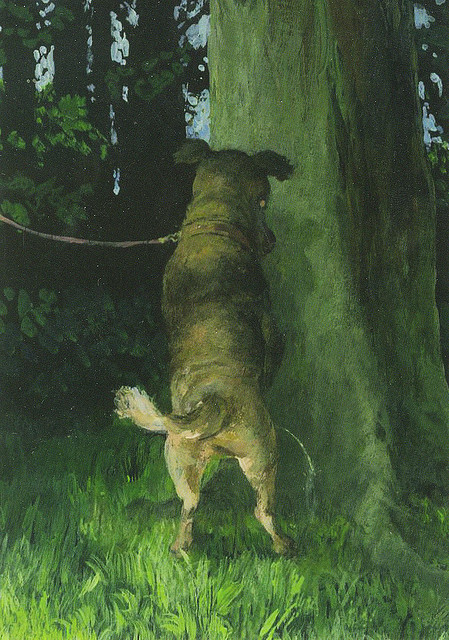 Even though the windows are closed, dust clouds the rooms. No matter how much I vacuum, dust, sweep and wash, I'm sure this cave is much tidier. I've pretty much given up til they've gone for good. 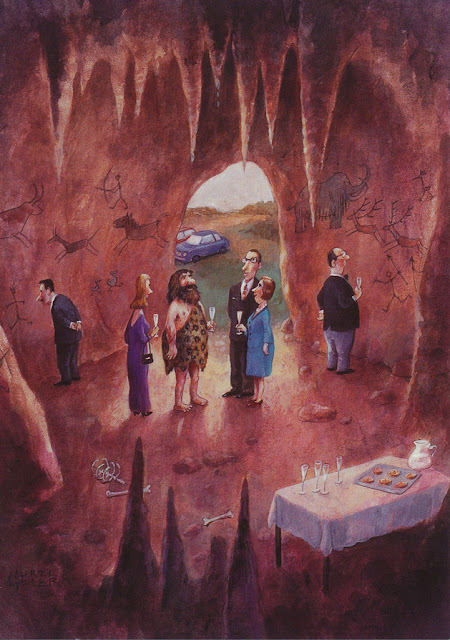 I had to seal up my paints because brick dust gets into everything. 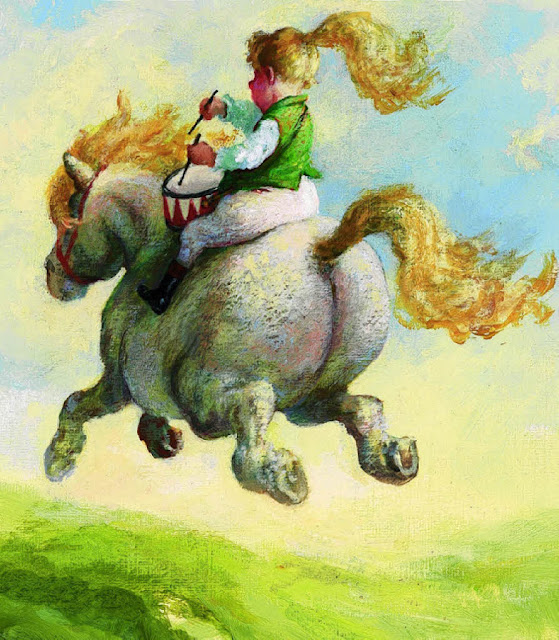 Just when we think they must be almost done, that there couldn't possibly be more bricks to remove and replace, they fool us by coming back down to grind out even more mortar. 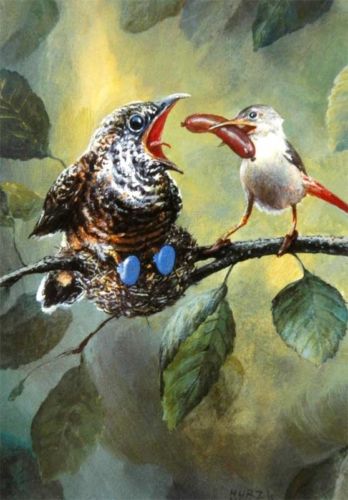 I wouldn't mind so much but for the fact it's been going on for a month already and so far there's been no sign of any new windows. Goodness knows how long that will take. If I'm not going to howl, I may as well enjoy the dance. 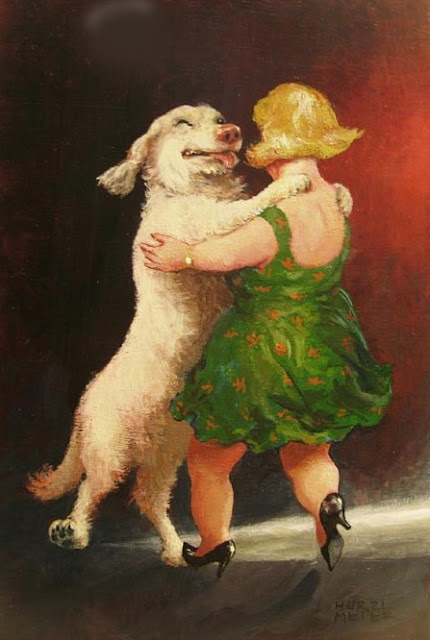 If anyone wants to come and visit I tell them to look for us inside the densest cloud of dust in the city. 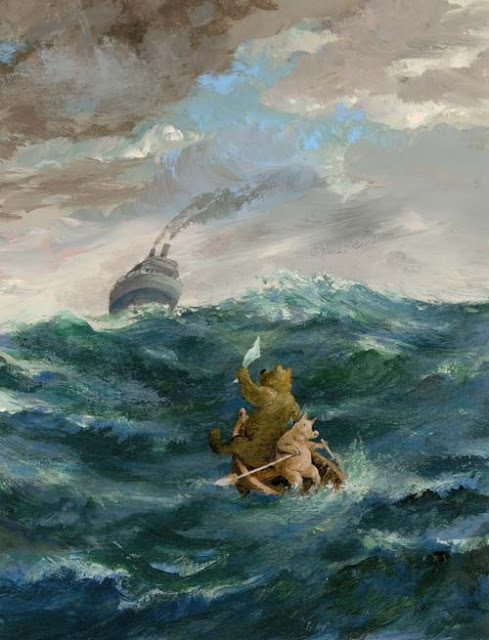 There's not much more I can say about Rudi Hurzlmeier's work that it doesn't say for itself. I hope you've liked it too. At least we can always walk along the beach and one of these fine days I may be able to return to those drawings that are currently under wraps. 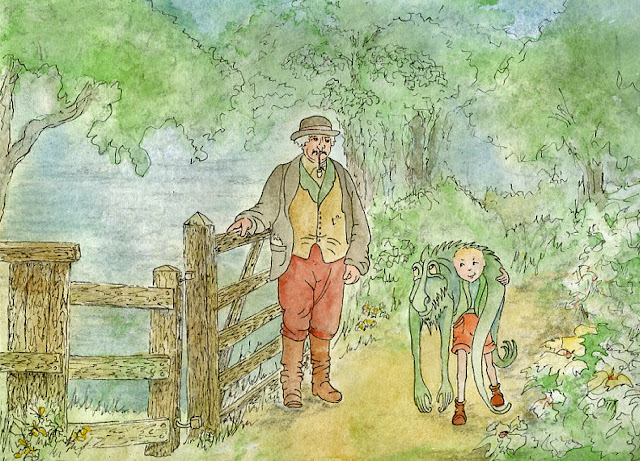 For anyone who's wondered recently if I'm still drawing and painting, the answer is yes. Essentially, I'm still working on the story I mentioned a few months ago but doing multiple sequential pictures isn't a simple process for me. I don't want to be making excuses but it's also not that easy to focus with a loud work crew often only a few feet away.

Anyway, just for the fun of it this afternoon I decided to paint a drawing you may remember having seen a while back. It's a story that pretty much tells itself but in case you'd like hearing my take:

A little boy who's been out in the woods has met a new friend. Both of them are wondering if they'll they'll be able to slip home safely without being noticed by any suspicious adults.

life as a walk in the park 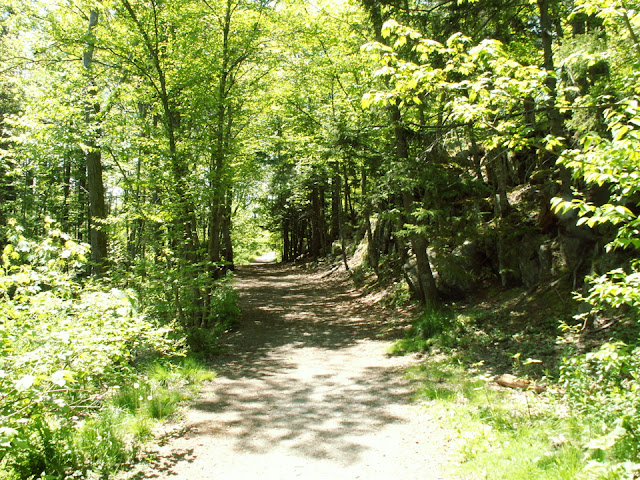 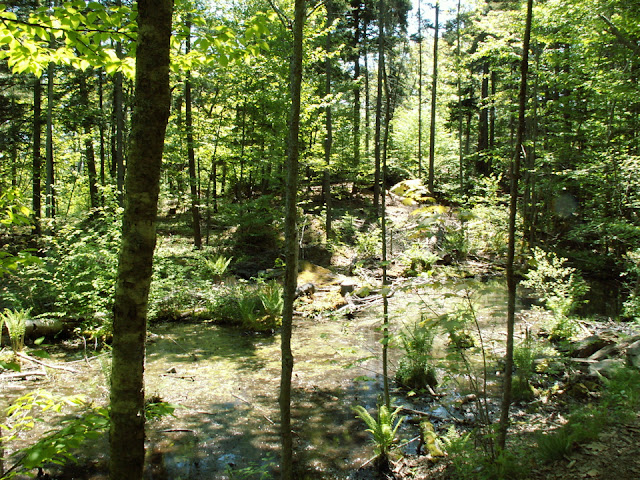 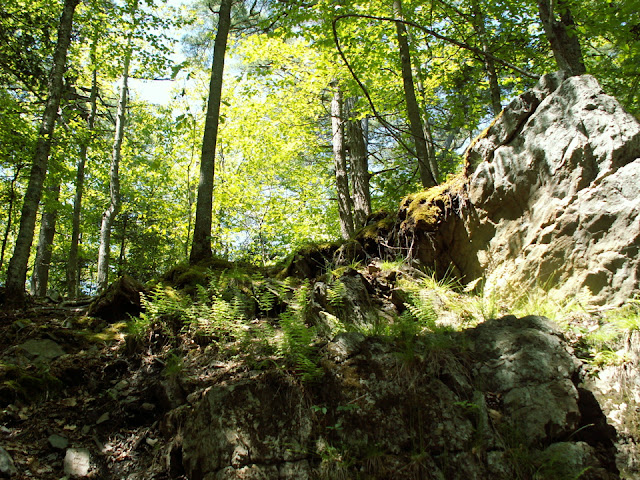 One fine morning a few days ago I remembered to take my camera with me when we went for one of our regular walks through the park. Although Point Pleasant isn't the biggest city park I've ever known well, it's certainly big enough, and wild enough, to give the impression you have much of it to yourself. In fact, that's often pretty close to true. Even though every path will eventually take you to the shore, it's quite possible to wander for hours and never see the sea. Anyway, the ones above are a few of the pictures I took as we walked along a meandering uphill path between granite outcrops and a watery marsh where the frogs were making rude noises. 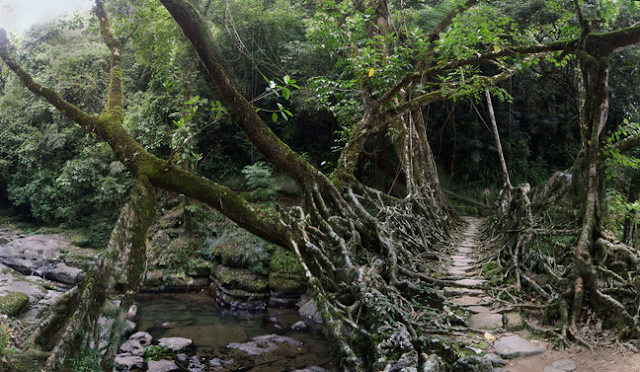 When you're far away from city sounds it's easy to imagine other places and different times. Of course, it goes without saying that most of us would be hard pressed to get by in the world as it was a century or more ago; we've become very used to our conveniences even when they aren't as convenient as we might prefer. Still, there are a few out of the way places where people continue to live in much the way they did long ago. One of those places is also in India, in the northeast where a rainfall that can often be measured in yards rather than inches, requires sturdy bridges. 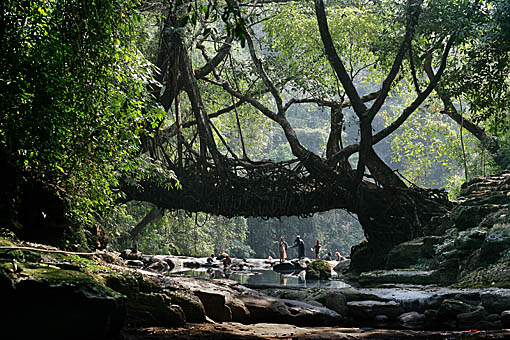 In a place like Cherrapunji, India, living bridges are made from the roots of the Ficus elastica tree. Long ago the people who lived there saw the possibility of growing bridges across the valley's many rivers by guiding the fast growing roots in the right direction through hollowed out betel nut trunks. Once a root reached the opposite side it was allowed to establish itself in the ground. The root bridges, some of which are more than 100 ft long, take 10 to 15 years to be fully functional, but they're very strong - strong enough to support the weight of 50 or more people. Better still, because they grow stronger as the years go by many of these bridges are more than 500 years old.

I'd love to walk across one of these but since getting there would provide serious difficulties, I'll just have to content myself with imagining one next time I'm on a very narrow path on a sunny day. There are more excellent pictures by Timothy Allen and a story about his journey there on Human Planet.

putting the 'con' in 'spiracy' 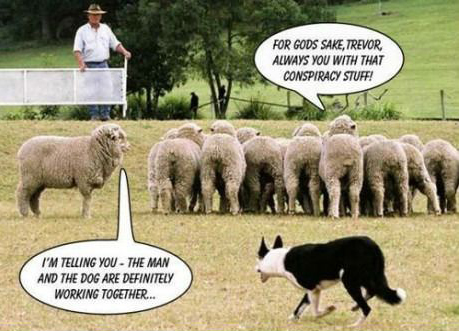 While I don't spend that much time being overly paranoid, there are a few technological developments that deserve a little scrutiny. For instance, the upcoming version of the XBox (which, like all current game machines, will be an internet-connected device) soon to be released to the public comes with a mandatory accessory called the Kinect. The general idea is that you can walk into the room where it's installed and just say 'XBox on' in order to play a game or watch television. Yes, a big part of its appeal is that you can use it to give your television commands just in case you're bored with old fashioned remote control devices; it will also be Skype enabled since MS bought them 2 years ago. Of course if all you have to do is talk to the Kinect then it can never really be off. And, while you can opt to turn it off (which, of course, would defeat its whole purpose), if it's unplugged, or removed, the XBox itself won't work at all.

The Kinect device designed for the Xbox One can monitor users’ movements with a camera that sees in the dark, picks up conversations as well as voice commands with a microphone, and can also read your heart rate using infrared cameras that track blood flow underneath the skin. What makes this worrisome is that Microsoft has filed a patent that suggests it is interested in using Kinect to count the number of people in a room in order to charge each person for providing pay-per-user content.  Imagine sitting down to watch a streaming movie that you've paid your rental fee for only to have the Kinect count how many people are in the room and turn the movie off until you've paid for everyone watching it: 'I'm sorry Dave, you can't do that'.

Officials in Germany and Australia have alerted their respective governments about the possibility of the XBox Ones being being used as surveillance devices and have advised against them. Goodness knows there are already more than enough privacy issues with CCTVs, cell phone photographers/videographers and what have you out in public without having another sitting in the corner of the room watching you or your children without you being aware that it's doing just that.

Now while I run off to find a piece of tape to cover the pinhole camera in my laptop, you can check out this sweet little movie about an old man who was afraid of falling:

The Man Who Was Afraid of Falling from Joseph Wallace on Vimeo.