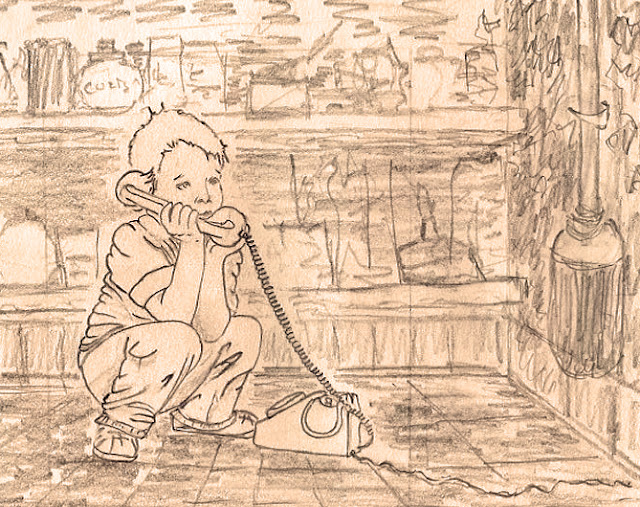 A lawyer attempting to call his clients had the following conversation with their little boy who answered the phone:

The phone rang and the little boy, in a whisper, says, "Hello."

Lawyer: "Is there anyone else there?"
Boy: (whisper) "The fire department."

Lawyer: "Is there anybody ELSE there?"
Boy: (whisper) "The police department."

Lawyer: "Let me get this straight, your mother,
father, the fire department AND the police department
are ALL in your house, and they're ALL busy. WHAT
are they doing?"
Boy: (whisper) "They're looking for me."

In between times of no painting a story can still suggest a picture - as this one did.

“Sticks and stones may break my bones, but words will
make me go in a corner and cry by myself for hours”
~ Eric Idle 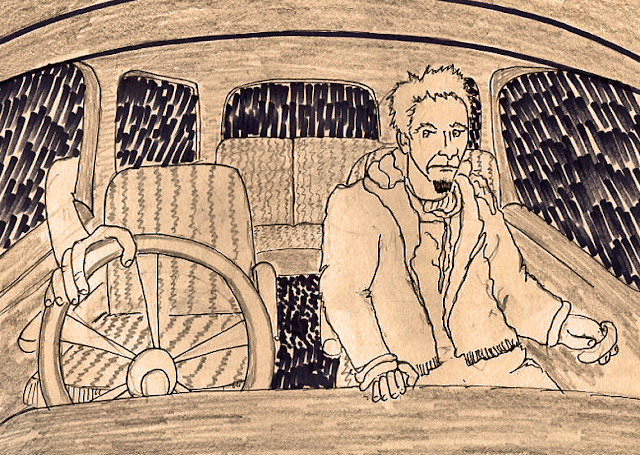 John Bradford, an Irish university student, was on the side of the road hitchhiking on a very dark night and in the midst of a torrential storm.

The night was rolling on and no car went by. The rain and wind were so overwhelming he could barely see. At long last he observed a car that slowly came towards him and stopped just a few feet away.

John, desperate for shelter and without thinking about it, got into the car and closed the door... Only then did he realize there was nobody behind the wheel and the engine wasn’t running. The car started moving slowly. John looked at the road ahead and saw a curve approaching. Scared, he started to pray, begging for his life. Then, just before the car hit the curve, a hand appeared out of nowhere through the window, and turned the wheel. John, paralyzed with terror, watched as the hand came through the window, but never touched or harmed him.

Shortly thereafter, John saw the lights of a pub appear down the road, so, gathering all his courage, he jumped out of the car and ran to that comforting beacon of normality. Wet and out of breath, he rushed inside and started telling everybody about the horrible experience he had just had.

A silence enveloped the pub when everybody realized he was crying... and that he wasn’t drunk.

Suddenly, the door opened, and two other people walked in from the dark and stormy night. They, like John, were also soaked and out of breath. Looking around, and seeing John Bradford sobbing at the bar, one said to the other...

Look, Paddy... there’s that idiot that got in the car while we were pushing it!

I imagine you may have heard this one before, but just in case you haven't..

fear of flying with Crow 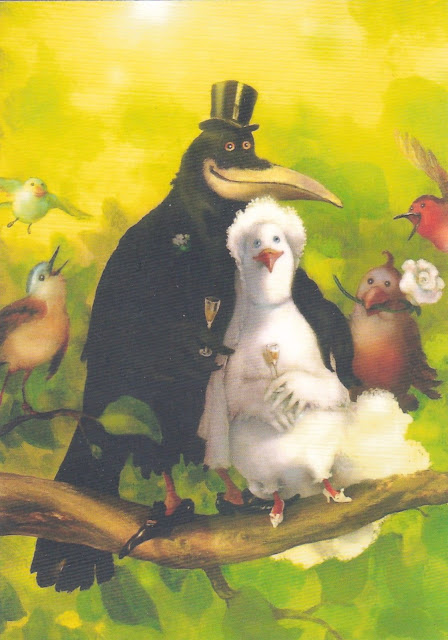 Recently Crow attended the nuptials of his cousin Cornelius and his lovely bride Hortensia. Aren't they a sweet couple?* and, yes, it was a lovely wedding.

When he returned he told me the guests at the reception had been quite disturbed about the news that humans are planning to annoy and irritate the flocks (more than they already are) by attempting to transport themselves to and from their various destinations by flying car. According to reports these vehicles are designed to fly 10 metres off the ground at a maximum speed of 100kph. Hmmm..

Anyway, here are some of Crow's thoughts on the matter:

I can understand a great deal of excitement has been generated among humans about being able to fly to the shop for a bottle of milk, but humans have certain handicaps in this regard that aren't shared by those of us born with wings. Ahem.

1. Birds, not having hands with opposable thumbs, do not text - ever.

2. When a bird decides to land most of us are small enough to find safety on a branch or on a roof. People in flying cars will not have this option.

3. Birds can glide. If anything goes wrong with your flying car it will become a flying brick.

4. The number of new things a flying car could crash into are too numerous to list.

5. There aren’t too many scenarios where a crash could be trivial. At 10 metres high and 100kph you'll be ensured of serious injuries - and not necessarily just to yourself.

6. There aren’t even the beginnings of any sort of 'road rules' for flying cars.

7. We teach our young to fly. Who will teach yours?

8. What about traffic lights?

9. Unlike birds having the occasional 'accident' as we fly over your grounded cars, or selves, what happens to those below when you notoriously messy humans throw things out of your flying cars?

10. We can fly anywhere we like, but what of flying cars? Where will they fly? and will they sing and make happy chirping sounds outside your window?

I fear there will be no peace anywhere.


After we talked about these unconsidered scenarios Crow and I watched a movie I remembered enjoying years ago. Called 'The Fifth Element', it does feature some flying cars:

Is this a modern development you're looking forward to enjoying?

Article of the week: False flags
Posted by susan at 8:15 PM 16 comments: 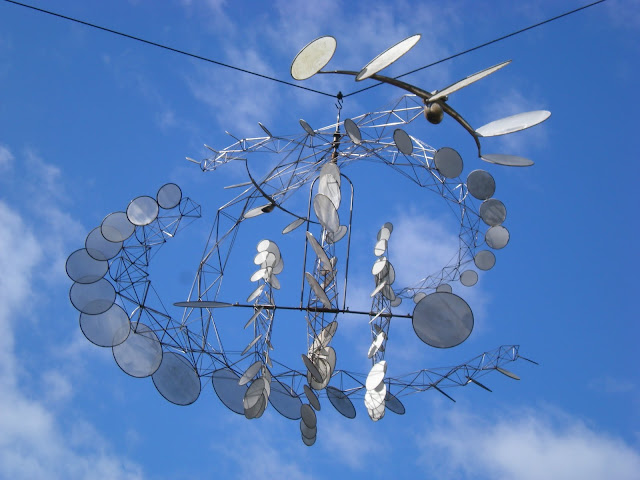 Anthony Howe lives with his wife on an island off the coast of Washington surrounded by little more than trees, wind, and other natural elements that inspire his incredible kinetic sculptures. He works primarily with stainless steel which he welds to create carefully engineered objects powered by the slightest breeze. His wind-powered, carefully designed kinetic contraptions are so well thought out it’s hard to believe they’re sturdy, welded metal constructions. When a gentle breeze begins to blow, the sculpture’s wind-catching spoons and paddles begin to turn, and the entire piece begins to undulate in fascinating patterns.

But better you see for yourself:

They are mesmerizing.
I have no backyard.
Even if I did...