dancing in my mind 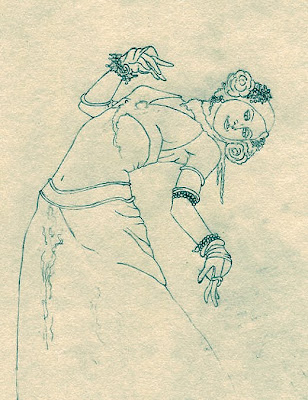 Here at the almost end of another year I find myself in a strange place. Not Halifax. Yes, still here but the city is anything but strange. In fact it's about as normal as any small city in Canada could be - cold, quiet, and somewhat sleepy now that winter's here. So far there's only a little snow but there are still a few months of potential weather excitement ahead.

What I mean by strange place is the one I find myself in on the inside and the fact I haven't posted much lately because I've been drawing a fair amount but don't seem to be quite in the mood for painting. I'm feeling a bit color shy if the truth be told, tired of painting fantasies yet too tied into the images. Any mythology I envision is strictly personal but always returns to a sense of sacredness I feel about our human experience of the world. Reverence for a spectacular view rises up in us unbidden but there's also a sacred aspect to whatever is in front of us right now and that's what I'm trying to capture in my own limited fashion.

Do you have plans for New Year's? If I could go anywhere for a party I think I'd like to visit Yokohama the night La Machine's 'La Princesse' and a sister arachnid showed up for a stroll around town. I, for one, welcome our new spider overlords.

Imagine how things could be if more people could see all the possibilities and wonders in this life. Oh well, c'est la guerre. Meanwhile, Happy New Year :-) 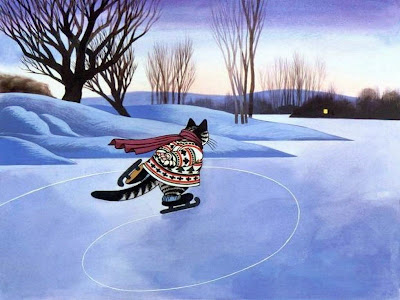 Wherever we wander may a warm light always welcome us home.
Peace of the day to all 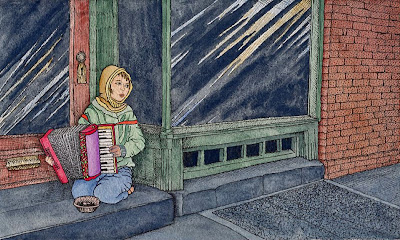 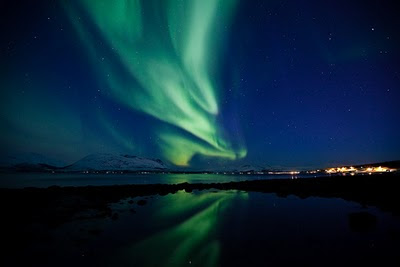 Speaking of magical lights (as I did a few days ago) a Norwegian photographer has made a timelapse video of the Aurora Borealis. This beautiful dance of light that happens only in the northernmost reaches would be wonderful to see, but since few of us are likely to go to Malmo, I decided to post the film. It's too beautiful not to share.

I hope you are keeping well in the long dark.
Brighter days are coming by and by.

One of the cool things about this time of the year is the sparkling lights on Christmas trees. It's always a shame when the holidays end and we're left with long dark nights and streets lit by ugly phosphorous street lights that make you eager to get back inside. Street lights are, of course, important for lighting our way home and for keeping the streets safe but as well as shining in a somewhat poisonous spectrum, they're also very costly to operate.

A group of scientists in Taiwan recently discovered that placing gold nanoparticles inside the leaves of trees causes them to give off a luminous reddish glow after dark. They were looking for a way to create high efficiency lighting at low cost without using toxic chemicals. Essentially, the gold treated leaves act like little solar panels storing up UV light throughout the day and glow softly through the night.

There was no discussion in the article I read about what happens in high latitude cities where the leaves actually drop in the autumn but it would give us all another good reason to look forward to spring. Considering the current price of gold it's also certainly true that there'd be lots of people eager to rake once the leaves began to fall. A world lit by bioluminescence would be pretty neat but it all sounds pretty complicated and I'm a bit nervous about nano-anything.

What I know would be nice is being able to see the moon and stars again. 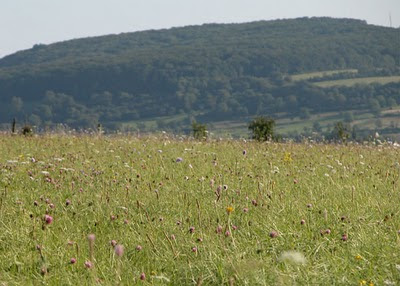 What looks like an ordinary field of grass, flowers and baby trees is actually quite remarkable because, just five years ago, it looked like this: 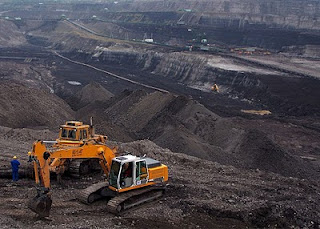 A group of scientists at the Technical University of Munich wondered how to best restore a natural ecosystem to an open coal pit not far from the city. Rather than haul in tons of soil and carefully place vegetation, what they did was cover the pit in a layer of clay and let an artificial water basin form. Then they left it alone - other than taking samples to check soil enhancement. 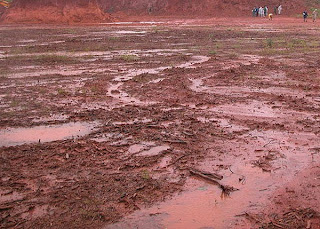 They noticed the first cloudburst created furrows where water ran off and washed away the clay. The next rain made the furrows wider and deeper determining the future course of the water flow and where the plants would grow. The first trees weren't expected for at least 20 years but black locust trees germinated and their root's nitrogen fixing bacteria make them an excellent early colonizer of the disturbed area.

Five years later the scientists who have been been able to capture a lot of information about the natural development of a new ecosystem have been astounded by nature's resilience. It certainly goes to show that Mother Nature really is a brilliant designer and doesn't need human interference in her affairs.

After having read Alan Weisman's 'The World Without Us' a few years ago, I'm confident Earth will do okay but it would be nice if we could be here to witness the healing. 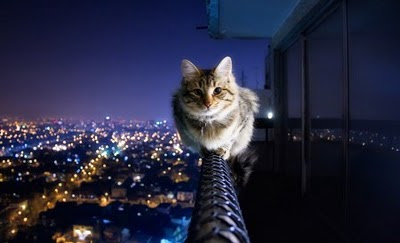 I never post pictures of cats because I don't have one anymore but I loved this photograph the minute I saw it. Nice, hmmm?

Have you ever considered this?

When a cat is dropped, it always lands on its feet, and when toast is dropped, it always lands buttered side down. Therefore, if a slice of toast is strapped to a cat's back, buttered side up, and the animal is then dropped, the two opposing forces will cause it to hover, spinning inches above the ground. If enough toast-laden felines were used, they could form the basis of a high-speed monorail system. 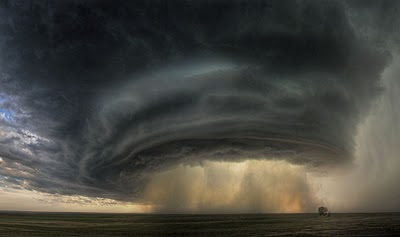 Spaceship or cloud? What looks like the apocalypse is a supercell thunderstorm that was photographed near Glasgow, Montana last summer. If you look closely you'll see a little smudge on the lower right.. a tree. We did run into some high winds and a couple of storms as we crossed the country, including Montana, in August but I'm very glad we didn't see one of these along the road. The picture's even more amazing if you enlarge it.

I'm not usually a storm of activity anyway but December is always an especially low month for me. I think I'll go easy with personal expectations for a while and simply post things that interest me, what I usually do, but with much less commentary. Has anybody else been having problems with personal energy levels lately?

neptunia and her beachball 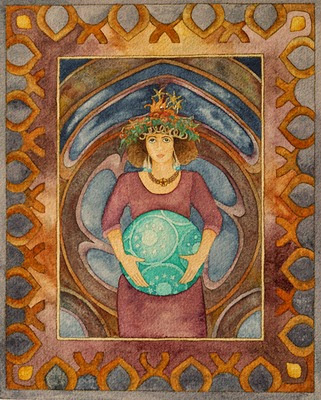 It occurred to me if scientific thought and education based on cooperation rather than competition was encouraged, we'd have a much better chance of not simply surviving but flourishing. If the world was run on evidence-based science we'd be investing in major projects to develop and deploy clean renewable technologies. We'd work toward ending the spate of curable diseases and the hunger that kill eleven million children every year. Instead, we're seeing huge amounts of money being funneled into the hands of the super-rich who have no long range plan in mind at all other than increasing their own wealth in a world that's at the brink of disaster.

In the last 50 years, we've moved away from collective thinking - all over the world people are educated in the western style to compete. Higher education in much of the west is now so expensive that students have to plan on a high paying career that will allow them to pay off their loans rather than look forward to using their knowledge and skills for positive ends. We have impoverished graduates who can't find jobs in their chosen fields and a large segment of the general population that hates science. That's not only sad but also dangerous.

I like to read and there are so many fascinating discoveries and developments that sometimes I can get lost exploring for whole sections of days. The world is an intriguing, magnificent place where, if we were to admit it, we've caused many of our own problems. I've made it a habit of stopping reading the minute somebody says, 'We should all do so and so to fix this, that or the other thing' because that will never happen. I've heard it said that not everyone brushes their teeth and what could be more basic than that?

I guess what we can do is remain open to the possibilities of a better future for everyone and learn as much as we can on our own. That includes sharing what we learn with each other until we have a society that recognizes that large things matter.

Meanwhile, I give you Neptunia, one of those paintings that didn't work out as planned.