As a child I was the proud owner of a special silver crucifix. What was peculiar about it was that in the centre there was a small glass circle that, when holding the cross up to the light and peeking inside, revealed the Lord's Prayer written on a mustard seed. It was a frequent source of amazement to me that anyone could write anything at all in such tiny script, never mind the Lord's Prayer which, as you may recall, is lengthy enough that writing it on a post-it note would take up the entire space. The crucifix disappeared long ago - I think eventually the centrepiece fell out and after that it was just a cross with a hole in the middle. 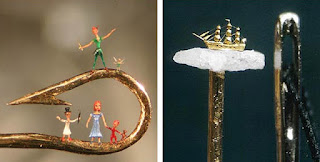 The reason I mentioned this is that a while back I came across an article about a man who makes the world's tiniest sculptures and when I say tiny I mean unbelievably, microscopically small. Willard Wigan makes his sculptures out of dust particles, sugar crystals, grains of sand etc. and then positions them inside the eyes of needles or on the heads of pins. Spending months meticulously carving his materials into micro-figures like the ones displayed above Wigan is a 'micro-miniaturist', an artist known for creating some of the world's smallest sculptures. 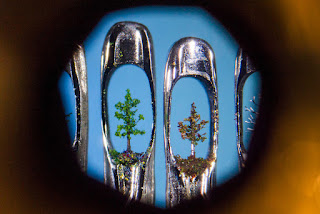 “It began when I was five years old,” says Willard. “I started making houses for ants because I thought they needed somewhere to live. Then I made them shoes and hats. It was a fantasy world I escaped to. That’s how my career as a micro-sculptor began.”

Willard’s micro-sculptures are now so minute that they are only visible through a microscope. Each piece commonly sits within the eye of a needle, or on a pin head. The personal sacrifices involved in creating such wondrous, yet scarcely believable pieces are inconceivable to most. Willard enters a meditative state in which his heartbeat is slowed, allowing him to reduce hand tremors and sculpt between pulse beats. Even the reverberation caused by outside traffic can affect Willard’s work. Consequently, he often works through the night when there is minimal disruption. 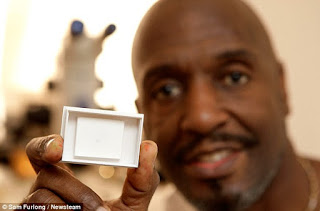 I've seen pictures of Willard Wigan's studio setup and have seen him interviewed, but after searching the internets looking to find how these sculptures could be made and what tools could possibly be used I'm still at a loss. It's either magic or something so close to magic it makes no real difference. I still wonder about the Lord's Prayer on a mustard seed too, but I know it was real because it was mine for a time. 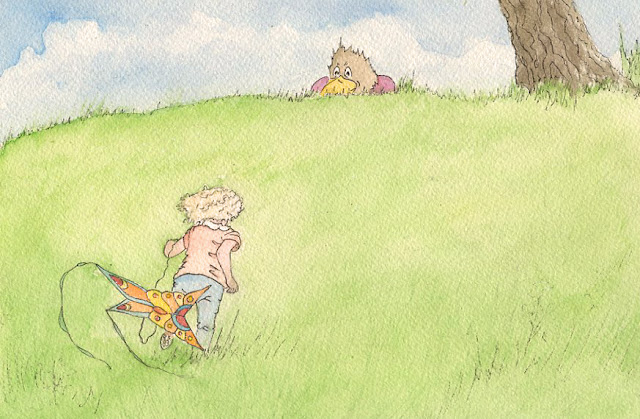 Almost every day I read the news because I want to stay informed about what is seemingly going on in the world outside my house and neighborhood. These days this is an unpleasant experience. The more I read the more worried I get. Things do not seem to be going well. The news about what is going on out there and what's going on inside myself seem mutually to freeze one another into place and a desperate kind of negative reinforcement takes place.

But when I put the computer aside to read a book, listen to music, paint or go for a walk I begin to thaw out. The frightening aspects of the world disappear and my body and mind relax into a state that may be the opposite of distraction. Art and direct contact with the world of the senses saves me from freezing. I wonder if people naturally tend toward ice (or stasis) as we crave a fixed sense of things and reliable truths we can depend on. It seems to me we love young children and the idea of childhood because through them we can re-experience a time before the self freezing, necessary for gaining discernment, took hold.

Imagination soothes the body, warms the soul in a reality wider, deeper, and more mysterious than we can directly sense or rationally know. Imagination sees into and through the apparent world to another world, luminous and significant.

from: Talks with Crow 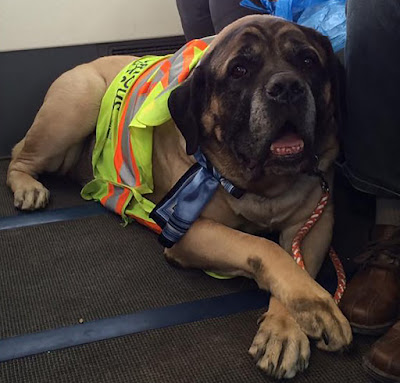 From what I've read it appears the terrible fires are still raging around Fort McMurray in Alberta. It's a sad thing and sadder too to think just how stuck so many of us are in the current economic paradigm. We don't like what burning fossil fuels is doing to the environment but at the same time people need jobs. It's just the same for every other unpleasant business or practice we might condemn.

I did find out one thing that happened during the major evacuation that I'd worried might have been forgotten. People weren’t the only ones who needed to escape, hundreds of pets needed to evacuate too. While airlines typically restrict how many animals can be on board, for a number of pilots, the choice was simple: no matter what the rules are, those pets wouldn’t be left behind.

Pilot Keith Mann, Suncor Energy’s manager of flight operations, is the owner of a “four-month-old golden retriever” and empathized with those trying to save their furry friends. He said, “the terminal was quite a sight. Just full of animals. We did everything we could to keep pets with their owners, and insure that the flights were safe. That’s the Canadian way. We wanted to help.”

For about 50 hours, his planes saved cats, dogs, bunnies, frogs, hedgehogs, and even a chinchilla from the inferno. At times, there were close to 40 animals on board one flight, yet Mann reported that the trips were mostly peaceful. 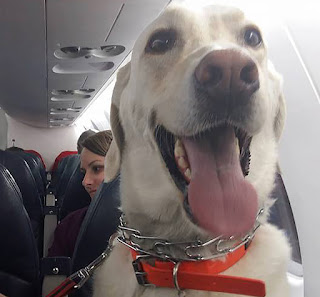 See? A nice story. Hopefully it won't be long before Canada, among many other countries, gets behind diversifying its economy. I'm sure that would make many more people and animals feel safer again. 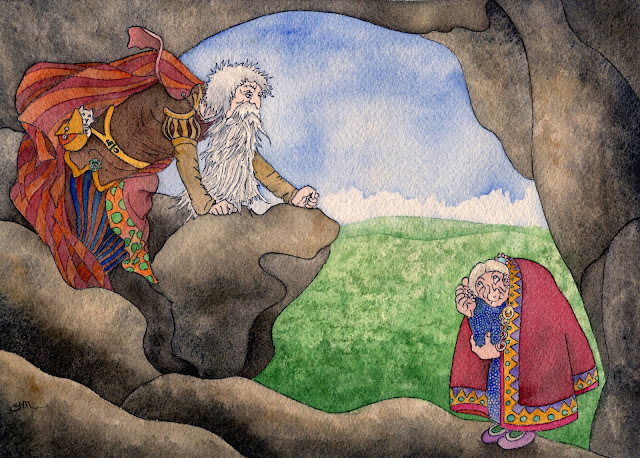 I couldn't think of anything to write that would match this new picture so I went instead to look for a story I read about a few months ago. It's an old tale anyway so I don't suppose you'll mind me having waited a while to tell it.

Unexpected teleportation must come as a shock. Consider the case of Gil Pérez:

Señor Pérez, a soldier in the Filipino Guardia Civil mysteriously vanished from his sentry post in Manila, on October 23rd, 1593 and reappeared in the Plaza Mayor of Mexico City on October 24th, 1593.  At the time of his appearance in Mexico, Pérez was dressed in the resplendent costume of the Palacio del Gobernador in the Philippines, and immediately reported that moments before his bizarre transport to Mexico City, Governor of the Philippines, Gomez Perez Dasmariñas has been axed to death by Chinese pirates.

Since instantaneous travel from Manila to Mexico City is largely unheard of even today (given the state of air transport, somewhere along the line a flight would be cancelled), Spanish officials in Mexico were understandably dubious in 1593, and jailed poor Pérez on the assumption that he was a Spanish Army deserter.  He was also questioned unproductively by the local office of the Inquisition (which no one expected).

Two months after his sudden arrival, a Spanish galleon arrived from Manila with (1) news that Gomez Perez Dasmariñas had indeed been axed to death by the Chinese on October 23rd, (2) that Gil Pérez had been seen in Manila on the same day and was positively identified by a witness on the newly arrived galleon, and (3) weirdness was clearly afoot.

Pérez was then released; returning to the Philippines to resume his previous posting, and nothing important was heard about him after.  Considering that in the late 16th Century Pérez managed to travel 8900 miles in less than a day and deliver accurate information, with no understanding of where he was or explanation, I would say the absolute silence regarding his later life manifests an overwhelming degree of modesty.

If subatomic particles can be in two places at once, why not members of the Filipino Guardia Civil?