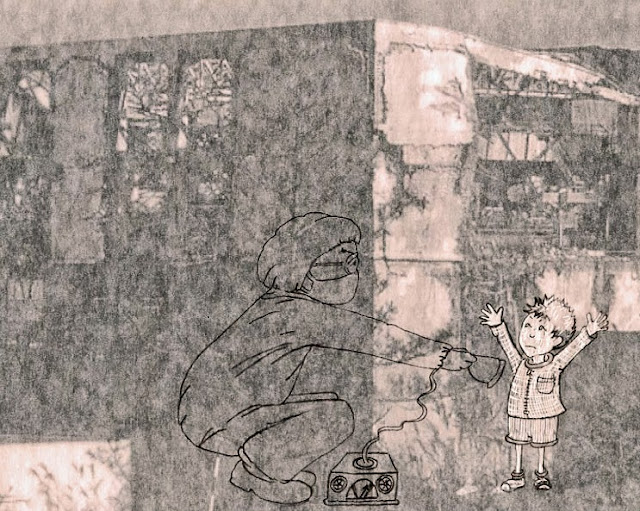 Of all the pictures I've seen since the disaster at Fukushima commenced in March of 2011 it was one of a small child being scanned with a Geiger counter that affected me most. This is my version with a photograph of the Number 4 reactor building in the background.

I'm not going to rant about the dangers of nuclear power but to say we never did 'harness the atom'; what we did instead was to catch the biggest tiger we ever met by its slashing tail.

I'll also mention, just in case you haven't heard, that Tepco is planning to try to remove the spent fuel rods from the damaged reactor Number 4 building beginning in November.

It's true that something needs to be done but I'm not confident Tepco can be counted on to get this right. Neither is Crow. 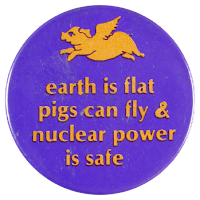 I promise to return to my usual light-hearted topics next month. 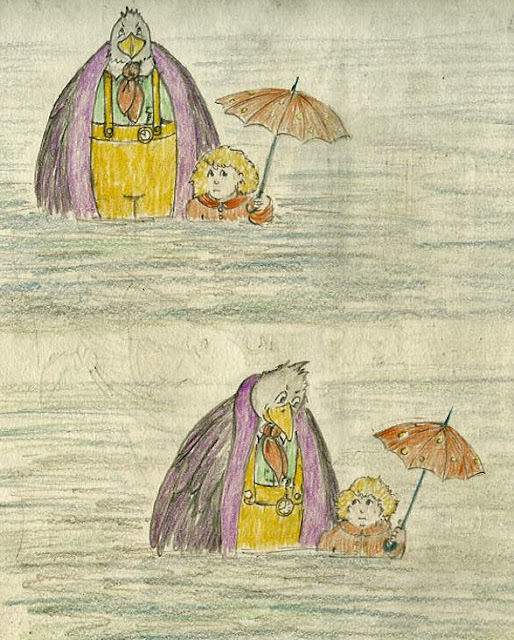 Just a few days ago our friend David Suzuki gave a speech in Australia at the University of New South Wales in which he charged the new Prime Minister, Tony Abbott, other climate change denying politicians and the ultra rich with 'criminal negligence' for their willful blindness.

"Environmentalism is a way of seeing our place within the biosphere. That’s what the battles were fought over. The barbarians – that is, many of the politicians and corporate executives that environmentalists have been fighting all these years – are driven by a totally different set of values, by the drive for profit, for growth and for power."

Later in an interview he was asked, "David, you've urged, at least twice, that legal ways should be found to jail politicians for denying what you call the science of climate change. David, do you still hold that view?"

"You bet. I think there is a category called willful blindness. Our problem is we have no means of holding our so-called leaders - people we elect to political office to lead us into the future - we have no way to keep them accountable, except booting them out of office. But the reverberations of what they do or do not do today are rippling far beyond the coming years. There will be generational impacts. Now, if you have people who stand up to take positions of leadership and they deliberately suppress or ignore information vital to making an informed decision, I think that's willful blindness, and willful blindness, I understand, is a legal entity that you can sue people for."

Crow and I agree on behalf of all of those who will inherit this fine planet.
♡
Posted by susan at 12:26 PM 21 comments:

Crow and the Druid 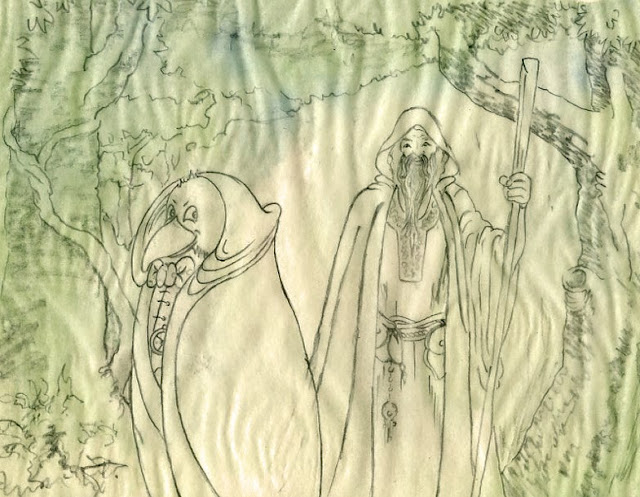 September being a changeable month in these parts, Crow and I were spending an afternoon reviewing his archives while a drenching rain spattered the tall arched windows that overlook his terrace. Just as I was about to pour the tea he thrust an old picture between me and the Royal Albert saying, 'Aha! I've been meaning to show you a picture of Gaith, my old Druid friend, and here is one of both of us scratched upon this piece of bark. Amazing how well this stuff keeps, isn't it?'

I've long stopped being surprised at the immensity of Crow's historical social circle, but he'd never mentioned Druids before. I made myself comfortable in my favorite of his wing back chairs, took a sip of Oolong and sat back to listen:

'It probably won't surprise you to hear that even in the dim, dark past there were crazy, power hungry male persons who made a general nuisance of themselves by making up excuses to kill their neighbors and take their land. The first thing they always did was to demand that the young men in their kingdoms supply themselves with pointed sticks or whatever, swords being both rare and expensive, and join in the battles. Some young men who weren't pleased with this mad idea ran away to the forest.

'The forests of Europe and old England were very large indeed. Still, it wasn't easy to get by on your own and certainly there were no modern conveniences like waterproof shoes and tents - never mind nicely packaged emergency food supplies.

'On this particular fine morning, Gaith and I had been strolling along a path overhung by the branches of sacred oak trees when we came upon a weary looking but handsome youth sitting by a brook. After mutual greetings we sat and shared some food and listened to his reasons for preferring a life of peace. Rather than going to war he had run away to a place where he hoped to enjoy life and creation, learn its wonders and strive for answers to the big questions. My friend Gaith, being a Druid, one of those rumored to have strange powers, invited him to join his band as a junior member.

'Whether they were called Yogis, Magi, Lamas, Monks or Druids, all of them strove to learn. They developed techniques and applications; they dreamed dreams and studied nature intensively. As it took a very long time to become a Master Druid, perhaps twenty years or more, they arranged their membership into sections (like colleges) that depended upon knowledge and individual attainments. They also developed a brilliant plan designed to lessen the violence of the crazy men. What was it? First, you have to understand they already had much to offer by their abilities with Astrology and calendars; they knew much about plants and the healing arts. They also knew how to manipulate materials and some, like my friend Gaith, were experts in speaking the Language of the Birds. That's how we first became friends (he told some excellent people jokes). What the Druids offered freely to the crazy men who ruled at that time were the members of their lowest college, the Bards.

'Our new young friend who was called Oisin would be trained as one of them, a singer of history. From what I heard later he did well and even stopped a war or two by singing Sagas of previous encounters between the combatants. Of course, the other king also had a Bard and the two likely collaborated to mold a peace. This was the foundation of Diplomacy vs mindless War.'

Rocking back on his perch, Crow snagged a piece of fruitcake, arched his brow and remarked, 'Aren't you glad to know there are still Druids in the world today?'

Yes, yes I am, but we could always use a few more. The rain having stopped by then, we went for a walk by the sea.

doing what becomes us 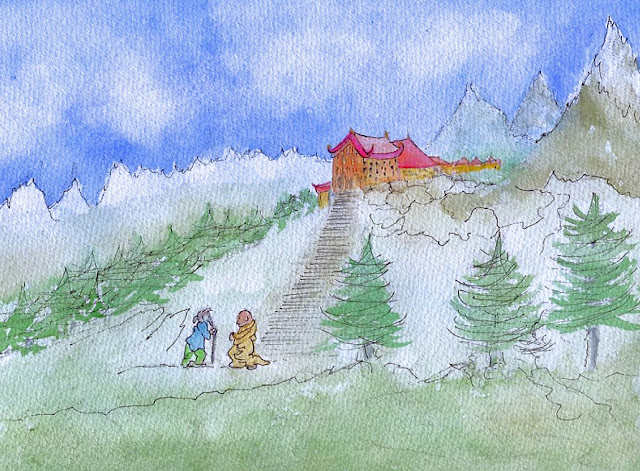 A formerly thriving monastery is down to its last three monks, and the place has lost all of its spiritual influence. The Abbot walks down the long stairs to consult with a passing well-known wise man who tells him, “I don’t know how to solve the problems of your monastery, but I do know that one of the three of you that remain there is actually the Messiah.”

The Abbot returns and repeats this to the other two monks. Each of them considers inwardly, “Well I know it’s not me, so it must be one of these other two.” Thus they all start treating each other with the greatest of reverence, kindness, respect and love, thinking they might be in the presence of the Messiah. The positive energy that this generates begins to infuse and radiate out from the monastery, and as new visitors pass through, they are infected by it and choose to stay on as monks, and within a short time, the monastery is once again a vibrant and thriving institution.


It's a pretty cool story and one whose premise is inarguable (if you don't believe me, ask Jesus or the Buddha), but I'll have to agree with whomever first mentions that things don't often work out that way among most of us humans. There are so many potential tragedies in process right now that I almost have to wonder how we've lasted as long as we have. Perhaps it's because Progress as we know it now wasn't invented until about 300 years ago. Before that people mostly did what they'd always done, even if that did involve grabbing grandfather's sword or pike and heading off to battle every so often. At least then the battles were generally right on one's doorstep and there was no question of punishing strangers who lived thousands of miles away. Okay, there were the Crusades that were motivated by religious mania and greedy land grabbing in the Americas etc., but my point is that things didn't start getting really crazy until fossil fueled industrialization became endemic.

There's a very old legend among the mystical teachings of several religions that there's always a small group of hidden saints who are 'holding up the world' but who live out their lives as ordinary people. We can never know for sure that the clerk at the market or the bus driver who greets us with a smile isn't one of them. Since we can't know who is or who isn't an Enlightened human being, why not treat everyone as though they are? I rather like the concept that there's no such thing as Enlightenment as that term indicates a changeless state (and there's no such thing in Reality), but what's possible for all of us is Enlightening as a verb, or Becoming if you prefer.

The book the monk story is from (and now own as my very first digital copy) is called 'Why I Am Not Enlightened' and was written by a very wise and funny Western spiritual teacher called Elias Sobel. I recommend it to you.

As Crow says, 'Even if you people can't be perfect, you can at least be nice to one another'.
♡
ps: I didn't get a Kindle but have downloaded a free Adobe E-reader.
Posted by susan at 12:31 PM 15 comments: