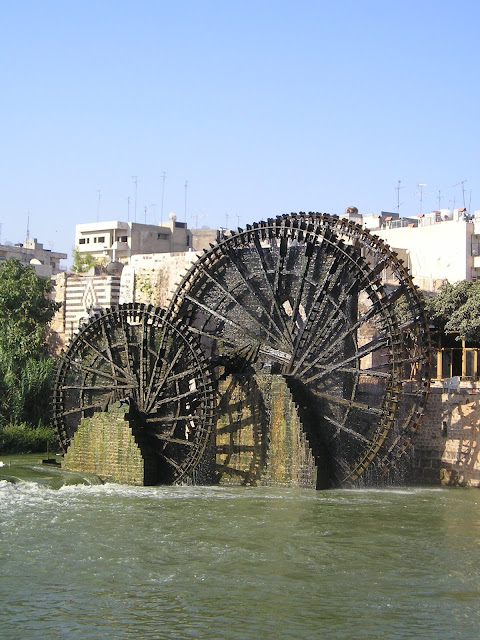 This is a noria, one of the great water wheels of Syria. The origins of them are obscure but it is thought that they were invented in India or the Hellenistic Near East in the centuries preceding the birth of Christ.  It is also believed that they were pivotal in the Muslim Agricultural Revolution which started in the eighth century and lasted several hundred years. Islamic Spain also used the noria and there are still a number there too.

The noria of Hama were almost industrial in their capacity. The largest has 120 water collectors and was capable of delivering almost one hundred liters of water each minute to the aqueduct.  Although none of the larger noria are now in use they are being maintained by the Syrian government so that future generations can witness the ingenuity of centuries gone by for themselves.

Having spent September telling myself tomorrow is the day I'll get around to drawing a picture and writing a blog post that particular tomorrow remained elusive. Do you ever have times like that?
♡
Posted by susan at 6:41 PM 16 comments: