arbor day with another friend of Crow

"They can count, learn and remember; nurse sick neighbors; warn each other of danger by sending electrical signals across a fungal network known as the 'Wood Wide Web' – and, for reasons unknown, keep the ancient stumps of long-felled companions alive for centuries by feeding them a sugar solution through their roots."

According to a New York Times article these are just a few of the secrets that Peter Wohlleben, a German forest ranger and best-selling author, has learned about trees. Upon coming across a pair of soaring beeches in the forest, Wohlleben, the author of the runaway hit book “The Hidden Life of Trees: What They Feel, How They Communicate – Discoveries From a Secret World,” observes:

“These trees are friends. You see how the thick branches point away from each other? That’s so they don’t block their buddy’s light. Sometimes," he adds, "pairs like this are so interconnected at the roots that when one tree dies, the other one dies, too.”

Wohlleben’s work could be changing the way any people think about trees. Putting the German forest back in the spotlight, he is making the case for a popular reimagination of trees - which the modern world seems to think of as 'organic robots', designed for little more than to supply us humans with oxygen and wood. With a mix of scientific research and his own observations - the 51-year old Wohlleben studied forestry and has worked in the forest since 1987 - the man who speaks for the trees does so in decidedly anthropomorphic terms. Which has irritated some German biologists who question his use of language to describe life in the forest. But Wohlleben says this is exactly the point. “I use a very human language. Scientific language removes all the emotion, and people don’t understand it anymore. When I say, ‘Trees suckle their children,’ everyone knows immediately what I mean.”

After years working for the state forestry administration in Rhineland-Palatinate and then as a forester managing 3,000 acres of woods near Cologne, he began to understand that contemporary practices were not serving the trees, or those who depend on them, very well. “By artificially spacing out trees, the plantation forests that make up most of Germany’s woods ensure that trees get more sunlight and grow faster, but creating too much space between trees can disconnect them from their networks, damaging some of their inborn resilience mechanisms.”

Now this I really liked and I'm sure you'll understand why when I tell you that after researching alternative approaches to forestry he began implementing some revolutionary concepts - replacing heavy machinery with horses, stopping the use of  insecticides and allowing the woods to become wilder. The forest went from loss to profit in two years. 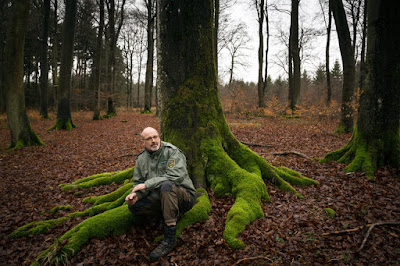 Now trees have found another articulate spokesperson working in the German forest. Crow says he hopes this may be the beginning of the return of the Great Forests of earlier times. They would be a vast improvement. 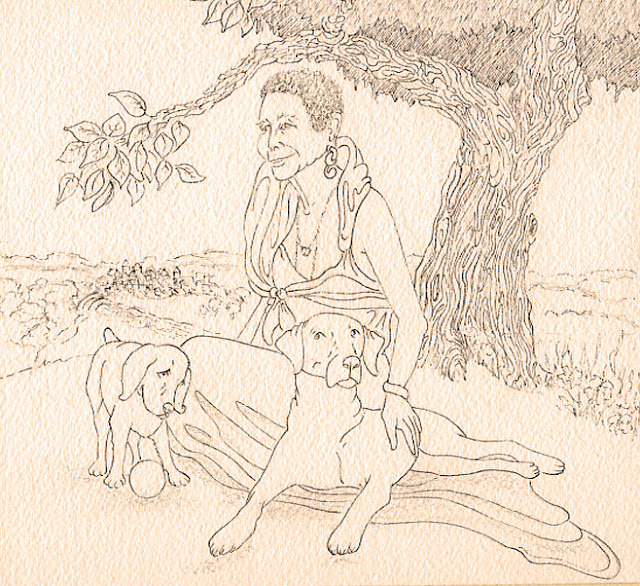 A few days ago we'd stopped at one of our stations in the park where a family of crows meet us for lunch (their lunch, that is) when I noticed someone shouting and waving from higher up on a cross path. Since a group of people were passing with their dogs I assumed he was greeting friends and we continued on our way. A few minutes later the young man and his girlfriend caught up with us and, gesturing at the big brown dog they had on a leash, asked if she was ours. Our answer was no, but we patted her and talked to them for a few minutes. They'd found her wandering lost wearing just a collar with no tags. When I asked about the leash he told me it was his belt. I wonder how many young guys wear belts these days? After a few minutes they went off in the opposite direction with the plan of putting a note online before taking her to a shelter. We were kind of sad about the sweet natured beast who appeared to have been abandoned.

Later on our walk we decided to take a different path from one of our usual ones. About ten minutes along it I recognized the big brown dog walking behind a different young couple. As they passed I stopped them briefly to ask how they'd found her and heard, 'She'll go off with anybody'. I should have mentioned she needed some identification but they'd kept on walking and the chance was gone. We were glad to see she'd been reunited with her owners and still just a little bit sad because her owners were idiots. She deserved better ones.

The way the dog trots out the front door
every morning
without a hat or an umbrella,
without any money
or the keys to her dog house
never fails to fill the saucer of my heart
with milky admiration.

Who provides a finer example
of a life without encumbrance—
Thoreau in his curtainless hut
with a single plate, a single spoon?
Ghandi with his staff and his holy diapers?

Off she goes into the material world
with nothing but her brown coat
and her modest blue collar,
following only her wet nose,
the twin portals of her steady breathing,
followed only by the plume of her tail.

a public service rant by Crow 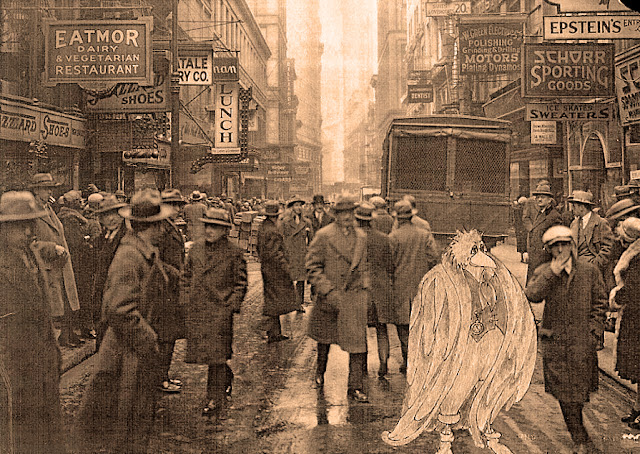 Have you ever heard a Crow chortle? It's a little disturbing.

A few evenings ago while I was tidying up one of his albums, Crow relaxed on his antique perch by the fire reading the news. After the chortle I heard a distinct snicker. Since by then he'd caught my attention I had to ask what was causing him such amusement:

It appears no matter how long I share the world with your species I will never understand the logic of humankind. Listen to this:


"America’s infrastructure is so bad the self-driving cars can’t even find the lanes on the road.

Shoddy infrastructure has become a roadblock to the development of self-driving cars, vexing engineers and adding time and cost. An estimated 65 percent of U.S. roads are in poor condition, according to the U.S. Department of Transportation, with the transportation infrastructure system rated 12th in the World Economic Forum’s 2014-2015 global competitiveness report.

Tesla, Volvo, Mercedes, Audi and others are fielding vehicles that can drive on highways, change lanes and park without human help. But they are easily flummoxed by faded lane markers, damaged  signs or lights, and the many quirks of a roadway infrastructure managed by thousands of state and local bureaucracies."

I love stories like this, in which a robot can’t even manage with great difficulty to do what any human being or crow can with ease. The proposed solution is always “transform the world to suit the needs of the robot” and not to recognize the limitations of technology. Why can't the genius entrepreneurs of Silicon valley grasp the fact that in the real world “faded lane markers, damaged signs or lights” are normal, and part of the reason for that is the systematic withdrawal of funding for public infrastructure that has been supported by them.

Only projects that make use of computer software have any interest for those people. While they ignore the many serious concerns (like how to increase public transport, save creatures from going extinct, or finding a cure for cancer etc.) they waste time, money and resources on inappropriate technological solutions to non-existent problems. Do you remember the big story a week or so ago when the Google data center beat a human Go master three out of four games? What was hardly mentioned at the time was that the machine used 50,000 times the wattage of the human player.. and all it can do is play Go.

The cars are flummoxed? So are the humans! You don’t need artificial intelligence. You need some real intelligence - coupled with a set of ethics. Hmpff.


It was obviously time for us both to calm down so I poured us both a snifter of Remy and we nibbled on fruitcake while we watched Michael Grab work his magic:

Quote of the week:

Technology is destructive only in the hands of people who do not realize that they are one and the same process as the universe. Alan Watts
Read more at: http://www.brainyquote.com/quotes/authors/a/alan_watts.html
~ Alan Watts