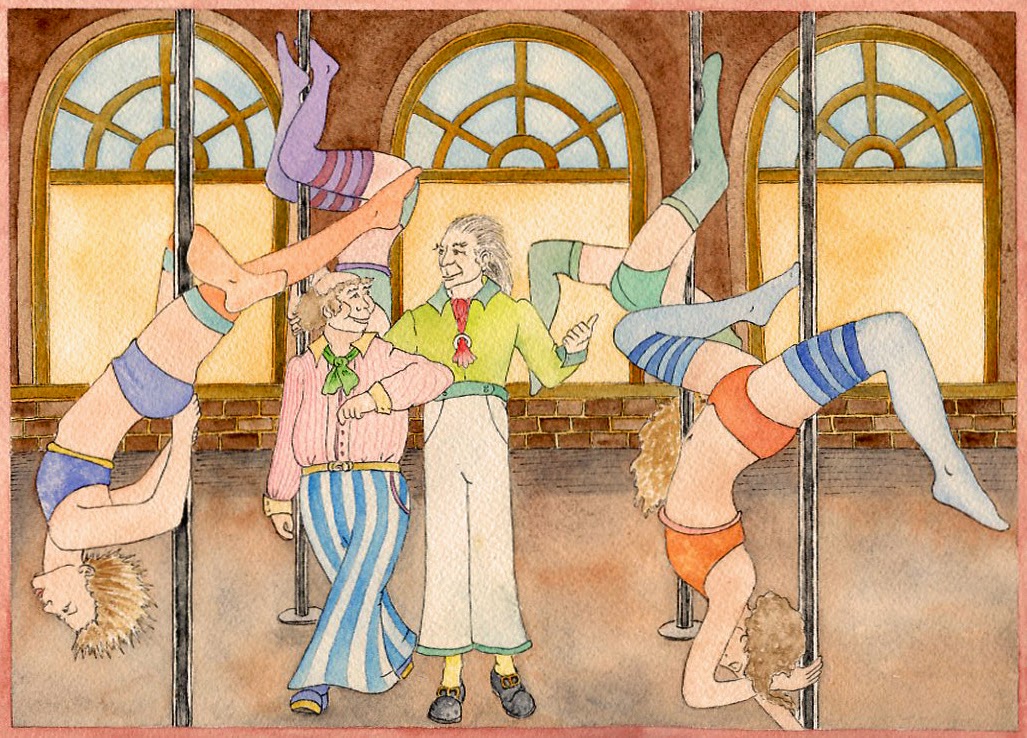 Some weeks ago I bought copies of two novellas by my friend and co-blogger Andrew MacLaren-Scott. 'Sample 717' and 'After the Lady Lord' chronicle the adventures of Edrid and Adrig, two superior beings who are scientists native to a distant civilization that is ruled by women - known as the Lady Lords. As scientists, these two could probably best be described as anthropologists, and Sample 717 could best be described as planet Earth.

Adrig, the elder of the two by several hundred years, has become enamored of our world mostly because Sample 717 has many slim and beautiful women who don't generally order men to do their every bidding - unlike the Lady Lords. The Lady Lords, who are built like Mack trucks, take great pleasure in terrorizing their puny men, even to the point of forcing them to drink a concoction called testosterjuice whenever they're feeling a bit 'broody'. You get the idea.

Adrig and Edrig decide to make a trip to Sample 717 in order to enjoy the sights, promising the chief Lady Lord (a brute from the sound of things) they'll return with a virile football player for her entertainment. They attire themselves in the only Earth clothing they have available - some 1970's gear that Adrig had brought back from an earlier sojourn. Their travel pod carries them to Earth where nothing goes quite as they planned.

Now it's not every day someone I know publishes a book or two, and while these aren't likely to cause anguish to any Nobel candidates, they did provide for an entertaining afternoon. The picture here is my interpretation of Adrig (the tall one) and Edrig's (the other one) elation when they visited a pole dancing class. 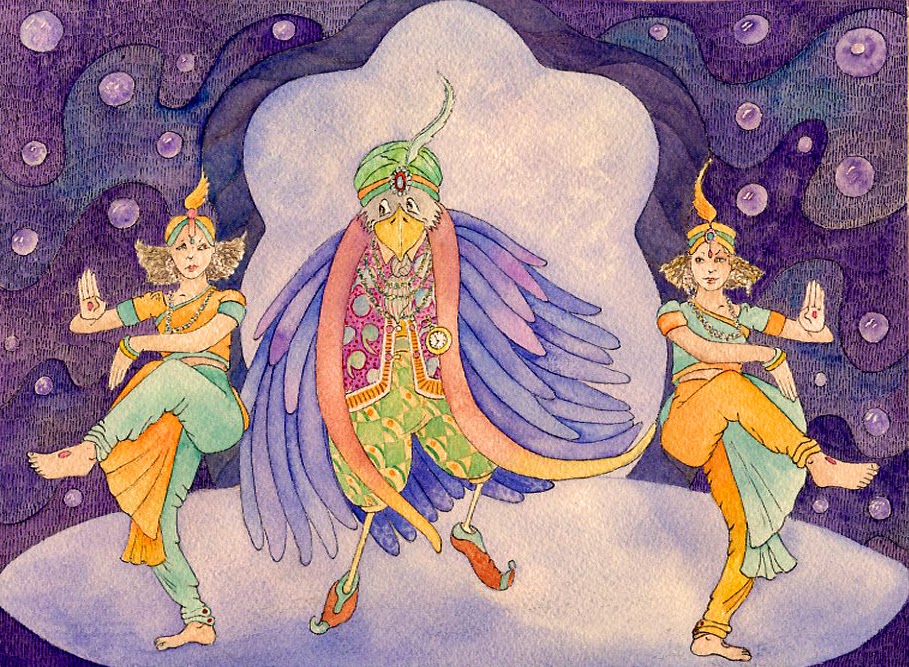 Don't mind Crow. Ever since he discovered Bollywood he's been dancing up a storm in hopes of a starring role in the next Dhoom movie. Yes, we've become big fans. While I'm not entirely sure why, the reason could be the ever intensifying bad news that requires those of us who wish to remain moderately optimistic to find diversion, or it could be because the movies are great. I prefer to think the latter.

The Dhoom movies are basically high-tech heist thrillers that use bits and pieces filched from the global action-movie repertoire to lend some cutting-edge flash to Bollywood’s loose-knit “cinema of attractions” format. They feature a globetrotting succession of elaborate robbery and chase sequences. Judged purely as a crime movies, they are messy, littered with unanswered questions and dangling plot threads. As entertainment their variety show atmosphere and low 'high tech' special effects are sheer joy to watch. And, true to Bollywood tradition, there is always much singing and dancing.

In the first movie, Inspector Jai Dixit demands assistance from Ali, a petty criminal motorcycle mechanic, to help him capture a gang of thieves. Supercop Jai says he'll let him off the hook if he proves useful. Feel free to envision a pair of characters not dissimilar to Martin and Lewis.

The basic story line for this one is that the police in Mumbai have been completely baffled by a series of robberies done in broad daylight. Called in as an expert, Inspector Jai Dixit asks for a map (imagine a subway map). The inspector circles five stations in a row where the crimes occurred and announces - to everyone's total surprise - it's the sixth station that will be the next target!

While at a stake-out on a dark rainy night Jai and Ali spot a poor girl sitting in her bright yellow Lamborghini that won't start. Ignoring Inspector Dixit's remonstrances to stay in the police car, Ali goes to help. Dance ensues - including 20 guys who get out of cars parked along the street to act as backup dancers. Ali tends to fall in love with every pretty girl he meets and dreams of being a family wala.

Now how are you going to distract the cops while you pull off the big heist at a casino? The answer, of course, is a dance!

Jai and now official police officer Ali are after a dashing cat burglar - a wall-climbing, skydiving master of disguise known as 'A' (Hrithik Roshan, one of the most gifted dancers I've ever seen). This international thief who has been robbing his way across the globe in bold, daring heists is on his way to Rio and our intrepid officers are hot on his heels. What better way to catch a thief than with another thief? Enter Sunehri, a beautiful young woman who also owes her freedom to Inspector Jai Dixit.

The plot is predictable, and at times ridiculous, but the music and dancing are over the top marvelous. Despite the fact the overarching storyline is about the police chasing after a master thief, there is very little violence and (being an Indian film) no gratuitous sex scenes. Nevertheless, the sensuality expressed in the dance numbers is very powerful. These are, after all, the people who came up with the Kama Sutra in 400BC.

Action in the third movie takes place in the very exotic locale of Chicago, IL, where 20 years previously a cruel and arrogant banker closed down The Great Indian Circus, a place of magic owned and operated by young Sahir's father. Rather than lose his life's work the father chooses suicide as Sahir watches.

The scene switches to the present day with Sahir (now played by Aamir Khan) as a vengeful thief out to destroy the very bank and banker who destroyed his father's life. He does this by committing outrageous robberies, throwing all the money he can't carry to the street as he runs down the sides of tall buildings (yes) and escapes by motorcycle. Who else would be asked to solve the crimewave but our trusty policemen from Mumbai, Jai and Ali?

What can I say but it gets crazy. What else can I say but that the song and dance numbers were even more spectacular than the ones in Dhoom 2? So far all the dance numbers I've attached as links so you can watch them as you choose. When it comes to Dhoom 3 I have to post two videos. The first, called 'Malang', is the spectacular stage show presented at the mid-point of the movie, while the second is 'Dhoom Machale Dhoom', a musical pastiche of major scenes in the film. If you can stand full-screening these are well worth it.

If you're looking for thought-provoking plot lines and Academy Award level acting, you'll be bitterly disappointed. However, if you're a fan of musicals from Hollywood's Golden Age (1930s to the 1950s,) then you'll love India's Bollywood version.

As Crow says, 'They should find a way to bottle Dhoom Machale so we can all enjoy it'.
♡
update on Monday, Oct 20th

An article posted on The Atlantic that discusses the dismantling of sexism in Bollywood films is well worth a read.
Posted by susan at 12:58 PM 25 comments: 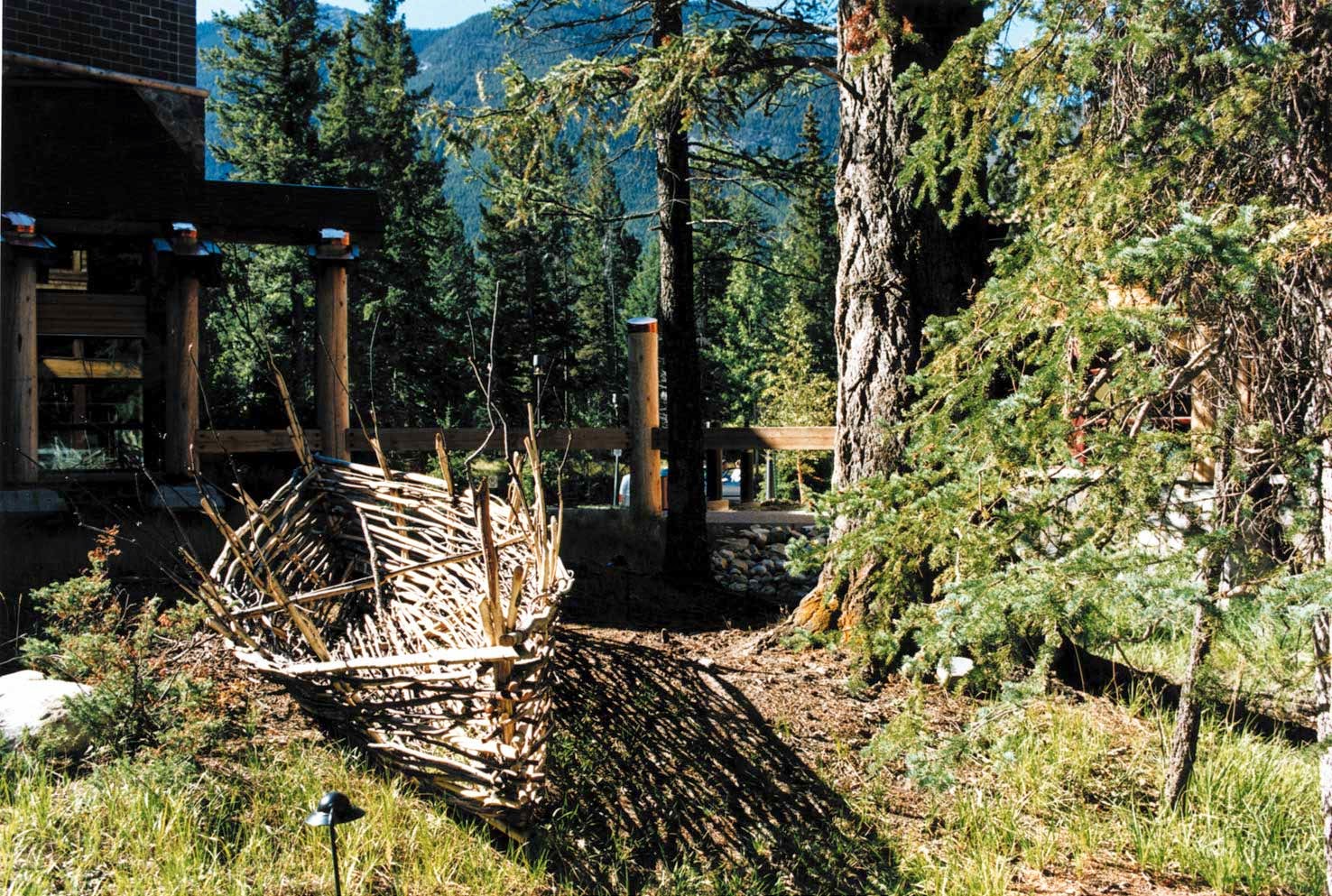 A Canadian artist, Peter von Tiesenhausen, came up with a radical solution to the problem many landholders have when it comes to having their property invaded by oil developers. What he did was to copyright his entire square mile property in northern Alberta as a work of art. The spread von Tiesenhausen inherited from his parents, a former family farm 80 kilometres west of Grande Prairie, sits atop a natural gas hot spot known as the "deep basin." He accepts that he only owns the surface of his land. The buried treasure belongs to the provincial government. It has rights to sell the resources and make him let companies onto his property to extract them, so long as he is compensated for the disturbance.

What a great idea! Around Von Tiesenhausen's home and studio, his property is studded with artwork such as a 33-metre-long ship sculpted with willow stalks, winter ice forms, nest-like structures in trees, statuesque towers and a "lifeline" or visual autobiography composed as a white picket fence built in annual sections left to weather naturally. 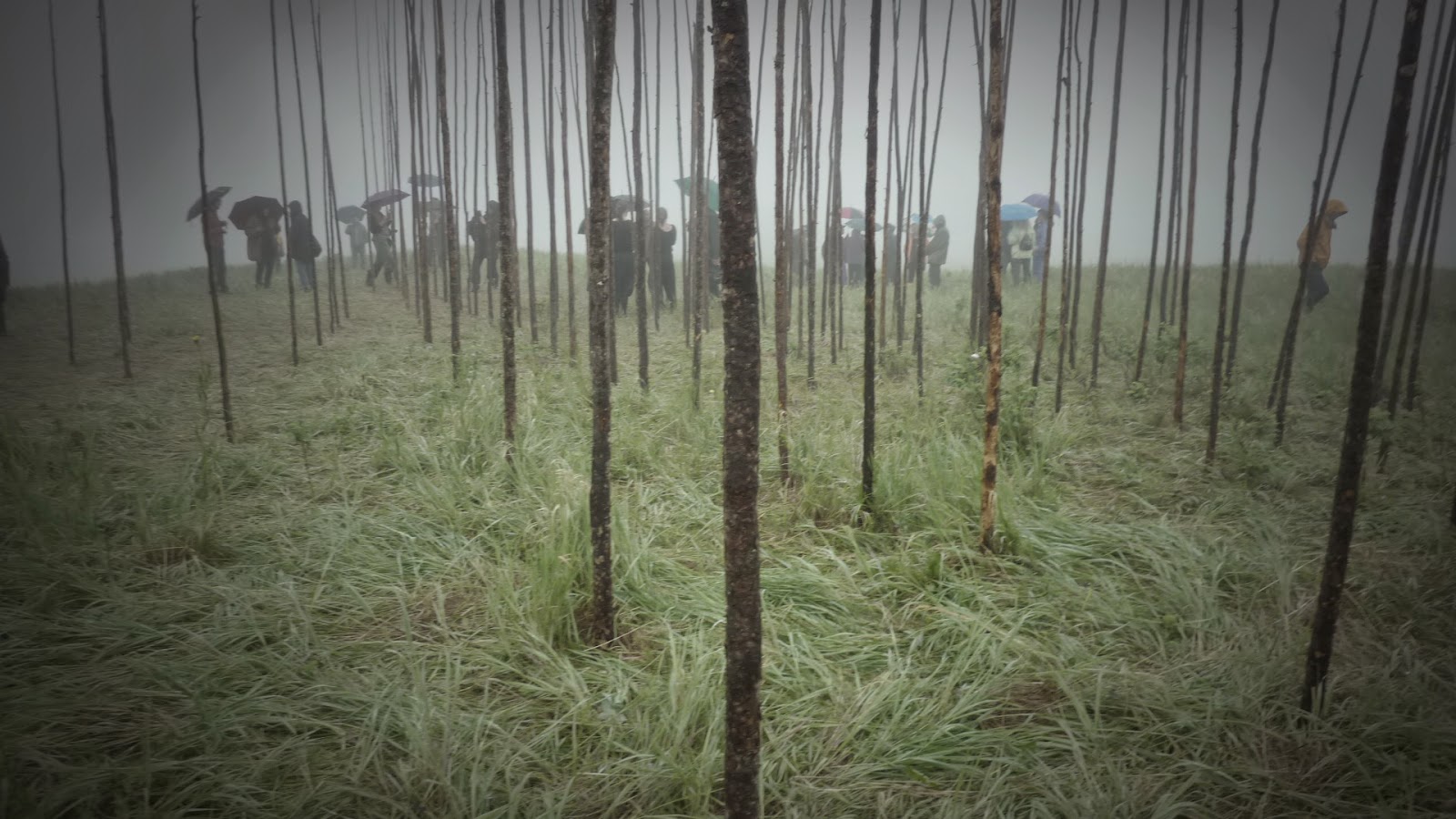 His legal move vastly increased the amount of compensation he is potentially entitled to demand from any oil or pipeline company wanting access to his place, because changing his property would be copyright infringement. "Now instead of maybe $200 a year for crop losses, we'd have to be paid for maybe $600,000 or more in artistic property disturbance."

Lawsuits have been threatened several times, but no oil and gas companies have risked a winner-take-all court case that would attract public attention and start other landowners thinking. Von Tiesenhausen emphasizes his message in the language of corporations - money. Taking a page from the books of business consultants, he demands $500 an hour from companies that want to take up his time talking to him about his land. "I demand $500 an hour. They pay. It keeps the meetings really short and they don't do it nearly as often as they used to." the artist said.

If word of this gets around there may be many more farms listed as artworks.
Goodness knows, if I owned my back yard I'd do it myself.
♡ 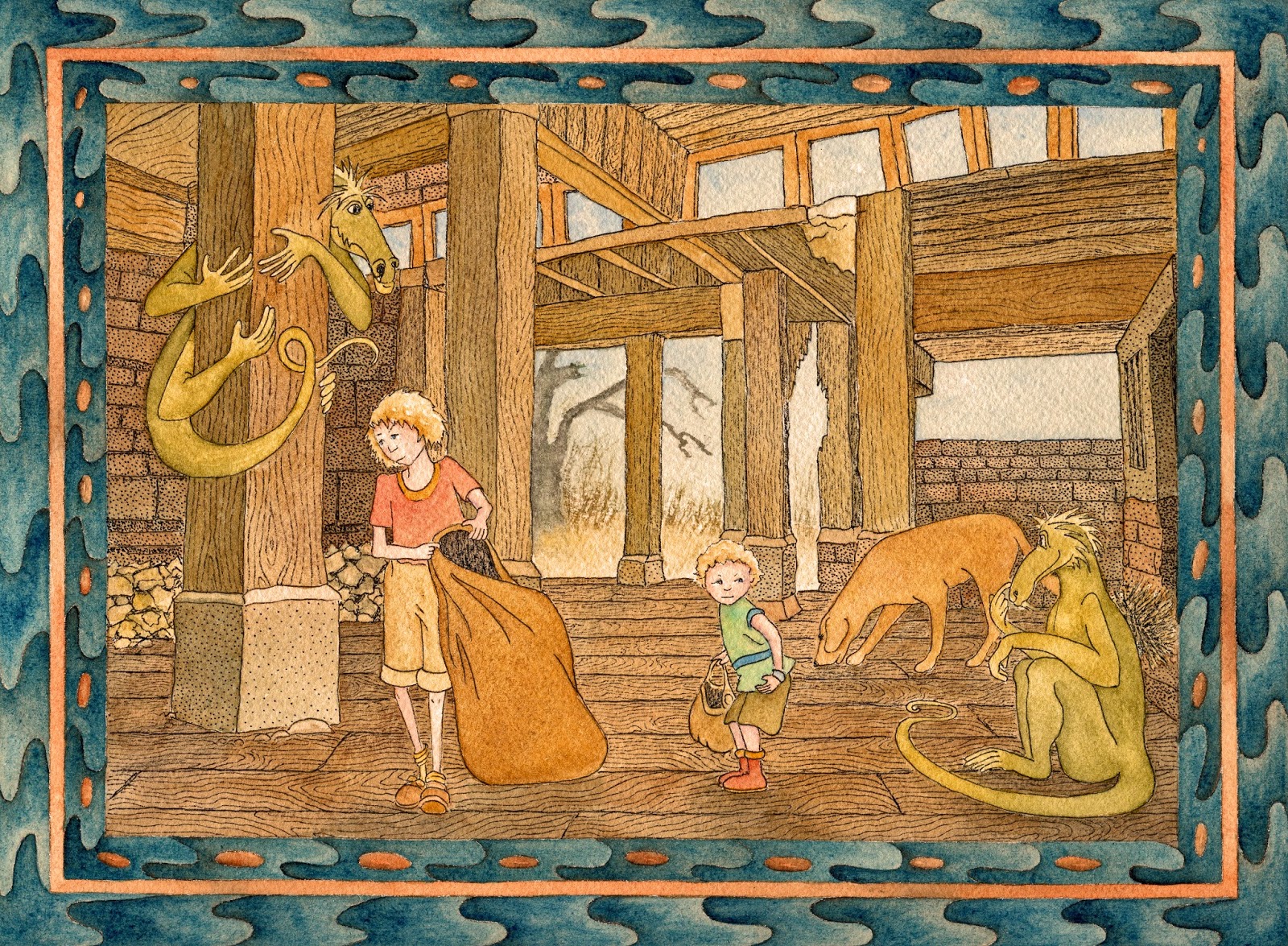 While I'm not sure the difficulty I had earlier in the week could be literally defined as a First World Problem*, having the tracker pad of my computer suddenly lose track of itself was both aggravating and unexpected. The little cursor was happy enough to move around the screen but couldn't be clicked to open anything. As you can imagine it didn't take long for me to realize just how reliant I've become on this machine that contains the records of everything of any importance I've done for the past decade or more (before being packed away four years ago, the old computer had a serious conversation with this one).

It's understood that some problems are universal - death, disease, hunger, thirst, cold, poverty, physical pain, illness - are part of the human condition and could happen to anybody. The problems of the prosperous don't fit in this class:

"I have too much cash in my wallet and it hurts my butt when I sit."

"Can’t decide whether to stay oceanfront at an all-inclusive resort or 9 mins away with a group of friends while vacationing in Jamaica!"

"My friend doesn’t have an iPhone so I couldn’t text him from my macbook."

"I had to watch a 3D movie because I didn’t want to wait for the 2D showtime."

"My Poodle can’t get a haircut today because of the humidity outside…so annoyed with stupid global warming!"

"How can I sleep when the fountain outside my window is so loud!"


You can probably see why I'm unsure about whether having my computer break was an FWP or not. I happen to live in a culture where personal computers are common and so, like everyone reading this, I do own one. On the other hand, it's not like I'm going to use its temporary loss as an excuse to indulge in in a hand of Misery Poker:

Someone who complains of a minor inconvenience while someone else in the background is being chased by a herd of enraged rhinos.

The Apple geniuses had the track pad replaced quickly and so I have returned with all my pictures intact. Yes, this is the most recent one of those - not quite as cool as the last, but okay.

Last winter I read Charles Dickens's 'Hard Times' again and was amazed I'd forgotten Mr. Bounderby - the original inspiration for The Four Yorkshiremen sketch. Here are John Cleese, Graham Chapman, Tim Brook-Taylor & Marty Feldman performing an early version of the one made famous by Monty Python: