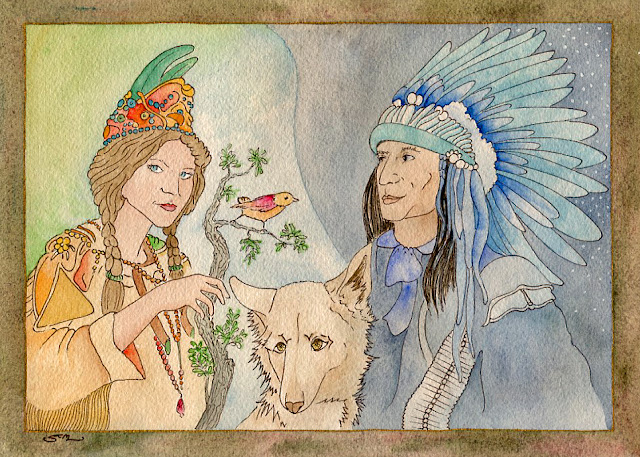 in the beginning, there were no seasons, and the world was the same every day. one day, coyote grew tired of this, and he created summer and winter. as time passed, summer and winter grew to love each other. they wished to be with each other, but had no place to meet. they went to coyote and told him these things. and so coyote built them a lodge where they could be together. he built it in the most beautiful place he knew, far from everything else. then coyote told them what he’d done, and they were happy.

a few days later, coyote saw summer. “coyote, you must help me and winter,” said summer. “we have tried to find the lodge you have built for us, but it is so well hidden that we cannot find our way.” she told coyote “you must make us a path.” coyote said he would. he asked summer how the path should be. “it should be as winter’s way is,” summer answered. “it should be still, and warm, and golden, and full of deep thoughts and memories. such a path will remind me of winter, and i will not lose my way.” “i will do it,” said coyote, and he went and made such a path.

time passed. then one day, coyote saw winter. “coyote,” said winter, “you must help me. i have tried to follow the path you have made to the lodge, but i keep getting lost. you must change the path, and make it as summer’s way is. it must be fresh, and bright, and green, and carefree and full of laughter. a path like this will remind me of summer, and i will not get lost.” “very well, i will make the path this way,” said coyote.

when coyote was by himself, he thought “i cannot make just one path to the lodge that will please these two.” and so coyote made a new path as winter had described. these two paths were fall and spring. “now each has its own way to find the lodge and each other,” said coyote, and summer and winter were pleased.


- by numb
in appreciation of 'Giving Birth to Thunder: Sleeping With His Daughter'
Native American 'coyote' stories collected by Barry Lopez

Retyped from its dot-matrix original found in a pocket
of an old handbag of mine. It was so nice I just had to
illustrate its essence. Hope you like it too. 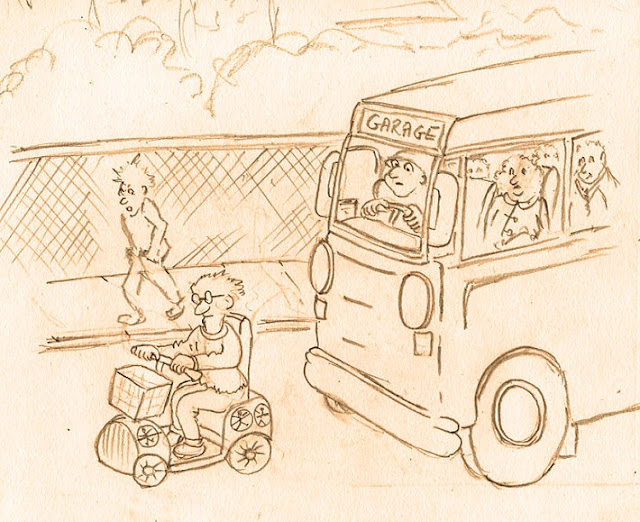 Something we saw when we were out recently. The guy was driving flat out (maybe 8mph). Only in Halifax..


We have arrived at the time of year when we see and feel some significant weather events. It rained a lot on theThanksgiving weekend (last of that hurricane) with what seemed like tree stripper winds. Then the next day showed the trees just about as full as they had been before. Better still, the frog pond at the park that had dried into a giant mud flat by summer's end had refilled and the ducks were back. Again today and yesterday we've had lots of very heavy rain and strong winds besides. Happily it all let up for a few hours, long enough for us to have a good walk in the park. The coolest part of that was when we rounded the point to the beach area to find huge waves coming out of the fog. The sound alone was absolutely mesmerizing but all the more wonderful was seeing the heave and curl of the waves as they broke far from shore and again as they burst on the rocky beach. We sat and watched for a long time.


“Politics is the art of looking for trouble, finding it everywhere, diagnosing it incorrectly and applying the wrong remedies”
– Groucho Marx