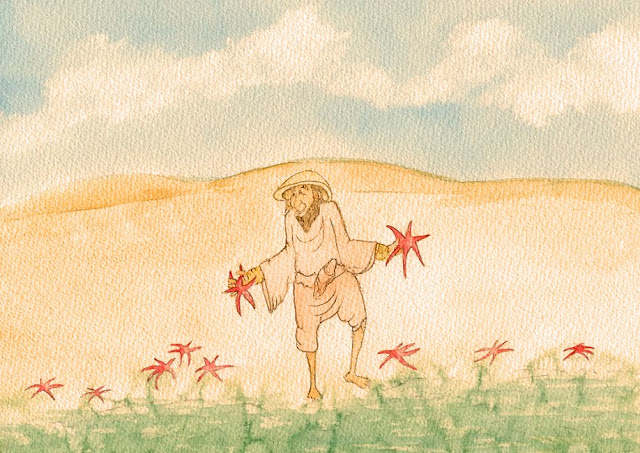 Zen master Ryokan was walking on the beach not long after a storm had blown over. Hundreds of starfish that had been washed up by the waves were beginning to die in the sharp sunlight. Ryokan picked up the starfish one by one and threw them back into the sea.


A fisherman who had been observing Ryokan came up to him. “Why do you do this? Every time there’s a storm, this happens on every beach for hundreds of miles. You can’t save them all, so what difference does your attempt make?”

“It will make a difference – to this one,” replied Ryokan, as he flung yet another starfish into the water.

This is definitely a lazy (and recovering) person's post but it's another one I like a lot.
Thanks to you all for the good wishes. 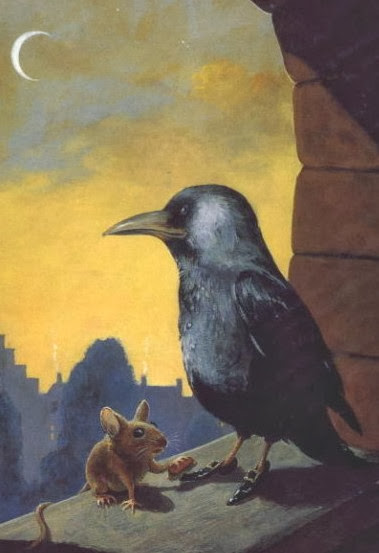 I hate not feeling well but I guess it's best to admit it and hope for a better day tomorrow. In the past three weeks I've had two surgeries to fix the tissue around a couple of dental implants. The first one became infected making it necessary to have a second surgery once the antibiotics had done their job. It may have been too soon because now I'm swollen worse than the first time and I'm getting bored  lying on the couch wrapped up in a shawl.

Maybe Crow will come by this evening and tell me another story.

At least he's been good about sharing the brandy. 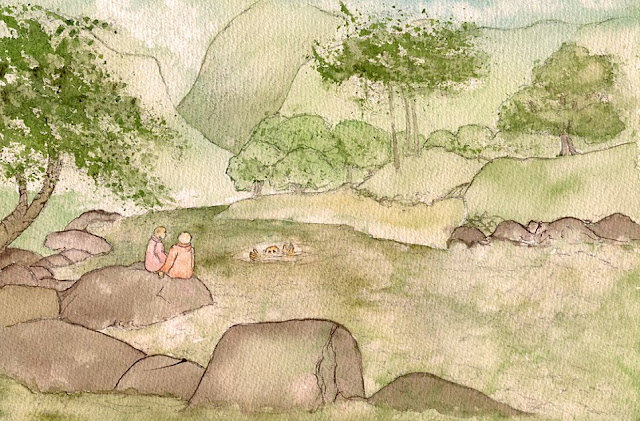 Three monks sat by a river, deep in meditation. One stood up and said, “I’ve forgotten my mat.” Stepping on to the waters before him, he walked across to the other side, where their small hut stood in the forest. When he returned, the second monk said, “I just remembered I haven’t dried my washed clothes.” He too, strode calmly across the water to the other bank and returned in a few minutes the same way.

The third monk watched them intently. Figuring that this was a test of his own skills, he loudly declared, “So you think your abilities are superior to mine! Watch me!” and scurried to the edge of the river bank. No sooner did he put his foot in than he fell into deep water. Unfazed, he waded out and tried again. And again and again, to no avail.

After watching this performance in silence, one of his fellow monks asked the other, “Do you suppose we should tell him where the stepping stones are?”

I'm very fond of Zen stories. If you've heard this one before I hope you'll excuse me for telling it again. 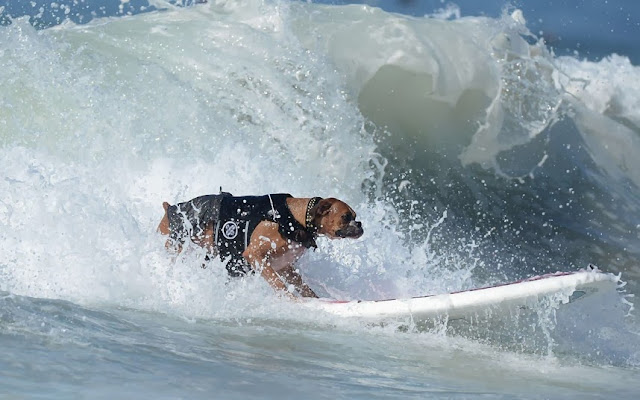 As the days grow colder and the nights grow long, I couldn't resist posting this great picture of a dog surfing the waves at Huntington Beach, California. For the past few years there's been an annual Doggie Surf weekend at the end of September that provides much fun for the dogs and their human companions as well as money for animal rescue charities. Enough from me, though, enjoy the movie and remember warm, sunny days.

My favorite is the one surfing backwards, or is it the sitting poodle, or perhaps the little white dog hanging ten. Silliness is good.
♡
Posted by susan at 5:59 PM 12 comments: 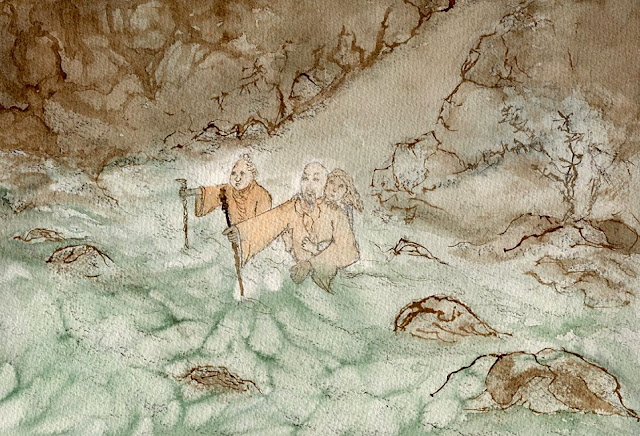 Two traveling monks reached a river where they met a young woman. Wary of the strong current, she asked if they could help her across. One of the monks hesitated, but the other quickly picked her up onto his shoulders, transported her across the water, and put her down on the other bank. She thanked him and departed.

As the monks continued on their way, the one was brooding and preoccupied. Unable to hold his silence, he spoke out. "Brother, our spiritual training teaches us to avoid any contact with women, but you picked that one up on your shoulders and carried her!"

"Brother," the second monk replied, "I set her down on the other side, while you are still carrying her."
Posted by susan at 8:20 PM 21 comments: 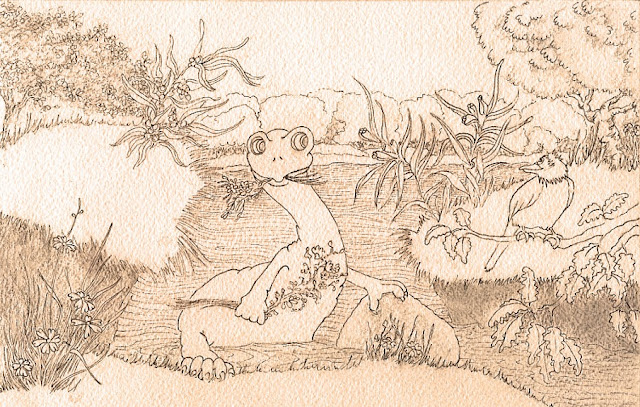 Once, a while ago, so long ago that my Grampa recalls it vaguely, everything was pretty much the same as it is now. Except for a few things.

Some of these things that were different were the turtles. They weren't so different. They still had noses and ate bugs and moved slowly just like now. The only difference really was that they didn't have shells. So they looked something like this, I guess.

And this turtle here, his name is Anthony. He's the turtle this story is about. All the other turtles have stories about themselves, of course, but it would take me five years to tell you even half of them, and thirteen years more to tell you all the endings. Besides that, you should probably go to sleep soon. So I will tell you just about Anthony tonight.

Anthony lived with his brothers and sisters in a place called Turtletown, which is about 27 miles east of Schenectedy. But you won't find Turtletown on any map. Many maps don't even have Schenectedy on them.

Turtletown was a pleasant and beautiful place with many colorful flowers and cool clear ponds. Just as now the turtles passed their moments quite happily. 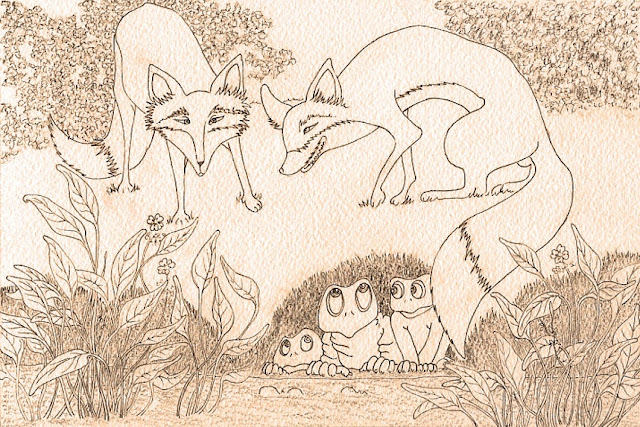 But there seemed to be nothing that could change these things. And not being the type that dwells upon misfortune, Anthony, and all his brothers and sisters, lived in their happy moments - even though they had sore throats and so on sometimes. 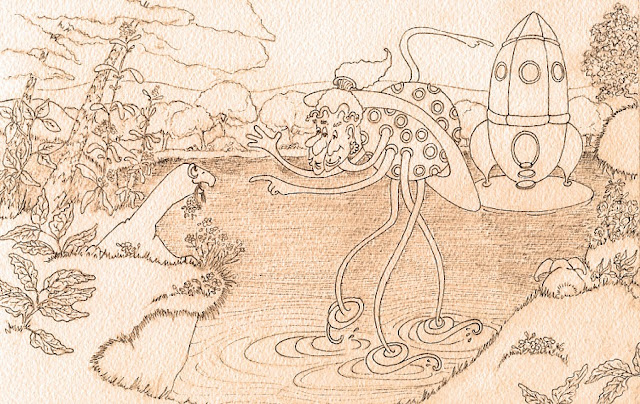 Well now, Anthony was out walking one day, searching up some munchies and humming, and what do you think? Well, it almost goes without saying that suddenly a long, pointed rocket swooped out of the sky and landed very near by. Anthony's little red eyes blinked a few times. He was surprised and said, "Holy Smokes!" He forgot all about hunting for munchies, but did keep on humming. And he walked over to the rocket.

When he got there a big purple man with three eyes, three ears, three noses, three mouths, three arms, and three legs came out from the rocket. He bent down and picked Anthony up. Anthony said, "What's happenin', man?"

The purple man laughed heartily. He laughed so much that Anthony laughed too. When they stopped laughing, the purple man said, "Thripdipple!" They started to laugh again. Then Anthony's new friend took Anthony into the rocket. 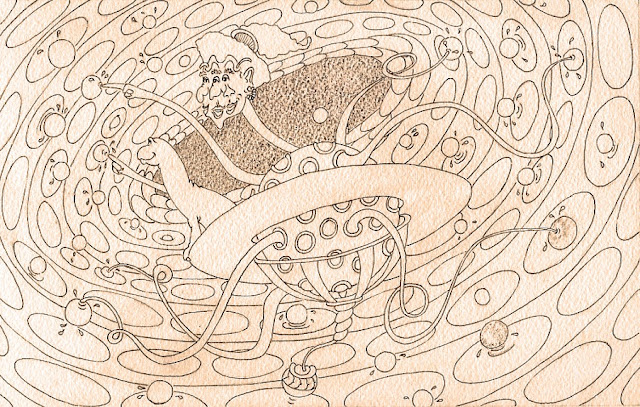 And in no time at all it seemed (and in actuality was) the rocket became still. Anthony knew they had landed. His friend stood up. Anthony was still on his shoulder. They went to the door. 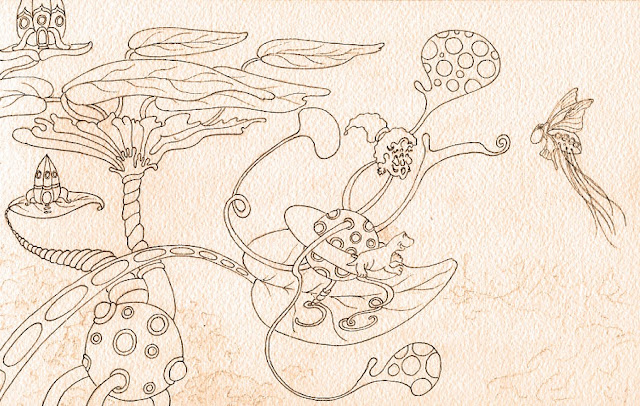 What a sight! Anthony's friend put his hands out and said, Thripdipple!" Anthony began to hum. They walked to the corner. There were other men and women at the corner, and they were standing in a queue. Anthony guessed that it was a bus stop. And as sure as your Aunt Matilda wears tennis shoes in the bathtub, he was right. 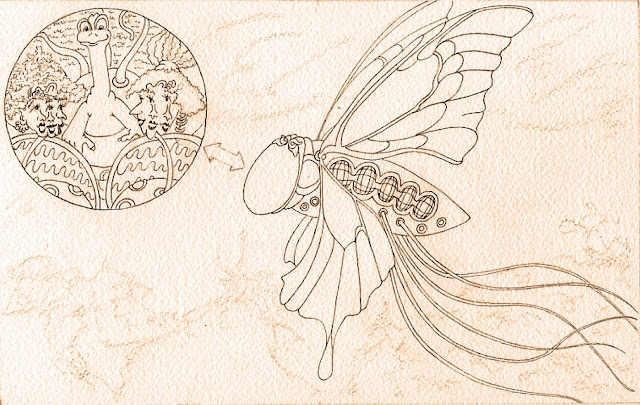 Now they traveled on the bus for some time. Anthony stopped humming and listened to two women who were sitting in front of him. This is what they were saying: 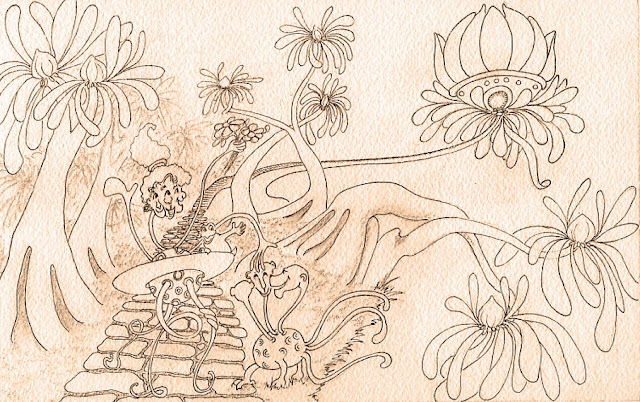 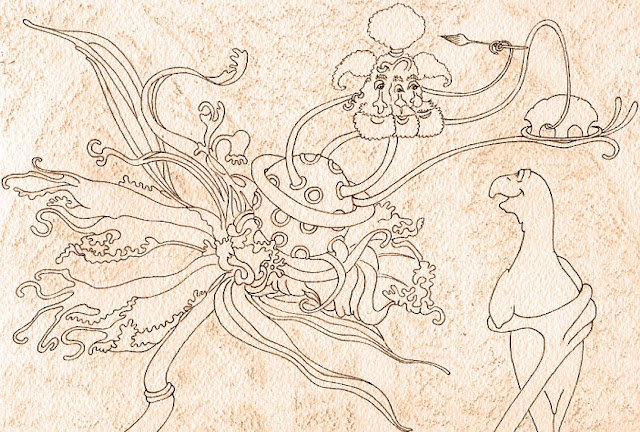 Such a splendid room! A wise looking old man with three fluffy pink beards was sitting on a pillow in a corner. Anthony's friend bowed to the man and said, "Thripdippleness!"

"Many years ago when I was your age, thripdipples didn't have the kind of rockets we have now. We used to have round ones. And children, you know, like to have toys and smaller things to play with. So we thripdipples gave our children small, round rockets, like this one." Thripdippleness reached in one of his ears and pulled something out.

Well, the rest of the story is plain to see. Thripdippleness and Anthony's friend filled up 46 big bags with all the small round rockets the thripdipple children didn't play with any more. They put the bags in the long pointed rocket then Anthony and his friend went in. Anthony's friend sat in his chair. This time he only pushed one-half of one button. They both said, "Thrip!" Then the rocket shook and roared through the cosmos. 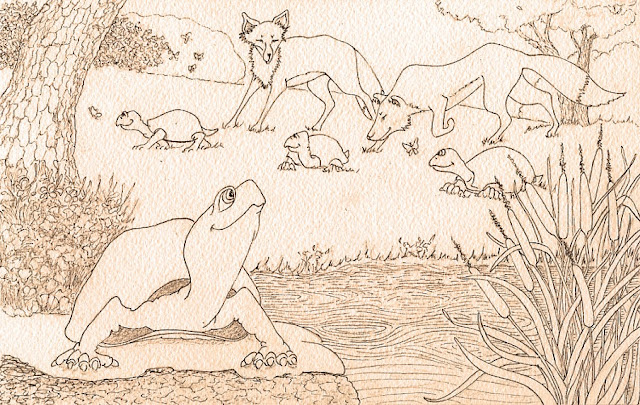 When they arrived back in Turtletown, Anthony called all his brothers and sisters. Then Anthony's friend put each and every one inside a small round rocket.

And now, even if a hungry fox or two comes by, and even if it rains and becomes cold all at once, the turtle folk don't mind. They are safe and sound inside their thripdipples.

This story was written by he who is locally known as numb about thirty-five years ago for two dear children who (rightfully so) loved nothing more than any excuse to laugh. Here is a picture of them: 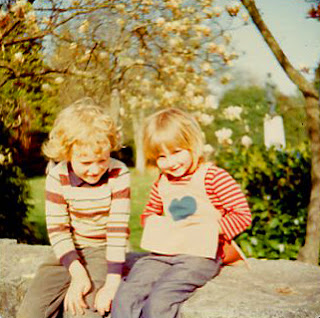