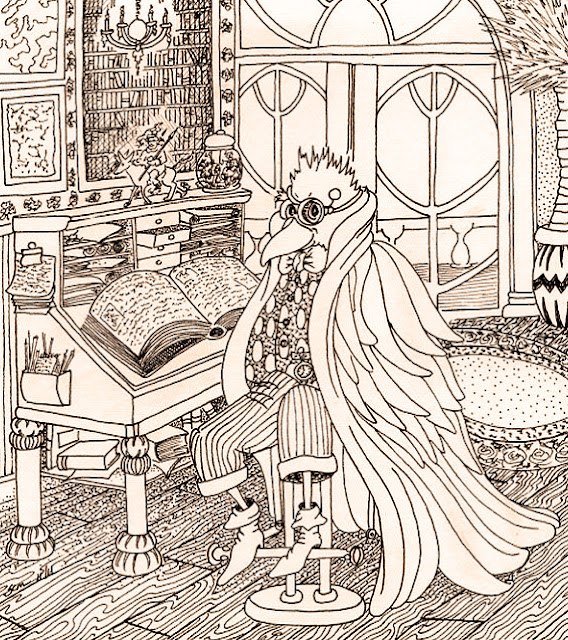 I thought you might enjoy seeing a picture of Crow relaxing in his sanctum earlier today when I carried in our tea and a package of dark chocolate digestive biscuits to share. Such small luxuries can make grand occasions of life and we enjoyed some conversation about the world as it is and as it used to be. It seems to both of us that although the past is gone and much about it is best forgotten there are still many things to learn and carry into the future.

Crow likes to surround himself with some of the artifacts he's collected over the course of a very long life. Naturally, some of them he left in place because even though they were originally dedicated to him and his friends moving them would have been impossible as well as rude.

You'll probably laugh as I did when he told me that Genghis Khan and Attila the Hun weren't such bad guys to hang around with once you got to know them. He made a good point when he mentioned that at least they did their massacring, raping and pillaging right up front rather than being sneaky and dishonest about their activities and real motives.

Some of his happiest memories are of the times he spent in company with William Morris who was worried about English society for similar reasons we worry about our own culture now. He said that, in a "true society", where neither luxuries nor cheap trash were made, machinery could be improved and used to reduce the hours of labour.  Rather than the clamor made by futurists for faster machines, progress, capitalism, competition and the creation of wealth Morris thought the function of the machine should be to free workers from drudgery rather than displace them. His aim was to create as much beauty as he and his associates could for as many people as they could. It's strange to think that in our own times there's no designer, politician or industrialist who would dare to make concrete proposals for improving the lives of ordinary people.

After a happy autumn spent watching and participating in OWS events we were saddened about the feeding frenzy we heard about this past Black Friday. People get confused and desperate, all the more so when they're being told the only hope for the economy to rise, and perhaps for their jobs to return, is that they max out their credit cards. Crow mentioned it wasn't unlike the peasants rushing to the bakeries to buy cake just before the French Revolution. I have a feeling Occupy will return with the spring flowers..

It wouldn't be a surprise to any of us to see a world economy based on the false premise of infinite supplies of fossil fuel grind to a serious slowdown in the near future and there's no doubt there'll be trouble. It's more than likely we'll see a near future where 2012 is just another date on the calendar, the Singularity is forgotten as people figure out how to grow vegetables on their balconies and keep chickens in the extra bathroom, and the Rapture leaves everyone behind. Then again, as Crow said today there's always the possibility that in the longterm a larger world will be more comfortable for everyone.


dream(drēm)n. from Mary Lai on Vimeo.

It's unlikely I'll ever make a video myself but I'm very impressed with the wonderful effects that can be made to happen using only the simplest of materials - and a good knowledge of computer arts. I found this one very recently and rather than leave it where it was I thought I'd post it here for you to see.

This is a story about a blackbird who lives quite a miserable life whether awake or asleep. How he deals with his situation is what the movie is about.

it's that time again 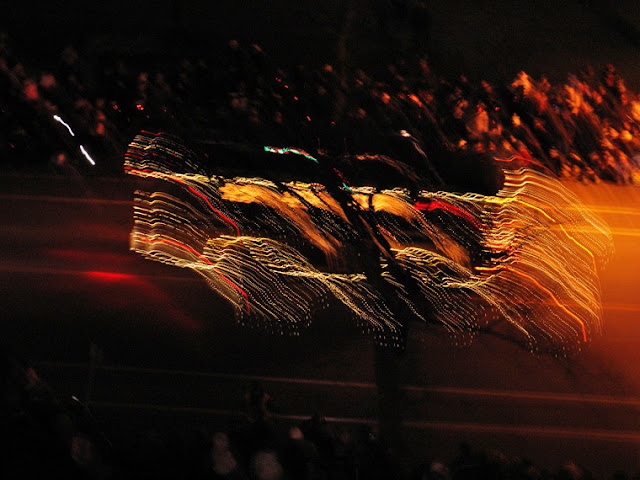 Between bites of dinner this evening I ventured out onto our cold 7th floor balcony to snap a few pictures of the Festival of Lights, Halifax's annual holiday parade. Even though my camera complained about being confused, the pictures it captured were considerably more exciting than the event itself. It's the kind of parade that nobody would go out to see if it happened in daylight. Trucks, buses, the Harbor Hopper, and even the Purolator delivery van covered in Christmas lights drove by in slow procession, each and every one playing 1950's holiday music at the loudest possible volumes their freshly installed sound systems would allow. 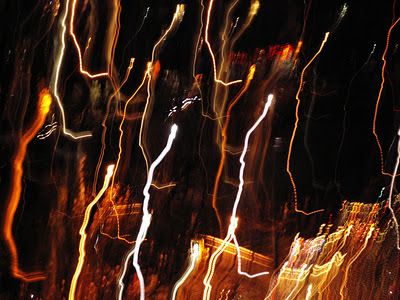 If you can imagine Brenda Lee singing 'Rockin Around the Christmas Tree' bumper to bumper with Gene Autry's version of 'Frosty the Snowman' closely followed by Chubby Checker doing 'The Jingle Bell Rock' I'm sure you'll get the gist. I can hardly bear to mention listening to the combination of Burl Ives 'Holly Jolly Christmas' and Bing's 'White Christmas' when a traffic jam stranded them out front for ten minutes. Do you ever wonder why it is that popular Christmas music seems frozen in an earlier time? 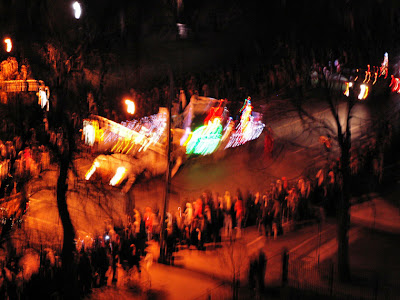 Anyway, the pictures are kind of neat in a weird way. Between my shivering and the moving vehicles it actually looks like a high tech art event. Who knows? Maybe they'll convince tons of tourists to stop by next late November. But probably not you.

lucky to be water born 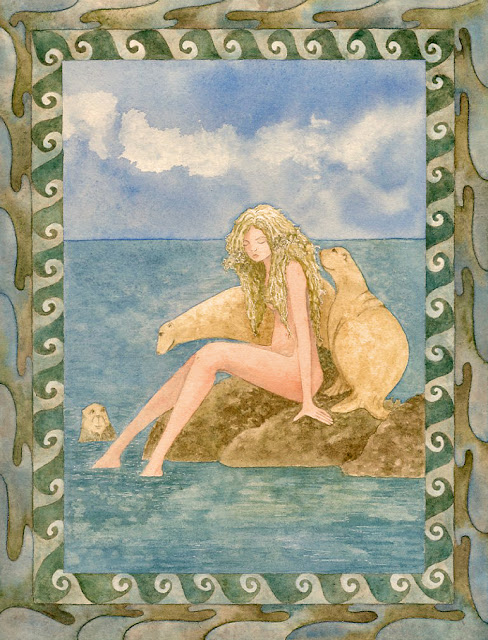 During the three hours this morning it took me to wake, drink coffee, eat breakfast, read the news, shower and get ready for a walk, humanity had extracted another 378 million barrels of crude oil, 56 million tons of coal, and 36 billion cubic feet of natural gas out of the planet’s steadily depleting reserves. I'll admit right up front the way I spent those three hours contributed to the depletion. Considering the way things are set up in the western world it's very difficult to know how to live in such a way as to not stress the environment. I hate going to big box stores or shopping malls but the fact is I've been engineered to negotiate those spaces whereas, being left to myself in the woods, I couldn't tell one mushroom from another and neither could I find my way out of a good sized park without a map and the help of a kind hearted park ranger. It's pitiful.

It was only a little more than a century ago people pretty much lived in harmony with nature's ability to resupply our natural resources; essentially, work was done by human labor in concert with animals when extra strength was required and power for grinding grain was done by water and wind mills. I wouldn't last a month in that world. Nevertheless, what did happen was the discovery of the planet's non-renewable resources and the serious mistake that was made was to treat them like they were infinite.

Even if I had the inclination I couldn't afford to buy land, tools, seeds, or any of the other multitude of things required to start a farm. If you're interested in the adventures of someone who actually did make a serious try at it please go over to Gfid's blog North of Sanity where she's been describing a time more than 30 years ago when Canada still had some free land on offer. Her experience provides a very entertaining story about what most of us city bred types could hardly imagine doing.

What I am good for is doing all the things we're able to do with the support of modern conveniences. I can cook, clean, read, write, drive, draw, and even ride a bicycle. What I can't do is figure out how to save the world for future generations to enjoy, but if anything is ever going to change for the better, I think alienation is a good place to start. There's a lot worth being alienated from. You don't have to be ashamed of feeling alienated by a world filled with evil, stupidity,  greed,  and injustice. We've all fallen into the world as it is but if our children's children are to be free,  maybe imagining a different world - a world in which we would feel at home - is a good place to start. 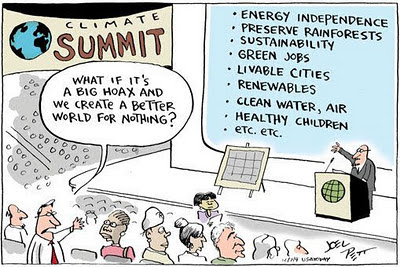 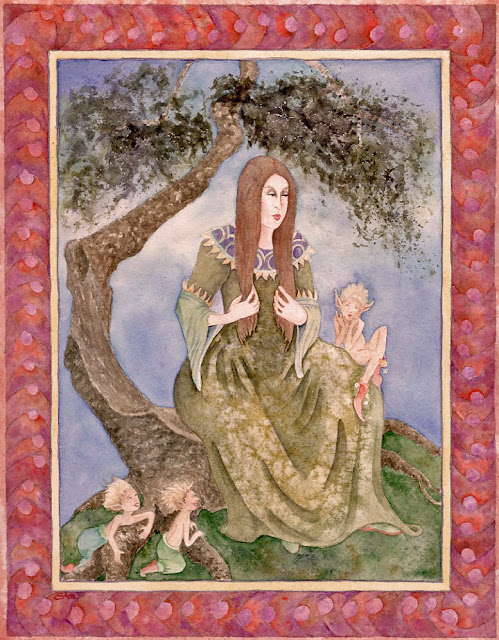 Before I say another thing I want to tell you just how grateful I have been for your wonderful and heartfelt reactions to my sad announcement that my friend had died. There are some people we encounter who actually define our lives by their presence in the world. Inger was and is one of those very rare individuals.

I finished this painting a couple of weeks ago and had been planning to show it to you in a new post at the time. Now it's the first and only thing I have available to show you at all so that's what I'll do. It's far from one of my best efforts but, even though the message isn't clear (even to me), it at least changed in mood from the drawing done in late summer when I was thinking about reflections. This one is more about the distractions that appear just as we're on the cusp of some momentous understanding. It seems to me that our lives are often more about the little things that distract us while we imagine we're making our way to larger goals.

There have been many interesting developments these past weeks in the world at large and I'm sure Crow will have a few things to say when he returns. Meanwhile, I'll gather my thoughts and my pencils and will make an effort to be verbal again.

Much love to you all.