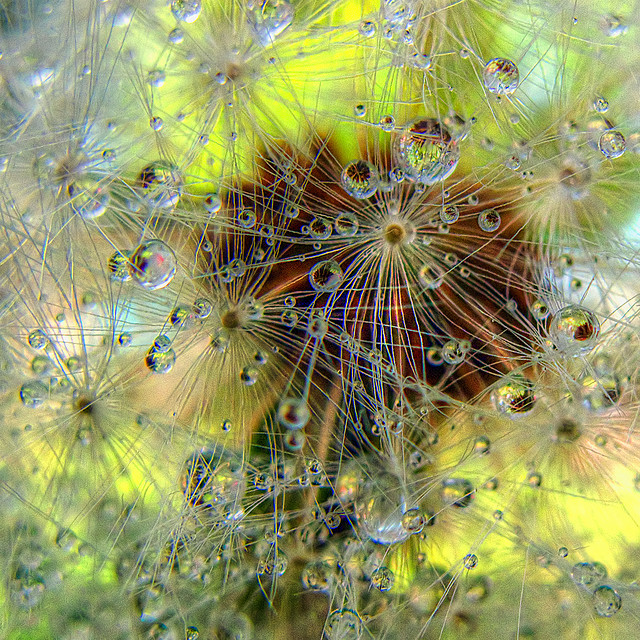 No, I didn't take this picture but it was such an amazing close-up of a very common summer flower I just couldn't resist sharing it. Did you know almost all dandelions are clones? They're most certainly the bane of gardeners and the delight of children. Dandelions have been famous among children for a very long time. What little girl has never used a dandelion 'clock' to tell the time? What little boy has never kicked the head of one (or a dozen) to watch the seeds fly away? If you know of any who haven't then those children should be encouraged to get out of the house more.

Yes, here we are with high summer blooming all around us and the two major North American summer holidays on the way. Tomorrow is Canada Day and next week will be the Fourth of July. Here's a celebratory video sent by a friend that I'll post in honor of both:

Crow will be home for the festivities and he's bringing another dear friend with him. The more the merrier when it's Fireworks time.

Good weekend to all.. and I hope it's not too hot where you are.
♡

ps: We've been here for nearly two years and have never once heard anyone say 'you hoser'. I wonder if it's become unfashionable? 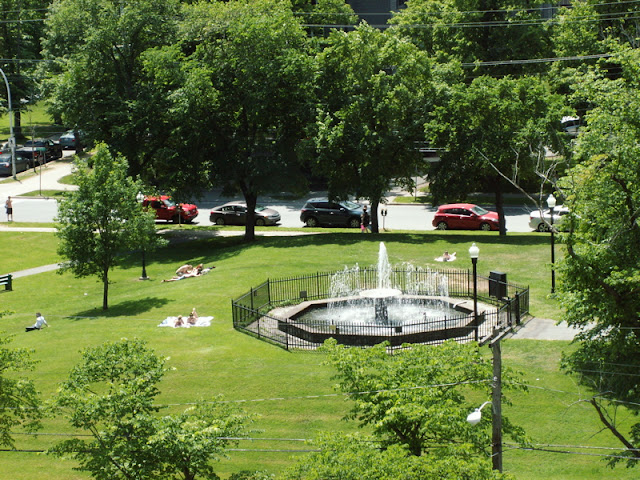 Believe it not there are a few intrepid business owners here who post signs in their window displays that actually use the word Halifornia to mean Halifax. Now I wouldn't have you believe anything is particularly bad about this nice little city that's generally very well cared for (a 13% sales tax rate and high property taxes do wonders for the various municipal services) but California it is definitely not. I spent more than 17 years living on the west coast of the US and had enough chances to see that fabled state to know this city is nothing like that place. Look wherever you like and you won't find a movie studio, a Hollywood starlet, a Golden Gate Bridge, or a Disneyland. No grape vines either. Nevertheless, when the summer sun shines it's a pretty enough place as you can see from the picture above I took one afternoon last week (zoomed a bit); the very next morning we awoke to mist so thick I couldn't see the balcony rail from three feet away. 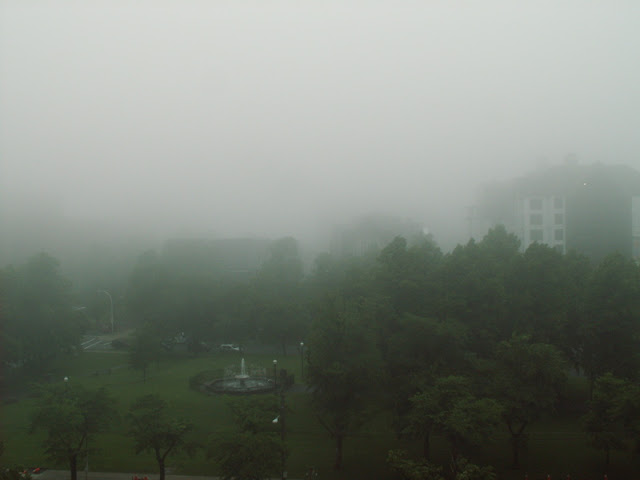 Here's another one taken from the same spot this morning and what we have here is a genuine Atlantic fog and not the smog that often obscures LA. California is a lovely state that has its share of man made problems while Halifax (and Nova Scotia in general) simply don't have the kind of climate and landscape to attract 36.5 million people. In fact the entire population of Canada at 34 million is noticeably less than that figure. Perhaps those store owners should just show a bit more honesty in advertising and change their signs to say Halifog. Then again, that might not encourage tourism.

I came across an interesting story on the BBC this morning about the world's first multinational corporation and its monopolization of the spice trade:

Just as corporations today seek to monopolise plant genes in the developing world, the Netherlands United East India Company (Voc) set about seizing total control of spice production. In 1652, after displacing the Portuguese and Spanish, the Dutch introduced a policy known as extirpatie: extirpation. All clove trees not controlled by the Voc were uprooted and burned. Anyone caught growing, stealing or possessing clove plants without authorisation faced the death penalty.
On the Banda Islands, to the south - the world's only source of nutmeg - the Dutch used Japanese mercenaries to slaughter almost the entire male population. Like Opec today (and Monsanto etc.?), the Voc also limited supply to keep prices high. Only 800 -1,000 tonnes of cloves were exported per year. The rest of the harvest was burned or dumped in the sea. 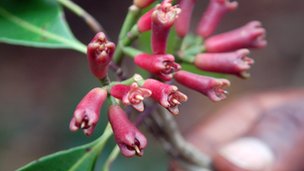 Somehow, little Afo managed to slip through the net. A rogue clove. A guerrilla plant waging a secret war of resistance. Afo would eventually bring down the Dutch monopoly on cloves. In 1770, a Frenchman, appropriately named Poivre, stole some of Afo's seedlings. This Monsieur Pepper took them to France, then the Seychelles Islands and, eventually, Zanzibar, which is today the world's largest producer of cloves. A clove tree planted from the original seeds still stands today half way up a volcano on Zanzibar where it grows as a symbol of the ultimate folly of empire - and the stubborn refusal of nature to be controlled. 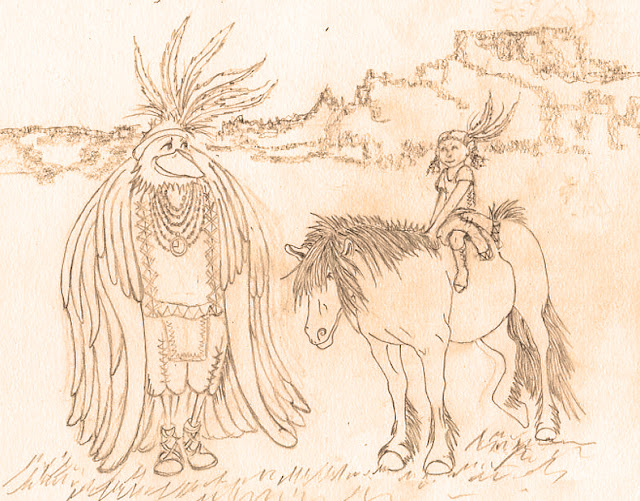 Since I have nothing much else to share with you this evening I thought you might enjoy reading a postcard from Crow that came in the mail today:

I know you're not likely to credit this but according to a most remarkable rumor I heard recently, the states of N. Carolina, Texas, and Virginia have passed laws outlawing (virtually commanding) the sea level not to rise. Naturally, that made me wonder if the sea level does rise in those states will the sea be arrested? Will it be read its Miranda rights and be locked up in the local hoosegow prior to a trial? Will use of a mop be considered inhumane treatment of a prisoner? Who will form the jury of its peers? It can't very well be made up of the major US rivers since even the most enthusiastic members of the Tea Party must understand that calling to jury duty the Columbia, the Colorado, the Pecos, the Mississippi, the Chattahoochee (love that name) and their ilk would be a serious conflict of interest. Perhaps they'll call on some of my ocean dwelling friends but after the Gulf of Mexico oil disaster most of them refuse to go near American coastal waters these days.

In any case it should be quite entertaining when the M$M spends hours, days, weeks, and possibly, months covering that trial. I may need you to send me an extra case of Remy as I anticipate a rather more powerful than usual urge for drink. Come to think of it perhaps you could send some leeches too as I think I might require a good bleeding. It appears I may have a toad or a small dwarf living inside me that is upsetting my bodily humours for surely that rumor couldn't be true.

Now I'll have to see about transforming this charming picture into something a bit more colorful to add to his collection. 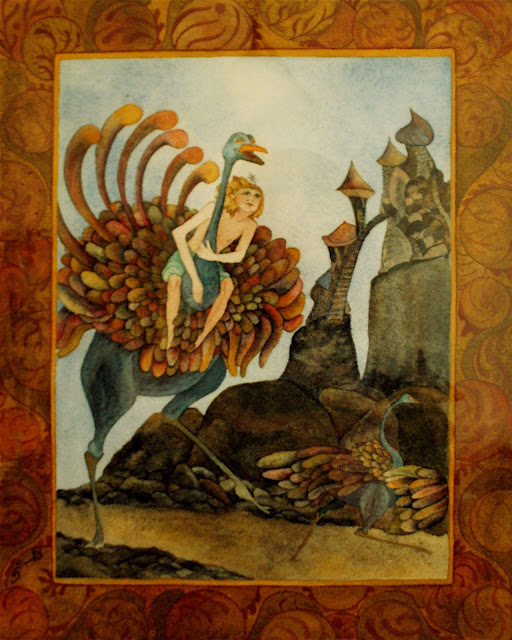 Rather than drawing or painting a new picture, I decided to post an old one (hoping you'll excuse me) partly because I haven't had time to draw a new one that's pertinent, and second, because in the not too distant future I'll get to see this one hanging on a wall somewhere in our new place. Yes! We finally found a new apartment, so the stuff that's stayed packed away in traveling cartons while we waited out this*, that^, and the other thing# will be out on display again. I don't want you to think we've been living without furniture or the other necessities of life like books and movies, but we do have far more cardboard boxes than are typical.

* this - It took a lot longer than we ever expected to get an authorization for numb to be accepted as a resident in Canada. More and more, there are things you're allowed to do that are much more difficult to accomplish in practice.

^ that - Since we hadn't heard from Immigration by last June we had to stay here for another year. Believe me, it's really best not to change your address while waiting for a government agency to come to a decision.

# the other thing - It's a law in NS you must give the landlord three months notice. Fine. Many students leave in late spring. Good. More apartments are available in the summer here than there are in the fall. Great. All we had to do was find one.

That's what we've spent the past couple of months doing. Yes, we're picky but more on the side of having something nice to look at out the windows rather than wanting a dishwasher or our own personal washer and dryer. Even though a car is a requirement sometimes, it's also undeniable it's preferable to be able to walk where you need or want to go. So we signed the lease today and will be moving at summer's end to a new apartment that's almost as spacious as this one with fewer yet bigger rooms. Instead of living on the 7th floor of a 23 story building we'll be on the 3rd floor of a 7 story one so I won't get dizzy while standing on the balcony. Plus, it's only two thirds of our current rent.  Now we'll be able to plan for some summer fun. It also means I'll have more time to focus on drawing and writing that story I keep boring you about.

Meanwhile, here's another very cool (and short) video from Vimeo:


not over from Toru Hayai on Vimeo. 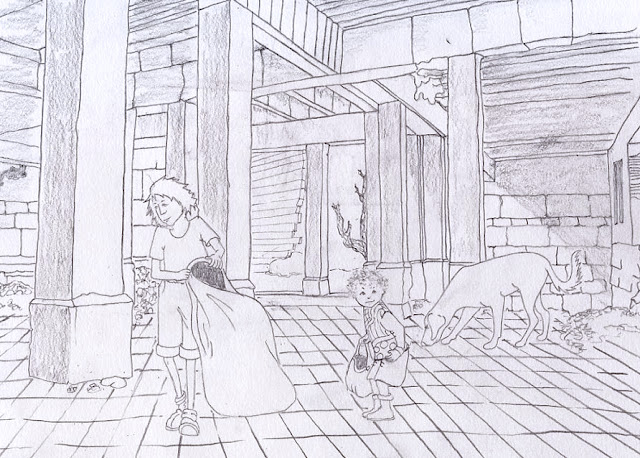 I've been continuing to draw pictures for a story that seems less likely to get written with each passing day.  Back in March it seemed like it would be a fairly simple process to write then illustrate a post apocalyptic tale about a young girl and her dog who go in search of something that will save the world. Now I'm not so sure. Well, actually I am sure and it's not just that I'm not a confident writer of fiction.

The good news is that I have a number of ideas for paintings sketched out that I'll be able to work on in the future. Maybe each one of them will tell its own story.

Is it just me or has the Blogosphere gone generally quiet these past months? Have more of us moved to twitter or is there a really good book everyone is reading that I haven't heard about?

Meanwhile, if you need some immediate entertainment here's something that's fun: 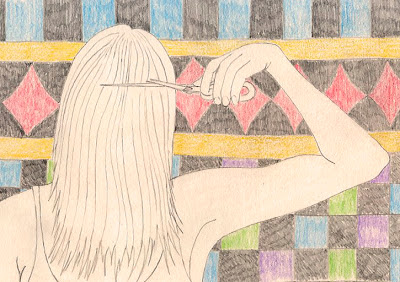 Along with running with them another thing we're not supposed to do with scissors  is cut our own hair. I'd been meaning to find somebody new to cut mine for a while but so far just hadn't got around to it. I hate going to the hairdresser almost (but not quite) as much as going to the dentist. Sitting still in the chair staring at myself in a large mirror for half an hour or more while someone fidgets around with scissors, combs, clips, sprays, and blow dryers is already not my favorite thing. Then there's having to listen to the usually inane conversations going on about hair, make-up, fashion.. or worse. Once finished they charge the approximate value of an arm and a leg and tell you to come back in six weeks.

Nearly two years had gone by since my last appointment. A few days ago I got fed up looking at the split ends of my now very long hair so I picked up a pair of large sewing scissors and a hair tie and ran to the bathroom. First, I lined the counter and sink with paper towels then brushed all my hair forward and made a ponytail at the top of my forehead (I didn't draw it that way). Then I measured the hair to the bottom of my chin and cut. Next, using a smaller pair of scissors, I trimmed at an angle into the flat end to soften the look. Ten minutes of snipping later I ended up with a look not too much different from the girl I've been sketching:

Have you ever cut your own hair?