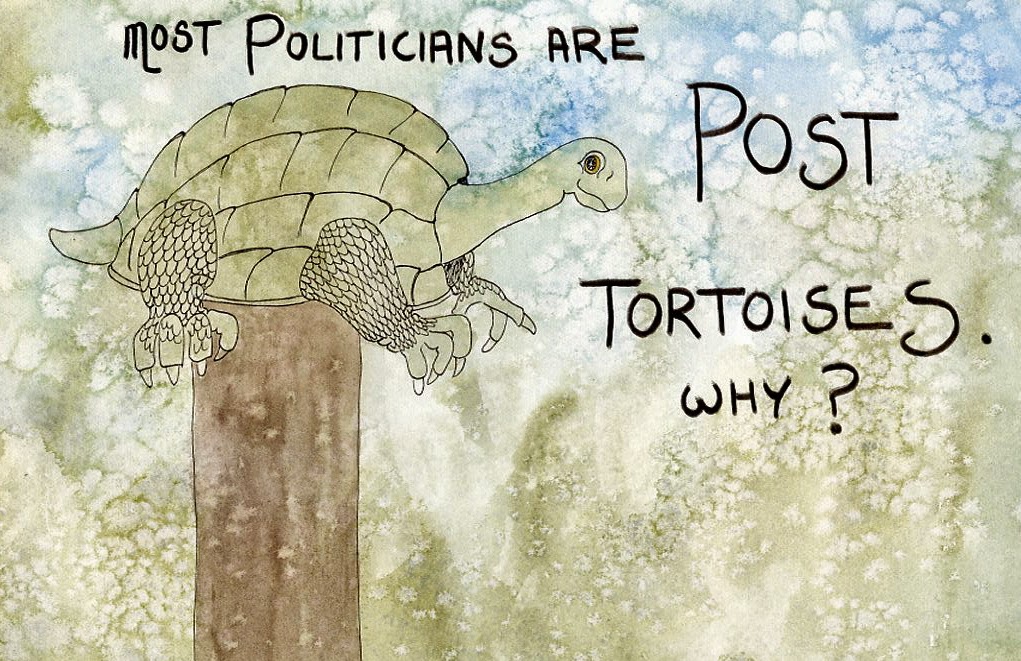 When you're driving down a country road and you come across a fence post with a tortoise balanced on top, that's a post tortoise.

Are you still puzzled?

Okay, here are the reasons:

You know he didn't get up there by himself.
He doesn't belong up there.
He doesn't know what to do while he's up there.
He's elevated beyond his ability to function,
and you have to wonder what kind of idiot
put him up there to begin with.

Happy Almost March.
May you have a spring in your step and a song
in your heart as winter loses its grip
(hopefully, before I lose mine).
Posted by susan at 7:50 PM 18 comments: 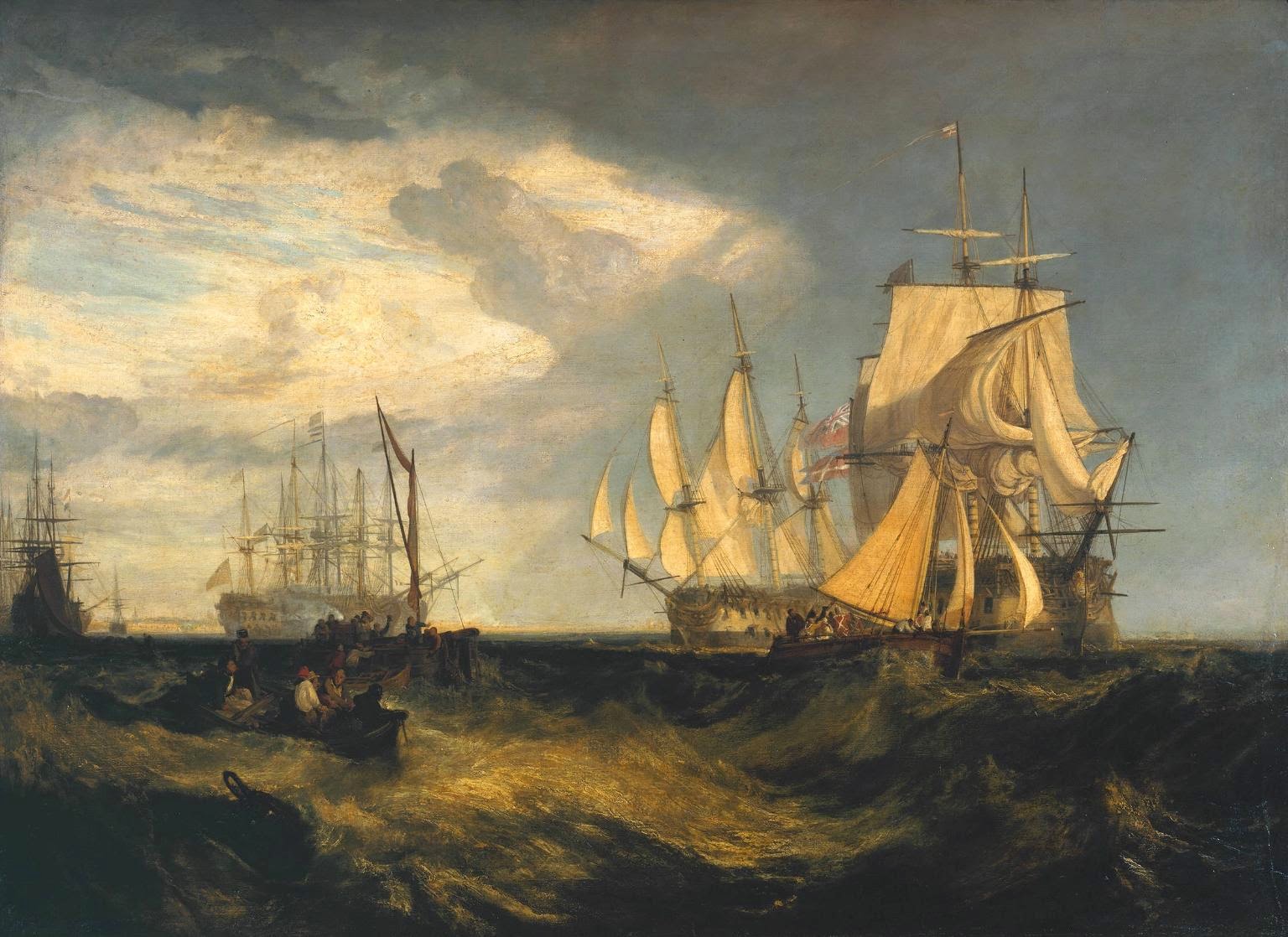 What is a reasonably sensible person to do when a great armada of snowstorms parade through one's city making long outdoor excursions difficult, if not intolerably unpleasant? Sensible or not, this particular person has ensconced herself with the twenty and one half novels about Captain Jack Aubrey, RN and his close friend Dr. Stephen Maturin that take place during the Napoleonic Wars.

Aubrey is a career naval officer much respected for his talents as a tactician and leader at sea but somewhat prone to misadventure on land. Maturin is a talented physician and accompanies Aubrey on many of his voyages as ship's surgeon. In contrast to Aubrey, he is classically educated and a respected naturalist who also serves, unbeknownst to his comrades, as a volunteer agent for Britain's naval intelligence service.

If Patrick O'Brian's tales were nothing more than well-told, highly accurate accounts of life at sea and historical naval actions of a certain time, that alone might be enough to recommend them. But his novels go much further by exploring the emotional and situational aspects of friendship, romance, family, war, politics, and career in a way that's both compelling and relevant. O'Brian's main characters of both sexes, while undeniably heroic in their own ways, always remain essentially human. Their particular foibles and frailties, from Aubrey's ingenuous trust of land-borne sharks of all types to Maturin's hopeless addiction to opium, form an essential part of the novels.

Here's a hint - or it may be a reminder if you've read them yourself:

“The weather had freshened almost to coldness, for the wind was coming more easterly, from the chilly currents between Tristan and the Cape; the sloth was amazed by the change; it shunned the deck and spent its time below. Jack was in his cabin, pricking the chart with less satisfaction than he could have wished: progress, slow, serious trouble with the mainmast-- unaccountable headwinds by night-- and sipping a glass of grog; Stephen was in the mizentop, teaching Bonden to write and scanning the sea for his first albatross. The sloth sneezed, and looking up, Jack caught its gaze fixed upon him; its inverted face had an expression of anxiety and concern. 'Try a piece of this, old cock,' he said, dipping his cake in the grog and proffering the sop. 'It might put a little heart into you.' The sloth sighed, closed its eyes, but gently absorbed the piece, and sighed again.

Some minutes later he felt a touch upon his knee: the sloth had silently climbed down and it was standing there, its beady eyes looking up into his face, bright with expectation. More cake, more grog: growing confidence and esteem. After this, as soon as the drum had beat the retreat, the sloth would meet him, hurrying toward the door on its uneven legs: it was given its own bowl, and it would grip it with its claws, lowering its round face into it and pursing its lips to drink (its tongue was too short to lap). Sometimes it went to sleep in this position, bowed over the emptiness.

'In this bucket,' said Stephen, walking into the cabin, 'in this small half-bucket, now, I have the population of Dublin, London, and Paris combined: these animalculae-- what is the matter with the sloth?' It was curled on Jack's knee, breathing heavily: its bowl and Jack's glass stood empty on the table. Stephen picked it up, peered into its affable bleary face, shook it, and hung it upon its rope. It seized hold with one fore and one hind foot, letting the others dangle limp, and went to sleep.

Stephen looked sharply round, saw the decanter, smelt to the sloth, and cried, 'Jack, you have debauched my sloth.”

I have nothing more to say about our winter weather than this:

another Spring with Crow I wandered lonely as a cloud
That floats on high o'er vales and hills,
When all at once I saw a crowd,
A host, of golden daffodils;
Beside the lake, beneath the trees,
Fluttering and dancing in the breeze.

Continuous as the stars that shine
And twinkle on the milky way,
They stretched in never-ending line
Along the margin of a bay:
Ten thousand saw I at a glance,
Tossing their heads in sprightly dance.

The waves beside them danced, but they
Out-did the sparkling leaves in glee;
A poet could not be but gay,
In such a jocund company!
I gazed—and gazed—but little thought
What wealth the show to me had brought:

For oft, when on my couch I lie
In vacant or in pensive mood,
They flash upon that inward eye
Which is the bliss of solitude;
And then my heart with pleasure fills,
And dances with the daffodils.

As you may remember, Crow has flown to warmer climes away from our frozen northern winter. While ensconced in his library a few days ago I came across this illustration drawn by a now anonymous artist made during the early years of the 19th century when Crow accompanied William Wordsworth on his walks around the Lake District. As he's mentioned often, times were only simpler then because humans hadn't yet mastered technologies they still haven't learned to use wisely. Perhaps that was never possible. Our current conditions, both good and bad, most definitely arose with the discovery of the energy inherent in fossil fuels. Now we look back to see those centuries as innocent.

I'm looking forward to Spring and Crow's return. Once its safe to walk out on our sidewalks again I must replenish his brandy supply. This hasn't been a month to give up drinking.
♡

ps: I colored this and drew Crow - the rest is from an old woodblock print.

pps: Crow wrote to say the one thing that makes him and his friends laugh harder than anything else is when people say they worry the sun will become a red giant in 5 billion years.

a gritty letter from Crow 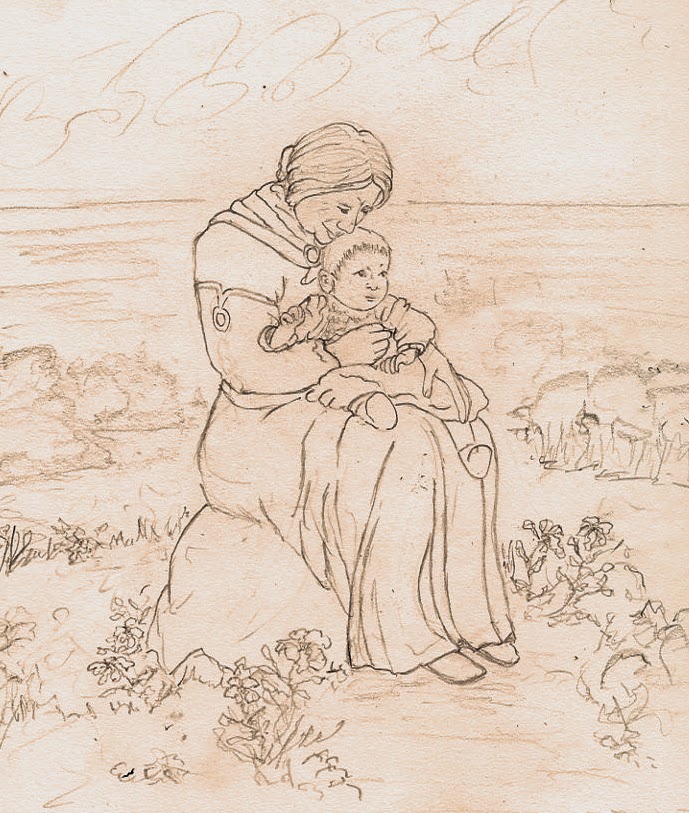 Crow was supposed to be posing for a beach scene but what with the cold and snowy weather we've been having lately, he decided he was more interested in Copacabana rather than the one at our local park. I can't say I blame him. In the meantime, I drew this one instead that, hopefully, in a week or so, may become a painting.

On his way to Brazil, Crow made a few stopovers and sent a letter (airmail, of course):

When people think of beaches the first thing that comes to mind is being able to place one's beach umbrella, blanket, and picnic basket on a broad sandy surface. While this is still the case in many parts of the world it's no longer true everywhere. Sand has by now become the most widely consumed natural resource on the planet after fresh water (UN 2014 study). The annual world consumption of sand is estimated to be 15 billion tons, with a respective trade volume of 70 billion dollars.

Most of your houses, skyscrapers and bridges are made with ferro-concrete which is two-thirds sand (plus cement, water and gravel). 200 tons of sand are needed to build a medium-sized house, 1km of highway requires 30k tons of sand. Especially in Asia and the Arab states the hunger of the construction industry is ever-growing - cement demand by China has increased exponentially by 437.5% in 20 years, while use in the rest of the world increased by 59.8%.

Sand mafias control large parts of the building industry through bribery and also don't hesitate to apply more brutal methods like murdering activists. Not surprisingly, illegal business ties extend to the highest levels of police and government. Illegal sand mining activities are particularly threatening to the water supplies of local communities since river sand is a natural aquifer and its depletion also affects recharging of groundwater. 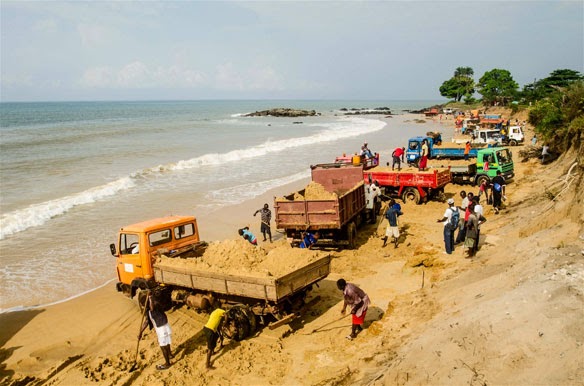 The depletion of sand sources also leads to bizarre scenes in other parts of the world: in Morocco and India, groups know as 'sand-mafia', turn up at beaches with hundreds of people and take away entire beaches - the sand is then used to build huge hotel complexes for tourists who come to Morocco to visit (what else?) these same beaches.

Sand from deserts can't be used for most purposes, as wind erosion over time forms round grains that do not bind well. For most industrial uses, edged sand grains with a rough surface are needed. Desert sands, however, are usually fine grained and of low shear strength - it's not even suitable for the creation of artificial islands. Dubai, for example, used up all its satisfactory marine sand supplies for an artificial set of sand islands and, after these were exhausted, now has to import sand from Australia for continuing its building madness.

Most of the sand is now being extracted from the ocean floor by thousands of large boats sucking up huge quantities of the stuff from the ocean floor in coastal areas. The potential for damage to marine life I'll leave to your imagination (I know you have a good one). In some extreme cases, the mining of marine aggregates has changed international boundaries, ie, the disappearance of entire islands in Indonesia - since 2005 at least 24 small islands have disappeared as a result of erosion caused by illegal sand mining. Most of this sand is going to Singapore, which has expanded its surface area by 22% since the 1960s.

As I saw on my way south, even Florida has to resupply its famous beaches with sand because of the losses caused by offshore sand dredging. Are you surprised?

My condor friends are making ready for their flight back to the Andes. While we sojourn together over the lofty peaks my thoughts will often turn to you and my other human friends who show more perception than others of your species.

Fond regards and salutations to all,
Crow

ps: I expect to find my fruitcake and brandy stocks replenished on my return.

Who would have guessed? 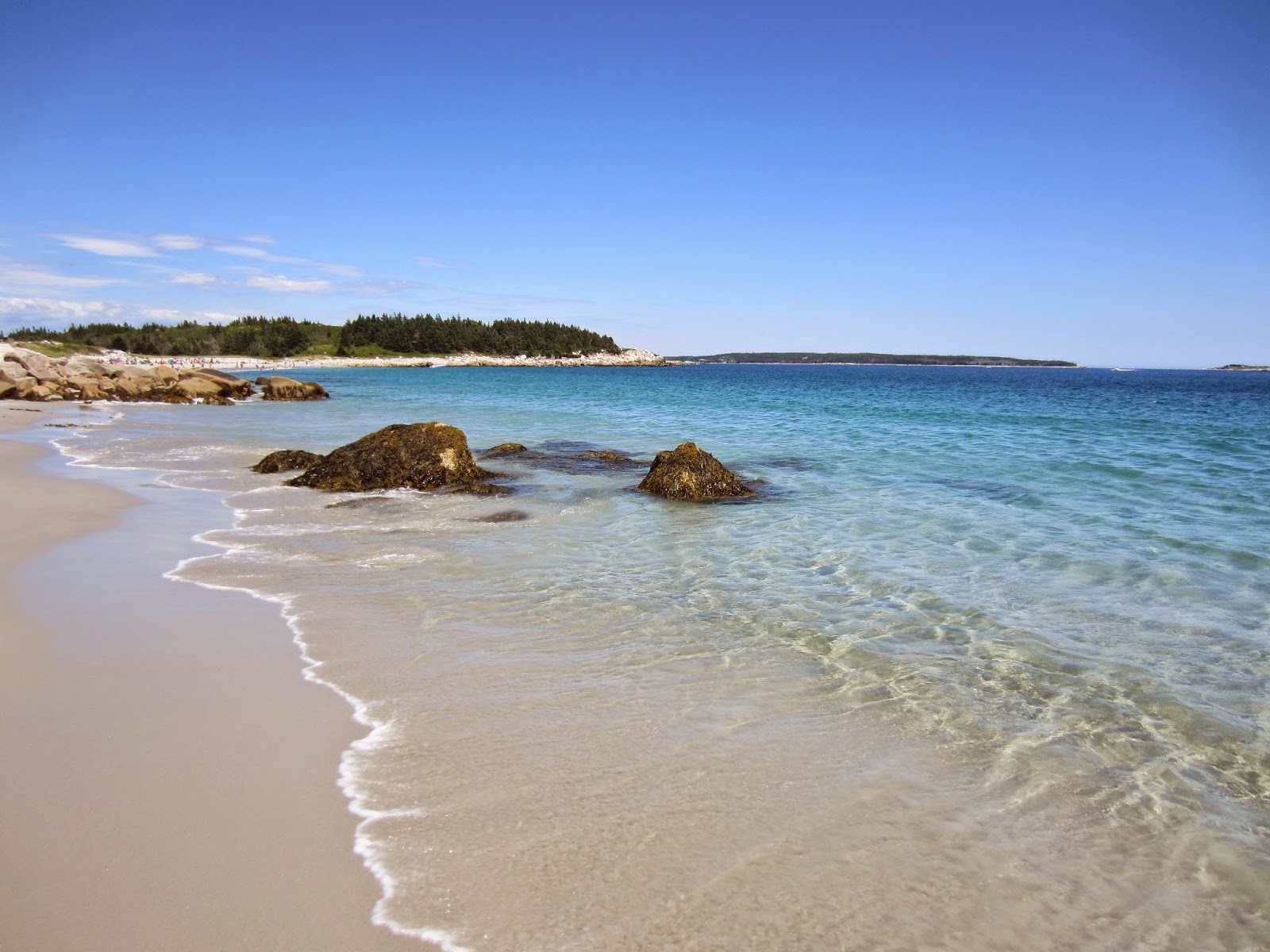 Now I'm hoping Crystal Crescent Beach is still there come summertime.
♡
with thanks to spiegal
Posted by susan at 9:32 AM 13 comments: