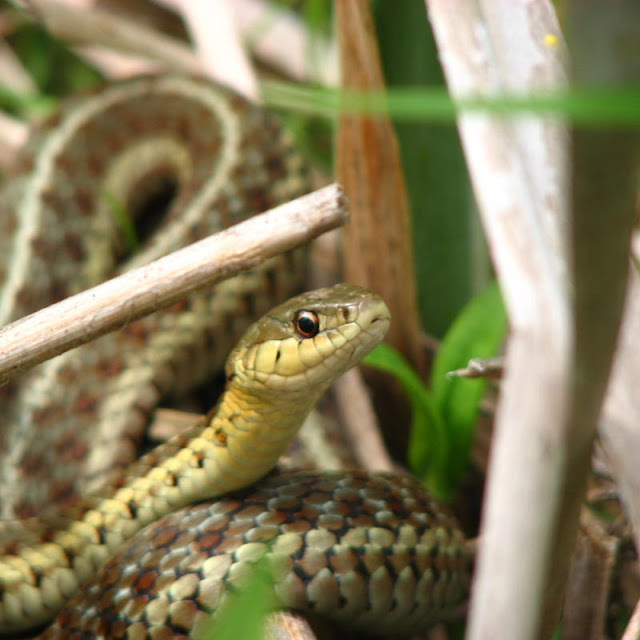 A couple of days ago when walking along one of the more hidden paths in Point Pleasant Park we found a little guy who looked something like this. Actually, he looked a lot like this. Isn't he beautiful? Definitely a garter snake, but a smallish one, probably only very recently born, he was in a wooded area where  moss, granite outcrops, surface roots and pine needles were lit by dappled sunlight. As I walked between two closely spaced trees I could easily have stepped on him if it weren't that his surprised stare stopped me in my tracks. Yes, he was looking at me with what appeared to be a shocked expression but it may be they always look shocked - at least until they react. Neither of us had seen a snake in the park before so we knelt down and all three of us looked each other over. After a few minutes he gave a snakely shrug and slithered sedately over a root and into a hollow at the base of the tree. We watched him curl into the space and then continued our walk. Next up was the frog chorus among the lily pads of the old quarry pond. You'd never guess a simple walk could be so entertaining, would you?

While I hate snagging internet pictures the problem now is I seem to be in the midst of an unexpected, and entirely unplanned, drawing and painting hiatus this summer. Okay, I could have drawn a snake - it's not like that would be very complicated, is it? Anyhow, I felt like telling the story without going to my drawing table first. I hope you don't mind and I hope the anonymous snake photographer won't mind either. I'm sure the snake won't care.

Meanwhile, I did find a wonderful article called 'Web Design: The First 100 Years'. If you take a peek the mid-90s layout style is a design statement. This is a great talk, well worth reading, especially if you're curious about why the gazillionaires who run Silicon Valley are bonkers.

Quote of the week:
“The real problem of humanity is the following: we have paleolithic emotions; medieval institutions; and god-like technology. And it is terrifically dangerous, and it is now approaching a point of crisis overall.”
~ E.O. Wilson
♡
Posted by susan at 6:47 PM 14 comments: 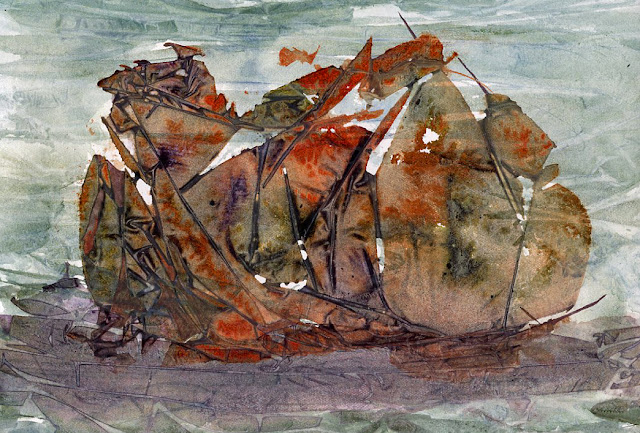 Have you ever heard of Grooks?  They're quite new to me. A grook is a short, aphoristic poem, revealing in a minimum of words and with a minimum of lines some basic truth about the human condition. Grooks were created originally during the Nazi occupation of Denmark. They began life as a sort of underground language just out of reach of the understanding of the Germans. They have since become one of the most widely read forms of composition in the Scandinavian - and English - languages. Grooks are the product of one of the most ingenious minds of this or any other century. Piet Hein (1905-1996) was a philosopher, mathematician, designer, scientist, game inventor and author who asserted that the great cultural divide was not between the haves and the have-nots, but between the knows and the know-nots.

Whenever you're called on to make up your mind,
and you're hampered by not having any,
the best way to solve the dilemma, you'll find,
is simply by spinning a penny.
No -- not so that chance shall decide the affair
while you're passively standing there moping;
but the moment the penny is up in the air,
you suddenly know what you're hoping.

My old clock used to tell the time
and subdivide diurnity;
but now it's lost both hands and chime
and only tells eternity.

The Miracle of Spring

We glibly talk
of nature's laws
but do things have
a natural cause?

People are self-centered
to a nauseous degree.
They will keep on about themselves
while I'm explaining me.

Thoughts on a Station Platform

It ought to be plain
how little you gain
by getting excited
and vexed.

You'll always be late
for the previous train,
and always in time
for the next

The Paradox of Life

A bit beyond perception's reach
I sometimes believe I see
that Life is two locked boxes, each
containing the other's key.

The Road to Wisdom 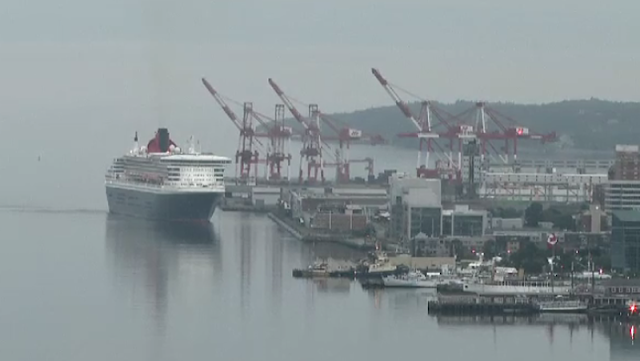 That was fun. A few days ago on the way home from a decently long drive and a longer walk we decided to stop by the grocery store - the one that's separated from Pier 21 by some railroad tracks. Looming over the parking lot that day was the Queen Mary 2. As residents of a seaside city seeing ships and boats of all kinds is a fairly routine experience, one never really taken for granted, but you do get used to seeing sailboats, cruise ships and container ships (you wouldn't believe how many containers filled with 'I ♡ Halifax' t-shirts leave the port). The ships we always look forward to seeing are the Tall Ships - especially when they arrive in largish numbers. Square rigged wooden sailing ships are a marvel to behold even if they aren't nearly so numerous and magnificent as the ones that sailed the world in centuries past.

Still and all it was amazing to come across the largest cruise ship in the world right here in our own little harbour. Once again I didn't have a camera so the pictures here are from local news outlets.

The first one is of the ship arriving in early morning when it sailed past the container port docks. That's Point Pleasant Park in the distance. 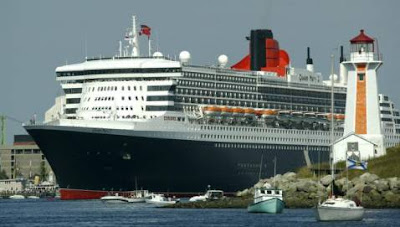 The second is her arrival in Halifax Harbour as she passed the lighthouse on George's island. 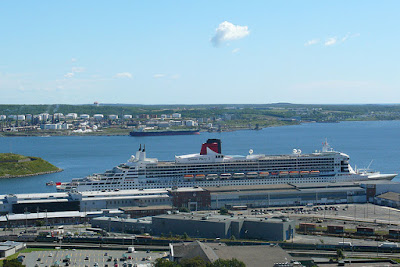 The third shows her docked at Pier 21 (taking up at least two spaces). The grocery store is the large grey roofed building in the foreground.

The last one is interesting because it shows the relative size of the QM2 to the Titanic.

From a sailing cruise ship, everyone on board spots a long bearded old man a ways away who is yelling and wildly waving his arms like a crazy fool. “Who is that there?” one of the passengers asks the captain. The cruise ship captain replied, “Sorry, I never figured that out. For the past 10 years when we pass that tiny island, he seems to show off more and more.”
♡ 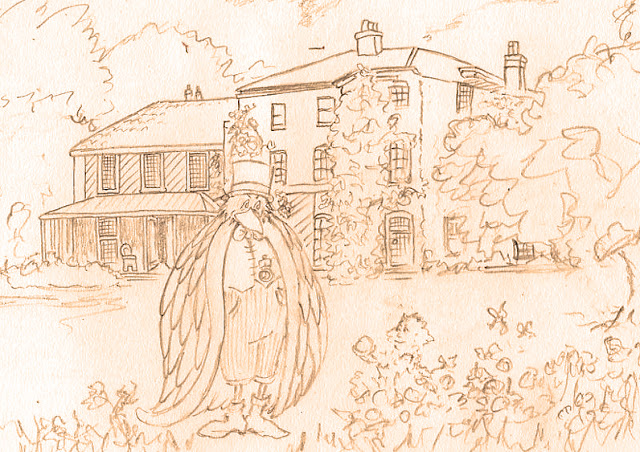 It's summer again here in the Northern Hemisphere and we're happy to report our cherry tomato plants are doing nicely. Not so well, perhaps, as the ones that grew in this earlier garden that Crow visited, but well enough for a large clay pot on a west facing balcony. While I'd rather have a garden, the good news is the pot doesn't require much in the way of weeding.

This afternoon Crow reminded me of one of Akira Kurosawa's movies - his last, in fact, called 'Dreams'. In the final section a young traveler from our age comes to a village where the only machines are wooden water wheels. Having walked and gazed in wonderment he stops to talk to an old man:

OM: Don’t need it. People get too used to convenience. They think convenience is better. They throw out what’s truly good.

T: But what about lights?

OM: Yes. That’s what night’s supposed to be. Why should night be as bright as day? I wouldn’t like nights so bright you couldn’t see the stars.

T: You have paddies. But no tractors to cultivate them?

OM: Don’t need them. We’ve got cows and horses.

T: What do you use for fuel?

OM: Firewood mostly. We don’t feel right, chopping down trees, but enough fall down by themselves. We cut them up and use them as firewood. And if you make charcoal from the wood just a few trees can give you as much heat as a whole forest. Yes, and cow dung makes good fuel too. 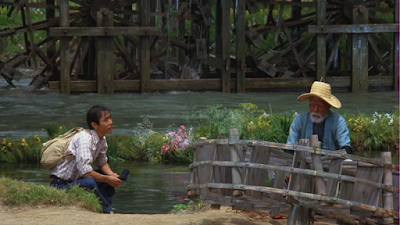 After pausing to take in the sounds of nature, the traveler continues to listen to the old man:

OM: We try to live the way man used to. That is the natural way of life. People today have forgotten they’re really just a part of nature. Yet, they destroy the nature on which our lives depend. They always think they can make something better. Especially, scientists. They may be smart, but most don’t understand the heart of nature. They only invent things that in the end make people unhappy. Yet they are so proud of their inventions. What’s worse, most people are too. They view them as if they were miracles. They worship them. They don’t know it but they’re losing nature. They don’t see that they’re going to perish. The most important things for human beings are clean air and clean water and the trees and grass that produce them. Everything is being dirtied, polluted forever. Dirty air, dirty water, dirtying the hearts of men.

A few days ago in escaping the news of droughts, wars, migrations and imminent financial collapse I spent some time reading some old Archdruid posts. I've slightly paraphrased a passage he wrote toward the end of this article as it fit so well with what Kurosawa's old man told the traveler:

A truly advanced civilization, here or elsewhere, might well have much in common with a community like this one: it might use very modest amounts of energy and resources with high efficiency, maximize sustainability, and build for the long term. Such a civilization would be very hard to detect across interstellar distances, and the limits to the energy resources available to it make it vanishingly unlikely that it would attempt to cross those distances; this would hardly make it a failure as a civilization, except in the eyes of those for whom the industrial-age fantasies of science fiction trump all other concerns.
♡