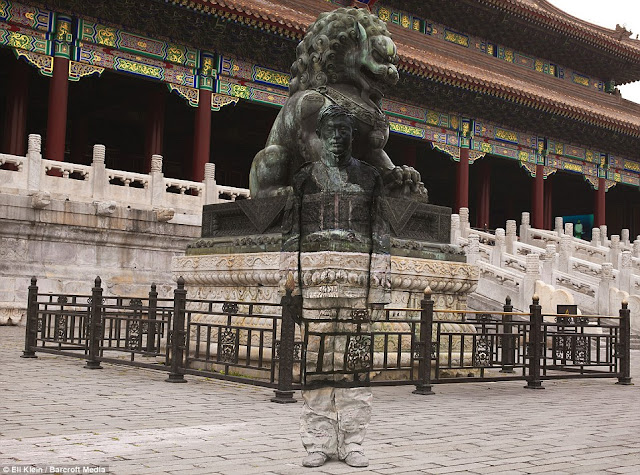 I wasn't familiar with the work of the artist Liu Bolin until a year or two ago when I ran across his amazing Invisible Man images on the web. What was most intriguing to me was the question about what had precipitated his idea of hiding in plain sight as a camouflaged man in mostly urban settings.

In 2005, the Beijing International Artists Camp, the world's largest community of Asian and Western artists, was ordered to be destroyed by the Chinese government with almost no prior notice. Riot police accompanied by bulldozers stopped the most vibrant art experiment in the history of China by knocking down more than a hundred artist’s studios. Liu Bolin was one of those artists. Prompted by his emotional response to the demolition of this site, Liu decided to use his art as a means of silent protest, calling attention to the lack of protection Chinese artists had received from their own government. Using his body by painting himself into various settings in Beijing, he created a space for the Chinese artist, preserving their social status and highlighting their often troubled relationship with their physical surroundings. That first series is called 'Hiding in the City'. Bolin followed up his Beijing series with two similar series of performances captured in Venice and New York City - Venice for its significance within the Western art tradition and New York City for the potency of the underlying conflicts between humans and the objects they create.

Liu Bolin isn't looking for a way to disappear as a person but encourages us to examine the damages caused by the economic and urban development on individuals. If you're interested in seeing more this site has a large collection of his work. If you're even more interested this video shows how one of the images is made. 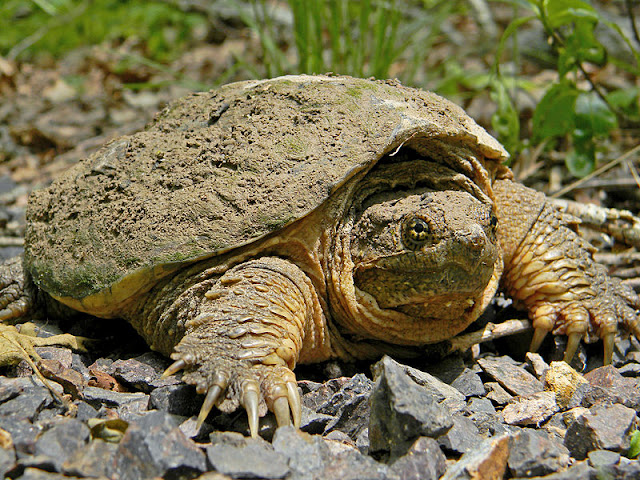 Some years (well, decades) ago my young son and I found a huge snapping turtle sitting on the road that circled Roger Williams Park in Providence. The serpentine lake that defines that park wasn't far but the turtle was very slow. In fact, he (or possibly she) was taking a breather, solemnly unaware in its reptilian fashion of the great danger it was facing from the cars that often hurtled along that byway. As it probably weighed 40-50lb there was no way I was going to try to pick it up. My son was eight and I wasn't going to let him try. You see I also knew they call them snapping turtles for a very good reason. They're known to be quite bad tempered when they're out of water and they can reach all the way around their bodies with their sharp beaks if you get too close - or, heaven forbid, try to pick one up by grabbing its shell.

So we stood and watched as it got back on the move - down the middle of the pavement. At least standing nearby we could wave cars around the thing. I didn't want to keep walking while waiting for the inevitable crash and crunch. Thankfully, it wasn't long before a couple of guys in a pickup truck stopped, guys with shovels as well as a lot of other landscaping tools. It took both of them working in unison with a shovel on either side to carry it from the middle of the road and down the slope to the water. They left. We left. If it climbed back out again it was none of our business.

Turtle stories aren't the most exciting ones but this one was good enough for the moment. Have you had a close encounter you'd like to share?

Meanwhile, another movie that made me smile that hopefully will do the same for you: 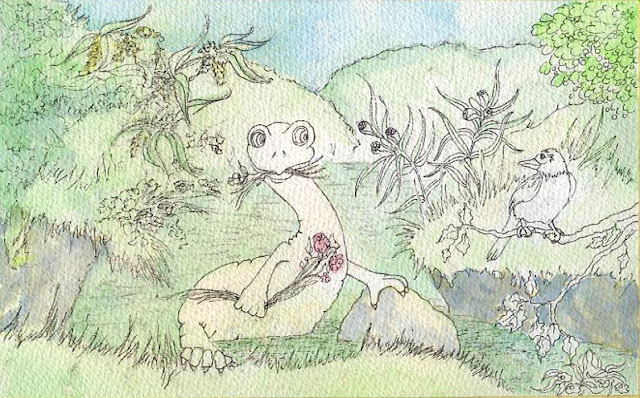 This is Anthony. A very long time ago when our son and his best friend were small children my husband wrote several stories to entertain them, stories that were only illustrated in their imaginations. Some weeks back, after reading Anthony's story again, I decided it was well worth the process of turning it into one with pictures. Well, I'm going to try. Other than drawing the limited number of pictures done in pen and ink for the Adventures Ink blog, I've never done a series of interrelated illustrations before. Although the fact that these will be in full color makes the project that much more complicated, I hope I'll have them all done within the next few months.

Drawing pictures is always a bit like exploring a new landscape in that you never know what or who will meet your eyes when you turn the next corner. After a couple of false starts Anthony showed up quite fully formed almost immediately. A picture somewhat like this one will be the first - I say like this because what you see above is an ink and watercolor wash I did today as an experiment. So far I have nearly a dozen reasonably complete pencil sketches of the story in its entirety that I don't plan on posting until all are done. I'm just afraid I'll either lose interest or the thread if I post them too soon but in the meanwhile there may be a few Crow pictures if he feels like posing again.

For now, and until I'm done with Anthony's story (which actually has a very different title), I'll likely post to the blog without drawing a separate picture nearly every time. How on earth did I ever start that habit?

Would you believe we've been having another blizzard here - at least that's what they call it when there's any snow at all with sustained winds blowing at 40+ mph. Maybe we should rent out a room to anyone who'd like to experience a North Atlantic winter for a few days. We'll even open and close the windows to provide sound effects. 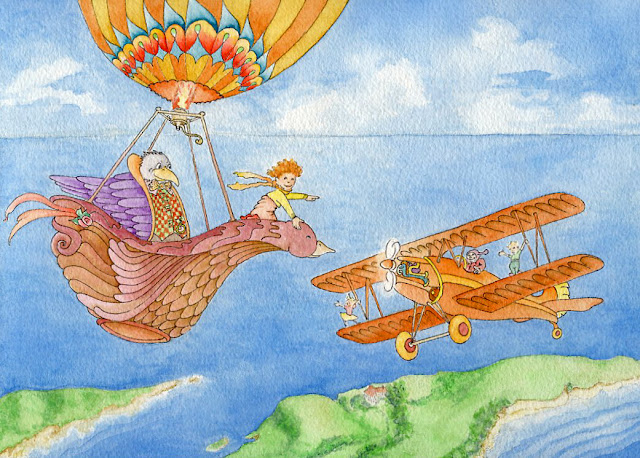 There are far too many pictures of snow right now so I thought I'd put up a favorite from warmer times and climes. You'll see why if you keep reading.

Having lived on the west coast of the US for seventeen years we've found it impossible to keep our windows completely closed even during the worst of winter in Nova Scotia. The funny thing is that depending on how wide open that is, and the general wind speed and direction, there's a very interesting mix of sound effects in our apartment. Even when there are no storms bearing down, this is a very windy place year round but especially so in winter. When the temperature is in minus numbers, whether Farenheit or Celcius, we seem to get the best tones with the windows barely cracked. Then they howl, shriek, moan, bellow, wail and clamor in between almost quiet moments when we hear only the tiniest whimpers of noise. Briefly things will be so peaceful you could almost hear a pin drop, or maybe use that respite to fall asleep if you're lucky. Now there's a blizzard blowing in and since it's likely we won't be able to go far tomorrow, we're thinking of an experiment. We'll open and almost close our windows to see if we can make them sing 'In The Good Old Summertime'. If it works out I'll post the song for you.

Meanwhile, I found this amazing movie from 1923. Gladys Ingle, a member of a barnstorming troupe called the 13 Black Cats in the 1920s, was a wing walker. In this film, she shows her fearlessness in classic barnstorming fashion to save an airplane that has lost one of its main wheels. Carrying a replacement wheel on her back she climbs onto the wing of the rescue plane while the soundtrack plays an old song called 'Up She Goes'.

Ingle transfers herself from the rescue plane to the one missing the main landing gear tire. She then expertly works herself down to the undercarriage only a few feet from a spinning propeller and fixes the new wheel in place. I rarely post these kinds of videos but this one was so neat I had to show you. Apparently, she went on to live to be 84 but I'm guessing she gave up this kind of activity when jets were invented. 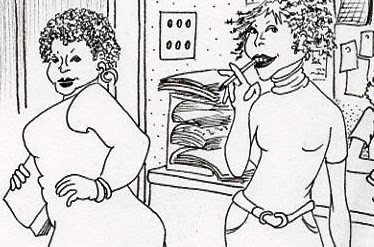 Too much time has gone by since the last Adventure's Ink story but I thought you might like to know there's a new one next door. It's about work, not usually a topic to provide entertainment but often enough the only weird fun we get to have with strangers. Some of them are most strange indeed.

I hope you enjoy reading 'the lottery'.