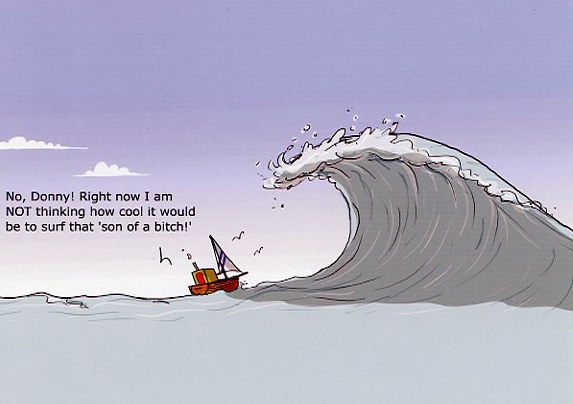 These are the names of just a few of the visitors who have caused a lot of misery and destruction in this part of the world. We've been watching pictures from the satellite trackers of another big hurricane expected to make landfall along the heavily populated east coast of the US. She's already done major harm. Nobody is quite sure how much more will be done.

I know these things are natural and can't be entirely prevented but it seems to me the sheer size and power of the storms being generated could be ameliorated if our leaders and corporate owners took global warming seriously. Whether or not the sun is warming the earth more than it was there's not much doubt the Anthropocene age is upon us and, as the old saying goes, 'When you find yourself in a fire, the best thing to do is stop adding fuel'.

What would be best is if these warnings are overblown. Meanwhile, I hope you and those you love aren't in Sandy's path as we keep our fingers crossed. 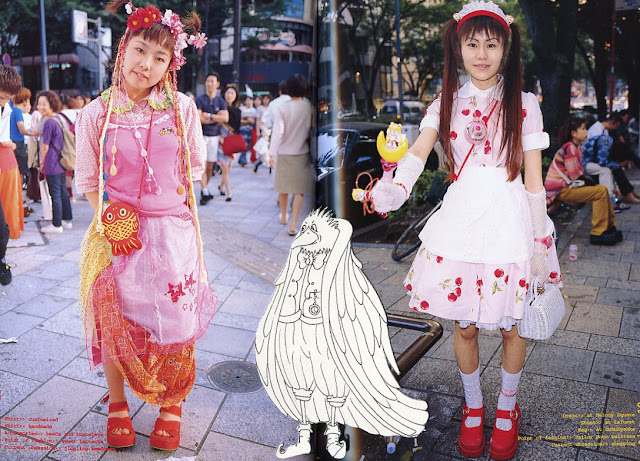 As you may have noticed, my friend Crow has his own unique way of dressing - comfortable yet elegant - but he's not averse to examining new human fashion trends. He tells me that most clothing he sees in the modern west has been tending toward boring and ugly these past few decades and in hopes of encouraging me to dress with a little more panache, he produced this picture of himself posing happily with a couple of young women he met on the street in Tokyo a few years ago. I'm not quite sure I'm ready for this level of style, it was the fine workmanship and beautiful fabrics of 1930's garments that still inspire me, but I can see his point. The only problem is that it's next to impossible to find clothes that are stylish and well made these days and even spending lots of money just means you're likely to end up with a name brand hoodie.

In the past 50 years fiber consumption has gone from 10 million tons a year to 82 million tons.

The average shopper buys 64 items of clothing a year.

The average shopper throws away 70 pounds of clothing every year.

Charity shops only put up for sale about 20% of donated clothing. The rest is sent to what is euphemistically called recycling but is actually a dump or landfill.

Do you have problems finding good clothes these days? Did you ever or do you still sew? It seems to me a lot of fabric stores have gone the way of the dodo in recent years but there are still a few. Since most young people don't learn how to make or alter their own clothes anymore I was interested when Crow told me about a booming little business in Paris that's set up like an internet cafe. Called the Sweat Shop, it has ten sewing machines you can rent by the hour or the day as well as a giant work table and many of the accessories you'd need to make something unique of your own to wear. Naturally, since it's in Paris, there's food, drink and cool places to sit and chat - probably some skilled advisors around too. It seems like such a good idea should spread a lot further.

What do you think?

There I was a week and a half ago finally starting to feel settled in our new place with everything unpacked and put away nicely. Naturally, after just being here for a couple of weeks, we were and are still setting things up but all that was coming along fine. Meanwhile, I'd come across a sweet and simple little story I'd never heard that I thought would be worth illustrating. It only requires a few pictures and, as you can see, I'd begun some preliminary sketches of cute puppies who appear in the tale.

Then we were invaded by minions of the property management company. The first sign was an out of the blue announcement slipped under the door that our apartment (along with all those above and below us) was scheduled to have new piping installed in the bathroom. In order to do this the plumbers would need full daytime access to our bedroom closet for several days and, in order for the plumbers to work, carpenters would be arriving the day before to remove the wall inside said closet. We were required to remove everything from the closet and be prepared every morning to be without full use of the bathroom (fill tub with water for toilet flushing) until further notice. Since then we've listened to hammering, sawing, clanging, banging, shouting, and all manner of distracting noises from 8:30 to after 6:00. Guys have been tramping in and out while we try to stay out of their way, each other's way, and get on with our projects while also maneuvering around the closet contents in the living room. Sometimes we go out more often than usual just to get some peace. In the meantime there have been two major leaks including one that required an emergency crew after 9:00 at night. 'What's that ticking in the closet? Uh oh'.

The plumbing project was finally finished by last evening allowing the carpenters to return today. They'll be followed by the plasterers tomorrow and the painters by Friday. 'Thank goodness', we told each other, 'it will finally be over and we can have our apartment back'. Today another notice was slipped under the door telling us that someone somewhere in the building thinks they saw a cockroach. The exterminators will be coming tomorrow to put roach traps in everybody's kitchens and will return weekly until they're sure there's no problem. If this goes on much longer I'm going to have to start charging a toll at the door.

I'm hoping to get back to my own project soon - or another now that my concentration is gone.
How is your autumn coming along? Uneventful, I hope. 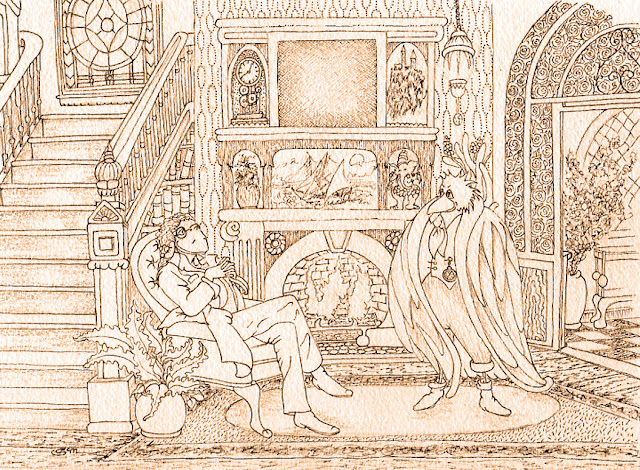 When I brought Crow and his friend their afternoon tea I heard them discussing one of those irritations of modern life that drive me crazy too. Why is it that grocery stores announce with pride they have no plastic carry bags to hand out to customers but just about everything they sell is encased in layers of the stuff? Cosmetics, personal care items, toys, eggs, chocolates, produce, cookies, snack foods, tools and appliances are just a few items that create packaging discards we all deal with. A single purchase can mean bringing home more packaging than product.

Since 1960, the use and disposal of single-use plastic packaging has grown from 120,000 tons to over 12,720,000 tons per year today. It used to be the idea that packaging protected a product from damage but nowadays it's just another marketing tool to get us to buy things. Apparently the manufacturers think items packed in hard shelled, difficult (and possibly dangerous) to open plastic packages appear to be more attractive. Whatever happened to cellophane and cardboard? What makes plastic packaging worse is that it raises the cost of every item covered in the stuff by about 10% and then we have to find some way to recycle the stuff.

No wonder Crow prefers the comforts of the 19th century.
Posted by susan at 7:35 PM 23 comments: 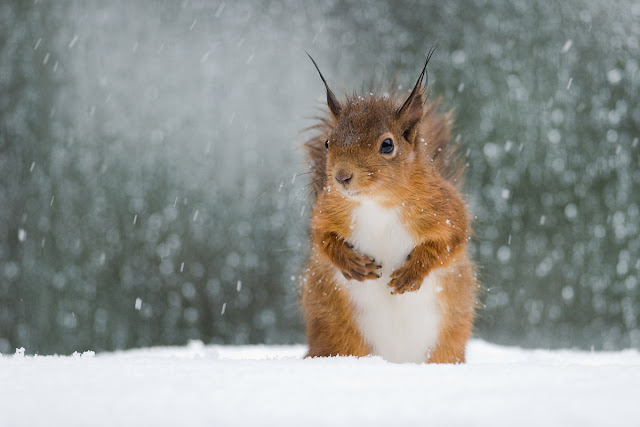 by a squirrel. Late last fall I began a new cold weather routine of carrying a little sack of peanuts on our regular walks to a favorite sitting spot at the local oceanside park. I kept it up until springtime when the crows, bluejays, and one tiny squirrel had found other things to do and were no longer waiting for handouts.

A few days ago, on a beautiful cool and breezy afternoon, we were sitting on that bench again watching a few sailboats negotiate the choppy waters of the eastern arm when I suddenly noticed a movement in the grass close to the bench. It was the tiny squirrel from last year (or his twin brother) staring at me. Then he sat up on his hind legs and cocked his little head as if to say, 'Where are my nuts? You did bring them, didn't you? It isn't possible you've forgotten to carry them, is it? Don't you see how hungry I am?'

Needless to say,  there was a grocery store stop on the way home.

I recently read some articles in a science journal where there were some ongoing disagreements about whether animals are conscious and capable of planning their actions. Obviously those who argued the negative view have never spent time paying attention to squirrels.

Have you had any similar encounters?
♡
Posted by susan at 7:52 AM 26 comments:

the other Crow debates

Crow T. Robot was one of the stars of my favorite television program ever (well, so long as I don't count the Simpson's or Monty Python's Flying Circus) Mystery Science Theater 3000 - better known as MST3K. When he turned up again recently and heard there was yet another election going on somewhere, he proved amenable to answering some of the debate questions posed for the last election. For lack of having anything more entertaining on hand we opted to share the questions and the other Crow's answers* with you:

Q: Please describe some of your personal tools for dealing with adversity?
CTR: I smell conspiracy in everything and I don't know what I mean most of the time. I felt a disturbance, like a million monkeys cried out at once, then all were silenced. The world... is no more.

Q: What experiences have you had that have helped you deeply understand the mindset and values of another culture?
CTR: Well... I've undergone a complex personal evolution wherein painful confusion has given way to what I like to think of as some degree of wisdom culminating in my current Zarasthustrian sense of self. Is that it?

Q: Do you have the courage to be lonely?
CTR: Oh, I don't know, at least now I have something to write about. You know, I've been thinking about annotating the Manhattan phone directory.

Q: How will you spend quiet time in anticipation of a tough decision?
CTR: Are we in this scene, or are we supposed to be back with the mole-people?

Q: Share some examples of your ability & willingness to be decisive.
CTR: I don't think it's a good idea to kill someone when they're driving.
What's the point of a helmet in skydiving, in case you land on your head?
Is that vague enough for you?

Q: What is your negotiating style/approach/philosophy?
CTR: Ya' know, if we PRETEND we know whats going on, this is actually kind of exciting.

Q: What is your definition of leadership?
CTR: I wanna decide who lives and who dies.

Q: What is your overarching purpose as a leader?
CTR: Put your helmet on; we'll be reaching speeds of 3.

Q: What could cause you to fail as the Leader?
CTR: You're really stupid if you get hit by a car AFTER the Apocalypse.

Q: What do you believe should happen to those close to you when they make an honest mistake?
CTR: So, the only effect of his complete immolation is... minor irritation and redness?

Q: How will you avoid becoming part of the "good old boy" network that has created and is
content with the way things are now?
CTR: The light is red unless there's an election!

Q: How will you keep young people engaged?
CTR: You're starting to catch on, Kemosabe.

* All the above are both real questions and true Crow quotes.
Posted by susan at 7:49 AM 10 comments: