out of the blue

A couple of days ago I was surprised by an email asking if the painting Selkie Sea was available to purchase. It was surprising because I don't have much of an internet profile other than the blog and you friends who are kind enough to visit here.

The only places some pieces of my work can be seen are the generally abandoned shop I opened on Etsy in 2009 and the site on Fine Art America where I've posted a few paintings that can be bought as greeting cards or prints. I've never sold much at either place (FAA is where I go when I want to print some cards to send), the chief reason being that I don't use social media platforms. The idea of trying to sell my work makes me very uncomfortable.

However, when I post a picture on the FAA website there's a little box I can check that will say that the original is for sale. A couple who live in Maine saw that I'd checked 'yes' in that box and sent me a message. The painting was here safely packed away in one of my portfolios but today it's on its way across the border to its new home in a seaside cottage across the border.

Sometimes we learn that something we've done has made someone happy.

They sent me the lyrics to a story/song I'd never heard.

when the time comes

When The Time Comes from Charles Gay on Vimeo.


The semi-nomadic Samburu tribe of Kenya still practices female circumcision, despite the fact that it was made illegal in 2003 by the Maputo Protocol (which was ratified by 37 African countries).  However, slowly but surely brave women (with the support of a number of men) are speaking up for their rights and demanding that their daughters are not put through this coming of age ritual any longer.

This may sound like something of a depressing way to spend ten minutes of your time, but I guarantee that you will be uplifted by this very human story.  The debate among the tribespeople is intergenerational with one of the male village elders (inadvertently, I think) giving the game away when he says that a circumcised woman is easier to control – and that is, ultimately what this ritual is all about.  One woman cleverly counters this with an argument with which few red-blooded men would be inclined to disagree.

Beautifully directed by Charles Gay, this short documentary shows a usually hidden side of a secluded culture – it is very brave of these women simply to talk about the subject let alone commit their opinion to film.  It also reveals a colorful and vibrant culture in the throes of change. The amazing traditional clothing worn by the often very beautiful Samburu women is a feast for the eyes, while the subject gives us much food for thought.

This has been cross posted from Kuriositas.
♡
Posted by susan at 11:33 AM 8 comments:

ready or not - some humo(u)r 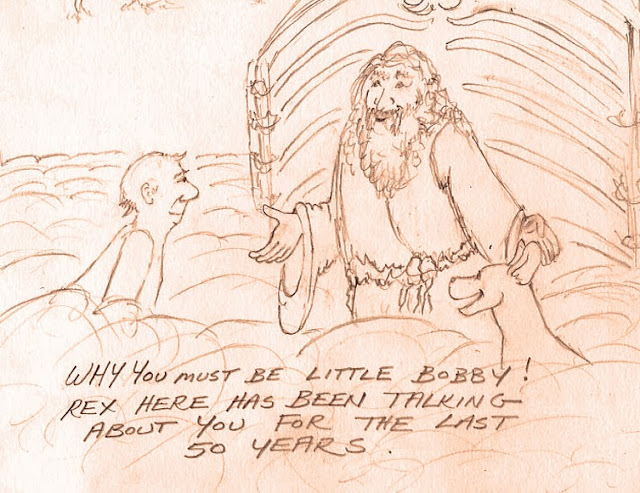 I hope whoever drew this cartoon originally will forgive me for scribbling a version as I remembered it.

A magician worked on a cruise ship. The audience was different each week so the magician did the same tricks over and over again. There was only one problem: the captain's parrot saw the shows each week and began to understand how the magician did every trick.

Once he understood, he started shouting in the middle of the show. "Look, it's not the same hat!" or "Look, he's hiding the flowers under the table!" or "Hey, why are all the cards the ace of spades?"

The magician was furious but couldn't do anything. It was, after all, the captain's parrot. Then one stormy night on the Pacific, the ship unfortunately sank, drowning almost all who were on board.

The magician found himself on a piece of wood floating in the middle of the sea with, as fate would have it, the parrot. They stared at each other with hatred but did not utter a word. This went on for a day... and then 2 days...and then 3 days. 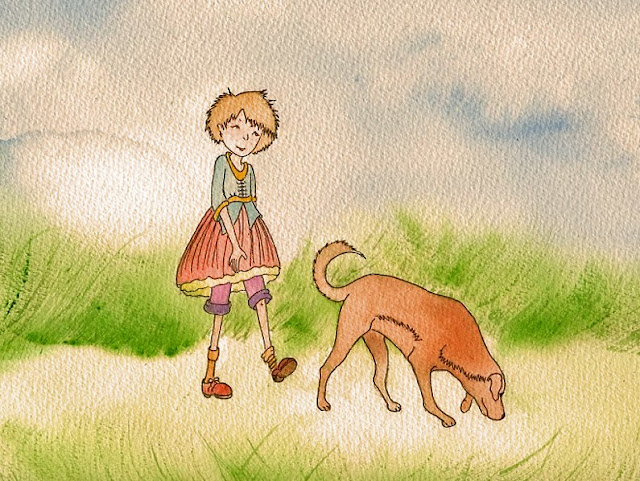 I'm almost embarrassed to post a picture as simple as this one done on a recent  afternoon but I'm going to do so anyway. This is no brothers Detmold, nor Edmund Dulac, nor any of the other watercolorists of the early twentieth century whose work I admire so much. It's not even as complicated as work I did years ago when I had a full time job and a busy schedule that accounted for most of my waking hours. The fact I painted a number of fairly large and complicated pictures, some of which took weeks to complete, seems strange to me now. Now I have less patience - or perhaps it's that I feel I have less time (no, I'm not ill) but every so often some little image appears and I just want to see it done. I don't want to wait. So here's this one that reminds me of words I once heard in a dream or brief vision just before sleep came - the color of Heaven is green. I don't know what that meant, if anything, but I do know that there's no happier time for me than walking along a sunlit beach with a good friend.

It's the simple things in life that bring us our best and most satisfying experiences. 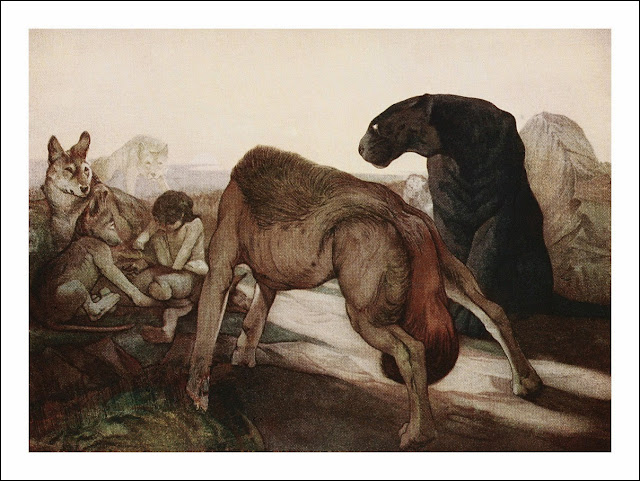 Although all of these authors wrote books that became famous as stories for children I don't think any of them wrote the books strictly for children. Like most great children's classics, the authors used the unintimidating forum of children's literature to speak to people of all ages with the hope that somehow we'd understand the deeper messages they conveyed. 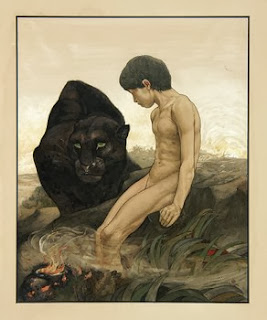 For the sake of space I've left a number of wonderful books off the list but the one I want to mention now is Rudyard Kipling. When we say "The Jungle Book" most of us invariably think of Disney's films, both animated and live action, that have become the norm for Rudyard Kipling's immortal children's stories. While the Disney interpretation is fun and enchanting, it makes a dramatic departure from the actual stories and takes considerable creative license in telling just a part of the Kipling stories. Even what we get from Disney falls far short of the applicable parts of Kipling's original that Disney used. What? Kaa, the snake, as Mowgli's friend and powerful ally? What? A deeper story of Mowgli's experience as a wolf and his relationships with Mother wolf and Father wolf? Oh yes, much, much more.

Kipling's original masterpiece also includes several other wonderful chapters about the continuing adventures of Mowgli and also adds the marvelous tale of "Rikki-Tikki-Tavi," the heroic mongoose whose battles with wicked cobras in an Indian garden easily matches Mowgli's showdowns with Shere Khan. 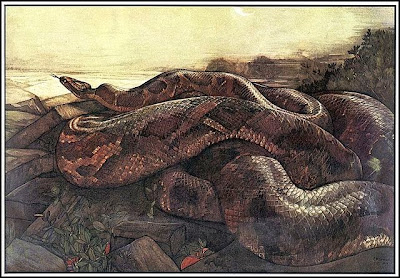 The book also includes the tale of "The White Seal." This short chapter of "The Jungle Book(s)" provides a wonderful commentary, in the form of animal parable, on human society, competition, male ego and human pride. Our hero, Kotick, the white seal, through his fearless explorations and his willingness to fight for a dream, changes the minds of his parents, his peers and his society for the better. The invitation to each of us is very clear to find and free the white seal that exists in all of us.

If you haven't seen the Disney film in a while I thought I'd share what was probably everyone's favorite scene when Baloo (Phil Harris) and King Louis the orangutan (Louis Prima) sing a scat duet (never mind Sebastian Cabot as Bagheera the worried black panther):

The pictures here are copies of the Jungle Book illustrations done by the brilliant 19th century watercolorists, Maurice and Edward Detmold.

The other cool thing about all of these books is that they're cheap and easily available.
♡ 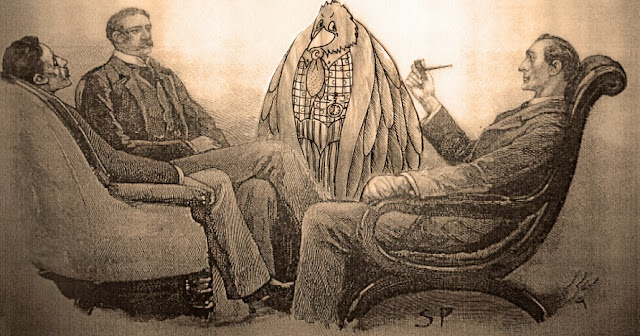 When the world refuses to provide the rationality I would prefer it's good to know I can always count on Sherlock Holmes. For the past week my reading time away from the internet has been spent enjoying Arthur Conan Doyle's magnum opus, 'Sherlock Holmes: The Complete Stories'. The four novels came first and now that I've reached page 1051 of this 1400 page book, I'm already feeling sad it will end all too soon.

My friend Crow once spent some time assisting Holmes and Watson in the Mysterious Case of the Four Feathers on Her Majesty's Pillow, a story that never did become part of the published series since even now its shocking revelations could disrupt our confidence in the powers that still rule. Crow has decided that might not be such a bad thing and is busy at this moment going over his notes about the case. Perhaps we'll all know the essentials of that tale soon enough.

One of the most enjoyable parts of reading these stories is in reading about the stories Watson left out of the series. This passage is typical:

'In this memorable year of 1895 a curious and incongruous succession of cases had engaged his attention, ranging from his famous investigation of the sudden death of Cardinal Tosca - an enquiry which was carried out by Holmes at the expess desire of His Holiness the Pope - down to his arrest of Wilson, the notorious canary trainer, which removed a plague-spot from the East End of London.'


What? A notorious canary trainer? Who wouldn't be interested in learning more about that story? Even though that one will never be told (unless Crow participated in that case too), the ones that remain are sufficient to prove the genius of Sherlock Holmes:

“What you do in this world is a matter of no consequence. The question is what can you make people believe you have done.”

“Don't talk, Anderson. You lower the IQ of the entire street every time you open your mouth.”

“Education never ends, Watson. It is a series of lessons, with the greatest for the last.”

“I'm not a psychopath, I'm a fully functioning sociopath. Do your research.”


Now it's time to sharpen Crow's quill pens and warm the brandy. I'm looking forward to another evening in his library sitting in the comfort of my favorite fireside chair reading while he writes.

♡
ps: modified illustration from the Strand Magazine
Posted by susan at 1:15 PM 14 comments: