a zen story - fate is in your hands 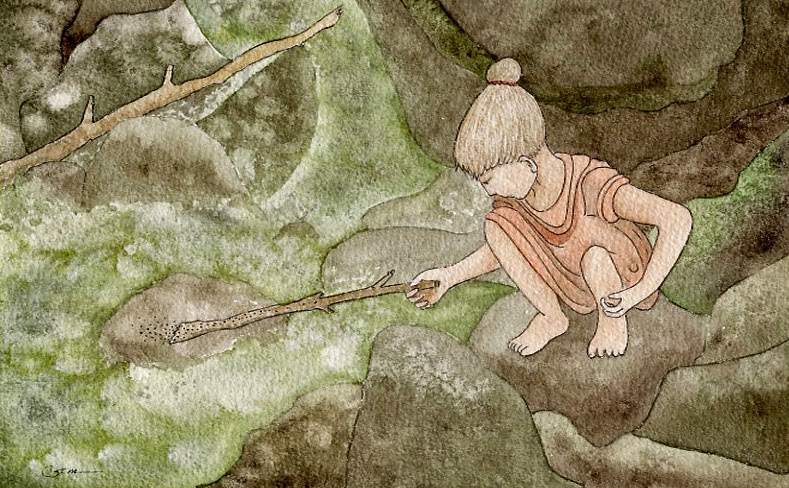 In a time long past there was an old monk who, through diligent practice, had attained a certain degree of spiritual penetration.

He had a young novice who was about seven years old. One day the monk looked at the boy's face and saw there that he would die within the next few months. Saddened by this, he told the boy to take a long holiday and go and visit his parents. 'Take your time,' said the monk. 'Don't hurry back.' For he felt the boy should be with his family when he died.

Three months later, to his astonishment, the monk saw the boy walking back up the mountain. When he arrived he looked intently at his face and saw that the boy would now live to a ripe old age. 'Tell me everything that happened while you were away,' said the monk.

So the boy started to tell of his journey down from the mountain. He told of villages and towns he passed through, of rivers forded and mountains climbed. Then he told how one day he came upon a stream in flood. He noticed, as he tried to pick his way across the flowing stream, that a colony of ants had become trapped on a small rock in the midst of the flooding stream. Moved by compassion for these poor creatures, he took a branch of a tree and laid it across one part of the stream until it touched the little island. As the ants made their way across, the boy held the branch steady, until he was sure all the ants had escaped to dry land. Then he went on his way.

'So,' thought the old monk to himself, 'that is why the gods have lengthened his days.'

on the terrace wih Crow 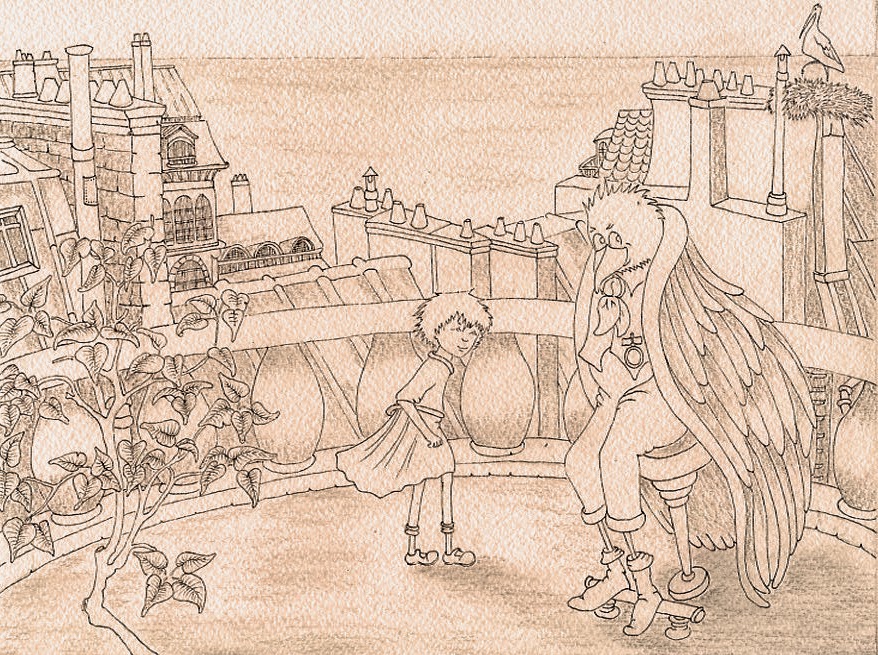 As Crow and I watched the sun set over the sea from his terrace perch while one of our young friends marveled at the view, we talked about how cities look now compared to the way they did 100 years ago. The seriously big change came about in the 1960s when two developments coincided: steel framed high rise buildings and city streets ruled by cars. While there aren't too many cities in North America that haven't been entirely overtaken by this phenomenon, it's no wonder people still enjoy going to Europe for their holidays.

Of course, I haven't been there for a long time but Crow tells me the high rise/high speed method of city planning has made inroads there as well. It's also true that Europe still has metropolitan centers that don't look too different now than they did long ago - with the major difference being that people of modest income can no longer afford to enjoy the benefits.

Benefits? Yes. Streets that offer varied, eyecatching stimuli every 4 to 5 seconds interest us, and those that don’t bore us. This works out to façades of 16-20 feet for people moving at average walking speeds. Whenever someone notes that a commercial district full of small and unusual storefronts feels human whereas a featureless big-box store saps the soul, there’s more to those preferences than simple nostalgia.

While Crow can travel in almost no time to anywhere, he understands that our natural speed limit is in single digit numbers rather than average car speeds. We like to have things to look at, especially each other. We feel more comfortable in surroundings set at a smaller scale.

Jahn Gehl is a Danish architect who has been promoting his philosophy of a return to people friendly urban development for years. This interview with him is good, but if you don't have time for reading here's a trailer for a documentary about him called The Human Scale:

Meanwhile, it's time for Crow and I to retire to the dining room.
♡

(This is another Crow illustration awaiting color that I already like enough to show you. He does too.)
Posted by susan at 2:01 PM 18 comments:

we all make mistakes 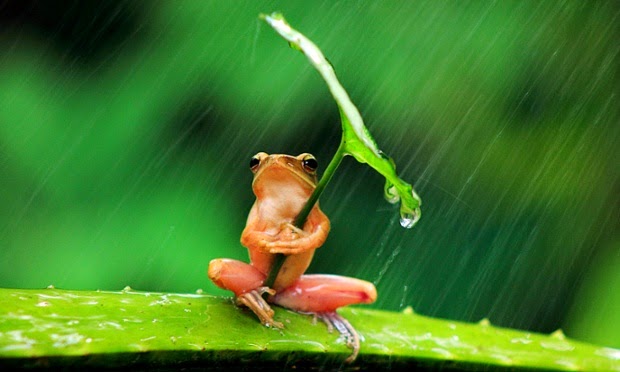 It appears that along with several other websites I was duped by the story I posted a few days ago about the millions of unsold cars clogging parking lots all over the world. Lindsay brought this to my attention in a comment he'd left earlier today linked to a Bloomberg article.

I can only blame myself since I should have been more suspicious after having looked at Vince Lewis's website (he who posted the article) where I found no references in any of his posts. Just because I found the link on a trustworthy site doesn't absolve my error.

Nevertheless, this doesn't mean all is well with industry and commerce in general. The story sounded right then, and in essence, still does. What is true is that the world is in a crisis of overproduction and the force of such exponential growth is very dangerous. No matter when those pictures were taken those fields of cars are a wake up call to those willing and able to listen.

new picture in the works so there'll be more soon.
♡ 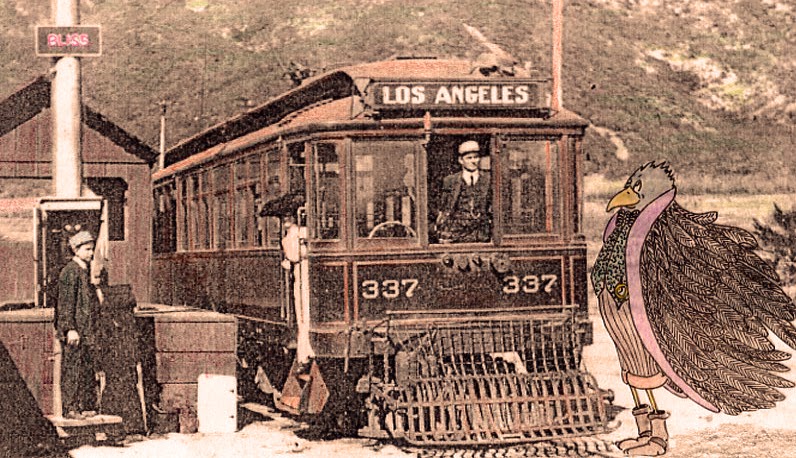 Crow and I were looking through some of his old pictures yesterday evening when we came across this tinted daguerreotype from 1891. At one time Los Angeles had the longest streetcar routes in the world. Then came the freeways and more cars than you can shake a stick at. If you don't believe me you can always watch 'Roger Rabbit' again or check wikipedia.

Times have changed again but not quite for the better yet. This morning I found an article filled with amazing pictures of the millions of cars that are being manufactured and then hidden away from view in huge lots. It would appear that while China has ghost cities where nobody lives we in the west have ghost cars that nobody can drive. This is a monumental waste and a serious misallocation of energy. What it boils down to is that as true demand collapses relative to supply, financial instruments demand continual growth.

"Its quite a pickle we have gotten ourselves into."

a walk in the park - Point Pleasant, Halifax 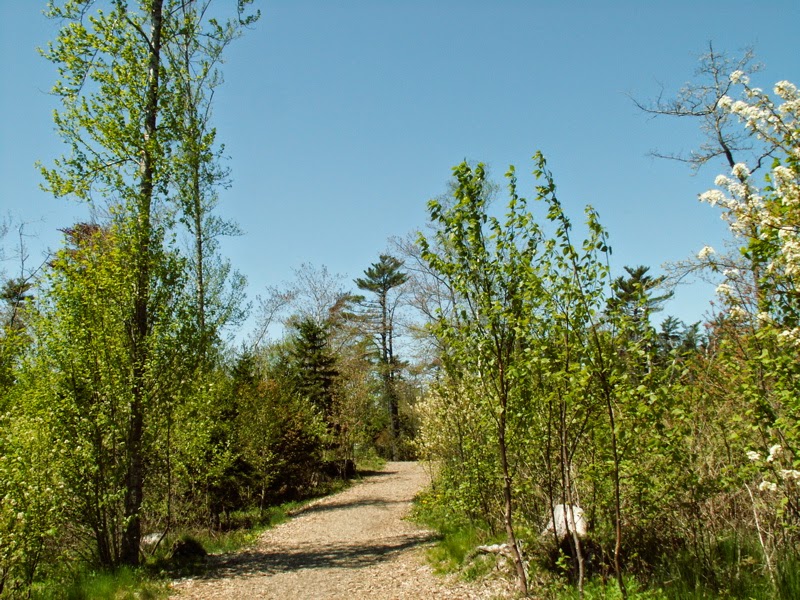 This morning I found a comment from my old friend, Lindsay, that said he'd like to see more pictures of Point Pleasant Park here in Halifax. It turns out I do actually have some despite the fact I rarely carry the camera. They weren't all photographed on the same day, but all were taken during the months of May and June.

Even as it's possible you've seen most of the pictures before, if you'd like a quick look at our favorite local rambling spot again you'll find them here.
Posted by susan at 11:16 AM 12 comments: 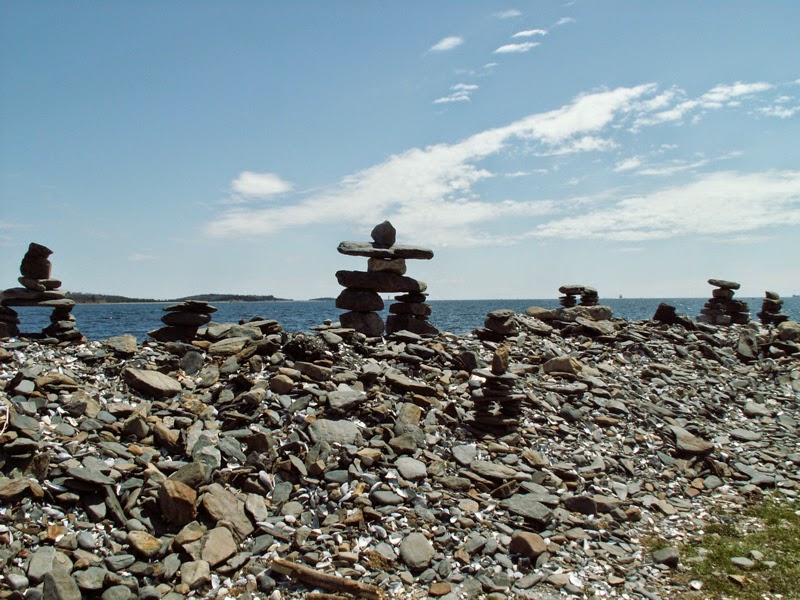 One day a few weeks ago, shortly after the last snow melted, we came across a rock maze that had been carefully laid out on the grass of Point Pleasant Park. It was probably 30 feet across and twenty deep. While my husband walked along its convolutions to the centre where there was a little rock shrine, I watched and wished I'd brought my camera - not to take a photo of him, but to record the result of the anonymous artist's effort. The maze hadn't been there the day before and by the next day the park maintenance crew had bulldozed its stones back to the rocky beach. After all, it will soon be time to cut the grass and you can't send lawn mowers over loose rocks. As Jer stooped to leave the last of our peanuts on the shrine he discovered a tiny red plastic frog another maze walker had left. 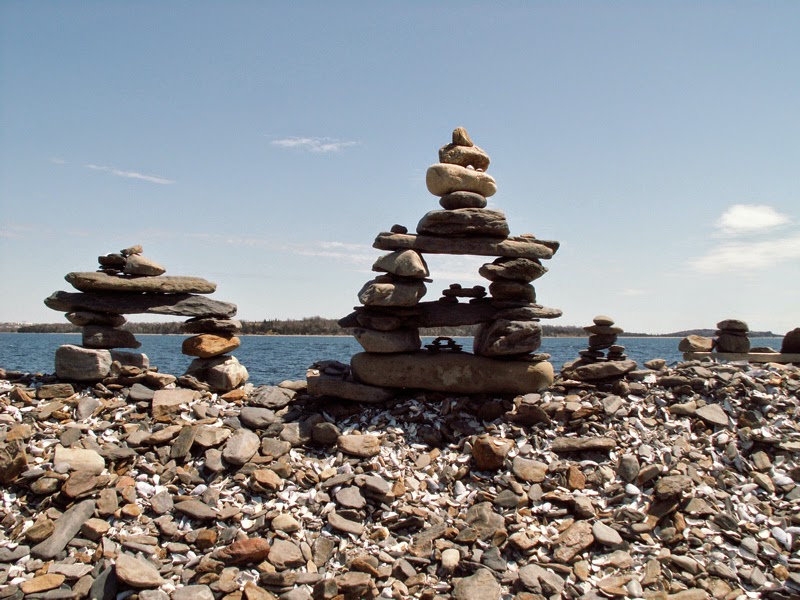 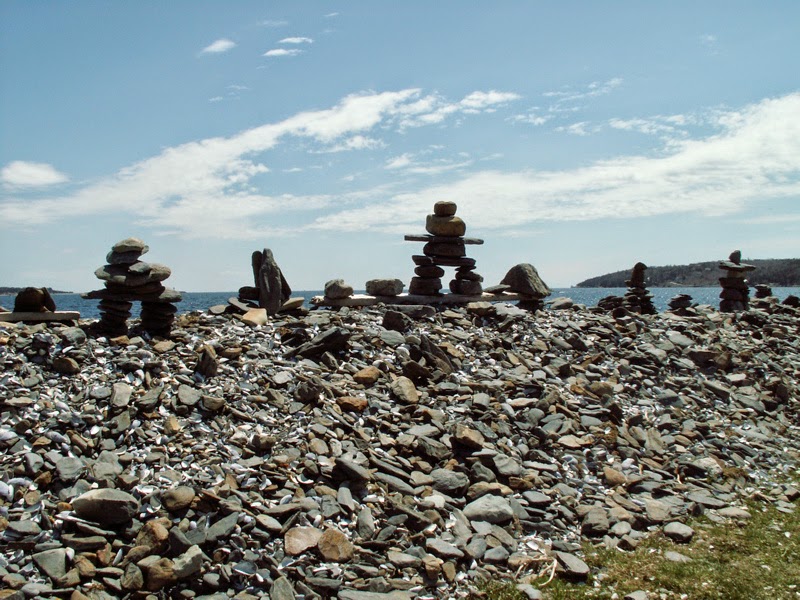 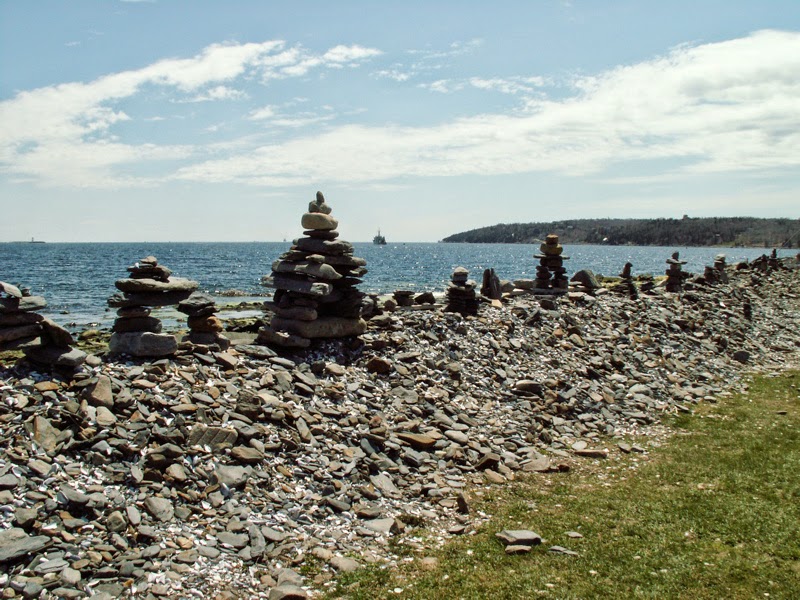 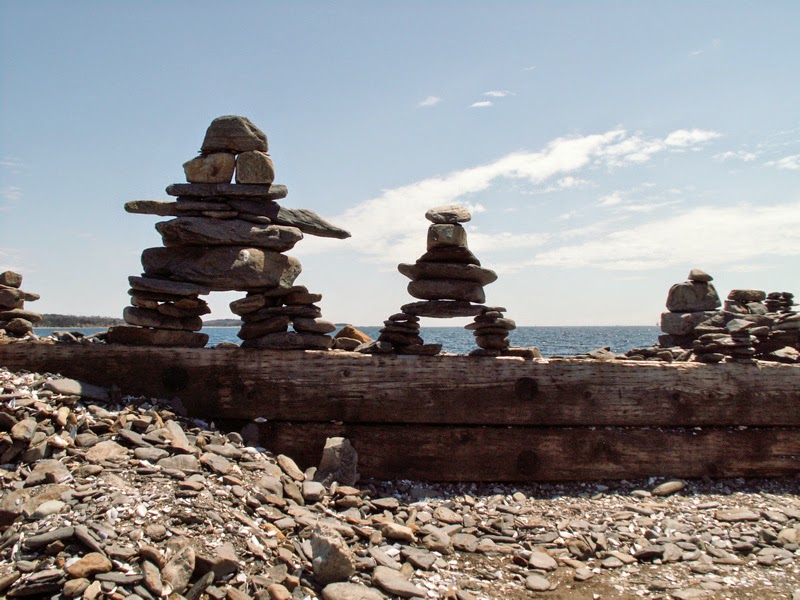 More recently we found the results of yet another spontaneous installation made from the rocks on that shore - yes, it's a very rocky shore. Today I took my camera.

There's something wonderful about artwork made from the materials contained in natural surroundings that shows what's best in us. That days can go by with nobody knocking down these precariously balanced sculptures is one of the things I love most about Halifax.

a closer look at 'morning frog' 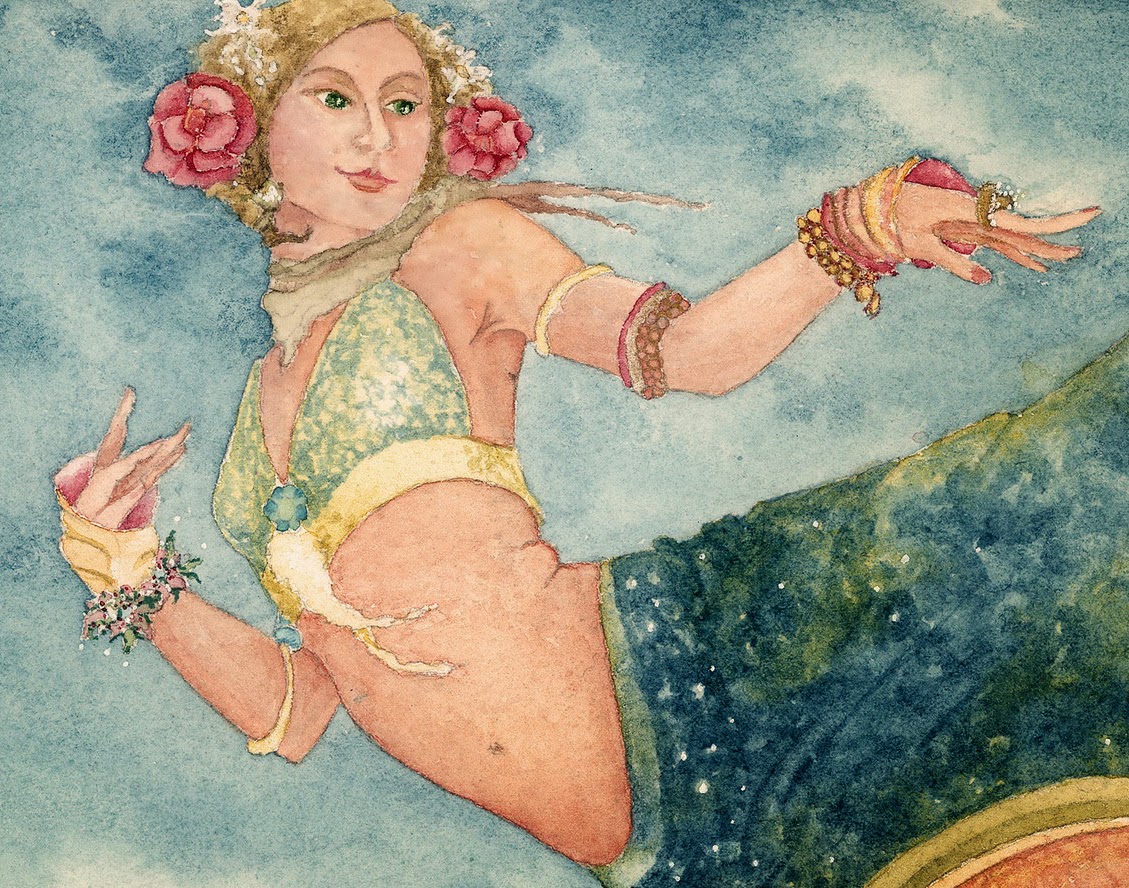 Most of the pictures I've painted since I began blogging nearly eight years ago have been done for mutual entertainment or simply to illustrate a concept. As far as serious watercolors have been concerned I've become somewhat lax in my efforts. As it's difficult to show details of larger pieces on a small screen it's generally been a better bet to make simpler ones. A few days ago as I was reviewing some of the high resolution photographs I realized it might be interesting to show you some of the close-ups of paintings I've done that took far longer than two or three days to paint. 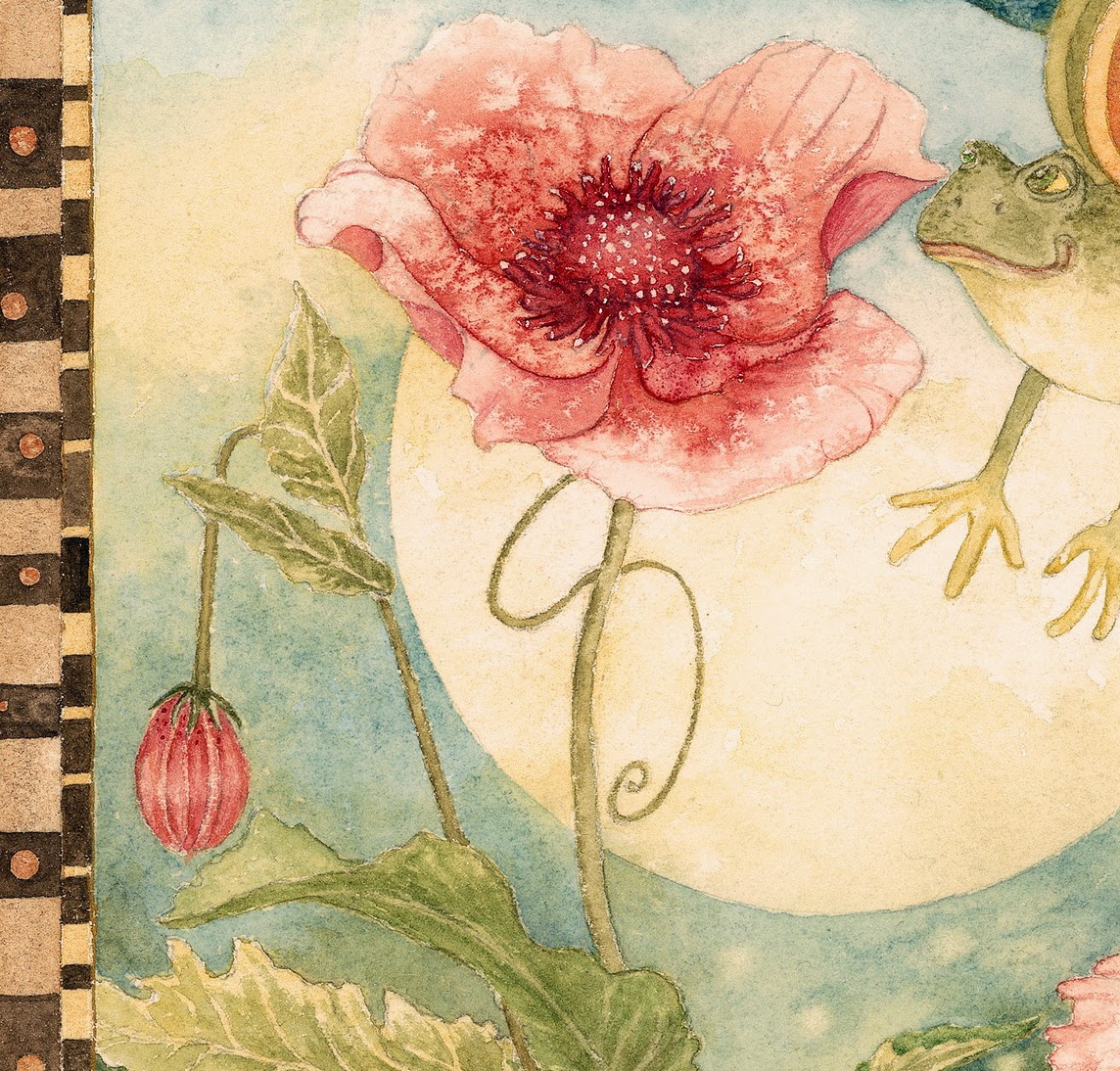 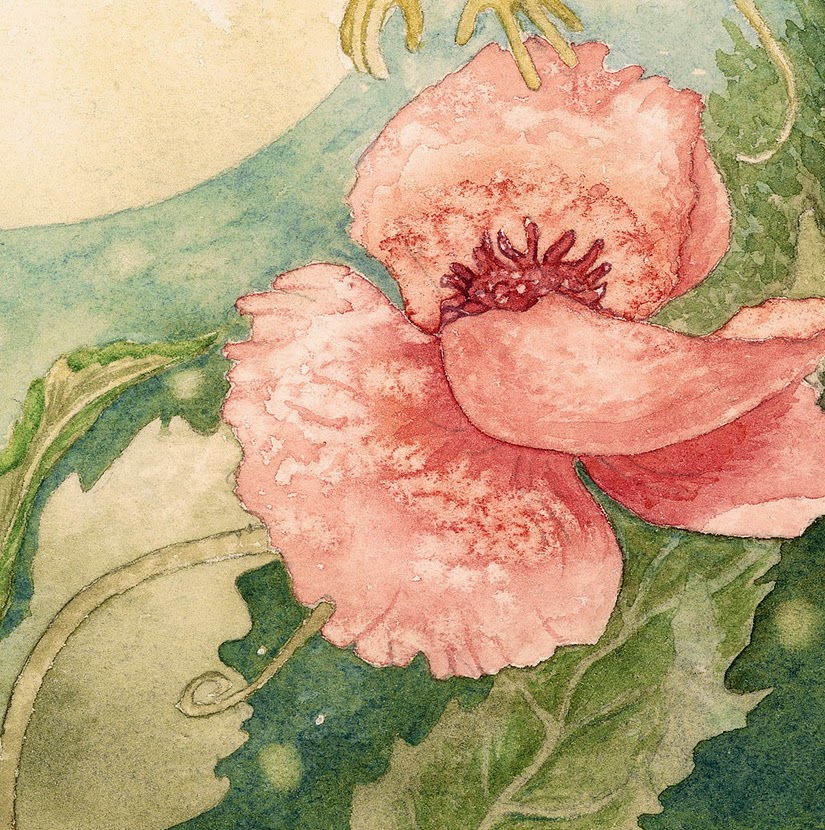 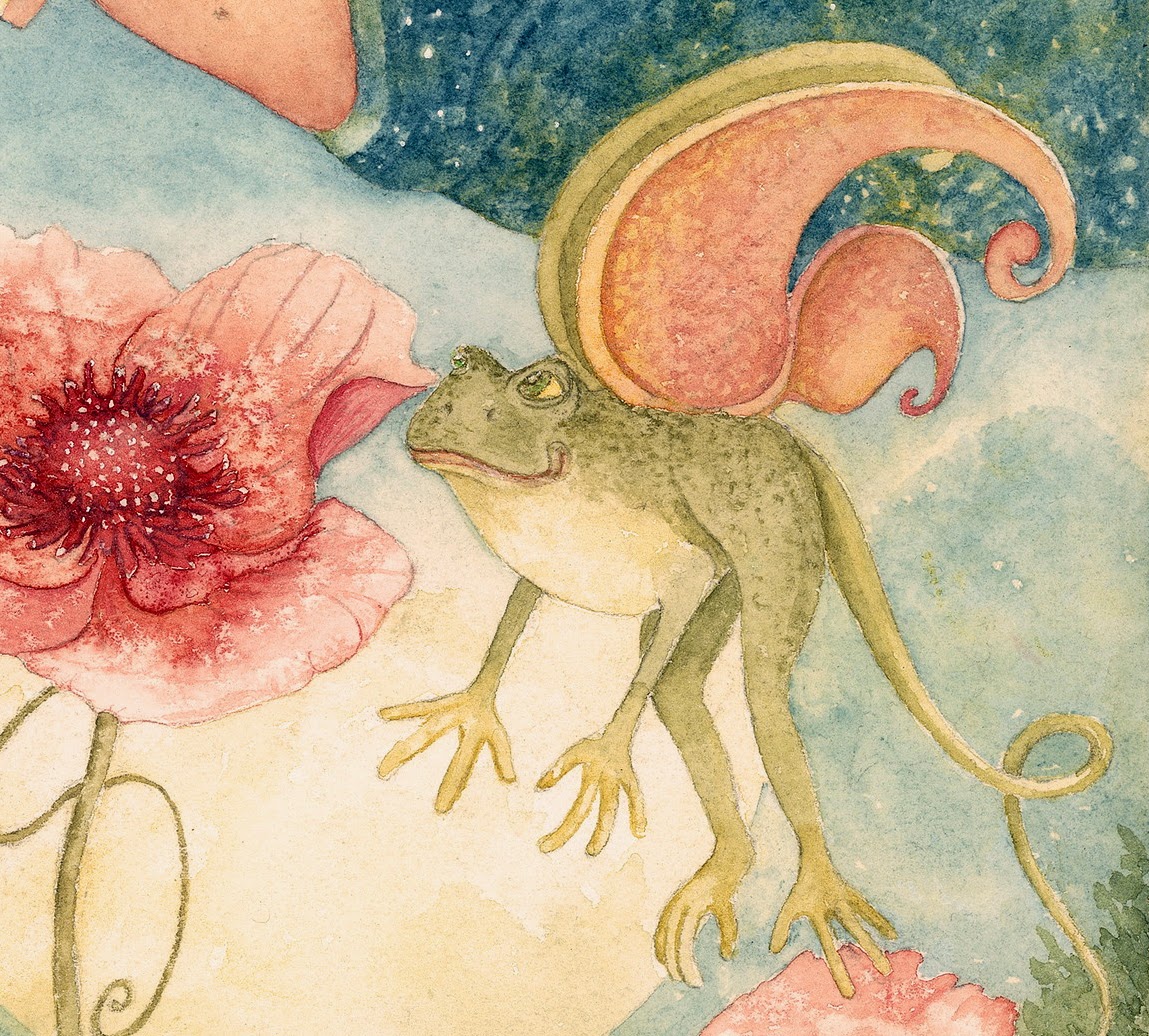 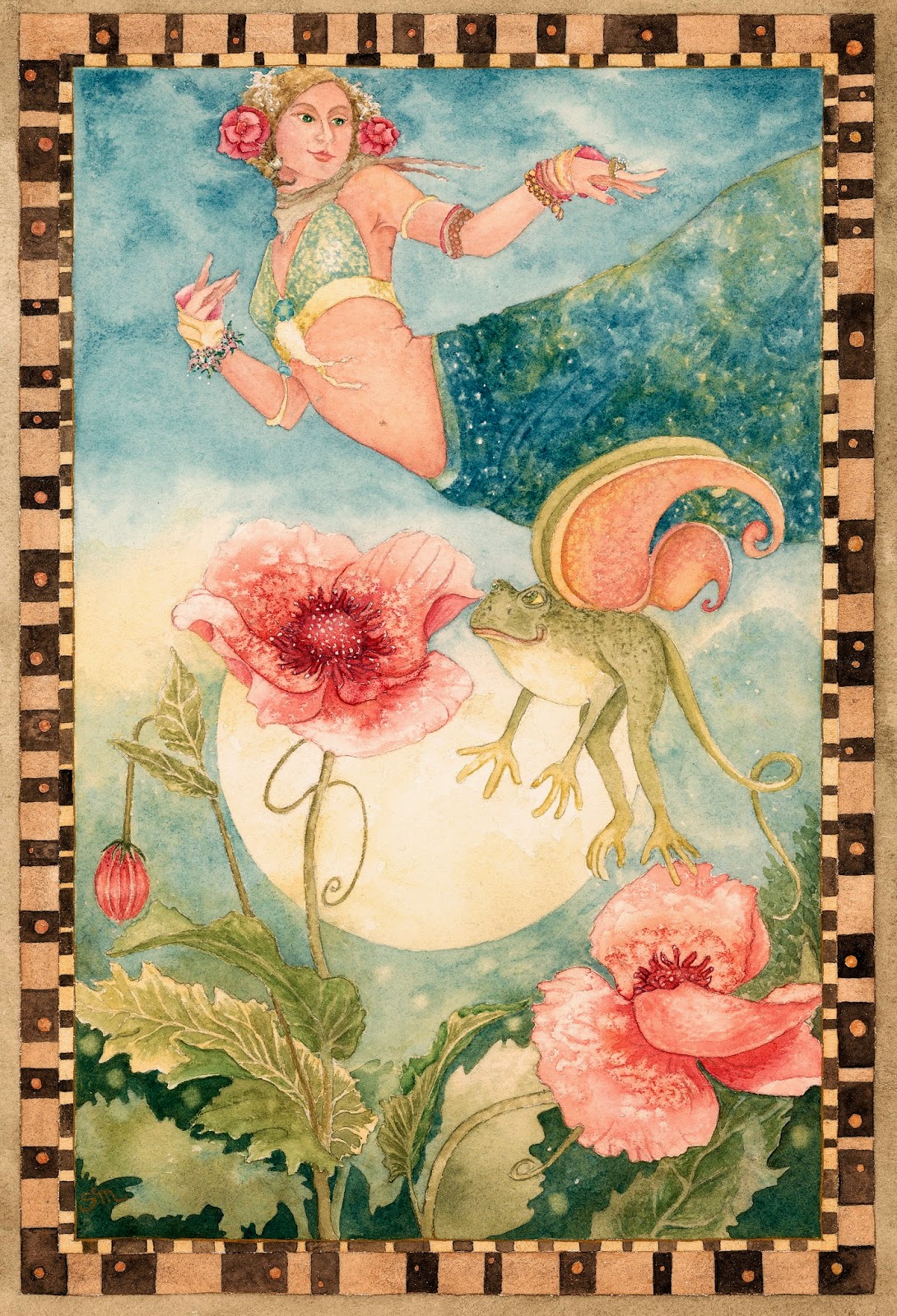 'Energy lives also in trees, flowers, and bushes. Sit near them. Let their aura merge with yours. When you inhale, feel the energy flow in. Do not be afraid to use it. Nature abounds in energy. You cannot deplete it. Only cutting, burning, and bulldozing can do that. Turn trees to paper, asphalt the fields, burn bushes, and you have wasted their energy. But draw that energy into you, make it part of your spirit, and you have added to the greater whole.'

~ conversation in Psychonavigation
by John Perkins, 1990

Happy Springtime
♡
Thanks to my friends Marja-Leena  and Linda for their continued inspiration in posting amazing photos and artwork of the natural world.