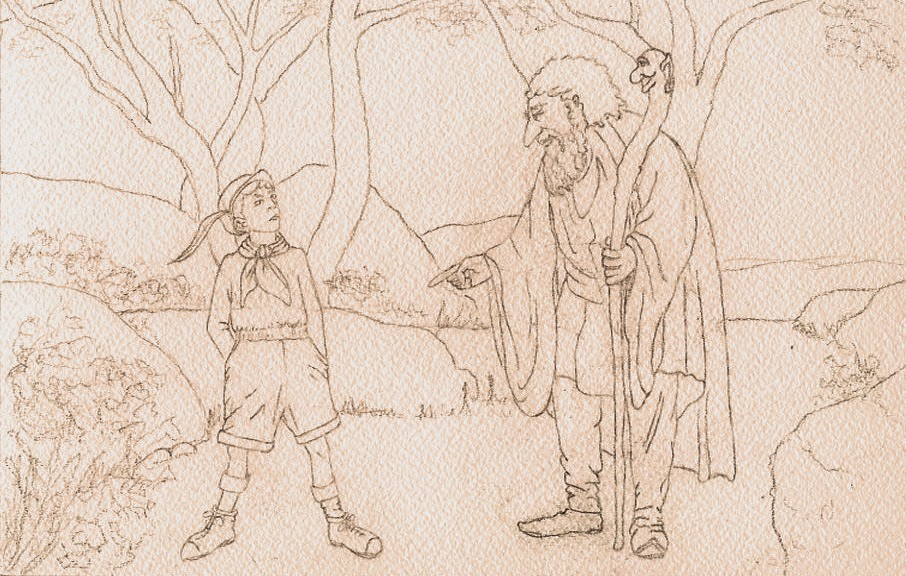 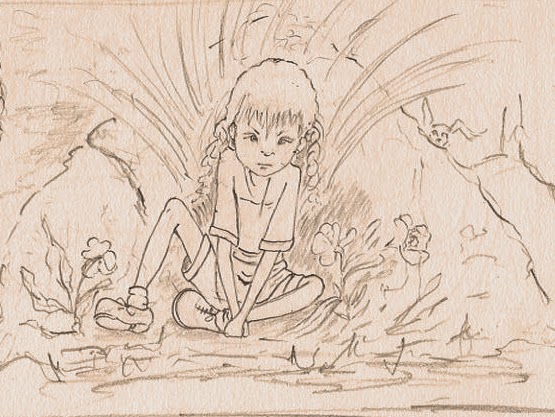 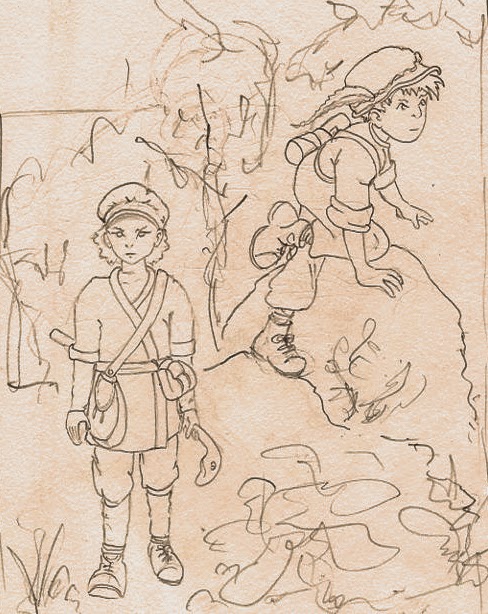 So far as my own work is concerned, you can see I've been doing more sketching than finishing these past few weeks as I try to image(ine) the characters for a story written a number of years ago by the now grown daughter of a friend. It's a challenge, but kind of fun for all that.

In the meantime it keeps getting colder here as we count down to the shortest daylight hours of the year. There's been rain aplenty and cloudy skies too, but happily we've had no snow to spoil our walks in the park. A long stretch of that walk is by a channel in the bay where the woodland rises to a height on the left and the sea is at the bottom of a steep drop to the right. One recent day we'd fed some crows at one of the spots where we drop peanuts for them on our way to the point of land that faces right out to sea. The crows were following when we noticed a flock of chickadees flitting around in the brush to our left. Usually what happens when we see them is I scatter some nuts and wait to let them eat while we keep the greedy crows at bay. This time I still had the food in my hand when a hungry chickadee landed on one of my fingers and took a nut. Before I had time to react the little birds came one after another to take their share of peanuts from my hand. It was the sweetest feeling ever to be that trusted. Now that we know they'll often come if we wait a bit, feeding them has become one of those little events to treasure.

I know this is a small thing, perhaps even an ordinary occurrence. If so, I hope a connection with the wild world is something routine in your life. For me, it's an example (one I can hold in my hand) of real magic in the world. It's funny to think that until the final triumph of the scientific revolution at the start of the eighteenth century, magic and a great many things connected with it were treated as everyday matters in Western cultures. The sense of life, mind, and meaning in the cosmos is something that we as individuals put into the mix in the process of constructing our worlds.

Experiencing the world as a community of existent thinking beings leads us to understand that every living thing has an equal part to play in the great web of life. The opposite is to experience the world as a dead and mindless mass of raw material that has only whatever meaning and value certain human beings choose to give it. Which of those behaviors is more useful in the present predicament of industrial society is another point worth considering.

For something extra (and finished in this case) I did find a great short video you might enjoy watching as much as I did: 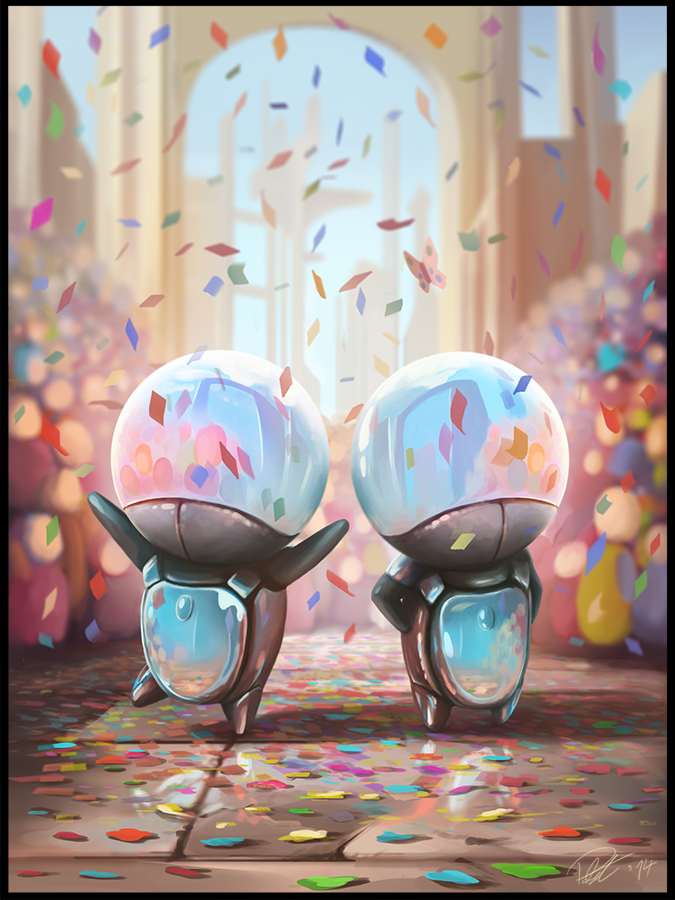 One of my favorite new acquaintances at Deviant Art is Patriartis, a digital artist from Finland. While Patrik's art is uniquely attractive in many ways, what has made him a delight for me to follow is his Journey series wherein we get to accompany the twin aliens, Linus and Linnéa, on their adventure of discovery around an equally alien world. The written exploits are compelling and just mysterious enough to keep the story moving. If you look closely at the pictures you can (occasionally) just about see the brightly attentive eyes of the two protagonists. Next you can read the paragraph describing the opening picture with two more samples to follow.

They had walked the main street countless times before, although never so confident and proud as on this day. Every event in their young lives had built up to this moment, and at the end of the path awaited a new chapter in their lives; a small but magnificent spacecraft that would take them away from the planet and into history. They were proud to be twins. Proud to be chosen.

This is a prequel to the Journey series. A rare opportunity to see Linus and Linnéa in spacesuits which aren't covered in dirt and/or scratches.. 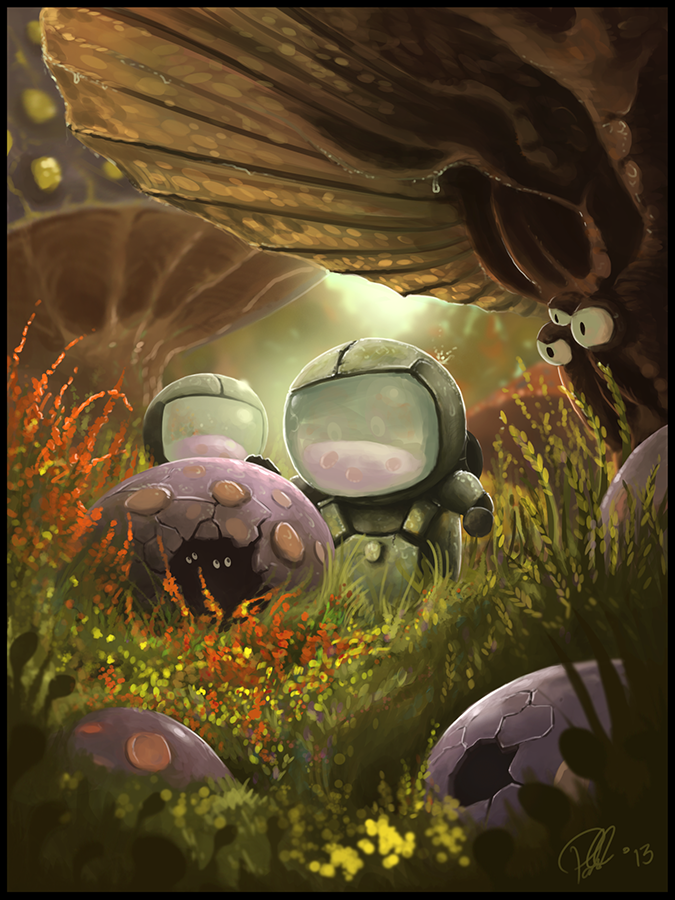 By now, the damp jungle was nothing more than a fresh memory as the trees and berry-bushes started to become replaced by even stranger plants. These plants, however, seemed more watchful than the others, even to the point of Linus convincing his travel companion that leaving them alone without further examination would probably be the best course of action. Not only did the plants look largely suspicious, argued Linus, but angering or saddening them would be especially unfortunate considering their excellent shelter-properties in case of a nasty bit of hard rain, sour rain, or whatever-kind-of-rain this world was accustomed to. However, the travellers' curiosity was quickly redirected as they noticed purple egg-shaped things sticking out of the grass... 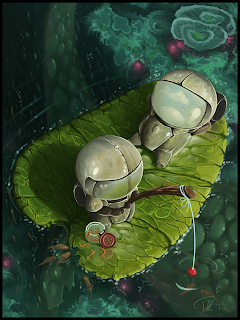 Much to their delight, the dreaded rain was postponed. However, Linus knew quite well that these twists were simply temporary; nature was probably far to busy elsewhere to suddenly change its mind in such small matters. Needless to say there was only a matter of time, and so they had to produce some food before the rain made it impossible later on. Although they had procured plenty of nutrients from their crashed vessel to store in their spacebags, Linus seconded his travel companion's suggestion that they should be kept for a rainy day, quite literally. Being the masterprocurer of fish, as Linus convincingly illustrated through eager arm-movements, he explained how they would find excellent food without much effort in a nearby lake. His companion tried to oppose on account of the lake seeming a bit cryptic, even for this world. Nevertheless, resistance was futile as Linus had already found highly motivated baitworms for the task at hand. What could possibly go wrong?

The story so far can be viewed by going to The Journey gallery and opening the pictures in order from bottom right to top left. Along with a number of others at dA I'm always looking forward to the next episode of this fine adventure. Patrik doesn't have a web page but can also be reached at his Facebook page under pbjorkstromillustration
♡
Posted by susan at 11:06 AM 12 comments: 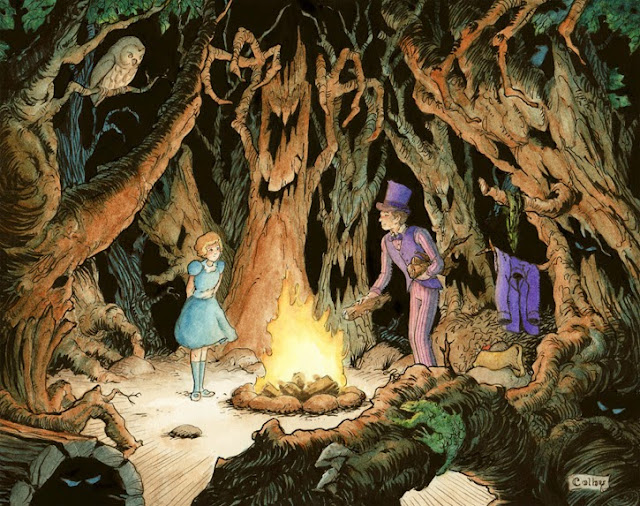 This painting is from a drawing I did for a proposed Wizard of Oz prequel. My main objective was to illustrate the drawing in a style similar to Arthur Rackham. It was a good learning experiment. 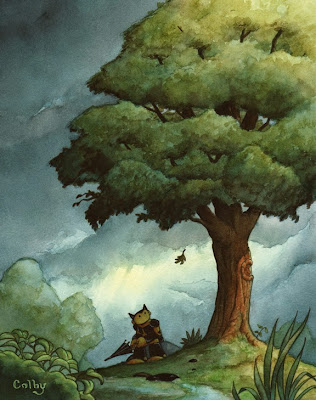 In the past week I've realized it's come to a choice between illustrating blog posts and spending some time working on a special project that's caught my interest. While I could, instead, post photographs of what I see outside, I'm no photographer and, besides that, what's outside is late autumn in Halifax with its overcast grey skies. It's been mostly raining here for weeks and the leaves, rather than blowing off the trees and bushes, are actually dripping off them. 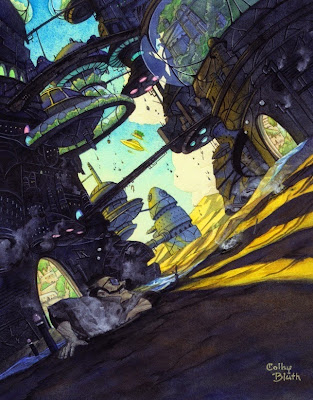 You may recall I re-joined Deviant Art last summer and, oddly enough, within a week I'd been invited to be a moderator of one of their super groups (that's like a gallery with lots of members inside the larger website). While I was nervous about moderator responsibilities at first it's turned out to be easier than I'd expected and I've been introduced to some very talented artists whose work I might not have seen otherwise. Our group specializes in watercolors and the very talented Colby Bluth is one of our members. He kindly agreed when I asked to show you some of his work. 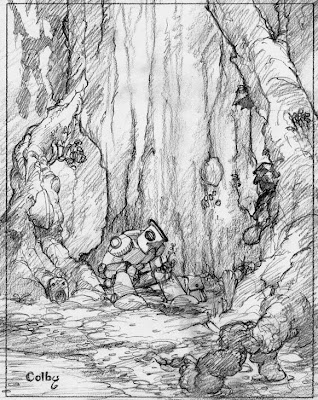 Colby is a professional artist who lives in Los Angeles:

Hello, and thanks for checking out my artwork. I’m an artist that’s been working in the fields of illustration and animation for over 15 years.

Some of the projects I’ve worked on include Fox’s Anastasia, Disney’s The Tigger Movie, and the Adam Sandler movie Bedtime Stories. I’ve also done flash animation and illustration for the Long Beach Aquarium of the Pacific since 2001.

Feel free to contact me for your project or to commission an art piece. 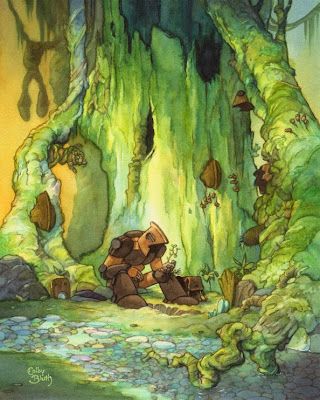 While Colby doesn't paint only in watercolors, it's those I tend to like the most, probably because of my own long-term interest in the medium and the fact he's also very accomplished at fantasy painting in a turn of the century style I've long admired. He's also been very generous in presenting his unfinished work so that we can see examples of his process.

Lastly, I was delighted (and a little envious) when I found some animated 2D cartoons made entirely by Colby Bluth in the old-fashioned Disney and Miazaki style. Here's a sample you may enjoy too:


You can see more of his work here and here.

I'll be back soon. 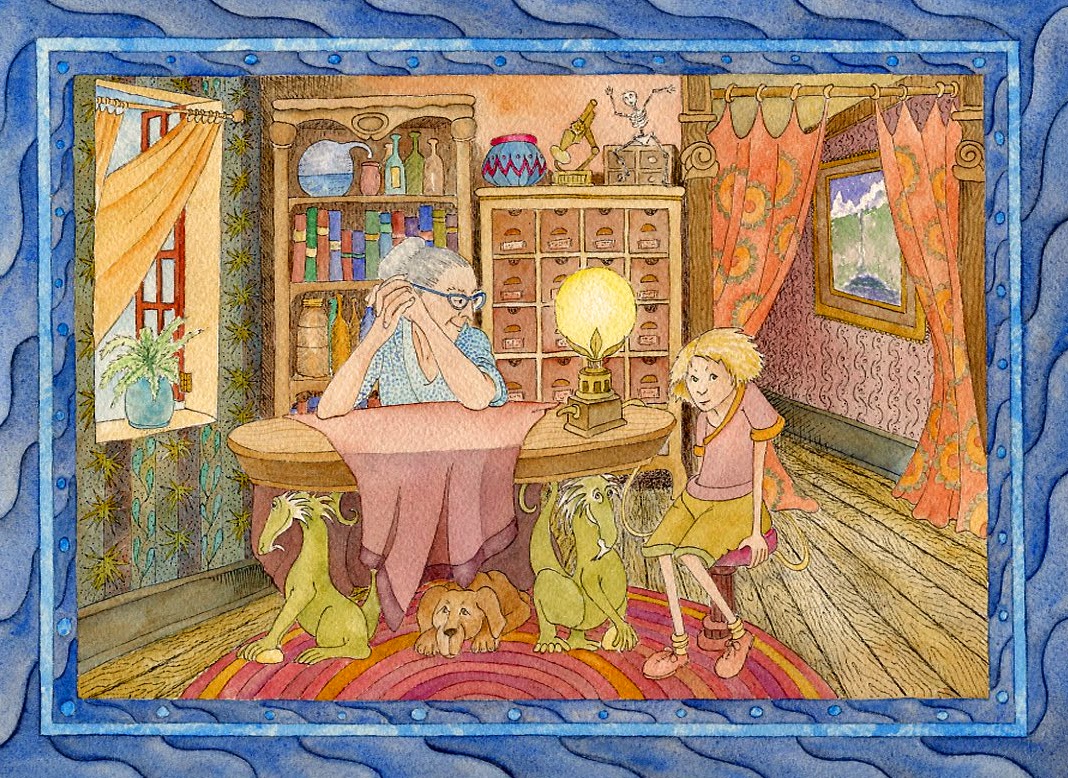 According to a report by Oxfam which warned that inequality between rich and poor is spiraling out of control, the number of dollar billionaires in the world has more than doubled to 1,645 since the financial crisis of 2008.

Despite the austerity affecting ordinary people around the globe in the wake of the recession, the richest 85 billionaires saw their fortunes increase by a total of around $240bn over the past year. Research earlier this year found these 85 people had access to wealth equal to that of half the world’s population.

If the world’s billionaires were taxed at a rate of just 1.5% on their wealth over $1bn, it would raise $74bn a year - enough to get every child into school and deliver health services in all of the world’s poorest countries. The report is titled, Even it Up: Time To End Extreme Inequality.

Oxfam’s chief executive Mark Goldring said: “Inequality is one of the defining problems of our age. In a world where hundreds of millions of people are living without access to clean drinking water and without enough food to feed their families, a small elite have more money than they could spend in several lifetimes. The consequences of extreme inequality are harmful to everyone. It robs millions of people of better life chances and fuels crime, corruption and even violent conflict. Put simply, it is holding back efforts to end poverty."

Oxfam challenged governments to follow a seven-point plan to rein in inequality:

1. Clamp down on tax dodging.
2. Invest in universal free healthcare and education.
3. Introduce equal pay legislation.
4. Agree to a global goal to tackle inequality.
5. Introduce minimum wages and move towards a living wage for all workers.
6. Shift the burden of taxation from labor and consumption towards capital and wealth.
7. Provide adequate safety nets for the poor, including a minimum income guarantee.

While I prefer not to be skeptical..
Do you think we have leaders capable of introducing these ideas?

Meanwhile I hope you like the new illustration. Any suggestions for captions or story ideas are welcome.
♡