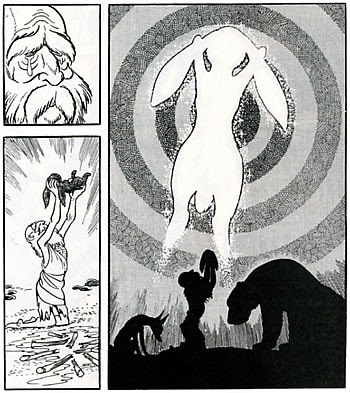 After a couple of hours of work on one of my own drawings I spent some time recently re-reading favorite parts of Osamu Tezuka's 'Buddha' series. I don't know if you're familiar with manga but Tezuka, who died in 1989 at age 60, is generally recognized in Japan as the grand master of the medium.  The first experience I had of his work was when I read the 8 volume, 3000+ page story of the life and times of Gautama the Buddha.

From the start, Tezuka's tone and approach is varied. The first book opens with large, beautifully detailed landscapes, followed by a nine page episode  -  a story told only in pictures of a starving wise man who collapses in the snow. A bear, a fox, and a rabbit all try to help him by gathering wood and starting a fire but there is no food to cook. The rabbit sacrifices himself by jumping into the fire. In tears, the old man lifts up the charred corpse and we see the rabbit's spirit form soaring into the night sky. It's a very powerful and moving narrative to say the least. On the very next page we meet the old brahmin who has told the story about the Buddha's last birth and instructs his disciples to join the search for 'the great one'. In one panel he says, ' I feel a strong pull in this direction'; in the next we see a watch, a snack, and a pack of cigarettes being sucked from under his billowing cloak. 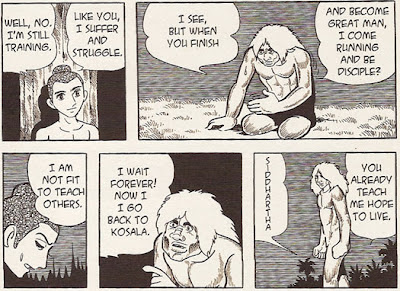 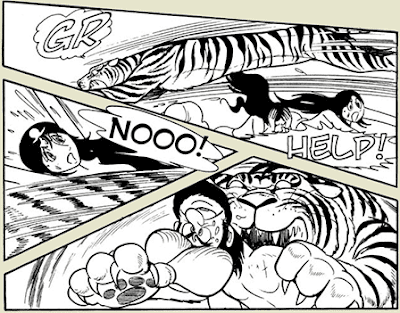 In another episode a character was confronted by his haunted conscience, seeing a vision of Buddha speaking to him but, since it was a vision, he wakes to discover he’s been talking to his horse all along. Characters from Tezuka’s other works show up not infrequently and even Tezuka himself appears in cameos, taking the place of a character for a single panel.

These odd juxtapositions of reverence and irreverence continue throughout the series. Instead of writing a biography of Prince Siddartha and his quest for enlightenment, Tezuka decided to cover a broad sweep of history that includes the Buddha but doesn't always focus on him in particular. In the first volume the prince doesn't appear until half way through and then only as an infant. Instead, we meet the first of a wide variety of characters, some historic and some purely made up, whose stories are interwoven with a semi-fictional account of the life story of the central figure of one of the world's great religions.Tezuka clearly thinks very highly of the Buddha and his teachings but his brilliance lies in showing us what trials a fairly ordinary man of his time (or ours) was up against when it comes to finding the deepest spiritual connection. Throughout the series there are constant humorous episodes - this is a comic, after all, and not a religious polemic. The books are filled with jokes, antics, and general nuttiness besides the tragic results of normal human behavior. A main character might die, followers lose faith, or enemies be redeemed. There's just no knowing and that's what kept me fascinated. 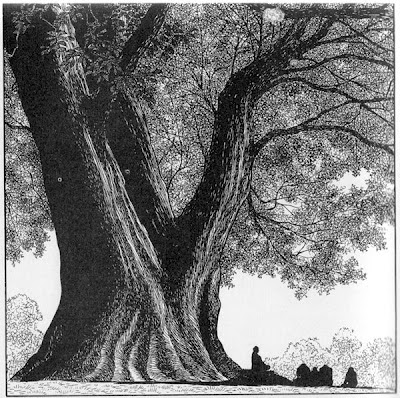 As an artist I was awestruck by the gorgeous detail of Tezuka's magnificent pen and ink drawn landscapes. It took me only a little while to accept his cartoon characters as real personalities; it took Tezuka a decade (1974-1984) to complete the project. Nowhere have I read that he was a Buddhist but he was born in 1928 in Osaka and experienced the fire bombing of the city near the end of WWII. He trained as a doctor but devoted himself to manga as a means to help convince people to care for the world. 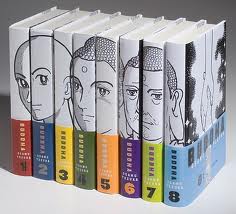 'Buddha' was just one of many books and serials penned by Osamu Tezuka. He's reputed to have created more than 700 manga series, 170,000 pages of drawings, and another 200,000 anime storyboards and scripts. Japanese manga artists call him "Manga-no-kami sama" [the god of manga].

If you're interested in reading 'Buddha' or looking at the art without purchasing the books first you can find it online here. Even if there were no others, this would have been sufficient for a lifetime's work.

Just a little thing that made me laugh this morning.
I hope it has the same effect on you. 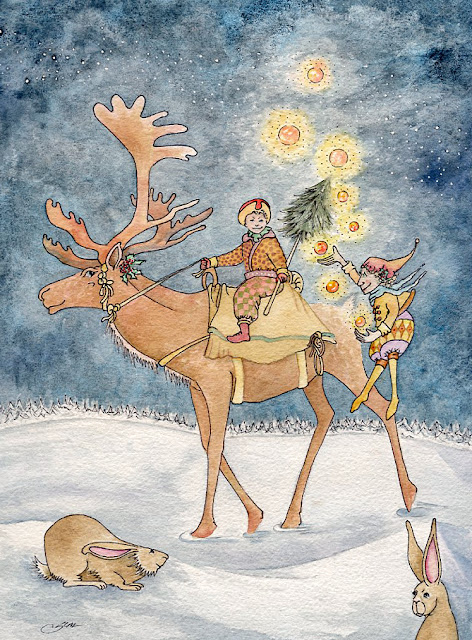 Here we are having Victoria Day around here with Memorial Day in the US coming along next and how did I spend some time last week? You'd think I'd already have had enough of winter to last me for a while but I guess not. The two holidays announce the beginning of summer in North America but I was curious about some blues and blacks in my watercolor paint supply and decided to see how this drawing from last autumn would look in color. Just in case it's already a bit warmer than usual where you are perhaps it will bring some memories of frosty evenings. I know I have at least one friend among you who prefers the long dark.

There are a few things I'll definitely miss about living in this place if we ever do find a better one. That's not entirely certain since every building we've looked at is still in Halifax rather than Paris or Rome but we do what we can. Yesterday the city held a Victoria Day 42 km marathon race in honor of everybody who suffered shin splints, twisted ankles, and chest pain in last year's run. I thought it was very nice the more experienced athletes allowed Queen Victoria to win - then again, this is Canada and there is protocol to consider. She looked so sweet as she puffed along at the head of the crowd outside our windows. Her little diamond tiara was a bit askew but her young pages had managed to keep the train of her gown out of the dust and it was a treat to see the courtiers running backwards as they fanned her Majesty's glowing* royal brow.

The next thing to look forward to will be the annual parade of the Stanley Cup. Last year we saw three open trucks led by six mounties, all followed by a man in a hockey puck suit and a bagpiper. Big doings.

Have you seen any strange things either passing by or in passing recently? 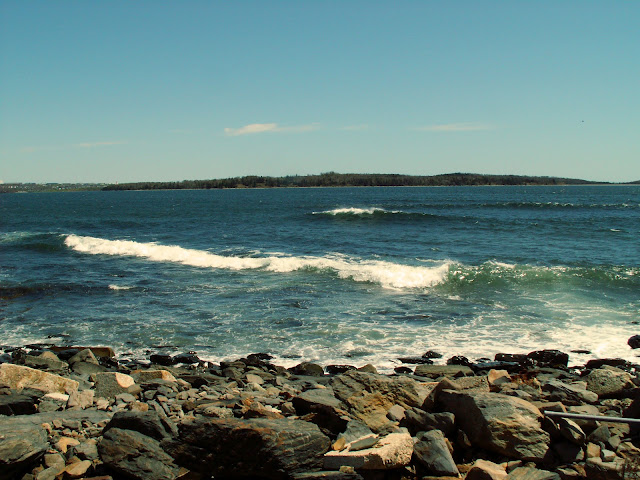 Sometimes the best thing to do is to sit down in front of a large body of water and stay there for a while. This is a picture I took in our park just a few days ago on a breezy sunny day but I wish I could let you hear the waves and the rattling sound the rocks make as the water breaks and pulls away from the shore. On really good days the waves are even bigger than these but since I hardly ever carry my camera all I can do is sit and watch.

Do you have a favorite place? 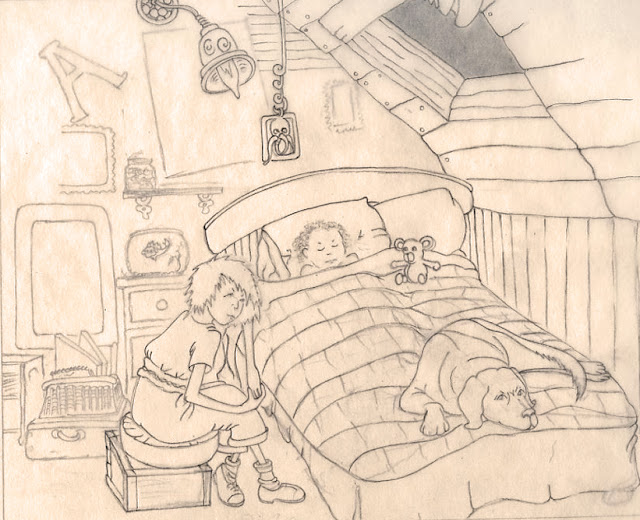 No, I'm still not going to tell you the plot but you can see things are still developing. One of these fine days I may make it to whatever is that magic number of drawings that allows me to write it down properly and perhaps turning these ideas into real colored illustrations.

Meanwhile, I re-read a book I loved the first time and all the more the second. It was 'Confessions of An Ugly Stepsister' by Gregory Maguire. This story of Iris and Ruth, their complex mother Margarethe, and their stepsister Clara of the 'afflicted eternal beauty' is filled with wonderfully shaded characterizations that never fall into that good/evil dichotomy of the Bothers Grimm. It is an astonishing and unusual re-imagining of the Cinderella fairytale, focusing on one of the stepsisters, Iris, who is neither ugly nor wicked. The action takes place in 17th century Holland, and the novel involves not only the Cinderella story, but a painter's imagination, and the tulip trade that resulted in the first well known economic collapse caused by speculation.

The best books are always educational.
♡ 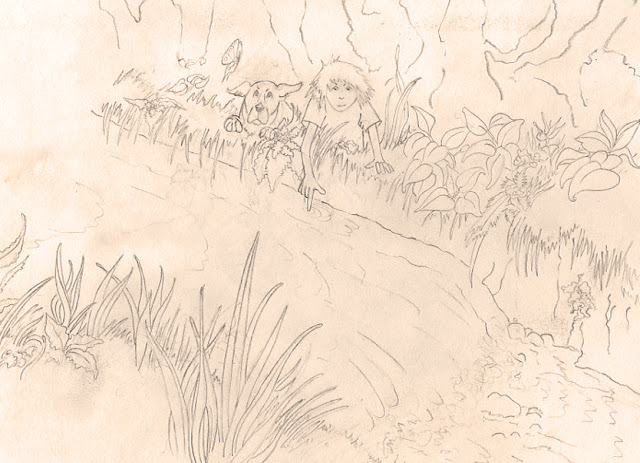 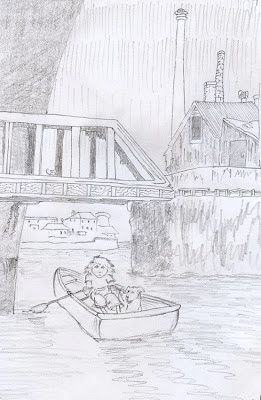 I thought I'd let you know I'm still sketching out drawings that highlight various parts of the story I concocted in the past month or so. What's hard to avoid is transferring them to watercolor paper and getting on with painting them. I'm much more accustomed to that process and its more immediate satisfaction. Instead, I'm continuing to develop different perspectives of the main character and her trusty companion while satisfying my need to paint by following Crow's adventures. It's always nice to have a backup plan, isn't it?

Speaking of backup plans, sending cards to people has been something I've always enjoyed doing but for quite some time I've been having difficulty finding ones I like. I may be overly picky, but a lot of smaller companies who made clever cards have gone out of business entirely while the big greeting card manufacturers lost the thread long ago. After my last failed attempt to find a birthday card I decided to see if there were any online options and discovered Fine Art America. Considering the fact I can't afford to buy a good printer, never mind the inks and peripherals, it seemed worth a try.

I posted a couple of high resolution paintings (a trick in itself), ordered cards of the images, and waited to see just how disappointed I'd be with the results. It turned out I wasn't disappointed at all when they arrived last week. So I've taken the next step in putting a little gallery of images up for sale. The company charges a baseline $3.95 for a card and $12.00 for a print to which I added a small amount if anyone wants to purchase something I've painted. I'd be happy enough if you'd just like to look and tell me what you think of the idea. Being chronically ambivalent about commercial enterprises I feel a bit silly asking. Meanwhile, I'm looking forward to designing my Christmas cards. 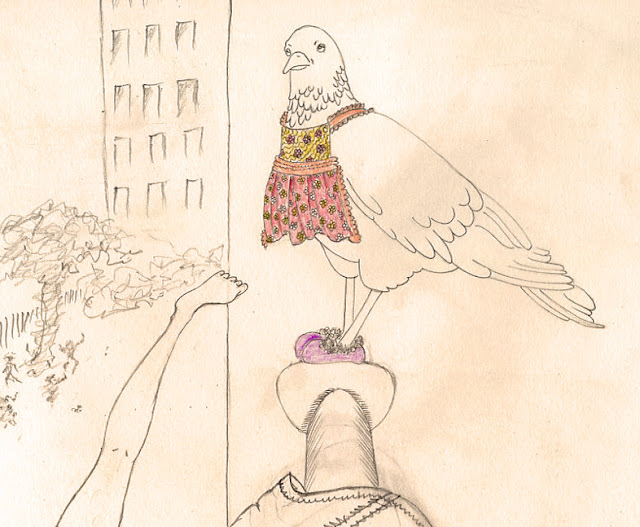 Although we weren't outside to witness the proceedings ourselves this past Sunday afternoon, we got a first person witness account of events that took place outside our once elegant and still enormous apartment building. A disoriented young man who was found wandering on the sidewalk dressed only in a leather jacket and one sock was tackled by the local constabulary. In their valiant attempt to make sure he was carrying no objects dangerous to the general public they had him stand up, bend over, and jump up and down. During these events a crowd of his good natured peers was on hand to take pictures with their cell phones while making ribald jokes.

After our traumatized storyteller had gone we pondered the impossibility of how anyone could make it from their apartment to the elevators and on down through the lobby of this busy enclave without anyone mentioning his sartorial blunder. Having given the matter due thought we arrived at a solution that, although it precludes him living at a higher elevation than the third floor, we feel is the only logical possibility:

When stepping out onto his balcony to breathe the fresh air of a warm spring afternoon he must have inadvertently tripped over a nesting pigeon. In an effort to avoid the delicate fledglings he stumbled and began to topple over the balcony. Meanwhile, the quick thinking pigeon mother grabbed the bottom of his trouser leg to arrest his fall but not being weighty enough to prevent his wingless plummet found herself with only his pants in her brave beak.

That must have been what happened.