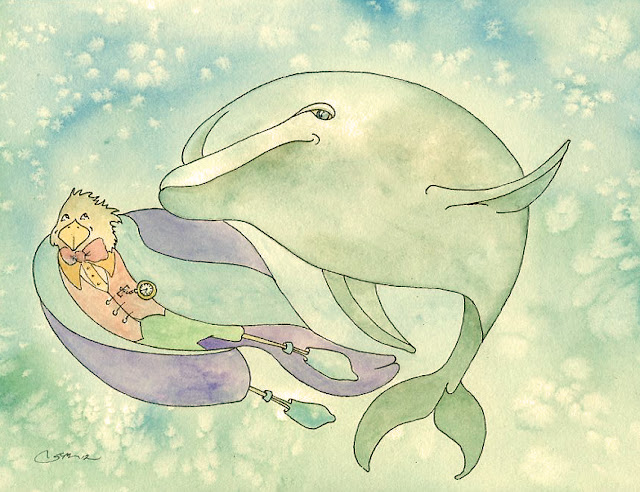 I haven't really gone anywhere, at least no further than usual, but I must admit I've been spending too much time attempting to draw and paint some pictures in the style of someone else entirely. It doesn't matter who in particular as there are a number of watercolor artists whose work I admire, but in the long run all we can do is what we know how to do.. and perhaps try to improve.

Meanwhile, I thought I'd share with you a portrait of Crow enjoying the sea with a friend. Crow himself suggested you might enjoy some memorable quotes by Douglas Adams.

“I love deadlines. I love the whooshing noise they make as they go by.”

“The story so far:
In the beginning the Universe was created.
This has made a lot of people very angry and been widely regarded as a bad move.”

“For instance, on the planet Earth, man had always assumed that he was more intelligent than dolphins because he had achieved so much—the wheel, New York, wars and so on—whilst all the dolphins had ever done was muck about in the water having a good time. But conversely, the dolphins had always believed that they were far more intelligent than man—for precisely the same reasons.”

“The fact that we live at the bottom of a deep gravity well, on the surface of a gas covered planet going around a nuclear fireball 90 million miles away and think this to be normal is obviously some indication of how skewed our perspective tends to be.”

Now I'd better warm up Crow's brandy. He enjoys a swim but hates being wet - obviously it's not just people who are full of contradictions (but don't tell him I told you).

at the edge with Crow 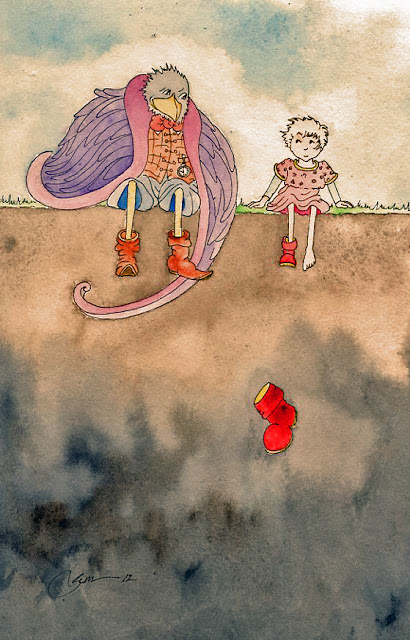 It can be nasty losing your boot down a hole if you don't have someone able to fly down and retrieve it for you.

After looking at too many pictures of the Canadian oil sands projects and reading the reports I decided I'd rather paint a picture of Crow and company than write a post about my feelings.

I'm just left wondering what will happen if everything that can be burned does get burned.

back to the drawing board 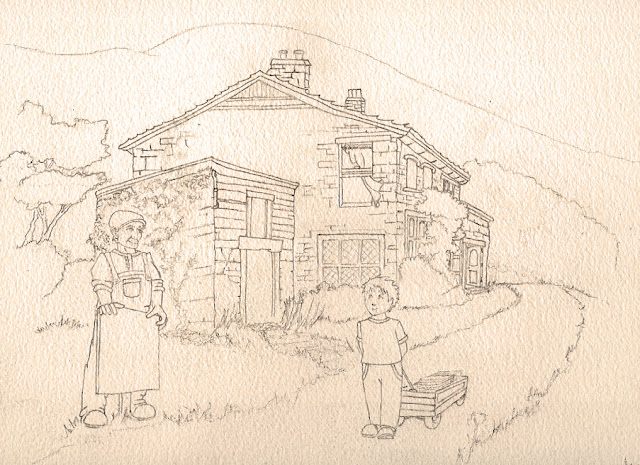 Over the past week or two I've been putting together four drawings for the little story I mentioned having found. One day last week when the rain and wind made going out for a long walk impossible, I decided to transfer this one to watercolor paper and paint it fairly fast so I could gauge how long it might take to turn the four planned illustrations into satisfactory paintings. 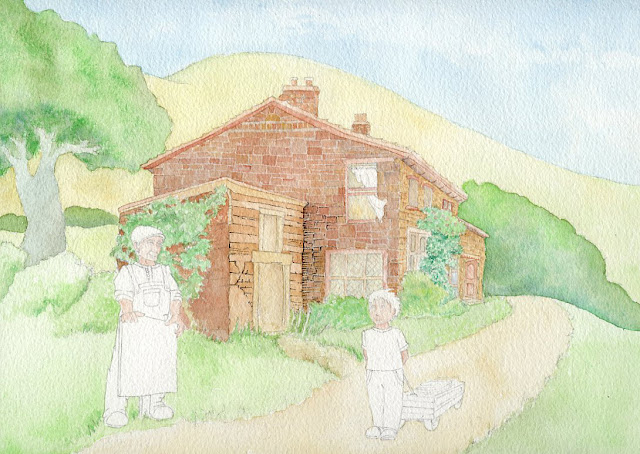 Several hours later I'd gone from the drawing above to this one and the resulting certainty I'd painted and inked my way into a corner. There were parts I still liked a lot - the house, the characters, the idea of the road - but overall it was looking just a little too stark for my liking. Greens are the most amazing colors in nature but are for me the most difficult to paint. The huge background hill also was going to require a different approach. 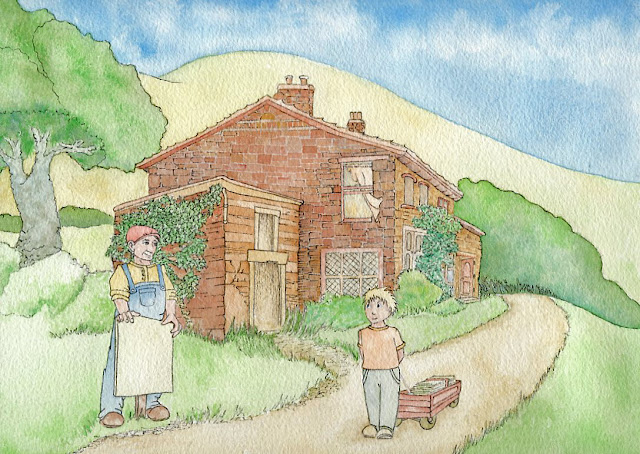 Nevertheless, I'd already gone so far that I decided to finish the painting as doing so would allow me to see what was going to work and what parts would need to be revised. I went back over the entire picture adding colors to intensify the clouds and greenery as well as delineating the two characters. I'd started inking so had to finish at least enough of that to make the picture coherent.

I've discovered (and not for the first time) is that for me making something magical takes time as well as fearlessness. I have to allow myself to make mistakes  and  be willing to start over from a blank page. With so many things in life we don't have that luxury but at least we could work on the theory the best course of action is to begin again from wherever we are right now - considering lessons learned of course.

What makes life magical for you?
♡