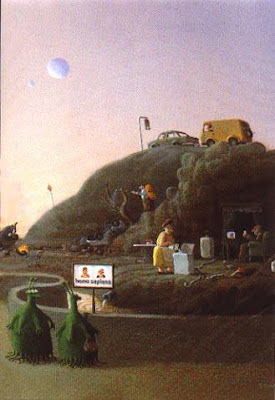 On the front page of USA Today there's a headline stating that Americans drove 30 billion miles less than usual between November of last year and the end of April. That sounded pretty good until I started reading the article where it stated that 30 billion miles is only 1% of average mileage for US drivers. Now that's scary. What makes it all so much worse is that for the last 50 years everything has been set up in such a way that most people have no choice about driving if they want to keep their jobs so they can afford to drive their cars to the stores where they buy stuff that has been driven, flown, shipped and driven some more from goodness knows where.

Have I ever mentioned I love reading what is called 'hard' science fiction? Essentially, they're books written by science professionals who I presume have graduate students and assistants who do all their science work while these guys head off in flights of intellectual fancy about what human beings might get to do in the universe at large if we ever get through this difficult 'Age of Waste'.

I've just re-read Iain M. Bank's 'The Algebraist' in which one of his assumptions is that a particular alien civilization dropped by Earth 8000 years ago and made off with a sample group of the populace, raised them on planets already inhabited by other races and introduced them to the larger galactic community. They became ahumans (advanced) so when the rest of humanity, or rhumans, eventually figured out not only how to leave the gravity wells but to travel at light speeds they found a galactic society already used to people.

It's never a bad thing to remember that what we call reality might be very different from what we think we know. We can even change direction once we understand we've taken the wrong road. I found a video today called 'The Story of Stuff' which is nearly 20 minutes long but I enjoyed it while doing some paperwork. You might like it too or know somebody who would benefit from its message.

I rather like to imagine there are ahumans out there getting into the adventures people are prone to and learning the lessons that life provides or.. maybe somewhere there's a zoo with 21st Century People as the main exhibit. It could happen :-)
Posted by susan at 8:54 PM