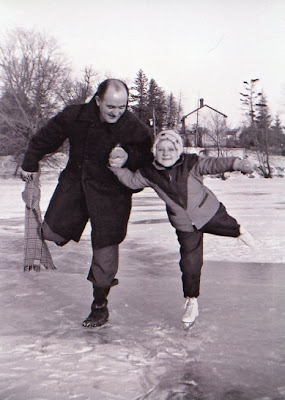 We're stuck for the time being after a dusting of snow here in Portland led to more and more snow. On Friday afternoon we tried to take our little Geo Tracker shopping and even with me sitting in the back seat holding a fruitcake there wasn't enough weight to convince our little Fuchsia to take us up the steep ice covered driveway. Oh well, old habits die hard and, having spent so many other years in rough winter climates, my habit of storing up extra food means we won't go hungry. Now freezing rain is working on adding extra ice to the inches of snow that fell yesterday so I'm hoping the power doesn't fail.

This is a picture of me and my Dad taken during our first winter in Canada in the early 50's. None of us had learned to skate yet but he and my mother ventured out onto the ice so they'd be there to catch me when I fell down - an inevitable first consequence of having blades on the bottom of your shoes. I always miss my parents most particularly at Christmas but I've been thinking lately of how much things have changed in general since that faraway time.

There were no superhighways, suburbs, shopping malls or agribusinesses. People lived either in the city or the country with not much in between but a few small towns. It wasn't much different here in the US and nowadays Canada has all the same stuff as we have with the major exception being national health care. I know it will sound incredibly antiquated and perhaps even unbelievable but our first house was small and tightly built with a coal stove that provided heat. We did have a gas stove, running water and a gas water heater but there was also a well with a hand pump only a few feet from the back door. When it snowed dozens of neighbors went out with shovels to clear the cars and the private road that led to the houses. The cars were mechanically simple enough that people could repair most glitches on their own. Televisions were a rarity so radio and newspapers provided news and a softer version of entertainment.

I think the biggest difference is that there was a general sense of community. Needs were simpler and people were willing to share what they had whether it was help with building a new room, care of a sick person, an extra place at the dinner table or whatever was needed. There were always parties and get togethers with lots of laughter, stories about even older days and talk about politics and work.

Will we be able to recreate a simpler lifestyle again if we must? Next time we can drive the miles from here to the market I plan on buying a snow shovel I can lend to the first strong young neighbor I meet. Meanwhile, I remember my Dad and the woman holding the camera in that sweet time.. my Mother. 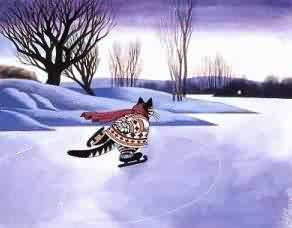 Happy Christmas everyone with much love. I wish you Peace and a slice of warm apple pie to greet you when you return home.
Posted by susan at 1:36 PM