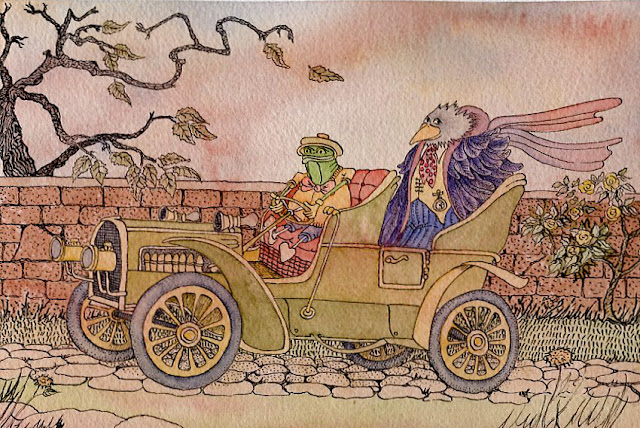 Have refined the postcard sent by Crow a few days ago into something that could be from 1908 when Kenneth Grahame wrote 'The Wind in the Willows'. It's funny to think that there were only a handful of cars on the roads then and no highways at all. The west was industrializing and people were leaving the countryside in droves to get jobs in factories. It would be true to say life for most people wasn't as bucolic as appears in the Golden Age stories but if you were middle class, as Grahame was, then the countryside was pristine and as beautiful as the story implies.

A couple of nights ago I looked up my favourite chapter in the book to see if I could post a link. It's called 'The Piper at the Gates of Dawn' if you'd like to read it. A baby otter has gone missing from home and as his father waits by the riverbank with fading hopes for his return, Mole and Rat decide to search.

Now I'm off to bed a little earlier than usual. We both have the flu and I'm looking forward to Crow's homecoming so he can ply me with brandy for once. I'll be back when health and inspiration return.