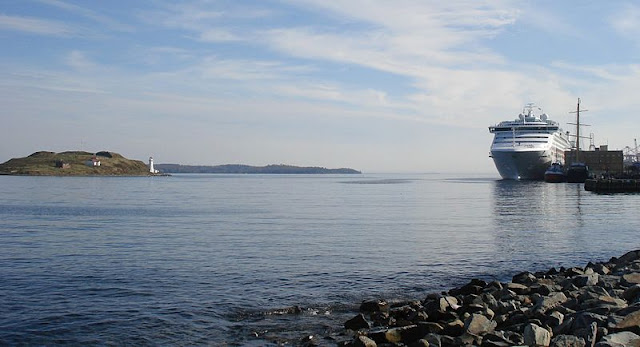 Boy, it was hot around here the past few days with temperatures that must have been close to 80. There's a line of enormous cruise ships parked at the pier making me wonder who these days has the money to ride around on them? It's the Season in Halifax and if the sparkle from the water isn't enough to dazzle your eyes then the flashing diamonds of promenading matrons will do he job. Many of the tourists here for summer holidays find walking not to their liking but summer provides several choices for getting around town other than hiring a limo, hailing a taxi, or waiting an interminable amount of time for a bus. Here's a picture of one of them (taken by a news service) across the water from George's Island. There are many stories about that little place but this one isn't about that. 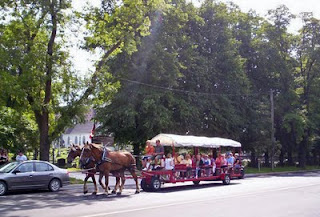 The horse drawn wagons travel the city streets at the stately pace of a strolling Clydesdale. I love horses and many times when I hear the gentle clopping and tinkling bells I look out the window to see them pass. It's also not unusual to see a long line of cars forced into a slow moving parade behind.

Another choice for those who prefer spending their time at outdoor bars and cafes or meandering along the harbor piers rather than hiking up and down hills is one of the big pinks. Retired from duty in London, double decker buses ferry weary tourists around the major historical sites of the city. I wonder why everybody seems to prefer the top deck? 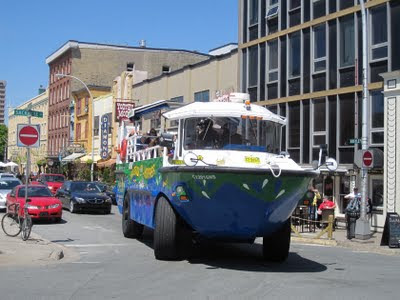 Of course there are the boats that will take people out for harbor tours or even whale watching but that's a different thing. When you're planning to travel across broad stretches of water it's kind of handy to have a boat unless one is an exceptionally strong swimmer.

There is one means of transport seen around summertime Halifax that includes both city and sea and that's the Harbour Hopper. It can be quite disconcerting to see something that looks like a cross between a dump truck and a tugboat driving around the city streets and I must say that the passengers do tend to look a bit silly perched up in the back as it lumbers along. Nevertheless, I may have to ride on it one of these days even if I do have to wear a big hat and dark glasses so none of the other locals will recognize me. You see the Hopper is an amphibious vehicle that dives down a steep ramp into the water. It kind of looks like fun: 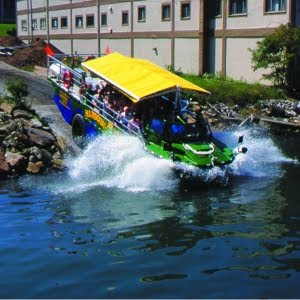 It's a bit strange living in a city that appeared to be fairly normal up until 2 weeks ago that has turned into a fun park for the infirm. I think I'll keep on walking.