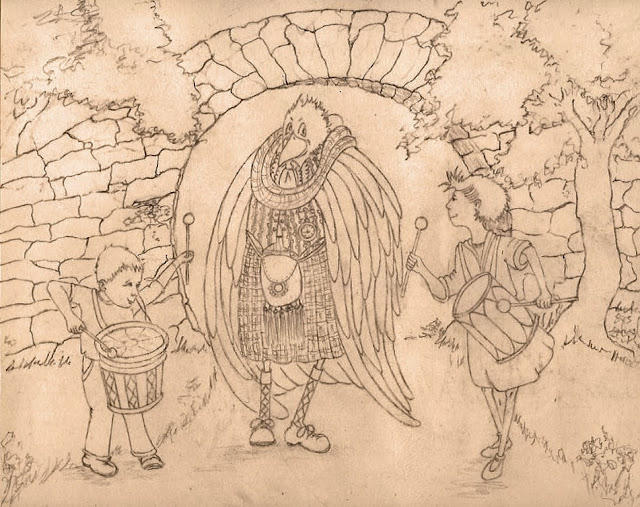 All this and much more did I learn about kilts and Scottish history as Crow sipped a wee dram of an old single malt whisky from the Isles of Islay on a rainy Canada Day. We see a lot of kilts here in Nova Scotia at this time of the year but he was reminiscing about older times than ours. In centuries past he spent a long time in the Highlands with the Glengarry MacDonnell Clan, who still remember him in their crest and motto - The Rock of the Raven. As you well know, Crow still rocks.

It was fascinating to learn that there were no clan tartans as we know them now until the middle and late 1800s. Prior to that they were woven on standing looms of yarns plucked from goats and dyed with whatever natural colors could be found in an area. Only worn by people from the far north of Scotland, who recognized one another by the particulars of weave and color in their tartans, they became popular around the same time that Queen Victoria bought her castle in Balmoral. While her new holiday home was being rebuilt she gifted already rich landowners the crofts and small-holdings of many Highlanders. That's how it happened that so many Scots came to live in North America and the reason why this province has its name.

Anyway, it was too wet the other day to watch a parade so in between fits of laughter at Crow's perfect brogue I started a new picture of him with some friends. With any luck it will eventually become a half decent colored picture. We'll see what develops.

Meanwhile, if I hear this guy is planning a visit to Halifax for next year's parade I will definitely go whether it's raining or not. I think all the pipe bands should have instruments like his:

Happy celebrations wherever you are.
♡

* Thanks to Robert MacDonald, Kiltmaker, Vancouver BC
Posted by susan at 8:06 PM