stations along the way 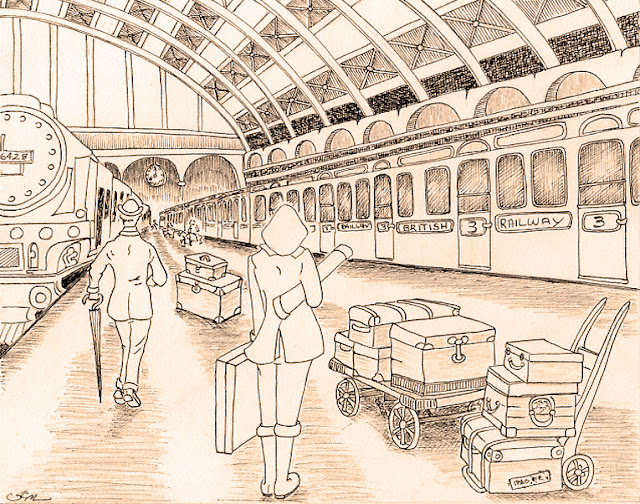 While there may be some things I can draw a bit better than others I'm not sure architecture is among them. Still, among my favorite memories of living in England are the great railway stations of London. Paddington, King's Cross, St Pancras, Euston, Charing Cross, Victoria,  Liverpool Street, and Waterloo are names and places to remember for their names alone, never mind their grandeur. Sometimes I'd visit them just to enjoy the atmosphere - cavernous sheds, seemingly endless platforms, and always lots of interesting characters. Other times, the best ones, were the days when I had a ticket and a place to visit somewhere along one of the lines.

Here's a story told by Terry Jones about something that happened to Douglas Adams at a large railway station around the time I lived there:

Early for a train, Douglas bought The Guardian, a cup of coffee and a packet of biscuits, and sat down at a table, putting the folded newspaper down so he could do the crossword. The packet of biscuits was in the middle of the table.

There was another man already sitting at the table and this man now leant calmly across, tore open the packet of biscuits and ate one. Douglas said he went into a sort of state of shock, but — determined not to show any reaction — he equally calmly leant forward and took the second biscuit. A few minutes later, the man took the third and ate it. Douglas then took the fourth and tried his best not to glare at the man.

The man then stood up and wandered off as if nothing had happened, at which point Douglas’s train was announced. So he hurriedly finished his coffee and picked up his belongings, only to find his packet of biscuits under the newspaper.

Somehow, I can't imagine that happening at an airport.. or maybe not anywhere now.
♡
Posted by susan at 1:19 PM