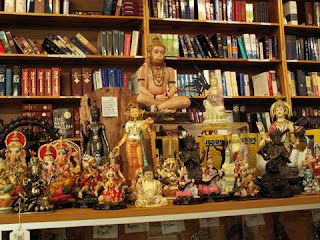 Powell's - a big reason for living in Portland. A clerk once mentioned she's noticed us there every Sunday for years and my husband quipped 'It's cheaper than church'. He was right.


Reading is certainly one of my favorite activities and a book I'm reading at present which I'll recommend even before I've finished it is by Alan Weisman and called World Without Us. Without a doubt we've become a force of nature on this planet, not so much with our numbers, since it's been said we wouldn't fill the Grand Canyon, but with our lifestyle. Where animals take what they need where they can get it and move on, human beings eventually discovered we could manipulate our environment and stay in the same place year round. I won't attempt to reiterate Mr. Weisman's well developed descriptions of the course we've taken to get us to the point where not only our survival as a species but the survival of sentient life on the planet hangs by a thread - and unfortunately not even necessarily a biodegradable one. But please don't think of it as a depressing book since it isn't and that's not his intention; instead it's something to help us envision our options. It's also enjoyable taking the long view and imagining just how fast strip malls and office buildings would deteriorate and disappear. He also tells some extraordinary stories about what the world looked like before we became so numerous and industrious.

Strangely enough yesterday this article about the 3 Gorges Dam in China made me feel just a little bit better in that we as a race may be coming to understand some important points about how we treat the earth. It's remarkable the officials were allowed to say that. Of course, we're a LONG way from getting done what needs to be done but at least we smartass westerners with our opinions about how everybody else should conduct their lives may not be the only ones who have the beginning of an inkling of a clue about what's going wrong. Thanks to the internet we can see people everywhere learning to cope with change.

The one thing that will never make the world a better and happier place for all species is the continuation of war and mayhem. Yes, lots of people die in wars but every single time that happens more people are born afterwards and with that comes more poverty, disease and stress on the environment. Although I haven't finished reading the book yet I'm fairly certain that one conclusion he'll draw is that education, healthcare, and birth control will help us realize the necessity of stabilizing our population. Groups like Heifer may be our best bet for helping the world to become a better place. Or maybe we'll all get spirited away by a Rapture or aliens (as a zoo exhibit) and the planet will recover enough in a few millenia for another curious adventuresome species.
Posted by susan at 2:14 PM