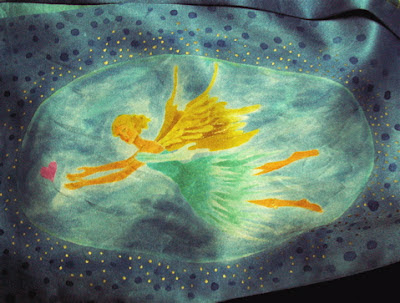 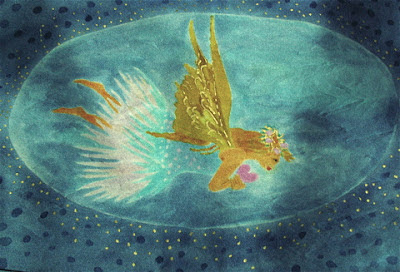 Last year I was asked if I'd be willing to make a scarf for a long-time 'angel friend'. Now I really don't get the whole concept of that kind of friend since as I recall it was some weird market ploy developed by a company to sell base metal pins - but what do I know? My concept of angels isn't one that allows them to be anything other than enormous, magnificent beings totally beyond imagination.. frightening, in fact. Who in their right mind would want to meet the archangel Gabriel? But the lady who asked is a sweet woman who explained her friend was going through a very bad year and that she would dearly love to give her something special.

I must explain that I've never felt good about commissioned work - passed up an offer by Hallmark cards once because I knew I'd never be able to draw to order. I've never offered my services as an illustrator for the same reason but the lady talked me into it and so, in a fit of enthusiasm, I agreed. Right from the start I knew it had been a bad decision but I was stuck with having made the promise. The first scarf was so awful I threw it away after two weeks of salvage work. These are the two 'angels' that eventually looked okay enough and I handed the piece over with the promise to self never to make anything to order again. I've wondered if I'll see a stranger on the street and recognize her simply by the eight foot long silk scarf she's decided to show the world that day. It would be interesting.

Meanwhile it's much easier to work at a full-time job and save the creative side for when the time and inclination arrive.
Posted by susan at 3:20 PM