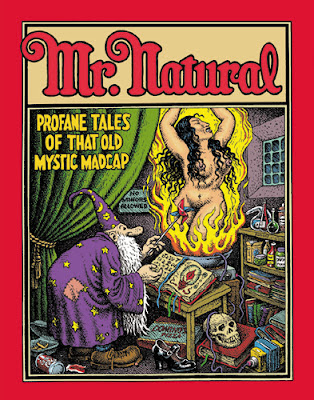 Robert Crumb has always been one of my favorite artists and certainly one of the least appreciated American cultural chroniclers, at least in this country. He gave up on the place years ago and very sensibly moved to the south of France - nice climate, good cheese, great wine and a population who know how to treat a genius.

Of all his characters Mr. Natural is the most profound example of a practitioner of crazy wisdom. His perpetual idiot student is Flakey Foont who knows Mr. Natural has something special going on but is himself far too literal minded to actually get any of it. No matter how many times Mr. Natural whacks Flakey with a stick or shows him how to get along in the world Flakey always misses the point entirely.

When R. Crumb developed Mr. Natural a lot of people I knew were reading the Carlos Castaneda books about the Mexican mystic Don Juan and his attempts to teach Carlos to be a warrior. Carlos was much more successful than Flakey and in actuality probably invented Don Juan after stealing research done by other anthropologists but that's another story. I think Crumb understood that aspect as well as the basic misapprehension by naive 60's youth of just how tricky the tricksters actually are.

I think if more people had paid attention to R. Crumb's assessment of the state of American culture back then instead of writing him off as an eccentric cartoonist we'd be in a lot less trouble now.
Posted by susan at 9:15 PM