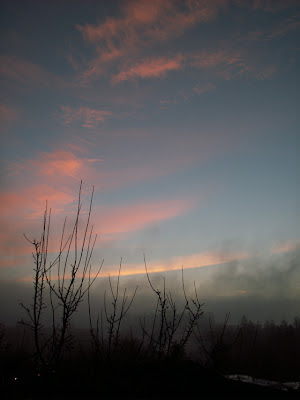 Some days I can't help but make unfavorable comparisons of this little blog I've been playing around with the past couple of months with others I've got into the habit of visiting. My early posts were an attempt to show the best of my artwork done in the past decade and since I work slowly, deliberately and intermittently, the gallery show aspect came and went fast. So what do I dedicate this blogging time towards? I wish I could rant to great effect like Fairlane and his friends at Jones Town but I'm no ranter and worse, unless you get to hear me at work, I'm not very funny. It would be wonderful if I could cartoon like Seraphine at Encore Seraphine or Kathie at Crazy Irish Chick but those talents aren't part of my repertoire much as I admire them. Scarlet at Nvisiblewmn is hilarious when she gets on a roll and although I've had my own semi-disastrous dental appointments I've been too traumatized and angry afterwards to write anything amusing that everybody could relate to. Gary at Withinsight has a gentle and lovely way with his blog where everyone is welcomed and praised. How I admire that. Kalyan with his Heaven's Garden blog shows some of the most beautiful pictures and descriptions of India, its places, people and customs that one could hope to see. I used to travel a lot but was too intimidated to go that far on my own and there were too many stories about people who never came back. There are a couple of other blogs on my favorites list (and some I look at that aren't listed) and all are worthy of attention but what's my contribution going to be?

I read a lot - books as well as news and science articles - but if I want to do book reviews I can go to Amazon or Epinions (something I've been known to do). It's the same with movies and since we rarely watch first run that would be pretty boring and irrelevant. I do have a job but spend too much time there already without writing about it too. The family is very small at this point in time and members distant in the physical sense so there are no big in-house events to plan for and gifts get mailed at appropriate times. Visits are a rare delight.

A lot of the news upsets my tendency to find equilibrium but I find a need to at least witness the events of our time. Lots of times I find hopeful and challenging ones like this man who is planning to walk from Boston to Washington to convince Nancy Pelosi and the Democrats to begin impeachment proceedings against the administration immediately. Why else were they elected in 2006 if not to do that?

Yes, I tend to get as irritated as anyone else about our consumer society and the especially relentless and desperate advertising that goes on at this time of year. December has become the least likely time for us to browse our favorite bookstores, gamestores and moviestores. We've been known to have soup on Thanksgiving and Christmas Day just because we either forgot to go shopping or just couldn't bear to stand in line with people buying tons of processed junkfood. See, I'm opinionated and not always very nice. Nevertheless, I do have hopes that the current mess can be ameliorated if not completely turned around since it seems to be a natural fact that if so many people in the country are aware of the illegality of the Iraq war and all its byproducts that perhaps something will change. It would be nice if television went away so people would talk to each other, wouldn't it?

So I'll go on posting when time and inclination permit. It's never likely to be a particularly focussed blog although the idea of doing one from the point of view of someone who has been kidnapped from a sane world and dropped off on Earth at this particular time is appealing.