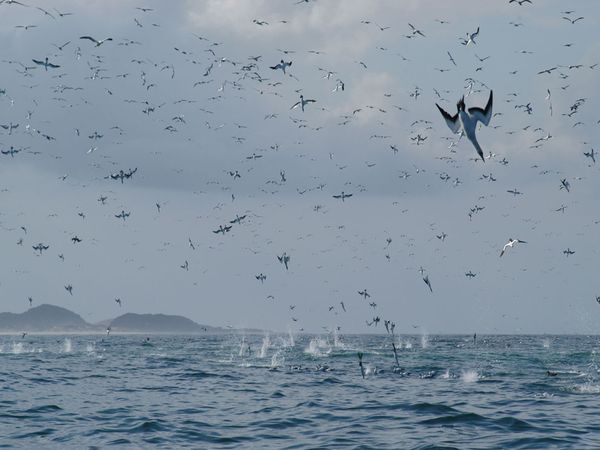 'What the hell was that?' came to both our lips this morning as we walked alongside the Eastern Passage part of our park walk. What we'd both seen was a group of large seabirds diving head first into the deep channel from high in the air. Even to a city girl like me it was obvious they were out there fishing and that these were no ordinary seagulls. Seagulls will skim the waves or sometimes dive like ducks from the surface but you never see them do anything so rash as powering straight down like WWII kamikazes. Although the flock wasn't as large as this one, the birds provided enough entertainment that we sat on a rock and watched them until they flew further out to sea. Once I got home it didn't take much google time to discover they were gannets - white birds with yellow heads, black wing tips, and an eighty inch wingspan. They aren't seen around here very often but they do nest in Newfoundland and Labrador.

Although Halifax really isn't a very big city when compared to places like Toronto, Boston, or London, in these parts it's the biggest urban area to be found for hundreds of miles (or kilometers as many people here describe distance). In the US you can go for long road trips through some pretty desolate reaches but so long as you stay on the main highways you know there'll be one of those food and fuel signs not too far away. That's not at all necessarily true on this side of the border. Canada is huge and only very well populated close to its southern edge. Things can get pretty wild once you venture away from the populous areas. 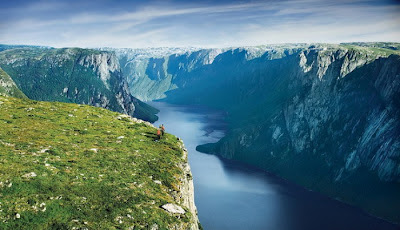 Our unexpected sight of gannets made me think again just how neat it would be to visit Newfoundland and Labrador. Up to now we haven't made any trips out of town that didn't allow us time enough to get home by the end of the day. Once we've moved (in just about a month) and settled in, perhaps we'll plan that trip for next summer. Apparently it takes 5 hours to drive from here to North Sydney on Cape Breton Island. Goodness knows it would be tempting enough to stay there for a while but the plan would be to go to Newfoundland - a six hour ferry ride to Argentia on the eastern shore. From there I haven't yet begun to imagine - never mind plan but thousands of gannets and kiitiwakes nest at a place called Cape St. Mary. Viewing the birds requires standing at the edge of a cliff (the local rule is to beware of fog and slippery grass) where you can watch them flying back and forth from their 300 foot tall nesting rock. 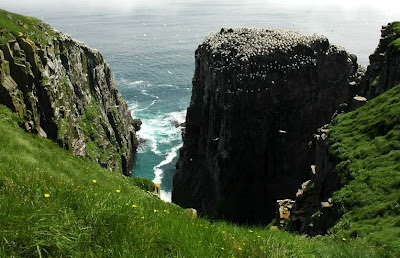 It sounds pretty nice, doesn't it? Yet on a scale of 1 to 10 when it comes to hiking and camping, we'd be at level minus 1. Walking is good - hiking requires much extra effort. At least we know that much. Then there's that ferry:

If you're interested in seeing a 10 minute video I found made by someone who spent two weeks traveling in Newfoundland you can see it here (it picks up after the first 90 sec). Ever since I read the book 'Shipping News' by E. Annie Proulx I've wanted to see the place myself. The movie got worse reviews than it deserved but watching it is still a pleasant way to spend a few hours.

When we go I hope Crow will be here to accompany us. He'd love cliff diving. Me, not so much.

Are there any places you dream of seeing?
♡