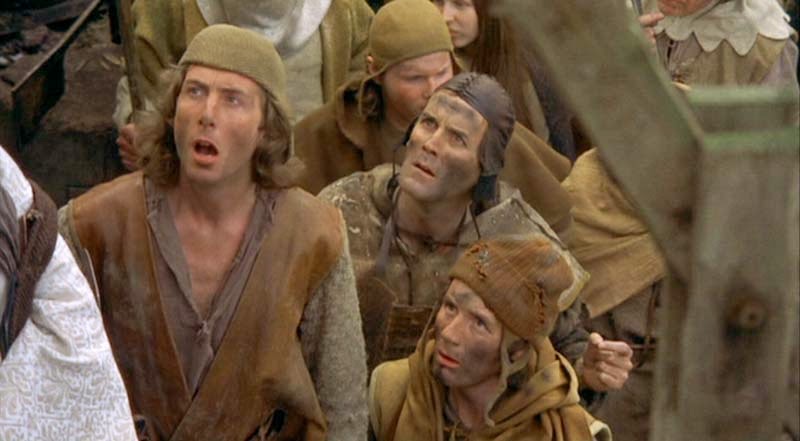 The following snippets about the 1500s may or may not be true, but whether they are or not, I'm happy to be here and now rather than there and then:

Most people got married in June because they took their yearly bath in May and still generally smelled decent by June. However, they were starting to smell a bit so brides carried a bouquet of flowers to hide the body odour. That's where the custom came from.

When taking a bath the man of the house had first privilege of the big tub of hot, clean water. After him the other sons and menfolk bathed, followed by the women and finally the children - last of all the babies. By then the water was so dirty you could actually lose someone in it. Hence the saying, "Don't throw the baby out with the bath water."

Did you ever wonder where the term 'raining cats and dogs' came from? It turns out small animals often slept in the straw of thatched roofs. When it rained it sometimes became slippery enough that they fell off.

The fact there was nothing to stop things from falling from the thatched roof into the rooms of the house posed a real problem in the bedroom where bugs and other droppings could make a nasty mess on the bed. Then someone came up with the idea of making tall posts with a cloth hung over the top for some protection. Apparently, that's how canopy beds came into existence.

Most people had floors made from compressed dirt. Only the wealthy had something other than dirt and looked down on others, who they said, were 'dirt poor'. The wealthy had slate floors but these would get slippery in the winter when wet, so they spread thresh (straw) on the floor to help keep their footing. As the winter wore on, they kept adding more thresh until opening the door would let it all start slipping outside. A piece of wood placed in the entranceway made a 'thresh hold'.

Sometimes poorer people could obtain pork, which made them feel quite special. When visitors came over, they would hang up their bacon to show off. It was a sign of wealth that a man 'could bring home the bacon'. After cutting off a little to share with guests they would all sit around and 'chew the fat'.

Bread was divided according to status. Workers got the burnt bottom of the loaf, the family got the middle, and guests got the top, or 'upper crust'.

Lead cups were used for ale or whisky - a chemical combination that would sometimes knock a person out for a long time. As often as not being taken for dead they were laid out on the kitchen table for a couple of days where the family gathered around to eat and drink while waiting to see if they would wake up. This lead to the custom of holding a 'wake'.

England being old and small, places to bury people often ran short. After a certain time had passed coffins were dug up and the bones were taken to a 'bone house' for storage in order that the grave could be reused. When reopening these coffins, 1 out of 25 of them were found to have scratch marks on the inside indicating they had been burying people alive. In order to prevent future incidents they thought to tie a string on the wrist of the corpse, lead it through the coffin and up through the ground and tie it to a bell. Someone would have to sit out in the graveyard all night (the 'graveyard shift') to listen for the bell; thus, someone could be 'saved by the bell'.

and now for something not so completely different - but still relevant: