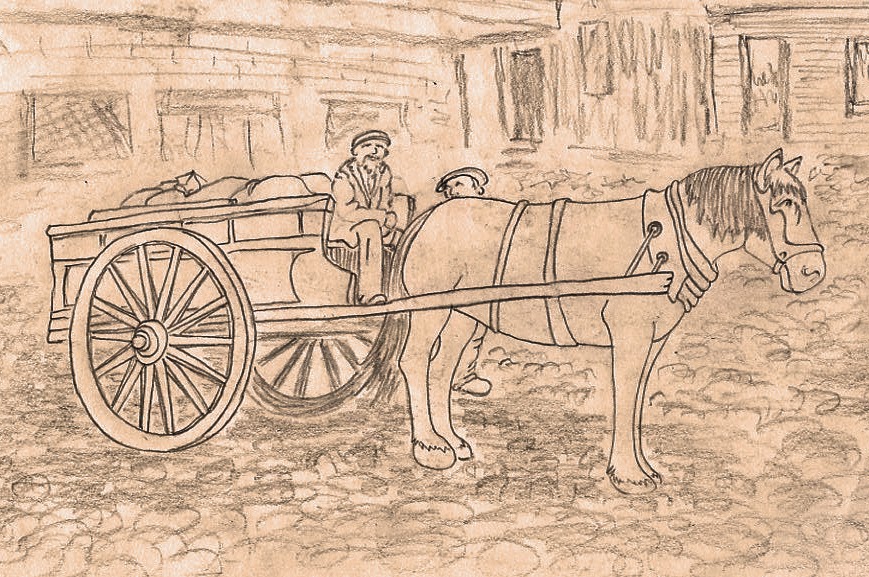 My dad was a great storyteller and this is one of his I remember from long ago. Just to give you some background, at the age when most of us were dreading our first day at high school my dad went to work in one of the coal mines of northern England. He would certainly have preferred to stay in school but, as the eldest boy once his father had died, the mines were the only place to earn money enough to feed his mother, sisters and brother.

Anyway, this story is about a man and his pony who lived in the village just before the turn of the 19th century - so likely a story my father had heard rather than one he witnessed. The man was a tinker who spent his days going round the local villages fixing things that were broken as well as buying and selling whatever came to hand. There's nothing odd in that but what was strange was that so long as the tinker himself was sitting on the cart bench his horse went to whatever village he knew to be next. The tinker never used reins. If he decided to go to a different village he simply told the horse which one and off they'd go.

In those days the miners worked six and a half days a week with just the morning off on Sunday so they could attend church. Not surprisingly, they gathered at the local pub on Saturday nights to relax and enjoy themselves. (I'm guessing not all made it to the services next morning.) Normally his horse was well cared for except for those Saturday nights the tinker spent in the pub while his horse waited patiently outside. What invariably used to happen was that the tinker would get very drunk, so much so that all he could do at the end of the evening was to climb onto his cart where he'd fall asleep. The horse could be relied upon to take him home.

Late one night when the pub had closed some of his co-revellers followed behind the horse and cart that was carrying the drunken tinker. The horse stopped in front of the dark house (the tinker lived alone). The men had decided to play a trick on the tinker. They lifted him off the cart and put him down in a comfortable spot, then they unhitched the horse. After that they took the wheels off the cart, lead the horse into the house, carried the unwheeled cart inside, put the wheels back on, hitched up the horse to the cart and, lastly, carried the unconscious tinker inside and put him back on the bench.

Next morning when he awoke they all just happened to be waiting not far from the tinker's door. He came outside rubbing his eyes and said, 'Ah elwis knew pit wes a clivvor cuddy but ah nivvor knew ha bloody clivvor til neeo.'
(I always knew he was a clever horse but I never knew how bloody clever until now.)
♡