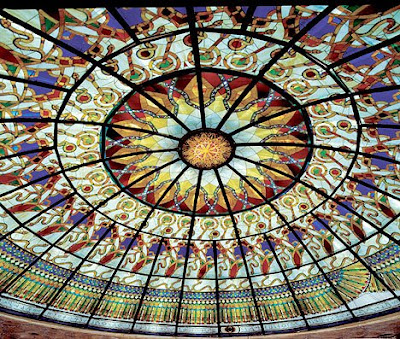 I wonder if I'm the only one who never heard of Damanhur. (Click on the Temples) Just a few days ago I came across a reference to a group known as Damanhurians and thought it must have been some imaginary literary utopia but, being curious, I did a search and found there really is such a community in northern Italy about 30 miles from Turin.

Oberto Airaudi was a young boy with an amazing gift for remote viewing who saw temples and a highly evolved community of people living in harmony. In 1977, having become successful in business, he went looking for a place that would suit his vision and found a remote hillside that felt right. He and a group of friends moved into the house on the property and started digging. This went on in 4 hour shifts for 16 years until the Italian police decided to raid the place and threatened to blow up the mountain if they weren't shown what was going on. You can read here about how it happened and what they found. At last count there were nearly a quarter of a million people actively involved.

Or perhaps you might enjoy seeing the only video (in English) I was able to find. It might look a little strange or even corny but there's something like a hint of the beginning of a better way of being and living in this world. I like to think that ultimately we'll get beyond the roadblocks. We're dreamers, after all, aren't we?