not just for birds 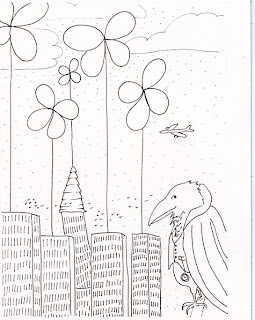 This is a picture drawn by my great nephew Irwin who's trying his best to be a chip off the old block. He has a way to go yet but you can see he has the general idea.

He flew in from the east coast last night excited to tell us about one of the latest developments in green technology. It seems some people with a little more foresight than appears to be the norm realized that if you can get electricity from wind power by having turbines on the ground, imagine how much more you could get by sticking them way up in the air.. like 20 to 40 thousand feet up in the air where the wind really blows.

According to Irwin these scientists and engineers have decided NYC is a goldmine of stratospheric wind power. That is where Goldman Sachs is headquartered, isn't it? I'd like to suggest they take a reading of hot air currents over Washington DC too but New York will do for a start. For those of you who prefer to watch he brought an old video explanation of the process he found in a second hand shop on 42nd St:

Now we have to go out and find the youngster a decent pair of Crow boots. I can't have a great nephew of mine running around bare clawed. It's embarrassing.
Posted by Crow at 8:19 PM