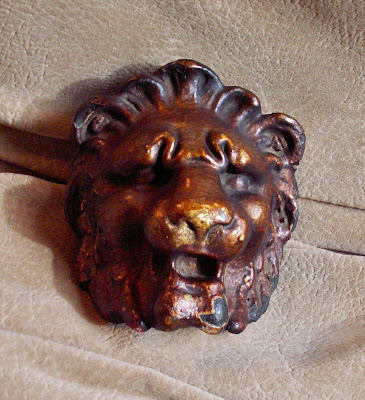 Not long ago, one of my favorite artist bloggers, Marja-Leena Rathje, posted some beautiful photographs of small, frequently unnoticed details among the larger and more obvious charms of Paris. Her incredible eye for detail is one of the many reasons I like to visit her site often. One of those pictures reminded me of a little story of my own that I mentioned to her in a comment. She asked me to show her the result so this picture is first of all for her but I'll tell you the story too.

When I was still quite young back in 1958, my mother took me for a three month trip to England to visit the family. We stayed for a couple of weeks with an aunt and uncle who lived in London and while there it was of course necessary to go to Buckingham Palace to see the changing of the Guard. After one group of equal sized soldiers wearing bright red coats, black trousers and tall bear skin hats had replaced the last batch I left the grownups so I could get a closer look at the palace through the tall iron railings of the main gate. I was also hoping to get a glimpse of the golden Coronation Carriage I'd seen so often in pictures or perhaps the Queen would come out for a stroll with Prince Charles and they would recognize my royal qualities and invite us all in for tea. I was a very romantic and imaginative child.

What happened instead was that I noticed a gold plated lion's head about the size of an adult's fist that was part of the gate and reached up and touched it. I swear it was just a gentle touch with one finger but the next thing I knew it had fallen and I caught it. I was terrified one of those Guards would clamp his hand on my shoulder and lock me away in the Tower of London for the rest of my life. I turned in shock to look where my mother was standing with my aunt and uncle and never in my short life had I felt so far from safety. Then my uncle, a quick thinking man, ran over, grabbed the little lion's head and wrapped it in his raincoat before the nearest Guard had turned for his return trip marching up and down the square.

I brought it home nicely packed in my suitcase and I've had it ever since. If you look at the back it's easy to see it had been hanging on the gate by only one rusted out screw. I wonder if I mailed it back if the Queen might be so grateful she'd invite us for tea? It seems I'm still a romantic even after all this time.

But please don't mention this to anyone since I still worry about the Tower.
Posted by susan at 10:03 PM