Considering the fact we just moved another step into the future I thought I'd take one more quick peek into the past to see what it was supposed to by by now. In the 1970's lots of people were very excited by the possibilities that had been made to seem reasonable by the moon landings. The ideas are still far from dead but for the most part they have been either forgotten (ie, by NASA which has become very much a political entity) or simply tossed into the sci-fi 'how could they have been so dumb?' trash heap. Still, it's worth noting there were some very fine minds devoted envisioning how humans could live and work in space colonies as early as 1990 (!).

One of them was Princeton physicist Gerard K. O'Neill who developed the concept of the O'Neill Cylinder with 'Island 3' envisioned as pairs of large rotating space habitats with an Earth-like environment on the inner surfaces with artificial gravity produced by the rotation. O'Neill was one of the first people to ask the question: given current technology (in 1969), how large could such a structure be built in zero gravity? When the calculations came back with an answer in the tens of miles, O'Neill knew he'd found something significant. A key idea in his thinking was that such large structures could be built out of material mined from the Moon or asteroids to avoid the high cost of launching out of Earth's much larger gravity well. The configuration consists of a pair of cylinders, each 20 miles long and 4 miles in diameter. Each cylinder has three land areas alternating with three windows, and three mirrors that open and close to form a day-night cycle inside. The total land area inside a pair of cylinders is about 500 square miles and can house several million people. The cylinders are always in pairs which rotate in opposite directions, canceling out any gyroscopic effect that would otherwise make it difficult to keep them aimed toward the sun.

In 1973, George Hazelrigg, also of Princeton, suggested to O'Neill that the L4 and L5 Lagrangian liberation points might be ideal locations for the large habitats that O'Neill envisioned. L4 and L5 are points of gravitational equilibrium located on the Moon's orbit at equal distances from both the Earth and the Moon. An object placed in orbit around L5 (or L4) would remain there indefinitely without having to expend fuel to keep it in position. Since the orbit around L5 has an average radius of about 90,000 miles there's room for a very large number of space settlements even at this one location. 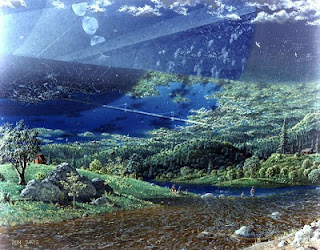 Abundant solar energy and large amounts of matter from the Moon are keys to successfully establishing a community in space. Not only does the sunshine foster agriculture of unusual productivity, but also it provides energy for industries needed by the colony. Using solar energy to generate electricity and to power solar furnaces the colonists could refine aluminum, titanium and silicon from lunar ores shippped inexpensively into space. With these materials they would be able to manufacture satellite solar power stations and even more new colonies. Power stations would be placed in orbit around the Earth to which they could deliver pretty much limitless electrical energy. In the 60's neither an energy crisis or global climate change had been imagined. Now we're very close to having reached the limit of what the planet will bear from our continued use of fossil fuels so the economic value of space power stations would go far to justify the existence of the colony and the construction of more colonies.

In his 1973 science fiction novel Rendezvous with Rama, Arthur C. Clarke provided a vivid description of a rotating cylindrical spaceship that is about 50% larger than the classic 20-mile long O'Neill Cylinder. Artist Eric Bruneton has created this striking 3D animation of Rama.

In a caption under the famous drawing of an O'Neill cylinder it says, “Human colonies in space — not a luxury, but a necessity. Earth is overcrowded, running out of raw materials, in desperate need of a growing energy supply, and being ecologically destroyed. The problems are worse with each passing day, and there are no solutions to be found on Earth itself. Mankind's destiny — its very survival — is in space.… But a commitment is needed, a decision to go for it and the determination to see it through.”

O'Neill died from leukemia in 1992 but there are still those who continue to be energized by his dreams of a future we could make happen. Of course, it wouldn't be easy but I believe a collective vision is one we need if we're to have any future at all. We have the brains, we have the capacity - all we need is to get our collective heads on straight.
Posted by susan at 3:18 PM